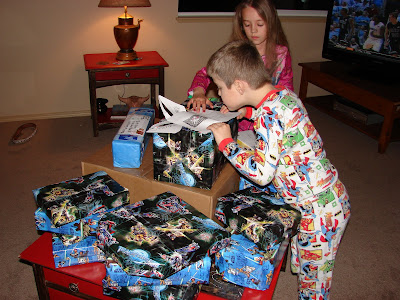 Britt is reading his birthday card from Brailey Shaye, which she made for him. Look at all those presents! No, he isn't spoiled. Rotten, at least... 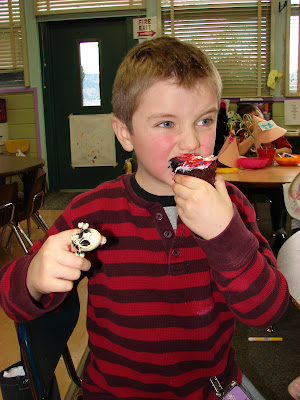 Enjoying his Pirates of the Caribbean cupcake at school, where his classmates sang him "Happy Birthday." 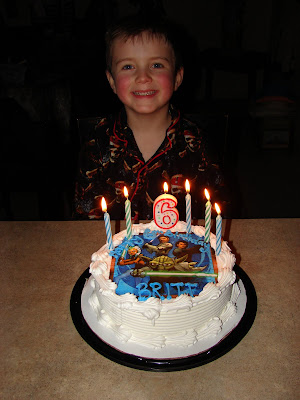 And at home with his Star Wars ice cream birthday cake. He had wanted Star Wars cupcakes, but nobody in town had them, so we had to go with the pirates. He did not believe he was "6" until he blew out the candles and had cake. We argued about this throughout the day, and then, once he was done eating his cake, he said, "Now I'm finally six!" 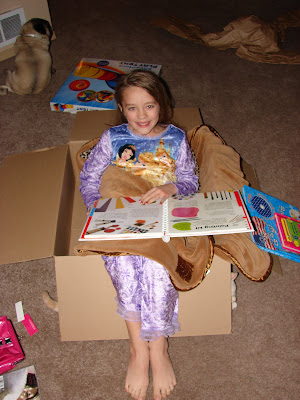 The wonderful big sister in a box that held the super cool present from Aunti Nicoley. As you can see, she was quite comfortable!

And now, the story of Britt turning six...
Yesterday, much to my heartache and joy (yes, you read that correctly), my Brittster Man turned SIX YEARS OLD. How did this happen?! I am always thrilled to celebrate my kiddos' birthdays, and I love to buy them presents and cakes and to make it the most special of all days, BUT (you knew that was coming, didn't you?) it just breaks my heart to have them turn another year older... I can barely wrap my mind around the fact that Britt came into our lives six years ago. It seems like it was just yesterday. And then again, it seems like he's been with us forever. I'm telling you, I cherish every single day of my little B's lives. And my time with them still goes by too fast..
He had a great birthday, though, and he told me it was the "greatest one he's ever had!" We toned it down, this year, and didn't do a big "kid" party, and you know what? It was really nice! No stress, no fuss! Just the 4 of us. And a whole lot of love and fun and wonderfulness!
Last night when we were sharing the best part of our day over his ice cream birthday cake, I said that the best part of mine was his birthday and then I described all the things about it I enjoyed. Britt had been the first one to share, but after I was finished, he said, "Awwwwww, thanks Mom! And I have one more best part of my day to share - Mom sharing the best part of her day." So sweeeeeeeeeeeeeeeet! Brady rolled his eyes and said, "Oh my gosh he's got the charm." Well where does Brady think Britt gets that from, anyway? He's just like his daddy!
Alas, birthday number six was a great success! And if my heart is a little heavy, that's okay. The joy of having my two little B's outweighs everything.
at February 12, 2010