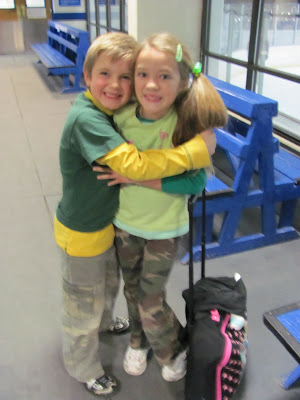 Here are my two little Leprechauns! I thought it was pretty cute they both wore camo as part of their green for St. Patty's Day. This picture is especially darling if you are their mother, because I know all the details - like the fact that Britt loves to grab his sister and hug her and how she doesn't love that and tries to push him away. He also loves to tease her with his kisses by trying to lay a big one on her, which she does not appreciate at all. And what makes it even funnier is the fact that Britt has become the stronger of the two of them. I only hope he continues to give his "love" to just Brailey Shaye and I, though. 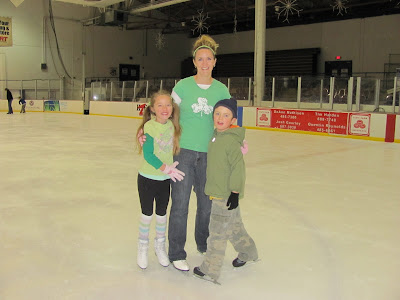 And here I am, Big Mama, the "Queen B," with my two little skater B's. Brailey Shaye's ice coach, Alli Jo, took this picture for us. Brailey Shaye was skating circles around me, trying to have me do all her moves. Britt and I just skate around the rink and watch her do her tricks. He has learned how to skate pretty darn well over the past couple of months. I'm so proud of both of them - gee...! I bet you didn't know that, did you? 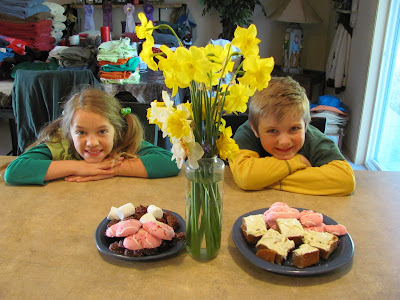 Britt has learned from his sister, and he decided we needed to have a St. Patrick's Day party. So the second we got home, they made decorations, got these dessert plates together and planned activities for us to enjoy. The daffodils are more from the neighbor's yard that she let Brailey pick (and these particular ones smell so delicious!). 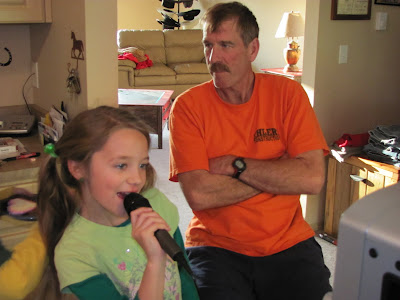 And one those aforementioned special activities was a "Karaoke Contest," which only Brailey and I participated in. Brady sat there as long as he could, but as you can see, he was not feeling well at all. He was sick for most of the week, the poor guy. But you can tell how much fun Brailey Shaye was having. Britt enjoyed it, as well, by doing the "limbo" underneath the microphone cord while we were singing. 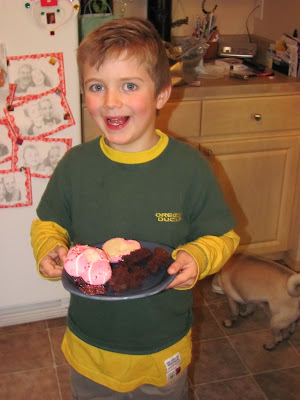 And here is the little Leprechaun Party Planner himself, with his plate of goodies he had his sister prepare. And yes, we did have dessert before we had dinner, and then we had dessert after dinner, as well. I mean, come on! It was a PARTY! St. Patrick's Day, 4 B's style. OH yah!
at March 19, 2010