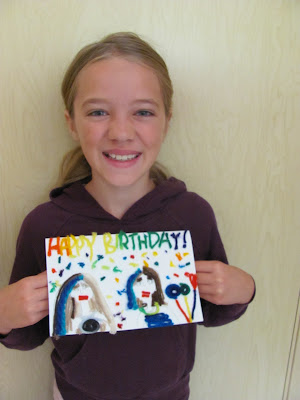 This is a fun birthday card Brailey made for her bestie, Jaden. One day she started creating pictures out of pieces of yarn (my innovative little ar-teeeeest!), and so I told her to make a card for Jaden doing that same thing, and this is the fabulous creation she came up with. I think it is adorable! She was kind of under the weather when I took this picture, but I had to get a good shot of the masterpiece before we gave it away. 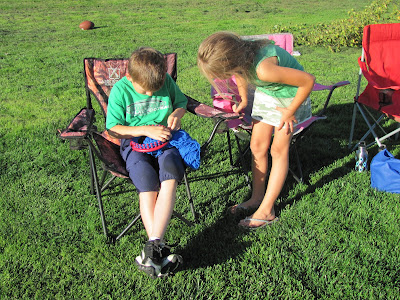 And here we have Brailey teaching Quincy how to do the Knifty Knitter... Through Britt's football, I have met yet another knitter, and we have become fast friends! She taught me how to use the Knifty Knitter to make hats, and from that, it has spread like wildfire! Brailey is working on a hat, Britt wants to learn, and my Twin, Little Mama, got a set of the "Nifty" looms, which inspired her own mother to get a set, and Kimmy and her mom are master knitters, so you know how great the Nifty Knitters are! So anyway, one day at the beginning of Britt's practice, which is before Quincy's, he saw Brailey working on her hat and he said, "I want to learn how to do that." And so Brailey taught him, right then and there!. And he worked on it up until the time he had to go to his own practice. Is that adorable or what?! And when his little brother Brody and Britt came over to get a drink of water, they saw Quincy and guess what they said? Brody said, "Hey! I want to learn how to do that, too!" And Britt said very matter of factly, "Yah, I'm going to learn." And their super tough football buddy Owen, whose mother is the new knitting friend that started the entire craze, stood and drank his water, observing and processing the whole scene. I wonder if he might dare to give it a try, too? Is that hilarious or what?! Tough little football boys learning to knit hats... I love it! And by the way? My uncle was one of the best knitters on the planet! 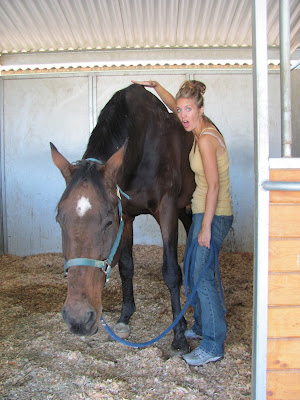 And this is a silly picture of me being a dork... I had Brailey take this picture, because this horse is SO TALL! He is pure Thouroughbred, an old man, who was used for jumping back in his "Hey Day," and his whithers (the top of his shoulders) are as tall as the top of my head! No warm blood or draft horse blood in this guy, either, and he's that tall! And he's a sweetie boy, too. Like Britt, a "gentle giant!" Anyway, just something fun to throw in the hodge podge of pictures... To make you smile!
at October 06, 2010