"The Best Halloween Ever!" 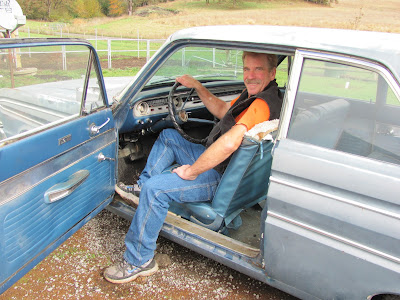 The 4 B's had another fabulous weekend, and a long one, too! We attended Parent Teacher Conferences on Wednesday, and then had Thursday and Friday off from school, which was SO NICE! We went to work with Brady on Friday, and we found this fun car for Brady to pose in. Still handsome after all these years...! The car too, but I was referring to Brady. (Gotcha!) 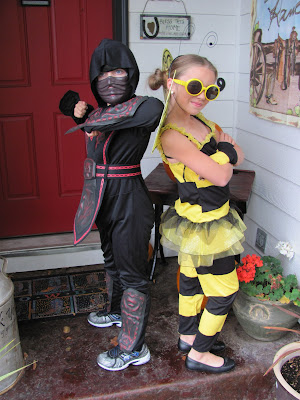 On Saturday, we were fortunate to be invited to our FIRST HALLOWEEN PARTY EVER, and it was the most wonderful Halloween party you could ever IMAGINE. We had a BLAST! It was truly a special time, and we enjoyed every single second. Afterwards, we went to mass and the little B's were in their costumes, along with our other Catholic friends who attended the party. 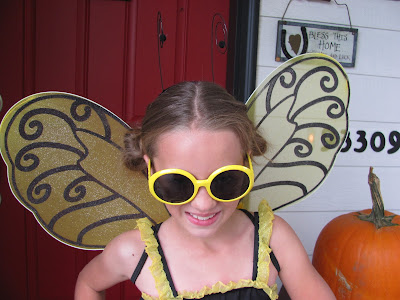 Brailey was a bumble bee, or, as the costume is called, "Little Honey." So perfect for her, because she IS such a little honey. SO sweet...! 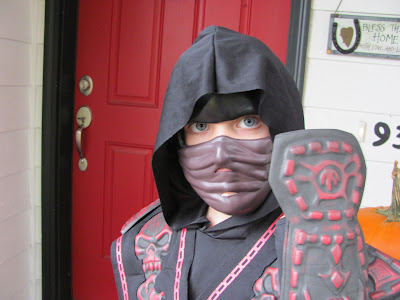 And Brittster Man was a skull ninja... He started determining what he would be for Halloween months ago - this is his favorite holiday (just like his Aunti Nicoley!). 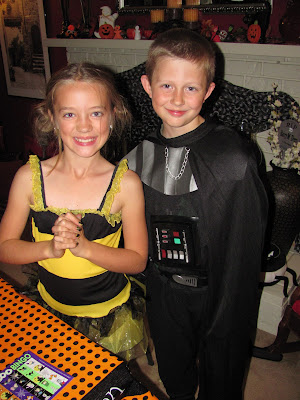 This is Brailey with one of her dearest, bestest friends in the world, Jonah. They are GREAT buddies and although they didn't get placed in the same classroom this year, they play together every day at the lunch recess. He is the NICEST BOY EVER, and Brady and I are so thrilled Brailey has him to look out for her. After I took this picture, I said, "Man, Jonah, you are growing tall!" And he said, "No, I just have these cowboy boots on today," and proceeded to show them to me. It makes me smile to remember it as I am writing this... 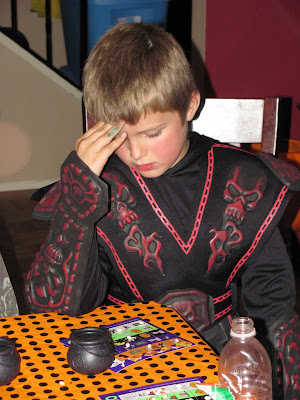 There were crafts, games and food galore at the party, but the biggest hit was Boo Bingo, and I was cracking up at how serious all the kiddos were. It was hilarious to listen to! It reminded me of older people playing it... Truly, this was hysterical to observe. 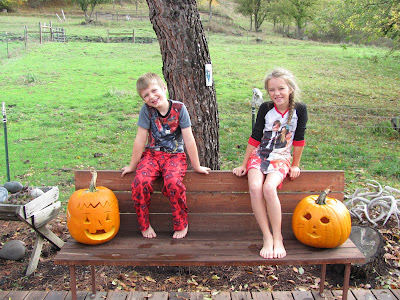 This year, we carved our best pumpkins ever! We carved them yesterday morning, which started off our "best Halloween ever." Brady has the perfect pumpkin carving tools, and the kids were very creative this year, and look at the masterpieces we produced! Britt's is a Frankenstein, and Brailey's is a kitty cat. 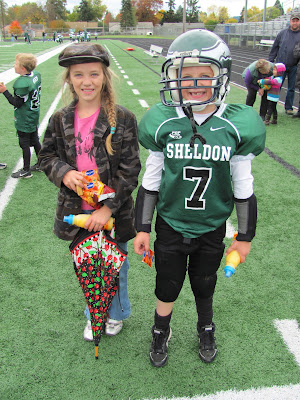 See that smile full of pride? That's because Britt made his FIRST TACKLE  IN A GAME! It was so awesome, and he was so thrilled! He is figuring out how to use his size and strength, and it was so special to see how happy he was after he made his tackle in the game. He was thrilled that it all happened on Halloween, which of course added to it being "the best Halloween ever." He called Papa to tell him, and Papa is buying him another hot fudge sundae after Thanksgiving to celebrate the accomplishment. This made Brailey Shaye very happy, as well, of course, because nobody loves a hot fudge sundae like she does. 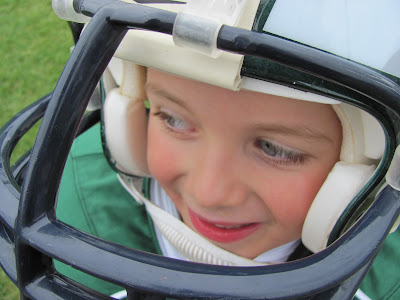 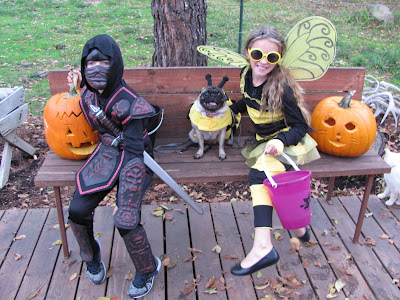 We picked up this little bee costume for Rosin last year on clearance, and since Brailey was a bee, we had a little theme going on and took Rozzy-dog trick-or-treating for the first time. Not only did Rosin enjoy it, so did everyone who saw her. It was fun! 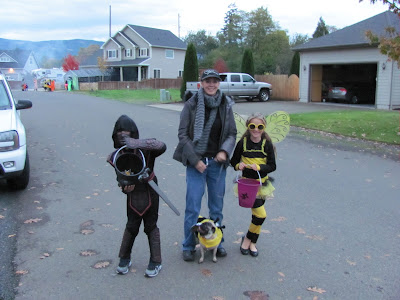 Here I am with my babies! I am SO the luckiest mother on the planet - I love these three babies! 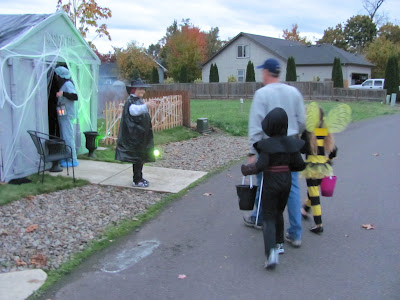 This was the funniest part of the day, because this house always gets into the spirit of Halloween and does fun things like this... They had a little tent they made out of black plastic with loud Halloween music, and they stood out front and waved people to come in. It was hilarious! Britt could not WAIT to go to this house. Until right when he was going in! Brailey went in with Brady, and Britt hightailed it the other direction. Something about it got his goose, and he was terrified! So we had a big time teasing him about it the rest of the night - he is always our brave child, so we were stunned. Brady told him he's been eating too much chicken, and I told him I knew what he could be for Halloween next year, a Chicken Ninja. Britt didn't think it was too funny, but the rest of us B's howled with laughter, and Britt had to laugh at himself. After this, he was too scared to go to any other houses - thank goodness we had saved the spooky one for the end, or he would have been candyless. On the way to school this morning, he was quizzing Brailey about what was inside there... 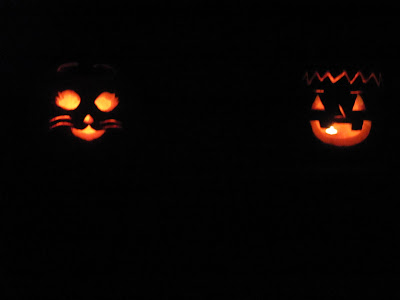 Our adorable jack-o-lanterns... Truly, the little B's are right. It was the best Halloween ever!