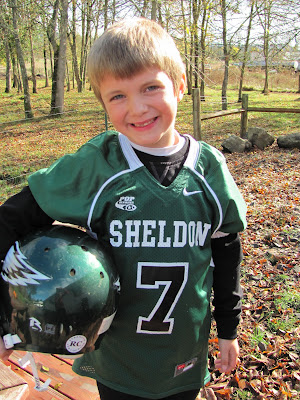 Our little football superstar, number 7, BRITT MURRAY! I took this picture of him right before we left the house for his last game of the season. One of a handful of brief glimpses of sunshine we had all day... Isn't he just so damn cute?! His team played a "real game" with flags and markers and quarters and the "whole nine yards," and it was super cool. The only fly in the ointment was the weather... Thank goodness the spectators were under cover, because it poured down rain almost the entire game! Britt made some fantastic blocks, though, and even though he was an ice cube, he was thrilled with himself afterwards. 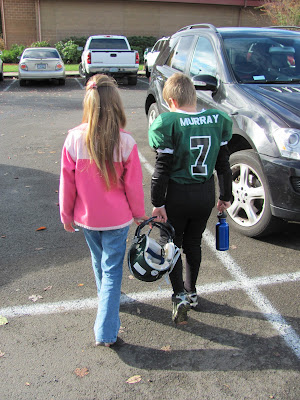 Big sister Shaye-Shaye helping him carry his helmut to the game - I swear, they are the cutest, closest siblings on the PLANET! 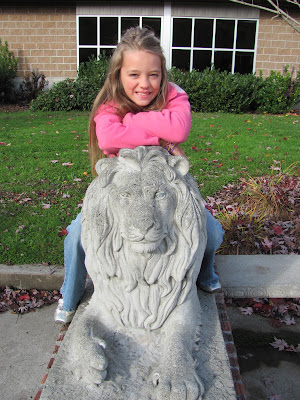 Brailey wanted to pose on this lion outside the field - obviously we played the "Lions." 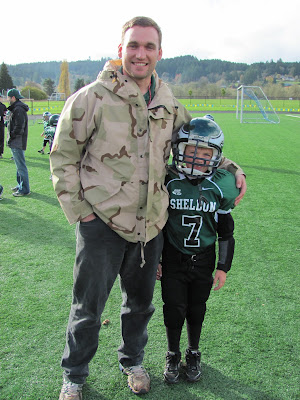 This is one of Britt's favorite coaches, Coach Micah. He was so good to Britt all season long, and very inspirational to the entire team. He has a lot of enthusiasm for life and his happiness is contagious. He served our county for years and was last stationed in Iraq, but injury sent him home. We are grateful to Micah for all he did for us as Americans and as Eagles! 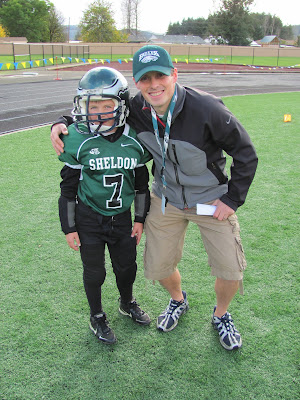 And this is Britt's Head Coach, Jeremy, who was truly phenomenal. He was a fantastic head coach, and we are hopeful Britt will be placed on his team next year! 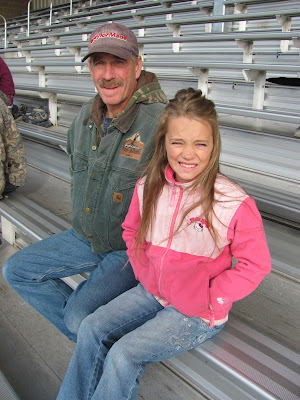 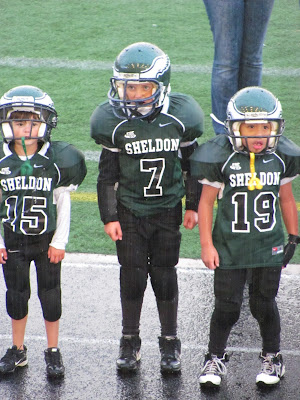 All the players were presented with medals after the game, which was so cool for them, except for the fact that they were all freezing and had to stand in the pouring down rain while all their names and numbers were called... What can we say? The weather did NOT cooperate! 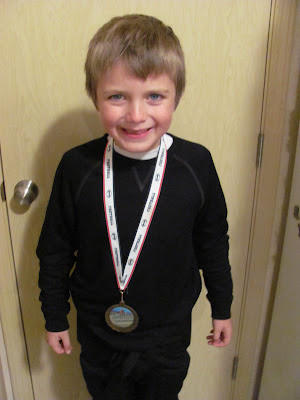 And my little frozen boy with this medal, just after we got home and right before he got in the shower. He was soaked all the way to his bones! But oh-so-proud of that medal... It was a fabulous season, and we're so proud of Britt for all he learned and accomplished, and now we can't wait for next football season! There's just nothing like football, is there? In the meantime, we've already started basketball and volleyball. It's busy times for the 4 B's!

Jumping up and down in the rain to stay warm...

While receiving his Tiny Mite Bowl medal.  A moment in time that would be special on an ordinary day, but is extraordinatory given Mother Nature's contribution.
at November 08, 2010