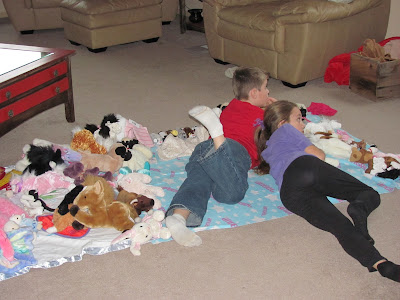 This is what I found, one afternoon after school on a rainy day, and I thought it was so adorable, I captured it on film to remember forever and ever and ever... See what good buddies they are? The two B's and all their "friends," enjoying a little t.v. time.

We discovered a new television station this winter, which is a pretty big deal, because I don't let my little B's have very much screen time at all. But since coming across the Eugene PBS Kids station, I have realized we can all be happy with their shows. And the best part is, they are educational! My B's actually learn about reading and science and animals and biographies and all sorts of awesome stuff. We're hooked! My personal favorite is Word Girl, because I like her song... "Word up, it's Word Girl!" And I also love The Electric Company. And The Cat in the Hat Knows A Lot... And Fetch! with Ruff Ruffman is so fun - both B's want to be on that show, one day. Actually, truth be told, I like all of the shows!

So anyway, every now and then, I let them sit and watch the shows and I don't feel guilty, because I know they are learning something fun. A win-win situation all around, don't you think?
at March 08, 2011