I felt Brailey's birthday deserved some further exploration and detailed description. The way Brailey was treated on her birthday just goes to show how very special she is, not only to me, but to other people as well, and since this blog is a dedication to my children, why not document it, right? Besides, I think you'll find the details quite entertaining! 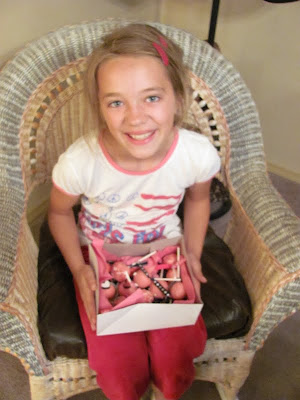 See that happy face? I had a clearer picture I could have posted, but the flash didn't capture the glow of her pride like this shot did... She is holding the famous cake balls/pops that were actually her favorite birthday gift! The lady who made these, Renee, is truly amazing - I wrote about her in my Amazing Allies post. She brought these to Brailey after school on Friday, along with a gift from her boys, Nick and Ryan, who are two of Brailey and Britt's best friends. My parents came over for the weekend, and they were barely able to get out of their car before Brailey was showing them these adorable, Barbie pink cake pops. Brailey told Papa he could "look at them, but don't eat them until after dinner!" So of course my dad had to tease her and reach his arms around to pretend he was going to steal one... We also had a couple of Brady's friends down for the evening, and so Brailey was very excited to share her special treats with everyone. She carefully distributed them out, and we could pick whatever one we wanted, as long as it didn't have a heart on it. Papa was the last person to be served, and he said, "Which one do YOU want, Brailey Shaye?" And so she picked hers out, and then he teased her some more and said, "Okay! I'll just have all of these, then." He pretended to take the entire box, which got a ton of giggles and a big raise. And the present from Nick and Ryan was so cool - it was wrapped in Barbie pink paper with a gorgeous pink zebra ribbon that Brailey admired on the birthday table all weekend long, until first thing Monday morning, when she opened it. "It" was a News Anchor Barbie! This is so awesome, because number one, Renee IS a news anchor, and the best one in town, too. Number two, Brailey's class went to the news station where Renee works and watched her give a live broadcast about three weeks ago. They toured the building and were even on the end of the show! It was super cool. Number three, Brailey's class has been giving daily news reports every morning, microphone in hand and all. So you can see why the News Anchor Barbie was so precious to Brailey... It was a special, generous gift, and it made Brailey very happy.