A Lawn Is Born

For three years, we have been wanting to get the lawn around our house in. While this might seem a bit ridiculous or paint us as lazy to some people, if you've ever been to our place, then you know there is "more to the story..." For one thing, Brady and I aren't the kind of people to let things go. We get things done, so it has been completely unlike us and frankly very difficult to not be able to get our lawn in. Would you like to know the rest of the story? Good, because you know I'm going to tell you.

Over the course of building our house, Brady and I learned some invaluable lessons, the most important one being to never, ever, under any circumstances, hire your friends to do work for you, and even more important than that, never, ever, EVER pay someone, friend or not, until the job is D-O-N-E. And when I say done, I mean completely finished. All the way. To the end.

Can you see where this is going?

Yes, we naively hired one of our "friends" who was going through a dry spell in his construction business to do the excavation work for our house. He started out great guns and set our expectations high, promising us the ground around the house would be "lawn ready" when he was done, including the placement of dirt onto the rocks. That is what we paid him for. Silly us... Shortly after he finished the first portion of his work, which to be fair, was really excellent work, things started going downhill. And fast! Once we paid him the first big chunk of change, he stopped showing up, and when he did show up, it was late at night and he would do his work in the dark with a little headlight - you can imagine the quality of work this produced. He started drinking heavily and doing a few drugs (we know, because he told us about them), and lying to his wife, telling her he was here working when he wasn't, which in turn caused her to think he was doing more than his fair share of work for us. He would leave his excavator here for days at a time... The coup de grace for me was when he came to the hospital while Brady was just out of ICU but still very sick and collected even more money from us, for which he promised to finish his work, but as you can tell from the direction of the story, he did not.

This resulted in me digging through rocks to install our drain pipe for the gutters, which our "friend" had installed incorrectly, on my hands and knees, because the rocks were too heavy for me to move with a shovel. I did this frantically, trying to prevent Brady, who was fresh out the hospital, from overdoing it. It mattered not to our "friend" that Brady had narrowly escaped death, beating the odds of survival. It resulted in a war of words between the "friend" and I over the horrible job he had done not only on the drain pipe, but on the side of the yard, where he destroyed our fence by placing huge amounts of rock through the fence. And it resulted in a yard that was nowhere near "lawn ready."

You may have noticed the word "rock" in this story several times. And you may have been wondering why it was such a big deal. Well. Allow me to explain... We built our home where our double-wide trailer had sat, and unbeknownst to us, there was a whole lot of 3" rock underneath, which had to be dug out and moved. Thus, there was exactly ZIP dirt for us to plant our lawn in. But there was a few thousand tons of messy rocks. Not gravel, but rock. Thank goodness for a buddy of ours who brought his excavator over and moved things around for us - granted, he did knick our brand new siding in several places... But he moved the rock for free, and Brady was able to patch our siding up nicely. With the crash in the construction business (which meant there was no free fill dirt anywhere to be found) and the high price of mere dirt, though, the sad fact of the matter is that we were unable to get our lawn in for the past three years.

Until now! And although we had to practically break our backs to get it done, our lawn is in! Hopefully our house won't be such an oven this summer - those rocks soaked up the sun and held the heat all night long. And our little B's will be able to run their precious toes through the summer grass. We are excited! Our lawn is born...! And all those bad feelings and resentments that seemed to find their way into our minds every time we looked at our yard of rocks have been buried, quite literally, under beautiful new dirt and grass. 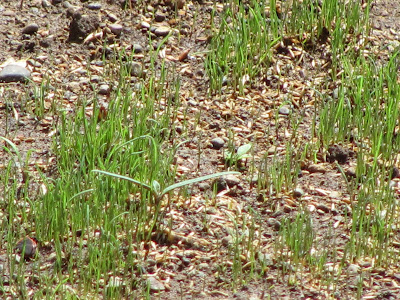 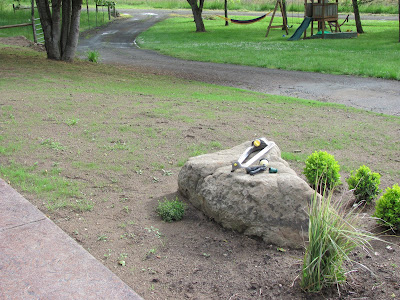