This week has been a busy one for the Tooth Fairy at The 4 B's Ranch... Two teeth in two nights, IN A ROW! First, Brailey had to go to the dentist to have a baby molar tooth pulled that was growing up instead of down and attaching to the bone. I didn't realize what a major procedure this would be. Well, not major, but more difficult than I had anticipated. She had to have deadening shots and the whole works, and even Tylenol 3 afterwards, which caused her to miss a swim lesson (bad, bad planning on Big Mama's part!). I have to say, she was quite hysterical and loopy on her pain meds, but I'm getting off track from my story. So, when she felt more normal in the afternoon, she decided to make the Tooth Fairy a nice little house to spend the night in. Hence, the scene below...

To fully understand how much we adore the Tooth Fairy, I have to back up about three weeks, when Brailey lost another tooth (her first molar, in case you were wondering). The next day, after the Tooth Fairy had visited her, she told me she actually felt the Tooth Fairy come and take her tooth! She felt her lift up her pillow to take the tooth and then lift it up again to leave the money... Can you imagine?! I asked her if she saw "her," and she said no, she just kept her eyes closed and then went to sleep. YIKES! Close call there, yah?

So we were very excited to have the Tooth Fairy come again, and Brailey spent all afternoon working on her  little Fairy House. She is quite certain the Tooth Fairy slept there, because the food she left for her was gone!

And ironically, we also think she must have loosened one of Britt's teeth during her visit, because when he woke up that same morning, he had a new wiggly tooth! And it was very, very wiggly. SO wiggly, in fact, he yanked it right out! And that was a big deal for Britt, because unlike his sister, who has pulled every single one of her teeth on her own, except for that one molar the dentist had to get, he doesn't like pulling teeth or even losing them. He would be very happy to keep all his baby teeth. That visit from the Tooth Fairy and her stay in the Tooth Fairy House must have inspired him to be braver than ever before, and wa-lah! Another visit from the blessed Tooth Fairy... Thank goodness Brailey made her that house - she probably needed a little rest after all that traveling to Coburg! 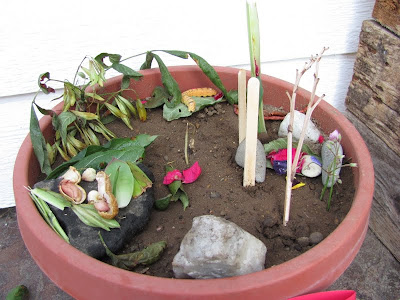 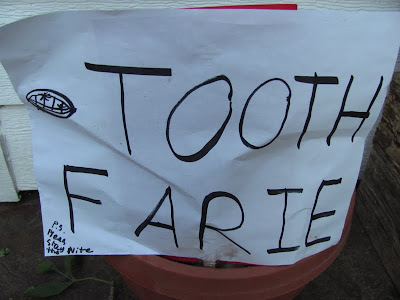 With a sign to let her know it was for her... 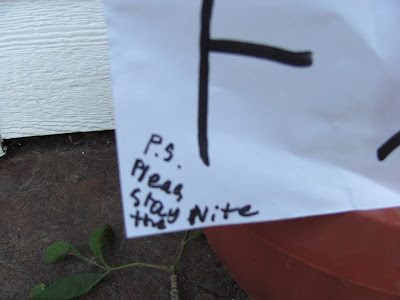 And a special invitation. 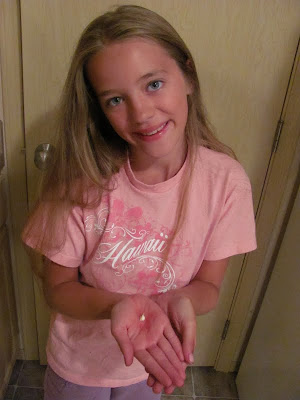 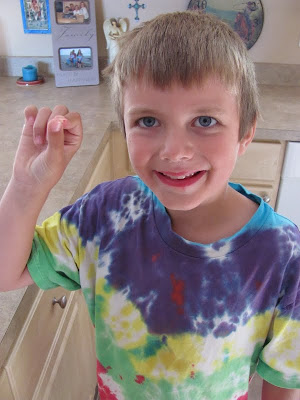