So if you've been wondering where I've BEEN the past couple of weeks (all three readers that I have - ha!), let me tell you... My computer completely DIED. And you cannot even begin to imagine the havoc a dead computer can wreak on your life. I wasn't able to email, I wasn't able to blog, I wasn't able to work and I wasn't even able to determine how much money we had in the bank! It was traumatic, I'm telling you! TRAUMATIC. So last week, I bought a new laptop, and I've been getting reconnected and updated and trying to get used to a new system for the past week, waiting for my files to be restored. In other words, playing catch up! And in the midst of all this hoopla, I'm getting ready for the Big Barn Sale, which you may have read about a couple of days ago. I've been building my inventory, and I think this is going to be the most spectacular sale in the history of barn sales, but it all takes time and energy and effort, and I finally had to just step back and let a couple of things ago. Like attending Britt's football practice... I went for one night last week, but I stayed home with Brailey the other two nights in an attempt to get caught up. It helped! But I did feel guilty - I hate to ever let my Mama's Boy down, you know... In any case, life goes on, and changes are inevitable, and even though I find change hard, I'm doing my best to keep up and adapt. 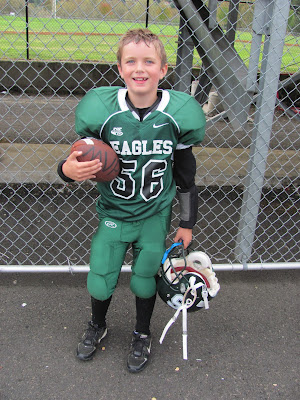 In other news, Britt was chosen as the MVP last week after his football game. This meant a LOT to him, and he was super proud. And we were all proud of him, of course! He works so hard in practice, and in fact, at one of the ones I missed last week, he was the only kid to run the proper route during their warm up time, and so all the other players had to follow him around for another lap. I told him I was so proud of him for being a true leader, because that's what leaders do - they do the right thing even when everyone else is doing the wrong thing. So he's been playing hard at playing football, and we've been enjoying the growth we see in him, as a person and as a player. 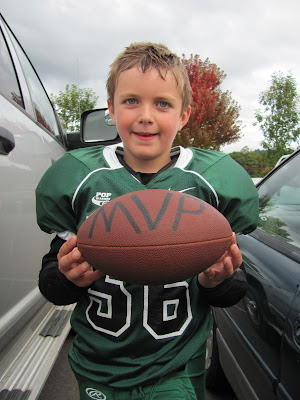 And since I have this "playing" theme going on, here is a picture I took of Kimmy and all her little girlies one night at football practice. This was the last nice day of weather we had, and so we brought along our friend Hope to play with Kimmy's Little Girly, and near the end of practice, they all circled around Kim and she came up with a Magic Bracelet game they all enjoyed. Every single girl loved it, no matter what their age - they each chose a special bead to put on the bracelet, and when it was done, we each tried it on, and it magically made every single one of us smile! Magical, I tell you, magical... It it always magical to watch Kim with kids, because she has such a way with them and they love her so much. Special times! Every day holds something new, that's for sure, and even though I feel like I'm behind, I'm going to work harder at playing. Because let's face it - I'm never going to be caught up! 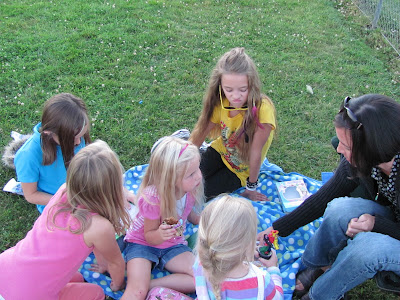