Last Friday, our beloved principal, Mr. Cuadros, planned a special day for all the students at Buena Vista - they got to go to Splash!, which is a super fun aquatic center, featuring a huge slide and a wave pool. The Buena Vista students had the whole place to themselves! I was a bit apprehensive about my little B's being there without me to keep my eagle eye on them, but I needn't have worried. There were less kids in the water on this day than any other time we have been there. And there were plenty of other parents just like me to keep watchful eyes on all the little swimmers - between the teachers, parents and life guards, the place was well-covered. They got to spend a full two hours int he water, and let me tell you, my kids are still tired! When they went to bed Friday night, they both kept saying, "I still feel like I'm in the waves!" 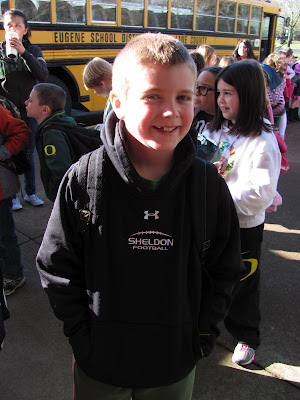 Here is Britt, fresh off the bus. I was just getting ready to cross the street when his bus pulled up, and he saw me standing there and waved to me. So I blew him a kiss, which he caught! My sweet Mama's Boy... 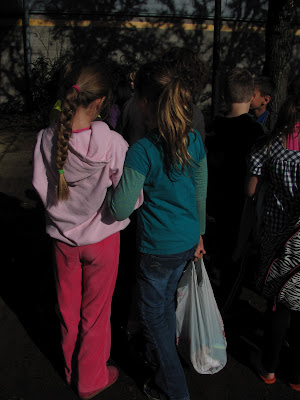 And here I caught Brailey and her best friend, Carrie, as they came off the bus. I thought it was so tender how Carrie kept a hand on Brailey while they were in line. These two really love each other and are very much alike in their kindness. See how Carrie was lightly holding onto Brailey's pony tail? I wish I would have had a friend like that when I was Brailey's age... What a blessing they are to each other! 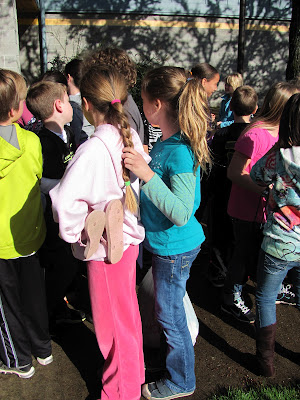 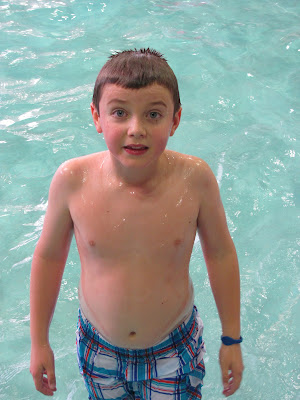 Brittster Man, our superstar swimmer. He lost a bit of his swimming from the summer, but he was still fabulous. 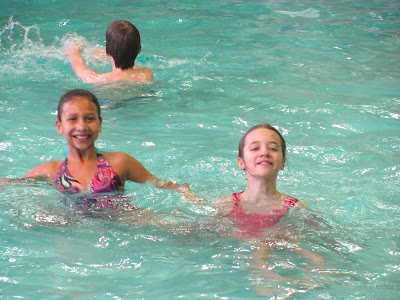 Brailey and her besties, Carrie and Camille. They had a so much fun! 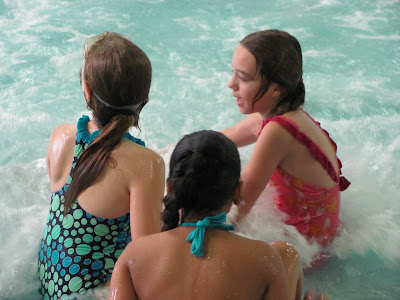 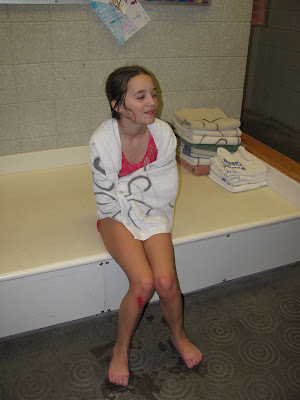 But of course, my Hard Luck Angel had a little mishap when a boy accidentally jumped on her and cut her knee. I not sure how it happened, but the fine folks at Splash! cleaned it right up, and she was back in the pool in no time at all. And I was super glad I was there! 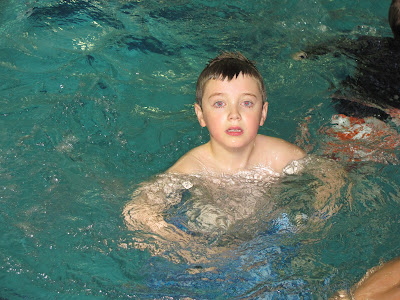 Sadly, Britt didn't have quite as much fun as Brailey, because none of his friends from his class participated in the swim. He had two friends absent and one in the game room. So he had to kind of entertain himself. Of course he found his sister several times and played with some girls from his class for a while, but his heart was a little sad, which made his mother's heart ache. Still, he had a fabulous time - it just would have been "even better" if his besties were there, too. Overall, though? It was a fantastic field trip, and one they will both remember forever and ever. Amen!
at March 19, 2012