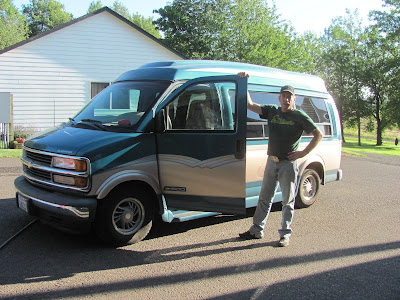 No, it isn't our kids or a horse... It's his new hot rod, "The Van!" Brady is head over heels in love with this rig, and Britt is right behind him. In fact, Britt wants this to be "his car" when he gets old enough to drive. I can just imagine the look on his Prom Date's Parents' faces when he pulls up in this... Brailey loves it too, although she and I are more reserved in our affection for it. All kidding aside, this van has been the source of a lot of joy for us. I haven't seen Brady this excited over a vehicle ever!

It all started back in April when my niece came to run the Eugene Half-Marathon. We were down by the University searching for Lanie at a checkpoint and then making a mad dash to find her at the finish. Brady spied this van on a side street, and unbelievably, it was for sale! He had been looking for vans for quite some time, and we'd looked at some real doozies. So the kids and I were following Lanie's friend, Anna, who was on a mission to get to the finish and not waiting for anything, and Brady was left without a cell phone, since he had given his to Britt. He didn't even have a scrap of paper or anything to write with. As luck would have it, though, he spied an old broken CD on the ground, and he used his pocketknife to scratch the number listed on the for sale sign into the CD.

Brady is truly obsessed with the thing, though, and shows it to everyone we see. "Have you seen my new van?" In fact, he talked about it the entire drive in to mass for Britt's First Communion to my dad, who had the honor of sitting next to Brady in the front seat - this was about a twenty minute ride. My mom and I sat in the back and giggled about my dad's responses. My dad is less impressed with the van than Brady would like, but he did his best to appear interested. As we pulled into the church parking lot, Brady said, "I like to park the van right up front at church." You should have seen my dad's head whip around! Brady was only kidding, of course, but it was hysterical for my mom and I to see.

I can't tell you how many people Brady has shown his van to. We affectionately refer to it as "The Hulkster," since it is big and green. Sometimes we call it "The Honey Comb." Britt thinks it is funny to call it "The Honey Bucket," but that doesn't set well with Brady.

Brady isn't the only one who is impressed with it. We made a quick trip to Taco Bell late one evening last week after a long day full of activity, and as we pulled up to the window in the drive-up, the guy working behind the counter said, "Wow, that's a nice big van you've got there - that's really nice!" I couldn't believe it - even the Taco Bell worker is impressed. So that is the story of Brady's latest pride and joy. If you know him at all or have seen him recently, then you've likely already heard everything there is to know about it. But the very best thing of all? It's paid for! 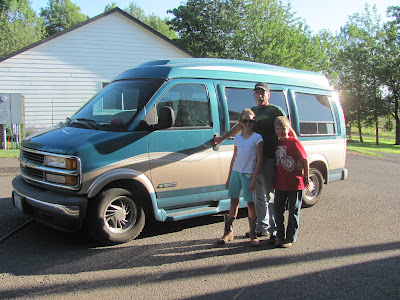