Anyone who knows me well knows the 4th of July is my favorite holiday, and this year was the best celebration I can remember. It was aweseome! We found ourselves in Pendleton for their first 4th of July PBR event this year, and it was not only amazing, it was A-M-A-Z-I-N-G! There were two nights of bull riding, and Brady got to work with his favorite judge, Clint Corey. We called the trip our Mini Family Vacation, and enjoyed every second of it. 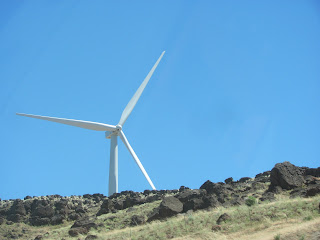 We love looking at all the big windmills along the gorge. I snapped this picture as were driving along I-84. The B's read for most of the trip, but near the end, I let them play on Brailey's new iPod Touch. Thank you Uncle Brian and Jaden for helping Brailey get some "apps" on there before our trip! 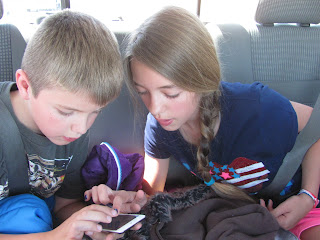 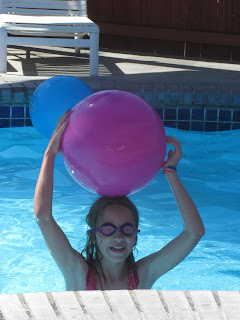 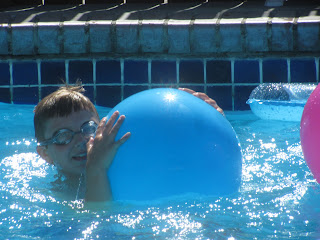 We stayed at a hotel that had the most adorable pool, and it was heated! We went swimming seconds after we arrived. Although we actually drove through rain on our way to Pendleton, the weather turned nice when we arrived, and with the warm water in the pool, it was perfect! 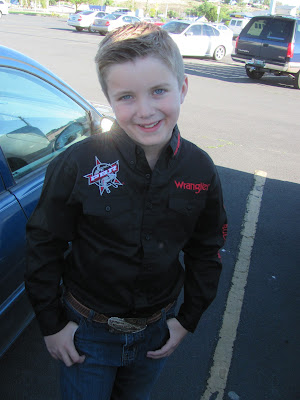 My handsome son and beautiful daughter and their handsome dad the first night of PBR action. It was held at Happy Canyon, which is famous for the Happy Canyon Pageant held during Roundup Week. It was super windy to start with, but thankfully the wind died down near the end. 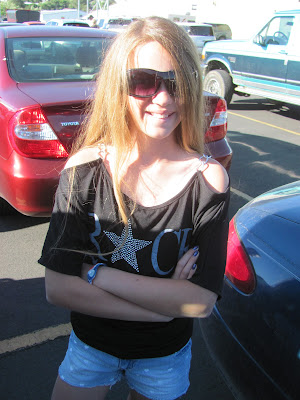 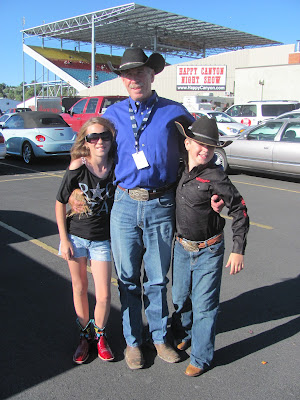 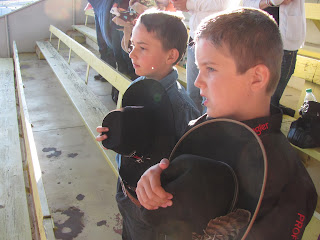 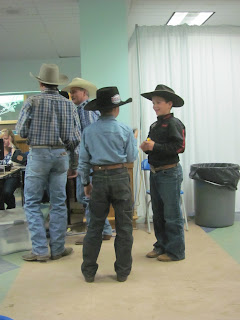 Britt and his new friend, Zane Corey (Clint Corey's youngest), showing respect during the National Anthem. They were so cute, chatting it up about everything under the sun... 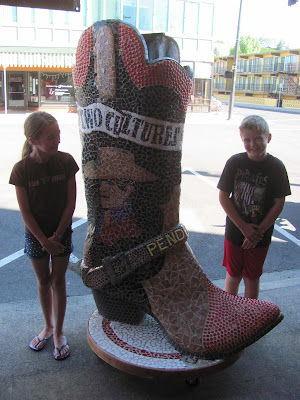 The next day, we had a great time hanging out downtown and watching the parade. This super cool boot sits outside the World Famous Hamley's western store. Later, this nice couple let us sit in their pickup to watch the parade. The weather was gorgeous! 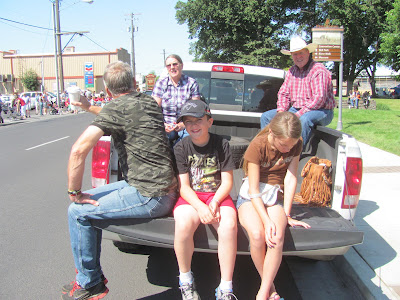 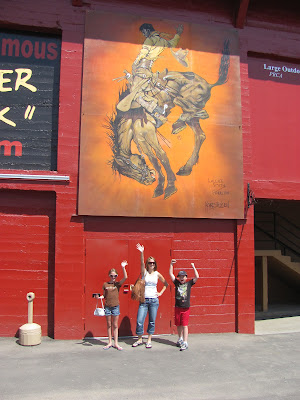 There was a barrel race inside the Roundup Arena, and we saw ran into several friends while we checked out the action. They built a brand new section of bleachers this past year, and they are gorgeous. We stood under the renowned "Let 'Er Buck" painting and posed for a picture. 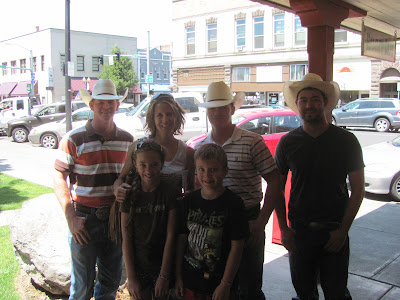 After a quick dip in the pool, we headed back downtown for lunch and ran into these cowboys, who were kind enough to let us get a picture with them. The one behind Britt is Travis Briscoe, and it was fun to meet him after seeing him on TV so many times. He was, of course, a great gentleman! We found another cool boot at a different store - are they fun or what?! 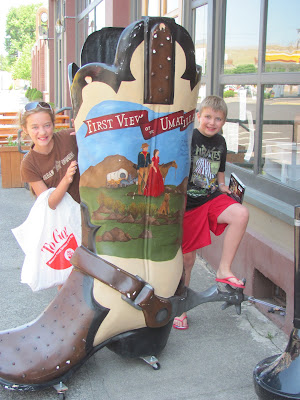 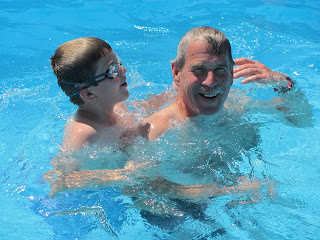 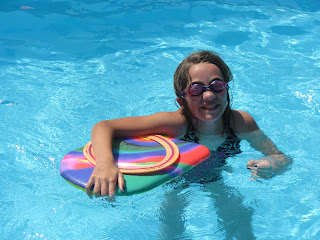 And after lunch, more swimming! The kids got a ton of swimming in. We had the pool to ourselves the entire time we we were in it, which was great! 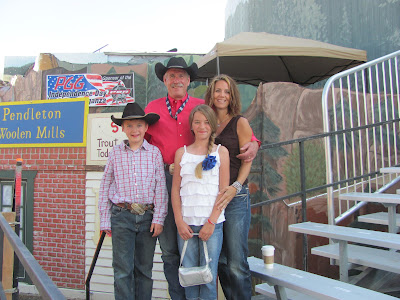 The second night of action, The 4th of JUUU-ly! The bull Brady and Britt are scratching was so nice - I want him! He came up to the fence while we were walking by, and Brady bravely reached out to scratch him, which the bull loved! So then Britt did some petting/scratching. Brailey even "touched" him for a brief second. After we left, city slickers who saw Brady and Britt came up and did their own scratching. Brady started a great trend! He was such a nice bull - I would love to own him. What a rare treat! 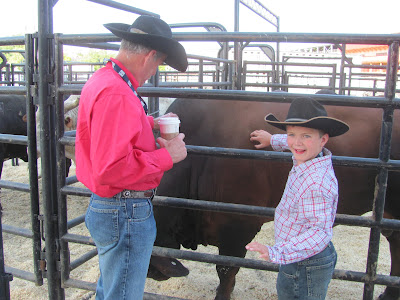 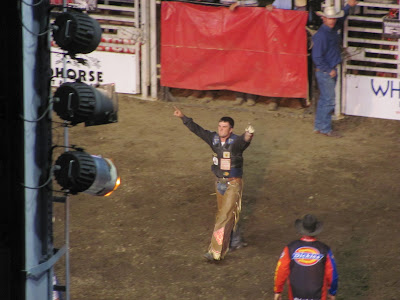 Our Cody Ford rode both of his bulls the second night. He scared the H-E-DOUBLE HOCKEY STICKS out of me on the first one (I though he got stepped on), but he was fine. The crowd went wild when he rode his second one - he's from Hermiston, so he was like their hometown boy! It was awesome, and I'm so happy he did so well. 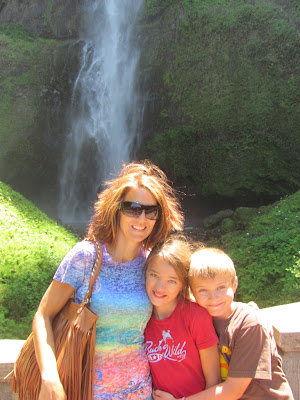 On our way home, we did something we've always wanted to do - we stopped by Multnomah Falls. It was great! We didn't realized there was a big hike up behind it you can take, which everyone wanted to go on. It was a mile long, STRAIGHT UPHILL, and Brailey and I had our flip flops on, so it was a bit hard on our feet. Truly, it is a gruelling hike, but fun. The head of the falls was closed due to a rock slide, but at least there was a nice area to play in once we made it to the top. NEXT TIME I will be wearing my Under Armors! 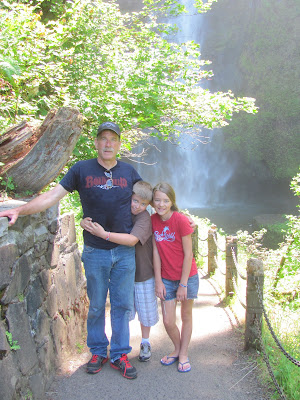 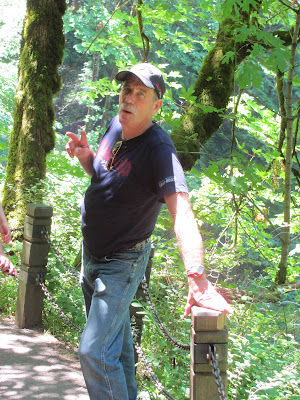 Brady was a little tired, here... It is almost as tough to come down as it is to go up! But we MADE IT, and we are so glad we did. The B's enjoyed a nice, delicious snow cone afterwards. It is a Mini Fourth of July Vacay we will always remember. Happy Birthday, America! 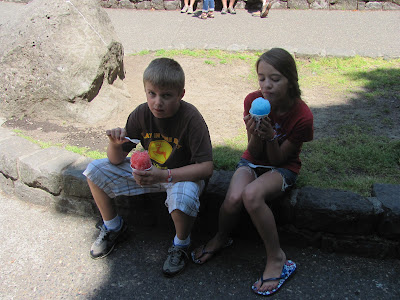