Look who we ran into down by Hayward Field last Sunday while we were checking out the Olympic Trials action...! The guy in the shorts is Angelo Taylor's brother and coach! I recognized him (from tv) and asked him if he was the hurdle jumper, and he said, "No, that's my brother." And the other guy is their cousin. So cool! We visited with them for a bit and snapped a couple of quick pictures. They were extremely nice, and it made our day! We took the kids down to see the excitement of the Trials. We didn't feel like standing in line for a super long time, though, so we chose not to partake in the free festivities. It was still fun to walk around and feel the excitement in the air. And speaking of air, I took a picture of the cool banner flying overhead. And Angelo Taylor, a former gold medal 400m hurdle winner for the past two Olympics, is going to London! He barely made it, after he hit a hurdle and nearly went down and got "off" on his steps. But he pulled through and has another chance to win a third gold in his event. You can bet The 4 B's are pulling for him! Go USA! 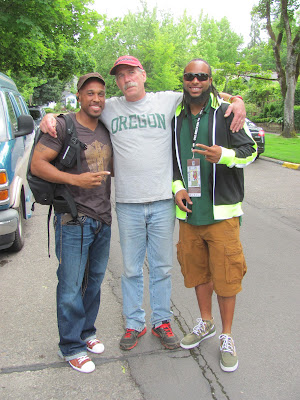 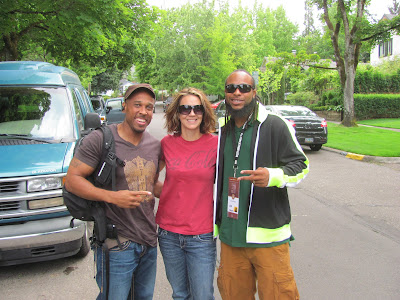 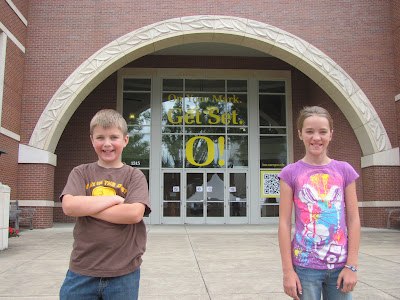 In front of the Law School, which is directly across from Hayward Field and near and dear to my heart, since I used to work there. 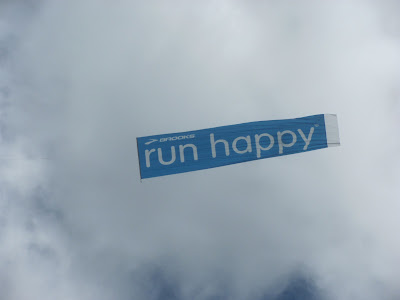