Believe it or not, here we are sitting in the Catholic Church in Molalla, St. James. While we were out "garage saling" the day before, we came across the church, which is just down from the the Molalla Rodeo Grounds, and we saw that Mass was at 5:30 on Saturdays. Perfect for us to be able to attend! However, once we arrived, we discovered it was going to be a mass in Spanish. Since both kiddos speak Spanish, we figured we may as well stay. Except we were the ONLY ones who came - us and one other Hispanic man. So the priest, Father Ted, explained to us that he had just made the schedule change, and not many people knew about it yet, and so he did a Communion Ceremony for us, in English, which was super special and made us all feel grateful and blessed. Father Ted was so kind and good to us, we hope to be able to attend his mass the next time we are in the area. 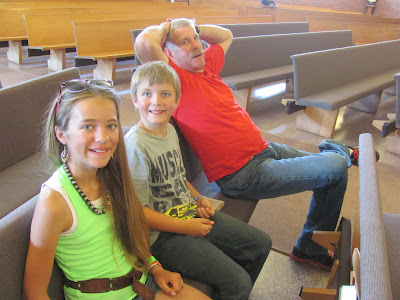 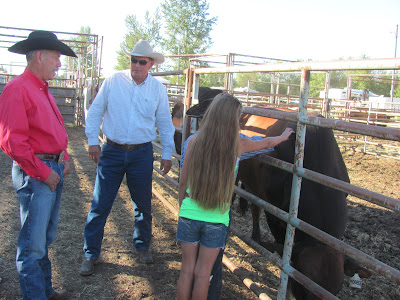 Now this is exciting! This has now become, "MY BULL!" Not really, but everyone is calling him that. This is the same bull Brady started scratching at the PBR in Pendleton back in July (click here to see the post). Brady grabbed the man who takes care of him, Dennis, and he was kind enough to take us over to see him. Protege, is his name, and he is actually a clone by Dr. Proctor. And he loves attention! Dennis was trying to scratch the other clone in his pen, who didn't like it one bit, and Protege came over and pushed him out of the way so Dennis could continue to scratch/pet him. He's so pretty! I told Brady I want him for Christmas. Of course I am only joking, but I would truly love to own this bull. He does his job splendidly, and then goes nicely to the out gate. I LOVE THIS BULL! Isn't he gorgeous? I have a video I will upload and post tomorrow or the next day of him bucking. 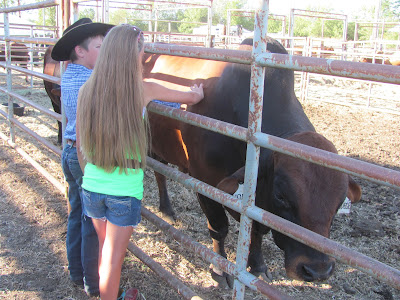 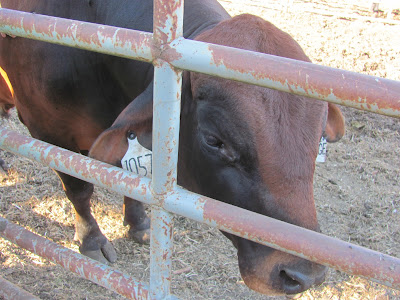 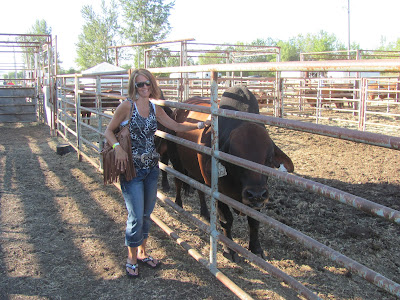 See? He loves me! He wants to be MINE, because he knows how much I adore him. OH yah! 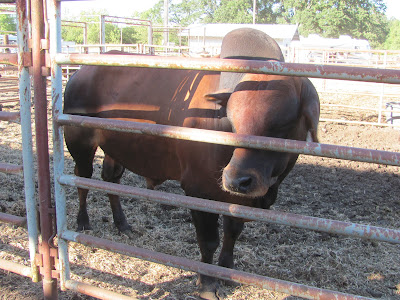 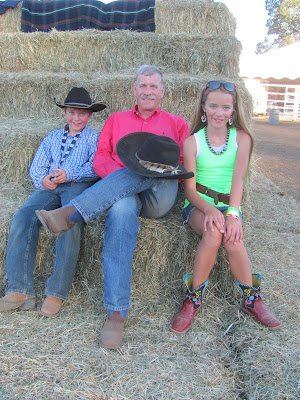 My gorgeous B's, ready for the night's entertainment to begin. 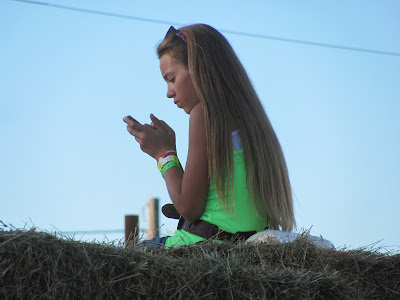 Brailey, playing with her iPod Touch. She is so beautiful she takes my breath away, sometimes. And apparently she takes other people's breath away, too... More on that in a second. 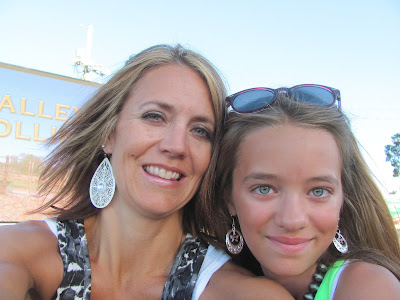 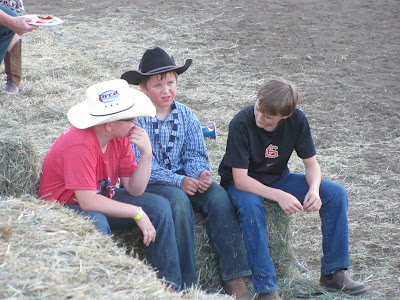 Britt made friends with these two characters, and they hung out together all night long. Near the end, however, they had him coming up to Brailey to try to bring her down so they could meet her. One is 13 and one is 11. Apparently, they wanted to meet her because she is so "hot." NOT what I wanted to hear about my 10 year old daughter. They were relentless, and had Britt begging her to come down and meet them behind the scoreboard. After a bit, I said, "Tell them her mother said NO." Still, they sent Britt over, so I said to him, "Tell them if they want to meet her, they can come up here." Then, after the bull riding was over, I took her down to them, and embarrassed the hell out of them. I said, "So you would like to meet my daughter?" They both denied it, and so I asked Britt, "Didn't they tell you they wanted to meet her?" And he said yes, so then they admitted that they did indeed want to meet her. So I introduced her, and we went on our merry way. I am absolutely NOT READY for Brailey to be called "hot" or for goofy boys to be chasing her. Scary times lay ahead... 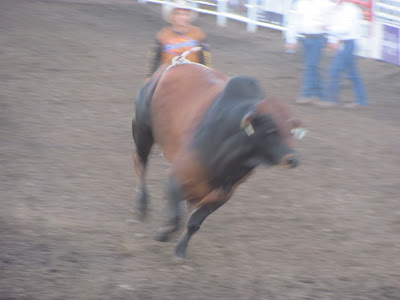 My sweet bull, running to the out gate. Isn't he a beauty!? 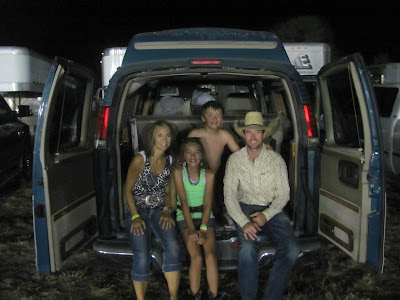 Here were are with Sean Willingham, an extremely nice cowboy from Georgia who has become a super star on the PBR Tour. We had a great time visiting with him! And that concludes our fun at the Ross Coleman Invitational 2012. We are already looking forward to next year!
at August 07, 2012