Funny Pages by The Little B's

The humor of my B's:

This summer, I tried to explain to Britt about having "try." I wanted him to understand about having heart and trying his best and if I recall, it had something to do with the Olympics and how those athletes work so hard and never give up and did Britt know he could be anything he wants to be, as long as he has some try and never gives up. I think he got it. This is what I heard one day when he and Brailey were playing with Legos in his room:

Britt: "See, I had some try and I found it." (Telling Brailey how he found a certain Lego.) Later on, after she asked if he knew where one of the Legos she needed was, he told her "You're going to have to have some try. And then you'll find it."

A month or so later, after Brailey had won an award at the school assembly and the teacher said it was for "always trying her best," Britt said to me, "When I heard the teacher say that, I was so proud, because I thought to myself, 'I taught her that!'" Apparently, he thinks he taught her how to "try" from their Lego conversation.

While Brady was back in the Nebraska a couple of weeks ago, the little B's went up and gathered a bunch of nuts under our "Wilbert" Tree. And they then put the "wilberts" in a pretty jar for Brady as a surprise for when he got home. Filbert, Wilbert - it's all the same, right? It makes me smile every time I hear them talk about our Wilbert Tree. The picture below is what they set on the counter for him (the "wilberts" are in the jar under the "DAD" napkin, tied with a pretty red piece of yarn). Pretty sweet kiddos, huh? They did this all on their own. 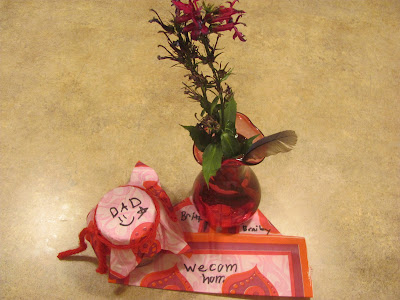 My little B's are so funny and sweet! They're funny and they don't even know it, much like every other kid in the world. But of course, to me, my B's are the funniest!
at October 04, 2012