How the Witch Robbed the Bank by Guest Blogger Britt Murray

Britt woke up Monday morning with a terrible, terrible case of Poison Oak. It was bound to happen, and so of course it did, but it is still a miserable experience. Every morning he has woken up with even MORE. We tried sending him to school on Monday (Brady said YES, I said NO), but they sent him home. I called the doctor to get a prescription for him to have some immediate relief, and wouldn't you know they, and several surrounding pharmacies, were out of that particular medicine. Finally, we got the medicine yesterday, and he has taken two doses. However, we still haven't seen much relief from itching an spreading. Send a prayer our way for it to go away soon!

There is a tiny sliver of silver lining, though, because Britt wrote an amazing story yesterday morning, while he sat in the pickup, running errands with Brady. So read on to see his creativity - I know you will enjoy it! (I did change the spelling from what he had, but the words are all his!) 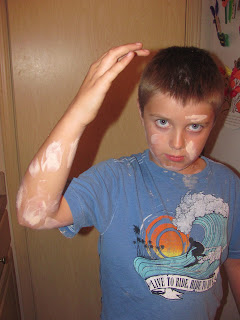 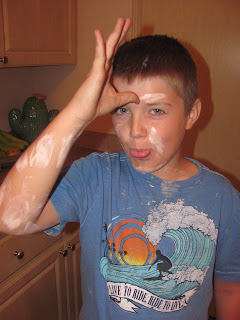 Once upon a crime there was a witch that hated children. She hated children so bad that she took the risk of going in their house to do something to them. She had every potion imaginable and wore an Abraham Lincoln hat. She had a scary nose and she was really hubba-hubba.

Once day she decided to make a potion that would make her skinny. And if she got tired of being skinny, she made a potion to you-know-what.

So she rode her broom to the bank and loaded her pistol and broke in the bank. But little did she know about cops. When the cops surrounded her she didn't know what to do, so she shot her grafeling hook to escape. But the cops started shooting tranquilizer needles at her so she threw an explosive at the cops and robbed the bank. But she couldn't get out, so she just blew up the bank and lived happily ever after. The End!
at October 10, 2012