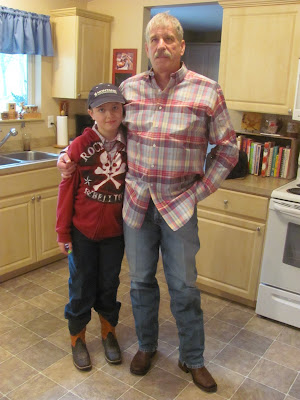 Here he is, still as an eight-year-old, going off on his first traveling adventure with his dad, all by himself! What was supposed to be a fun pre-birthday weekend full of swimming and fun in Yakima WA (for the PBR) with all 4 B's ended up being just the two of them, due to Brailey being super sick. So there was some sadness, for all of us. Brailey because she was so sick and couldn't go swimming, Britt because he really wanted to go swimming with his best friend, Brailey, and he is a Mama's Boy, me because Britt has never been on a trip like this without me to take care of him (clothes, Bluey, teeth, sleep), and Brady because he is like me, and likes it when we are all together. And although I think we all felt like crying (well, maybe not Brady) when they left, it was time for Britt to go in this new direction and he is so lucky he was able to go with Brady on a "manly" journey. Lord knows he spends enough time with girls - he's got the sensitive down, now for the "tough" of being a man, right? A new stage for him. And even though it was hard for me to let my baby boy go, I knew it would be good for the two of them, and it was. They had a blast together! The pool was the warmest pool they've ever been in, they said, and they even managed to score a brand new Nerf gun along their way at a yard sale. And Britt was so happy to see us when he got home! It warmed my heart to watch him as he tore through his bag, clothes flying in every direction, to show Brailey his new toy. The two of them talked and talked and talked all afternoon long. By evening, he was back in his spot by my side, snuggling as we watched Ax Men on TV. 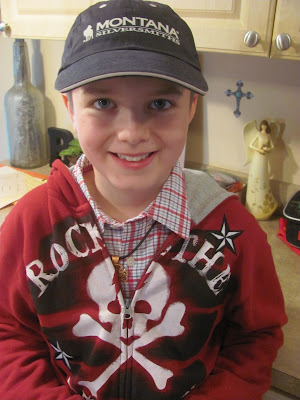 And then he woke up as a nine-year-old! 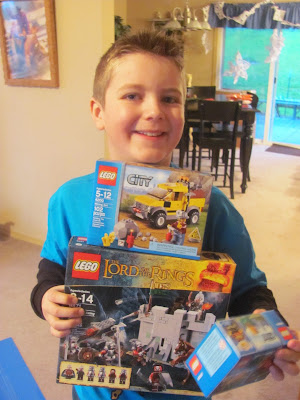 He opened his gifts from Grandma and Papa first thing, so he would know what to pick out when he went shopping after school. That is one of our traditions - we don't buy birthday presents beforehand. We give a certain amount of money and let them shop, which they love and look forward to. We do this instead of parties - we learned it from our beloved Lambert family, and it is a wonderful tradition, if you are looking for one. Instead of spending money on a party, which can get quite expensive, we put that money towards a shopping spree. So it was nice for him to have some presents to open, too, from Grandma and Papa, and a great way to start the day. They spoiled him, big time! 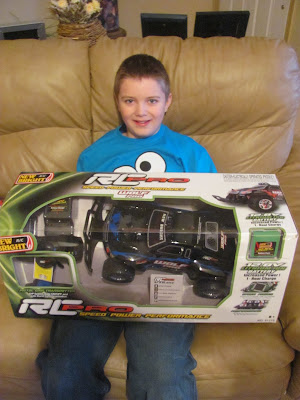 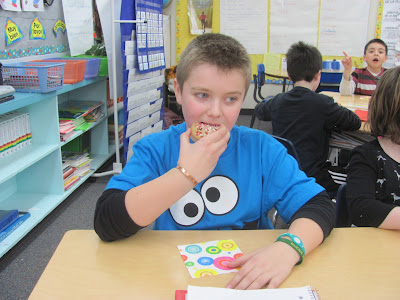 I brought treats to his classroom, and he was so happy to hand them out, along with a cool pencil and monkey eraser, which was a big hit with all his classmates. His teacher remarked how kind it was of him to give them presents on his birthday. The class sang Happy Birthday to him in Spanish, of course, and I learned later that the entire lunch room also sang to him, because his big sister let the cafeteria know it was his special day. He said he had butterflies in his stomach as he had to walk up in front of everyone, but he loved every second of it. 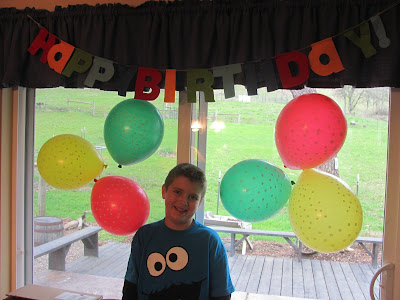 And here he is, finally back at home after running to three different stores and Dairy Queen to pick up the cake. Another tradition of ours is to go out for a Birthday Dinner, but Britt decided he wanted Little Ceasar's pizza at home, because he would have more time to play with his new toys. Smart boy! So Brady grabbed the pizzas on his way home, and we feasted on pizza and A&W root beer and later on, ice cream cake! 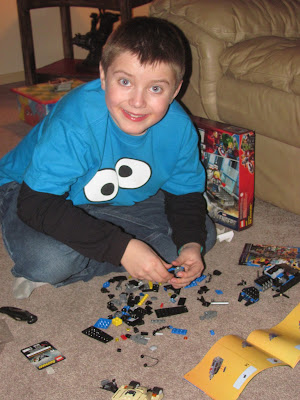 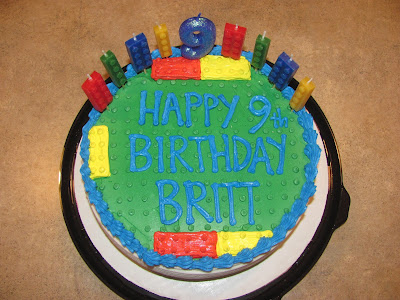 I think this is the cutest cake he's ever had! I love this...! Perfect for our Lego theme. And of course you can't go wrong with an ice cream cake from Dairy Queen. It was delicious! 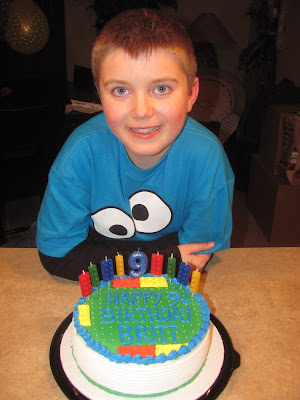 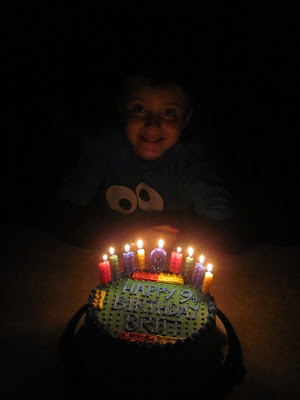 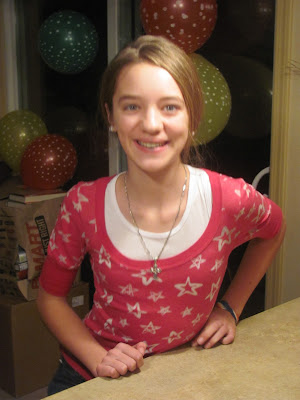 And here is the big sister, finally getting back to good health. She was down for 7 days with the flu - it is the sickest she has ever been, but she's a tough little cowgirl, and she is bouncing back from it all. She and Britt had to battle it out in OBOB on his birthday, which I will write more about later, and her team is in the final battle next week! We are so proud of her team and Britt's as well.

The only fly in the ointment on Britt's birthday was the end, which he had a hard time coping with. He didn't want to stop building with this new Legos, and he didn't want the day to end. We talked about how hard it is to feel this way, and how it is normal. Birthdays are a big deal in this family, and we celebrate them as big as we can, but it is always sad when they are over. The letdown is tough. Fortunately, Valentine's Day is around the corner!
at February 12, 2013