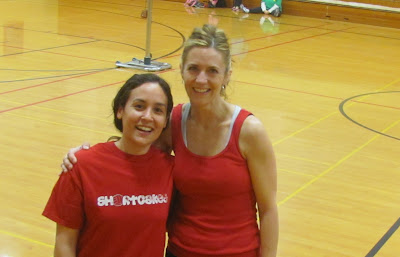 Meet my beautiful friend, Bethani! (We are sweaty and worn out in this picture.) Brailey and I met Bethani and her daughter, Isa, during volleyball season this past fall. I knew Bethani was special the moment I met her - she is kind and cool and a star athlete! Brailey and I have loved spending time over the past few weeks playing more volleyball with Bethani and Isa. It's an interesting story, really...

You see, I had no idea how much I love volleyball. If I could go back in time and redo a part of my life, I would foster my love of the sport and be the greatest volleyball player to ever live (in my dreams, that is - you can think big things like that in your dreams!). Anyway, long-story-short, back in December, Bethani invited me to be a part of her city league team, The Shortcakes! I was so thrilled and honored that she asked me and excited and NERVOUS to play! I've never really PLAYED volleyball, just coached it a little.

I first learned a little about the game and some basic fundamentals from our friend Clay Howard, who was a professional beach volleyball player back in the day (so was his wife, Lynn - they met on the beach!), when he started helping Brailey during her first year of volleyball as a third grader. He would show Brailey a skill by having me do it, and I discovered I loved it! I was still terrified of bumping the ball, though - afraid of looking like a fool or failing (you know my motto, "looks are everything!"). And then, Brailey's coach had the team play the parents a couple of times, which was really scary for me and completely out of my comfort zone, but I did it for Brailey and had a great time! So over the past few years, I've been bumping/setting the ball with Brailey and Britt every now and then, and becoming more confident. Fast forward to this year, when I helped coach Brailey's team, and I had the volleyball bug big time.

I have always loved the game. It is one of my favorite things to watch during the Olympics, and I've long been a fan of beach volleyball. It is so fun to watch! I remember seeing my friends play in high school and being in awe of how good they were. Like I said, I wish I could go back in time and have a good coach who really tried to help me learn the basics - fundamentals, baby. Obviously, I wasn't "a natural." Just learning the proper way to bump and set the ball would have been helpful to me, though. The only thing I can remember about my experience is how terrified I was of serving the ball and of looking like a fool. What can we say? I'm a late bloomer.

So when Bethani asked me if I wanted to join her team, I was actually scared. I don't have that kind of confidence, you know? I've never really PLAYED-played volleyball. However, I wanted to do it, and Brady was supportive, because he knows how much I love the game. It was a big decision for me. Now, the joke around our house is that I'm trying out for the "Senior Olympics."

I was so nervous the first game, my legs shook the entire time and I was scared to death I wasn't going to be able to return a serve. And I tweaked my neck the first game getting a dig, tweaked my back the next game - all from being tense with nerves, I think. But gradually, I became more relaxed, and it started being super fun! I made tons of mistakes, but I learned more than I thought an old gal like me ever could. Last night was our last game for the winter season (spring season is coming!), and I even had a "kill!" Bethani taught me how to spike the ball, and I actually did it in the game, which was so much fun - the highlight of my season, for sure.

The other good thing about the city league is that the girls, Brailey and Isa, got to know each other a little better and they got to practice a bit. They don't go to the same school, but they are the same kind of girls - quiet, shy and sweet! Last night we met early and stayed late, and all of us worked on our skills. Bethani doesn't need to do any work, because she is amazing, but it is so much fun to hang out with her and her girls and we all had a great time. Even her little first grade daughter, Soni, was able to do some bumping (she's a natural!), and that is what I love so much about the game. It is fun for anyone to play, at any level or age. I'm going to have Britt play next year, and I think he will love it (we just have to talk his friend Daniel into playing it with him!).

Now we are waiting for the spring season of City League to start, which is a short season of play. It is only once a week, though, and even though our schedule is jam-packed with activities, the amount of fun and enjoyment I get out of playing is worth the extra scramble for time. Like they say, life is short, play hard! And GO SHORTCAKES! I'll try to get a picture of the entire team during the spring season to share with you. Volleyball... It's good for the body and soul!
at March 13, 2013