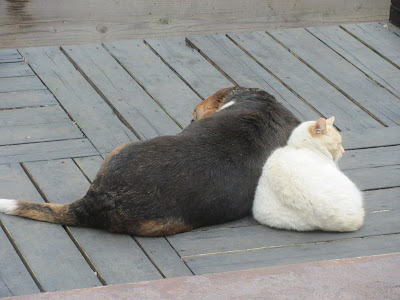 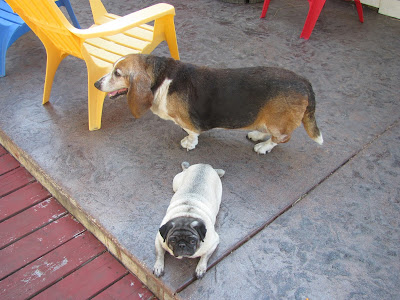 We don't know when her birthday was, only that she was born in the year 2000. Above you see her with her very best friend, Jingles, and below with Rosin, her nemesis more than friend. Sadly, we lost her on the 16th of April this year. It wasn't pretty. The poor old girl could not hear a thing, and my worst nightmare came to life when I accidentally ran over her with Estelle. Brailey and I were headed for volleyball, so she was in the car with me, and Britt was walking to the house and saw the whole thing happen. When I say it was a nightmare, I mean it was a tragic, horrible, gut-wrenching, heartbreaking nightmare. Thank our heavenly father Brady happened to be home that evening. She was old, and it was time for her to go - we knew her time was near. But we certainly didn't want things to end the way they did. And oddly, even though she drove us all crazy, because she really wasn't a great dog, we all miss her.

Cats adored her, and she was a mother figure to several of our cats. No cat loved her more than Jingles, though, and he hasn't been around much since she died. We think he might be out looking for her... He would find her wherever she was and sleep with her. Even Rosin, who was a pest to Daphne and sometimes drove her crazy by nipping her ears, seems to be searching for Daphne. It didn't seem like they were really friends, yet Rosin has been walking around, looking for her.

She was Brailey's first Christmas present when she was six months old. I had a beloved basset hound named Izzy that I left with my parents when I moved from Harney County - she was a country dog and I didn't want to force her into being a town dog. Plus, my parents loved her as much as I did. She was such a good dog! And I had always loved basset hounds because my Aunt Renee and Uncle John had one when I was a kid (Pokey was her name) and I thought she was the best dog I'd ever met! Izzy was a super special girl, too, and so Brady and I decided to get Brailey a companion, and found Daphne through a basset hound rescue agency. She was two years old when we got her.

Sadly, she came with some unpleasant baggage. For one thing, she was terrified to travel. She would shake so violently, we finally decided to stop trying to take her with us. She was much happier at home. The UPS Man told me he always knew when we were home, because that's the only time she barked. If we were gone, she was friendlier than  friendly! Heck of a watch dog, huh?

Even though she wasn't the best dog in the world, we still miss her, and it has been much harder to deal with than I ever imagined it would be. I find myself looking for her every time I go outside, every morning when I wake up, and every time I pull into the driveway. Brady has found himself doing the same thing, and said he misses the old girl, too. It is funny how animals find such a deep place in your heart, even when you don't really love them like you want to.

The silver lining is that we were all able to tell her good bye and that we loved her and we wished her well in heaven. And minutes after she died, we saw a rainbow right over our hill and two doves flying, and we just knew, somehow, that Daphne had found her way to heaven. 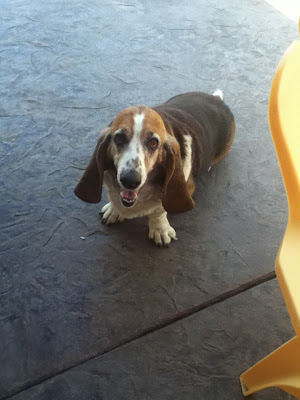