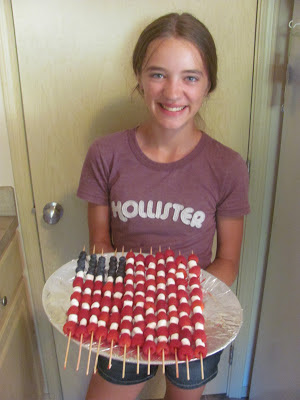 If you know me at all or have followed this blog for a year or two, then you already know the 4th of July is my favorite holiday - I love it! This year we started our celebration a bit early. Brailey made some treats for a visit with our beloved Lamberts in the spirit of patriotism a few days before the 4th. They were harder to make than she thought they would be, but oh-so-delicious! She also made a toffee bar pie with coconut and pecans. She loves to cook, this girl! She added M&M's to the recipe, which gave it a lot of extra flavor. They were yummy! 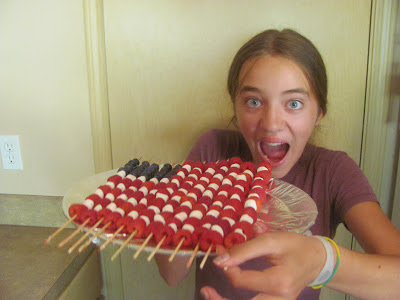 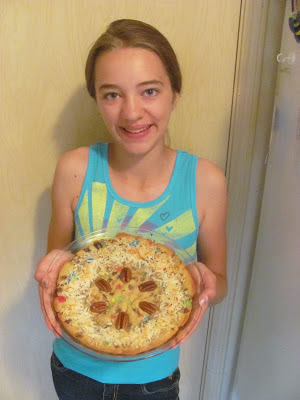 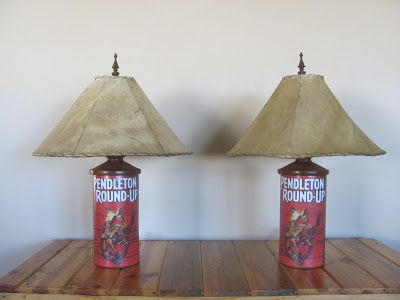 And so in the middle of the week, we made our way to... Can you guess, from the lamps? Yes! Pendleton! Brady judged their PBR for the second year, and we had an even bigger time, this year, because we got to see my niece Lanie, who lives there, and Gramma and Papa came up, as well. It was a family reunion! (The lamps above are now in Hamley's, the world famous western store in Pendleton. I am so thrilled I can hardly stand it! It is a dream-come-true for me to get these into Hamley's.) 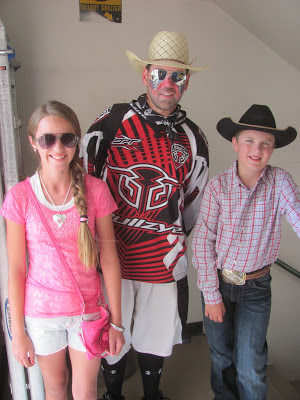 The B's and the PBR clown, Matt Merritt. (Ironic, considering we were just in Merritt, BC a month ago, don't you think?) He did a great job and was super fun to watch. Britt and Brady have seen him several times, now, and according to them, he is funny every time! 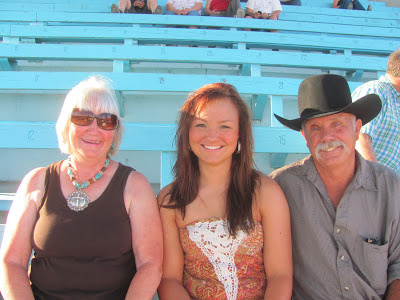 Gramma and Papa, with their first born granddaughter, Lanie. Isn't this a great picture? They were so thrilled to see her and to spend a couple of days with her! Look - Papa is even smiling for the camera! That is a true miracle, folks, it really is. They had a wonderful time hanging out with Lanie. She is doing GREAT! She looks more beautiful than ever, and is doing really well, all on her own out in the real world. Below you see her with her friend, Alex. 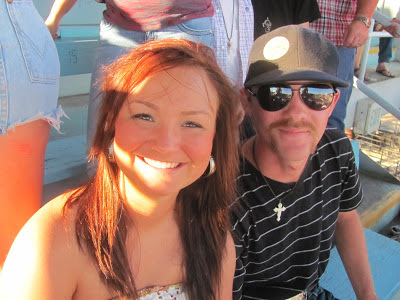 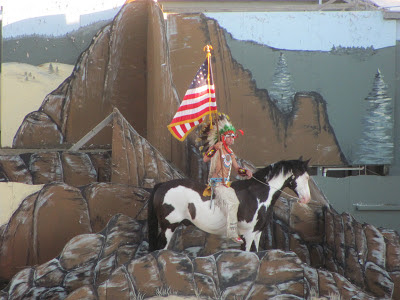 The National Anthem is so cool at Happy Canyon - impressive! 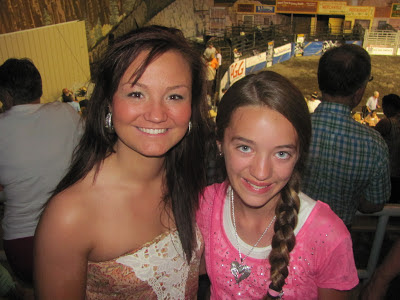 The two cousins... Oldest and youngest girls in the family. We had all hoped the middle girl in the family, Lexi, would be able to come with Gramma and Papa and hang out with us, too, but she had a basketball tournament in Spokane. We were all bummed she couldn't be there! Still, we had a great time, even though we really did miss Lexi and wished she was there. 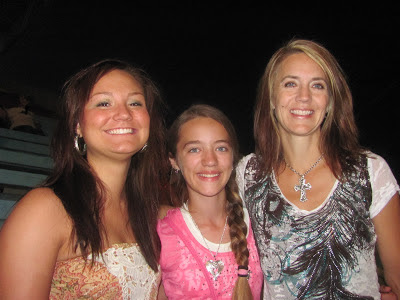 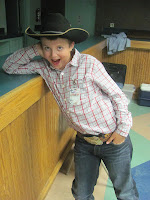 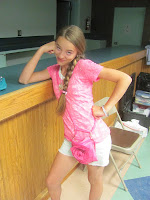 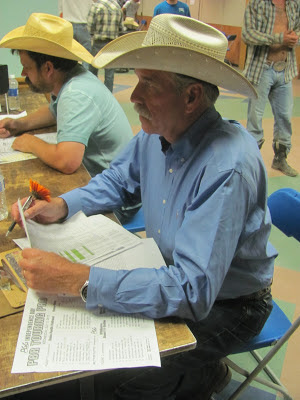 Backstage at the PBR the first night. It was a two night show, so we got to spend a couple of days in Pendleton. Above, you see the two "posers," and then Brady doing the the draw. 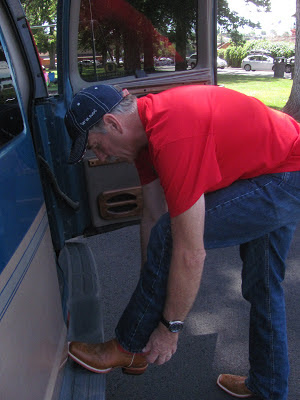 We found an awesome pair of boots for Brady at Hamley's. I thought they were pretty groovy, and they actually fit Brady's feet, which is another miracle, because he has a hard time finding boots that feel comfortable to him. Hey - he has to look good selling that silver! 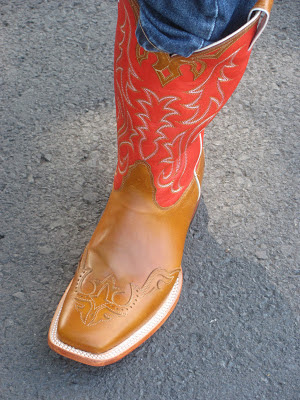 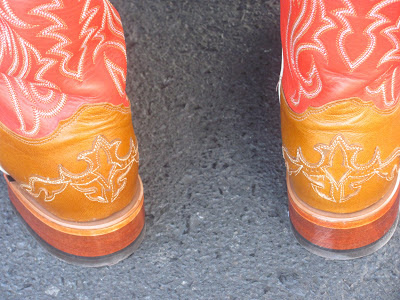 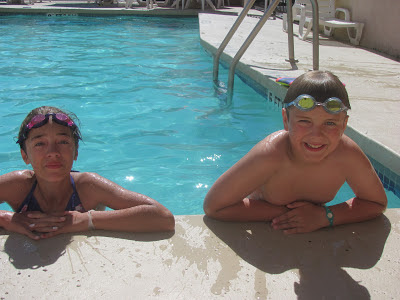 We had two afternoons in the pool. The water was perfect, the weather was perfect... We couldn't have asked for anything better! There were quite a few people playing in the pool nearly all day long on the 4th. Brady said not to worry, he would get them out when we were ready to swim, and sure enough! After a few cannon balls and water guns, we had the pool almost entirely to ourselves! To be fair, the other folks did spend all morning and the early part of the afternoon in it, so it was our turn, right? 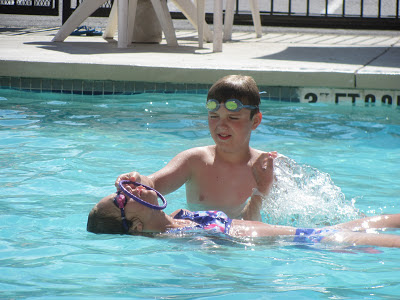 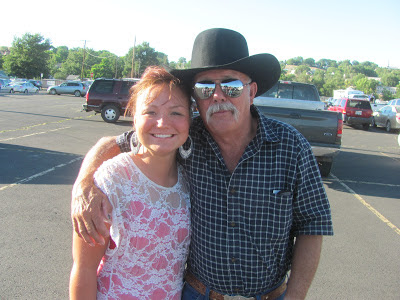 And here we have some candid family pictures from the second performance. Gramma and Papa were more than happy to pose with Lanie. They spent the entire day with her, watching the barrel race, mostly. We met them for a delicious Mexican lunch and later on, talked Gramma in to taking a quick dip in the pool. They love, love, LOVE this girl! We all do - it was a real treat to see her and to spend time together in a relaxed, loving, stress-free and fun atmosphere. 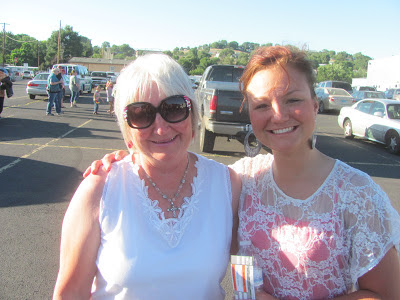 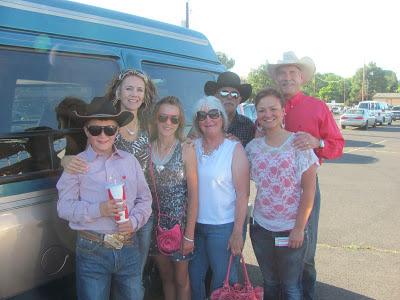 Notice the "Roughie" in the background. We were so happy to introduce it to Lanie, what Papa calls our "Mexican Van." Lanie's friend Alex loves it! So did a kid at the gas station in Arlington on our way home - he offered to buy it right then and there! You can only imagine how happy this made Brady... Over a year later, and he is still bragging on his precious van. Amazing! It was fun to chauffer everyone around in it, though. We have plenty of room! Lanie was impressed with our ceiling lights. Hey - what can we say? Roughie is an impressive van! 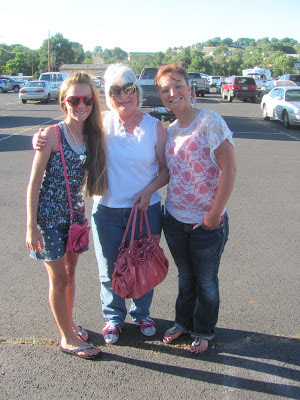 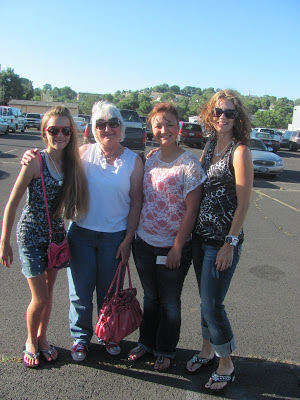 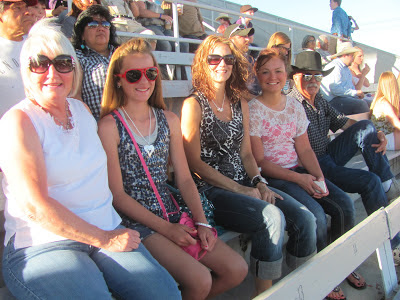 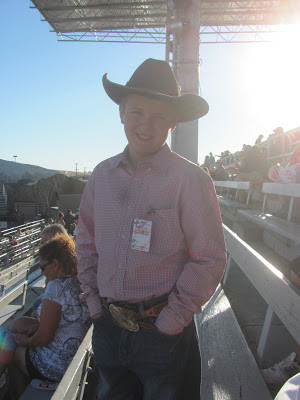 Britt came to say hi - he was Brady's helper during the performances, and ran the judging sheets back and forth. 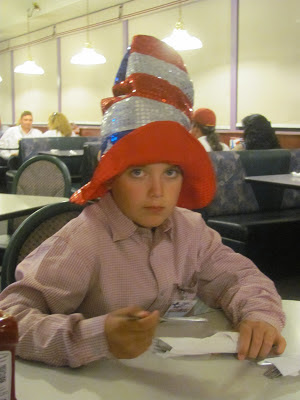 Milkshake time at Denny's! Both nights, after the show, we headed to Denny's for some dessert. Britt got this hat at the parade earlier in the day, and in the spirit of the 4th, wore it into the restaurant. It was a special time spent together - a mini family reunion, for sure!
at July 08, 2013