The Wilsons Come to the Valley 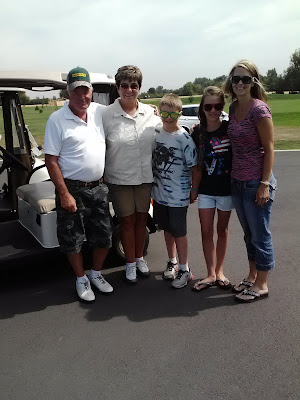 Last week we were able to see my Aunt Sharon and Uncle Jim, and not in Harney County - they came to the valley! We got to see them right before they played a round of golf at the Shadow Hills Golf Club in Junction City. They were in a golf tournament in Salem for the weekend, and stopped in Junction City to play 18 holes before they made their way farther north. So the little B's and I jetted out to see them, and as luck would have it, we caught them just before they started their play. Even though it was a short visit, it was full of love and laughter and lots of hugs - Aunt Sharon gives the best hugs! And Uncle Jim even had his Oregon Ducks hat on, which went perfectly with Britt's Oregon Ducks Shady Peeps. Sometimes it is moments like this that will last a lifetime. If I knew more about golf, we would have gotten there sooner and had more time with them, but I'm still thankful we saw them for the time we did. Next time we plan on going with them to watch them play, and Brailey wants to learn how to drive Aunt Sharon's golf cart. I hope they had a great time in Salem and that they won their tournament. They looked great, and we were thrilled to see them!