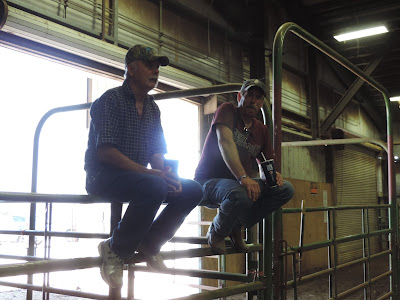 Surprise! Gramma and Papa came over for the weekend to watch the B's in their big show! Papa loves Brailey's horse, Tex, as much as he loves his grandkids, and he was a very proud spectator, to stay the least. Britt was a nervous wreck before he showed. He was in two Pleasure classes, and Brailey was in three. Britt was nervous because a couple of weeks prior to the show, Maggie started bucking. Remember I said we had some anxiety last week getting ready? Well most of it stemmed from this little situation. Long story short, we had to put the puzzle pieces together, and once we did, all was well. But in the meantime, the stress was high. A week or so after Maggie's trailer incident, she did a little kicky/buck thing with Brailey, twice in one week. I thought this was from Brailey getting her with her spur, though, and along we went. Two weeks ago, though, Maggie stopped going over the bridge on the trail course, and would not go through the water box, either. This was extremely odd, because Britt had been taking her over it many times without any trouble at all. A few days later, as I was cleaning her left front foot, she tried to lay down on me - this was very peculiar. She also started bucking with Britt, a little more serious every day. Every time he would ask for a lope, she would give a little half-hearted buck. This was nerve-wracking and strange. One day, she got serious about it and bucked super hard with him more than once, and the last time, he landed on his stomach on the saddle horn. This scared me and made me angry with Maggie. So I got on her in my shorts and tennis shoes, and worked her over good. I tried to make her buck with me, but she wouldn't. However, in the back of my mind, I did notice her switching her tail. So along goes time, and the next day, more of the same. I lost sleep, worrying about why she was doing this all of a sudden. I thought maybe she wasn't a kid's horse, after all. We thought we may have to pull him out of the show. We tried a new horse we have, but she was too green. This was on Tuesday before the show. By Wednesday, I was doing everything different. I rode her first. I lunged her before Britt got on. I had him only trot her, no loping. Finally, all the pieces started falling into place. I realized as I was lunging her to the right she didn't really look right. And she was switching her tail. And then I started thinking about how she had felt a tiny bit off when I rode her that direction. And I remembered her trying to lay down when I cleaned her feet. And her uncharacteristic refusal at the bridge. And suddenly I knew, without a doubt, that she was hurting. So, I found a good horse chiropractor, thanks to Stacy Jo Hartley, and blessing of blessings, he was able to get us in that evening. So up the freeway we zipped to Corvallis, and sure enough, her right whither was "stuck," as Doc Johnson said, and he was able to put it back where it needed to be in order for it to move properly. So all along, the saddle had been hurting her, especially at the lope, which is why she was bucking. Anyway, we were only able to trot her on Thursday on a lead line, and so Britt really didn't get to lope her until Friday and Saturday. And that is why he was nervous. And guess what? So were Brady and I! But she was absolutely fine and back to being the buck-free Maggie we knew. What a relief! But we didn't know until after he showed if she would be "good," or not. Hence, a stressful week! 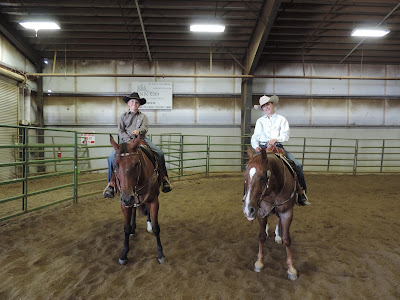 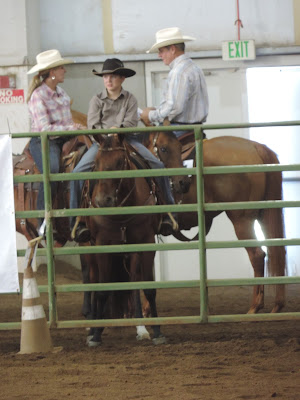 See the nervous face in the middle? But he did great! 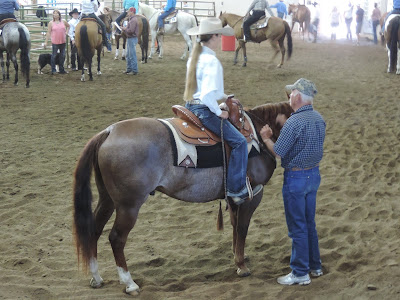 Papa and Brailey Shaye after her first class. She did so good in her first class, and actually got her named called! This was her best class. Ironically, she had trouble in the next two, and the one that she really wanted to win. She is such a good rider, and although we all may be barn blind, out of all the kids and adults there, she was one of the very best riders. However, Tex is not a Pleasure/Reining horse, so he goes a bit faster than is ideal, and Brailey had trouble with her leads. She loves it and works so hard at it! And Britt, who doesn't love it as much, beat her in both classes he was in ! He even won 6th in one of the classes! My mom said this is exactly what happened to me in 4-H - I worked at it and practiced and did my best and was always right where I needed to be, and my brother would be playing cards when it was time for him to perform, someone would have to rush to find him, and he always placed as well as I did. Ironic, isn't it? But today, I can ride circles around him, because I'm the one who loves it, just like Brailey does. It was nice to hear other people remark on what nice horses we have and what good riders our little B's are. 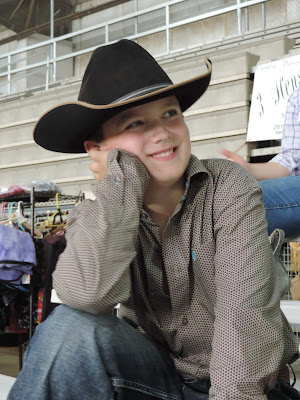 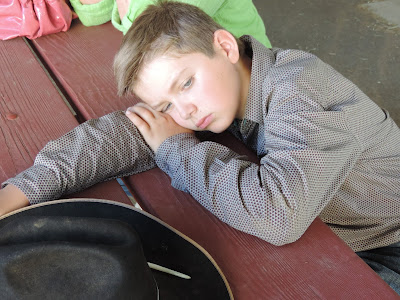 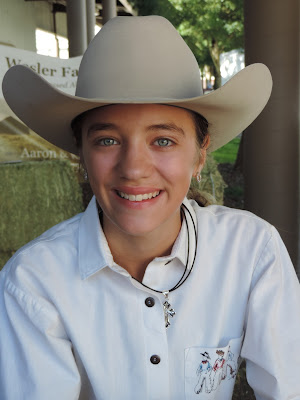 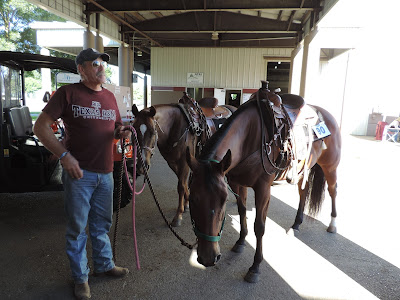 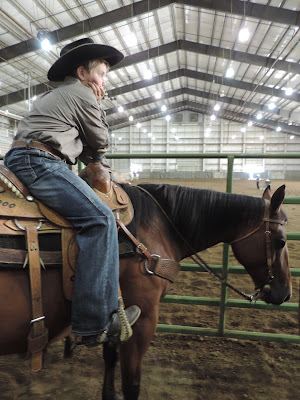 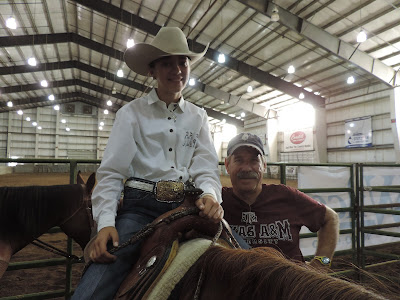 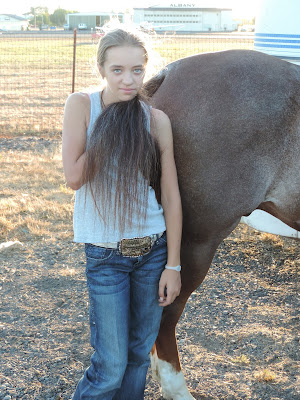 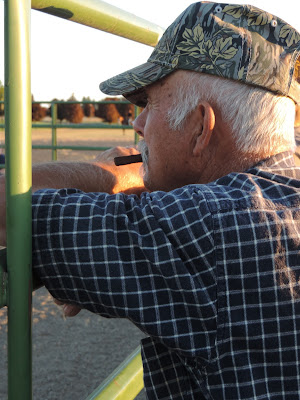 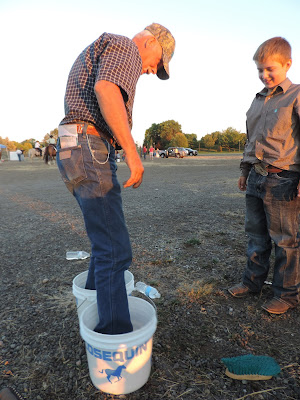 While we were waiting for their Trail Class to start, Britt made up a super fun game for Gramma, Papa and I to play with him. It was Spin-the-Bottle, only with Britt's rules. We each took a turn making up a dare, and whoever the bottle landed on had to either do the dare, or they were out. Some of the dares were kissing Maggie on the cheek, running over to the crowd by the trail and yelling, "I won the lottery!" and above you see Papa having to take two steps in these buckets. Britt also had to kiss Papa on the cheek. This was actually the best part of the day! We had lots of laughing, and it finally cooled off. Brailey and Brady were saddling horses, so they didn't play - just when Brailey decided she wanted to play, it was time to get on her horse. 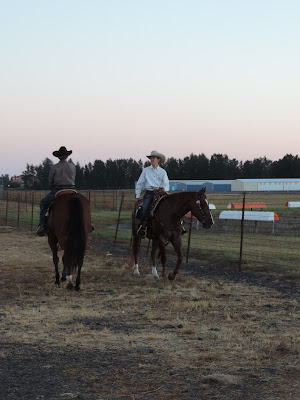 The days are getting shorter and shorter, and it ended up getting dark on the last Trail class, which was the one Brailey and Britt were in. Had it been my horse show, for safety, I would have moved the last two Trail classes to the next morning, but it wasn't my horse show, and the show went on. Tex was fine and has been in similar situations many times. Maggie, however, had never been in condtions like this before, and she got amped up, the white's of her eyes showing. It was nearly impossible to see the course, so we took Britt out of the class. He was nervous about her not doing the bridge, anyway, so it was a good call. The only reason we stayed was because Brailey wanted to do the class - she loves Trail! And by the time she went, it was dark! They shined some headlights on the course, but she was not able to really see anything. But she did amazing! As far as her family is concerned, she was nearly flawless. The judge was an idiot, in our opinion, and gave her no extra points for doing such a good job in the dark. She couldn't even see the pole she was side-passing on! But, that's life - it ain't fair. And she was super proud of herself and she impressed a lot of other people who were watching. She ended up 5th, but should have placed much higher, in our eyes. She was one of the last ones to go, and the last five or so were completely in the dark with headlights making shadows on the ground. Not cool. BUT! Brailey and Tex, as my mom pointed out, were a true team, and it was special. Tex trusted her, and she trusted him, and they completed every obstacle. And that made the longness of the day worth it all!
at September 03, 2013