The Big Visit - Grandma and Papa Come to the Valley 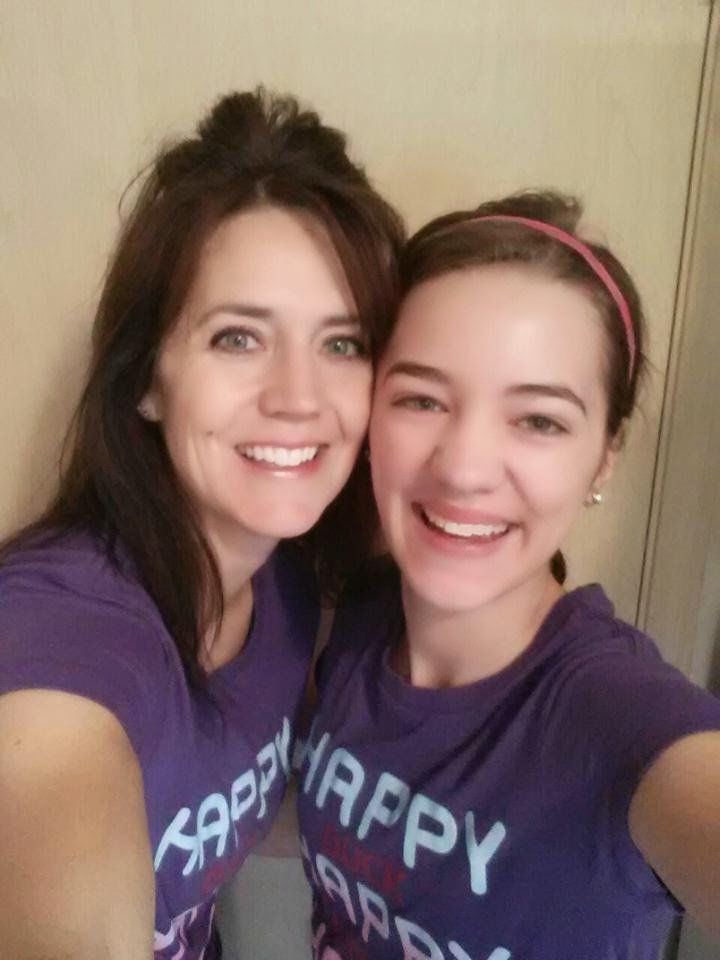 It was a long overdue visit, and we were all HAPPY-HAPPY-HAPPY and super excited to see my parents this past weekend. (I'm so thrilled Brailey wasn't "too cool" to wear our matching shirts on Friday - she's such a fun kid!) We had a packed weekend full of very early mornings, horses and volleyball, and it was a wonderful, special time. We even prolonged the fun and added an extra day onto the weekend - we were so tired, we opted to play hooky on Monday and spent an extra day with them. 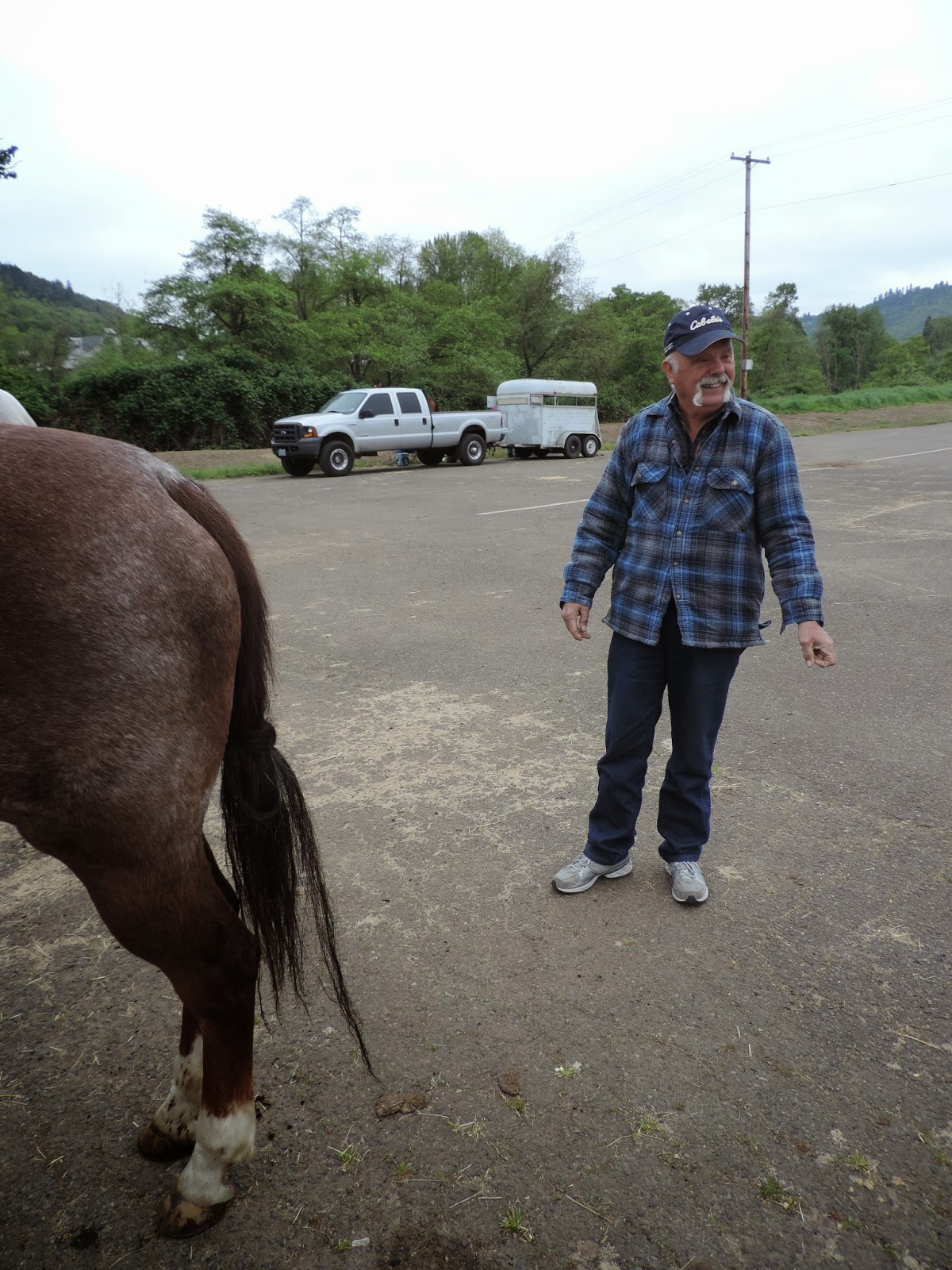 Papa is famous for putting Tex's tail into a "mustache knot." Tex was not impressed. He looked at Papa as if to say, "Really? You're still at it? This is getting really old!" But Papa got a big kick out of it, as you can see by the look on his face in the picture above. 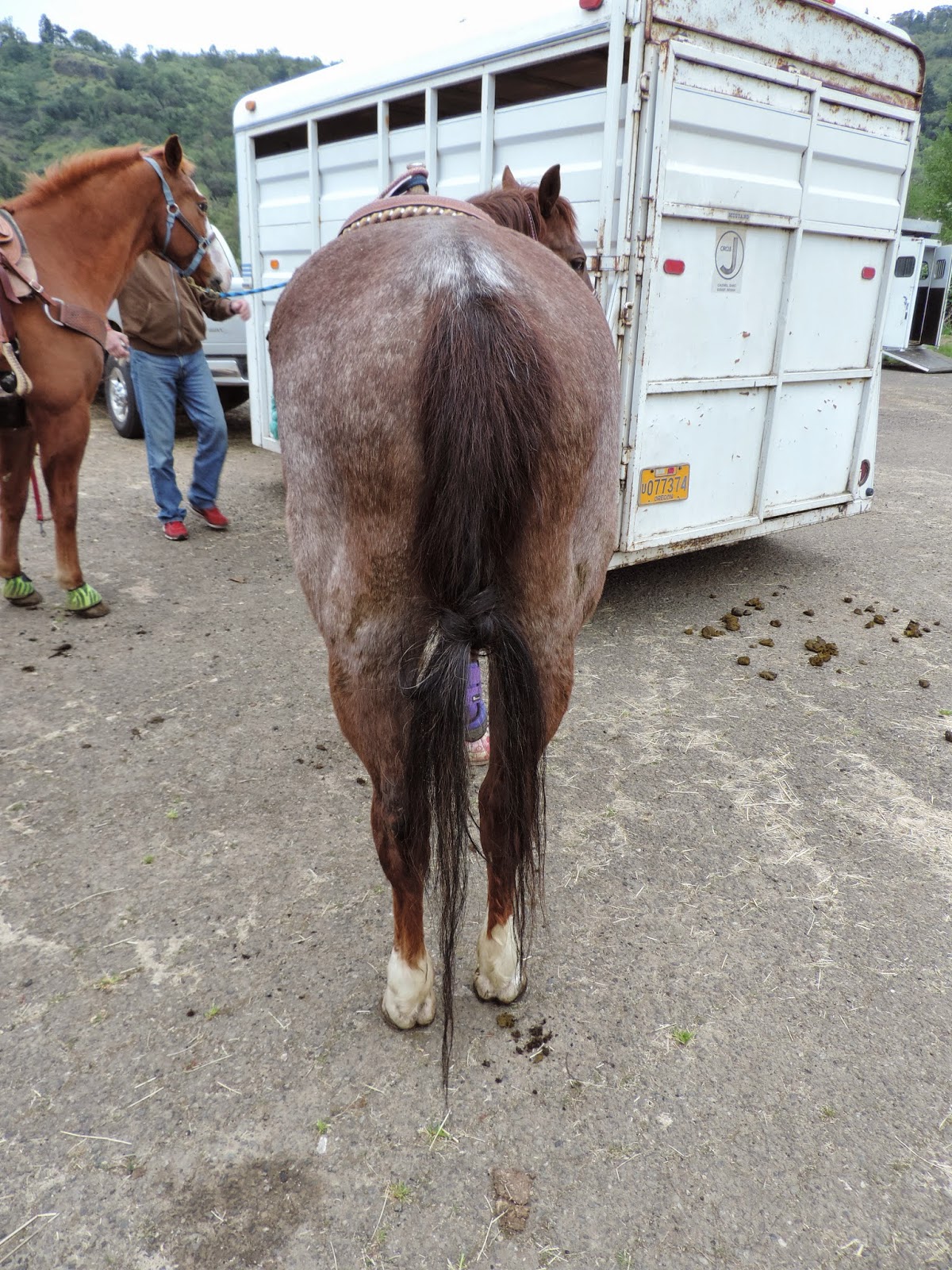 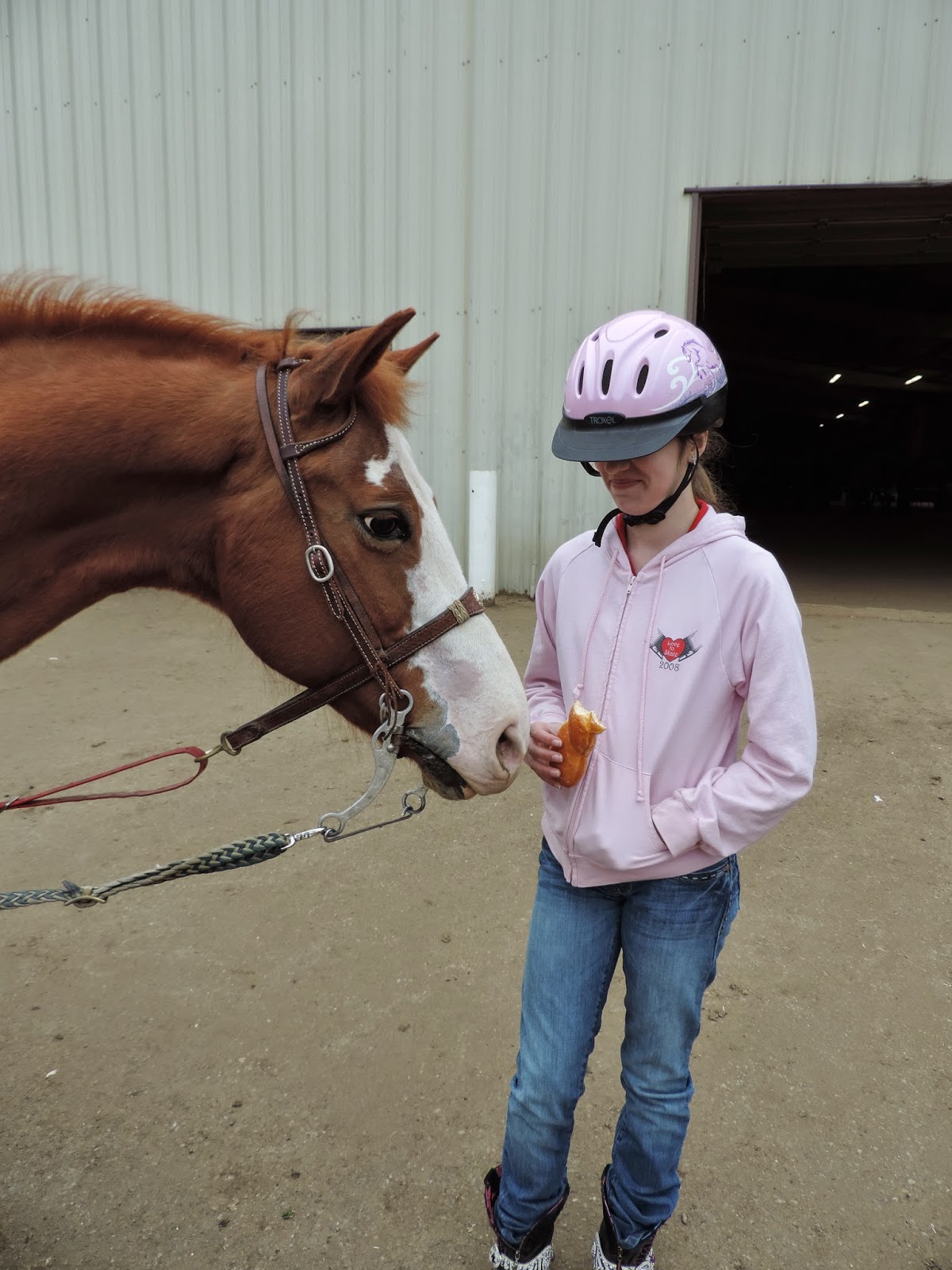 We were at another WHO Show on Saturday, the first one we've been to in Roseburg. It was a small show, which was nice, because it went faster than usual. Alvin thought he needed to have a bite of Brailey's donut in the picture above. It was a bit of a rough day for Brailey - we are still trying to figure out bits and reins and legs and the whole nine yards, but she is going to a barrel clinic soon, and that will help things out. Not to mention we haven't been able to practice at all, which doesn't inspire confidence. So we are going to take a break until we can really focus on riding. It won't be long - summer is almost  here! 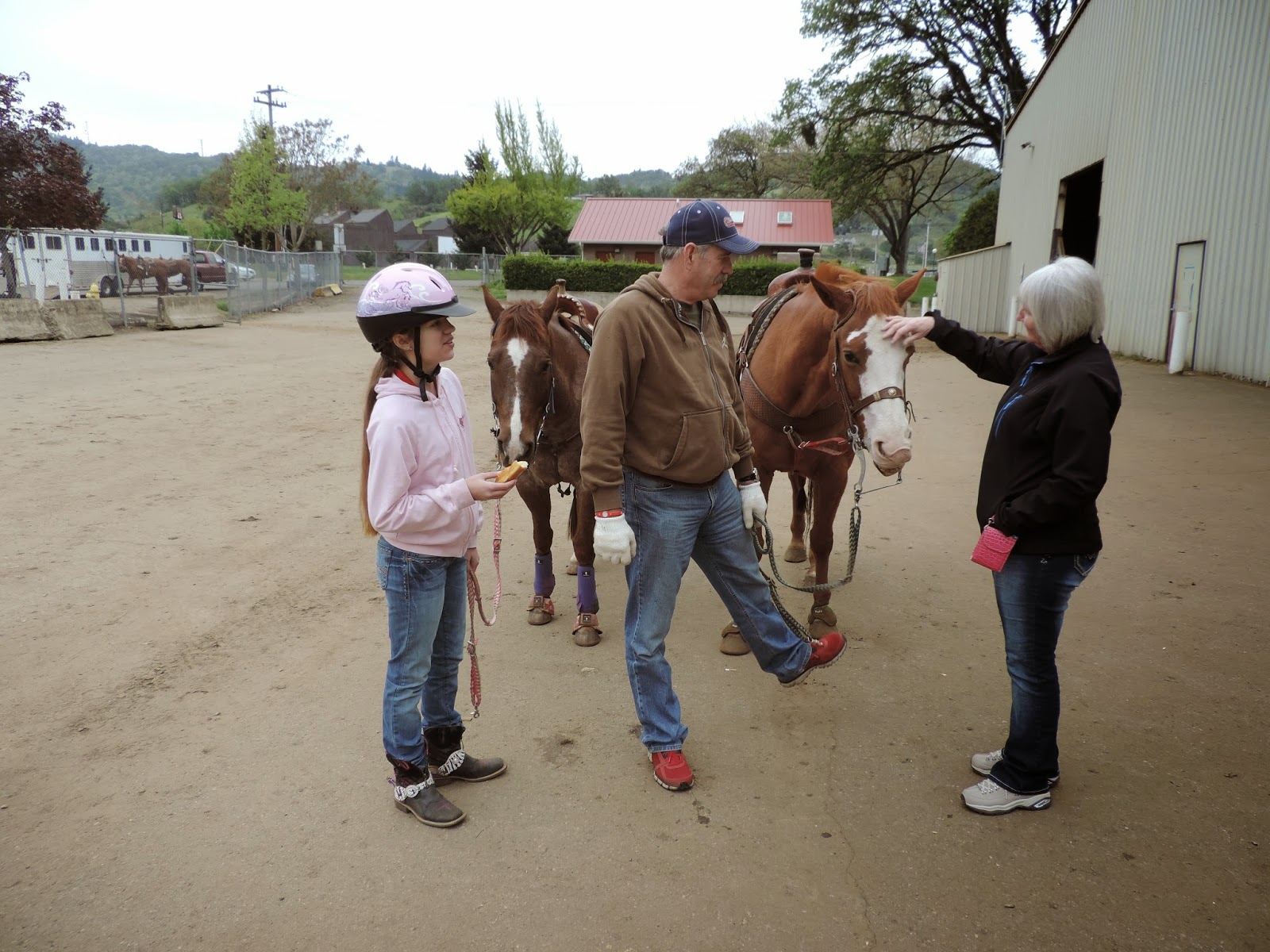 Alvin was the Star of the Day. He took such perfect care of Britt and really did a nice job. Grandma had to give him some love - the horse just insists upon it! He loves attention. 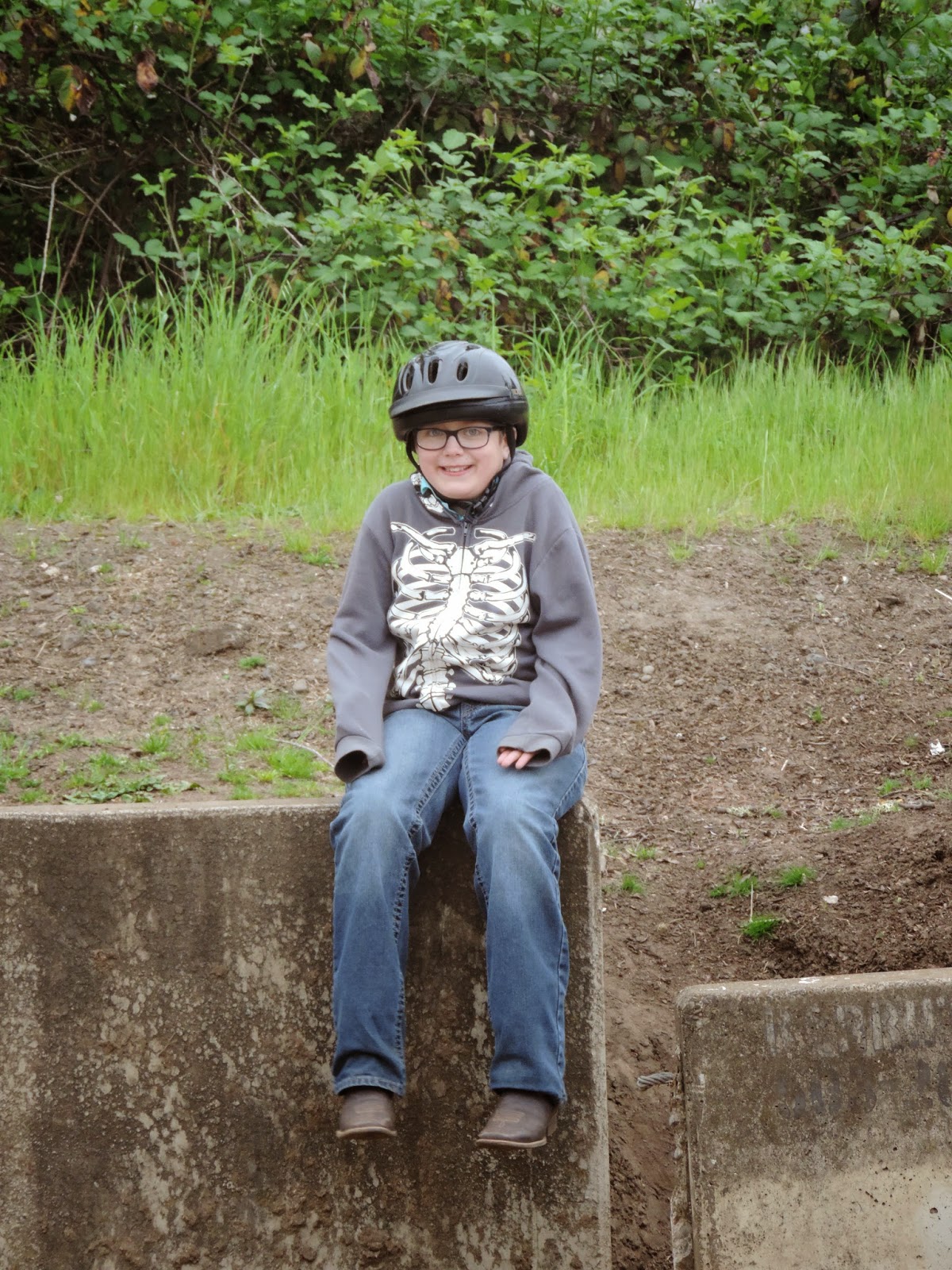 And Britt was the Pee Wee Champion for the day! Granted, it was a small class, and he did have a mishap during the Figure 8 (forgot the pattern). But he and Alvin rallied and came away with top honors and a dollar bill! It was super cute, because Britt knew it was an easy class, but it was still good for his ego, because he's never won anything! So Brady called him "Champ" for the rest of the weekend, and Britt basked in the glory of winning. 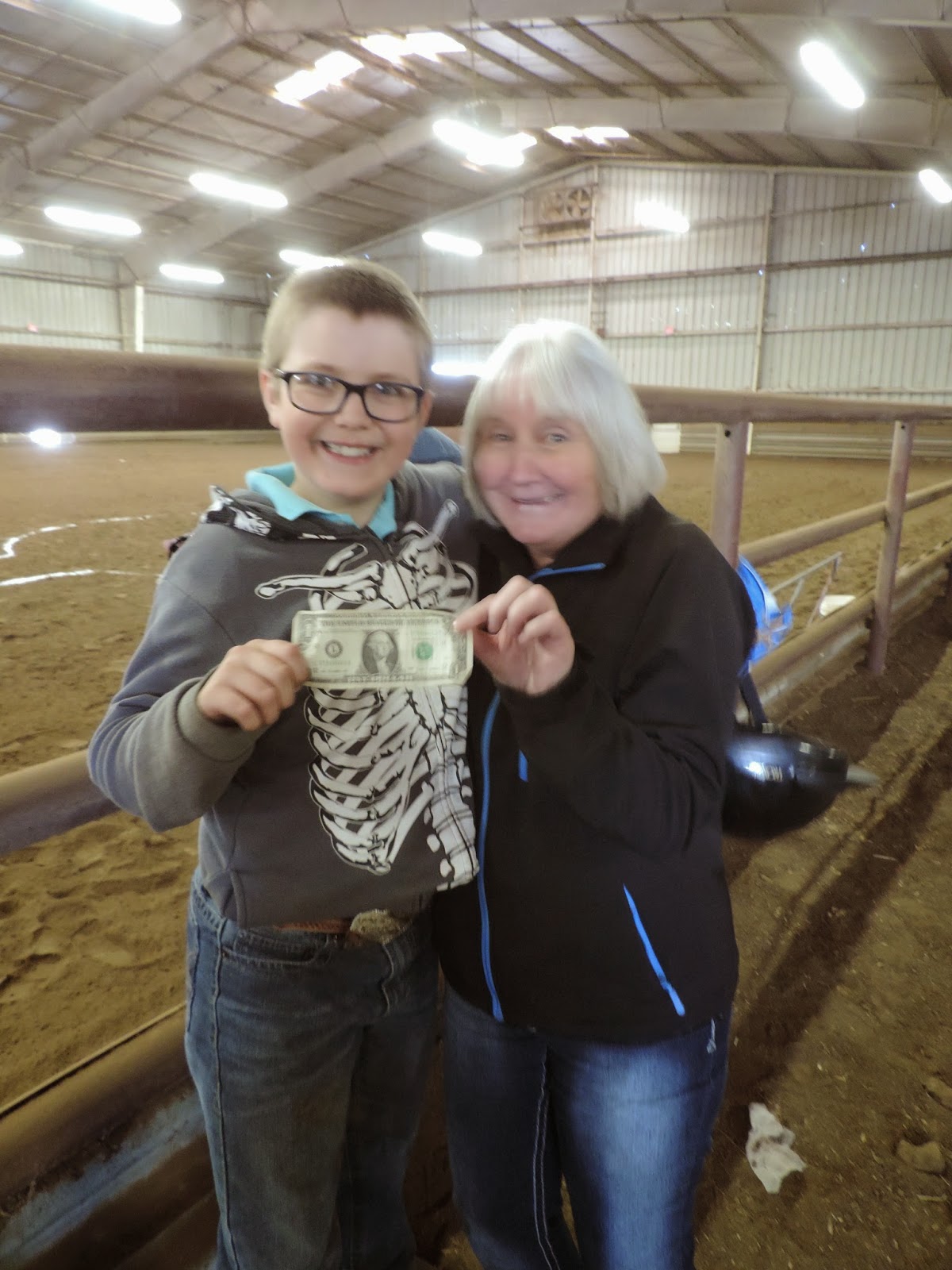 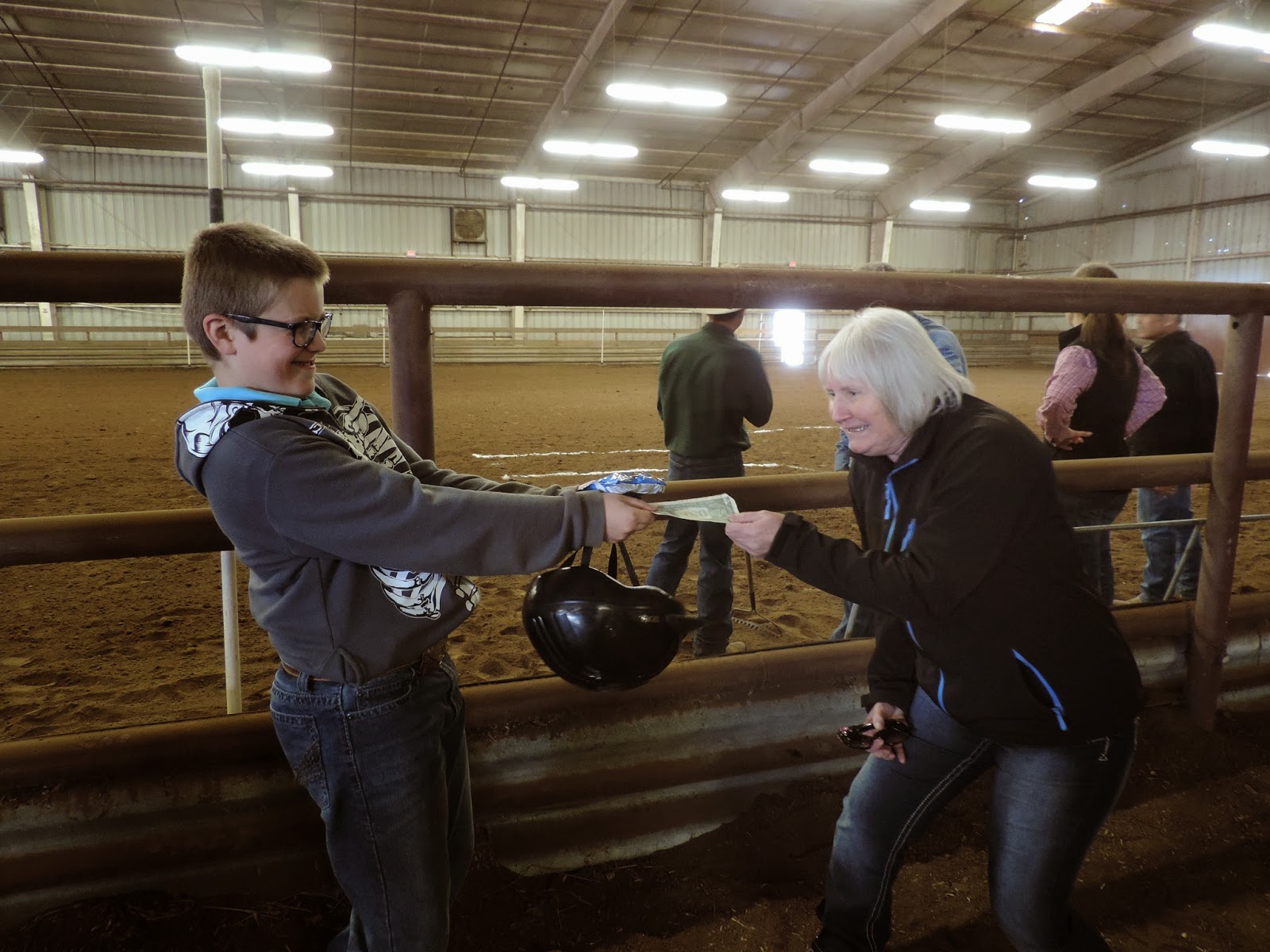 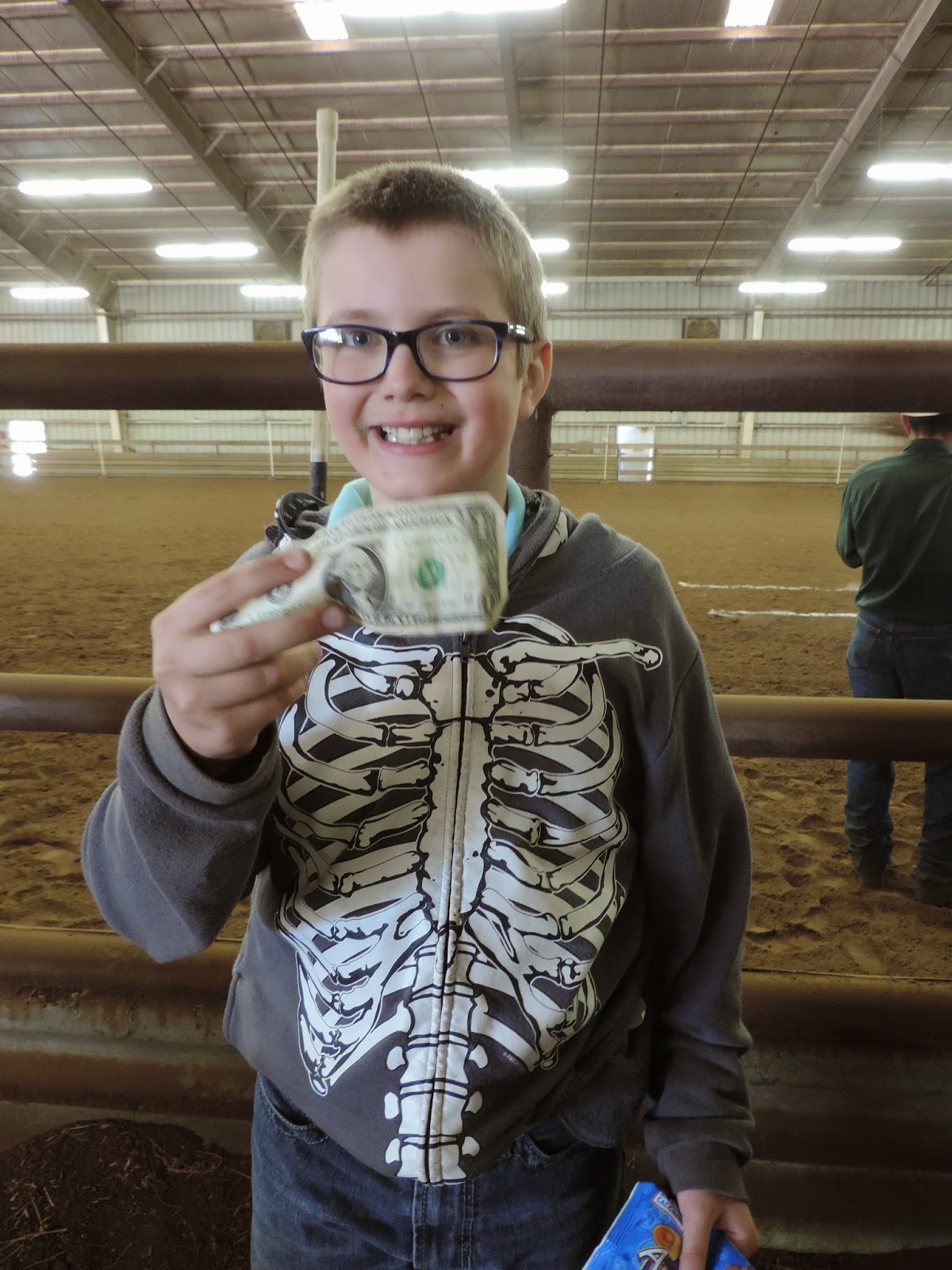 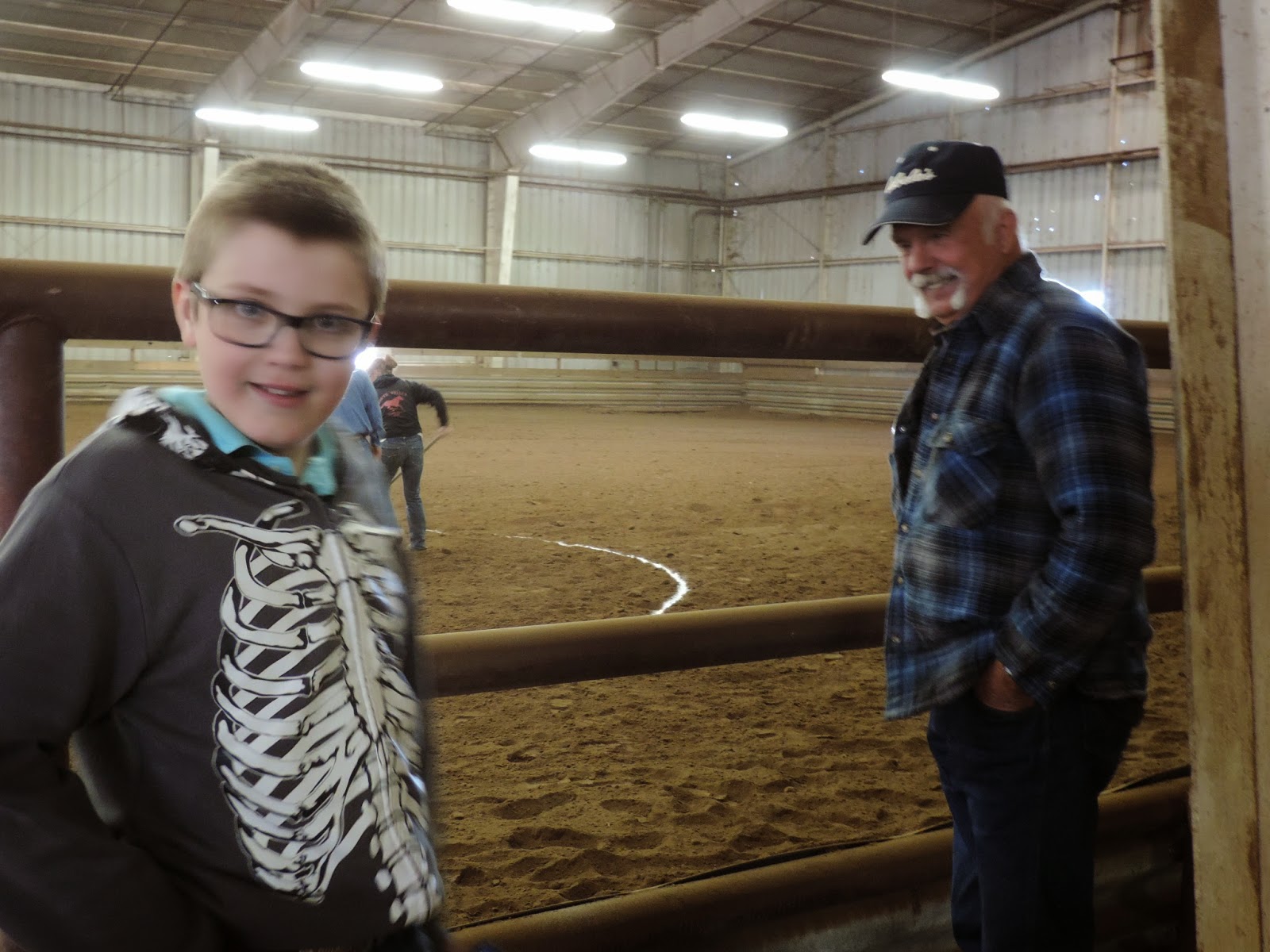 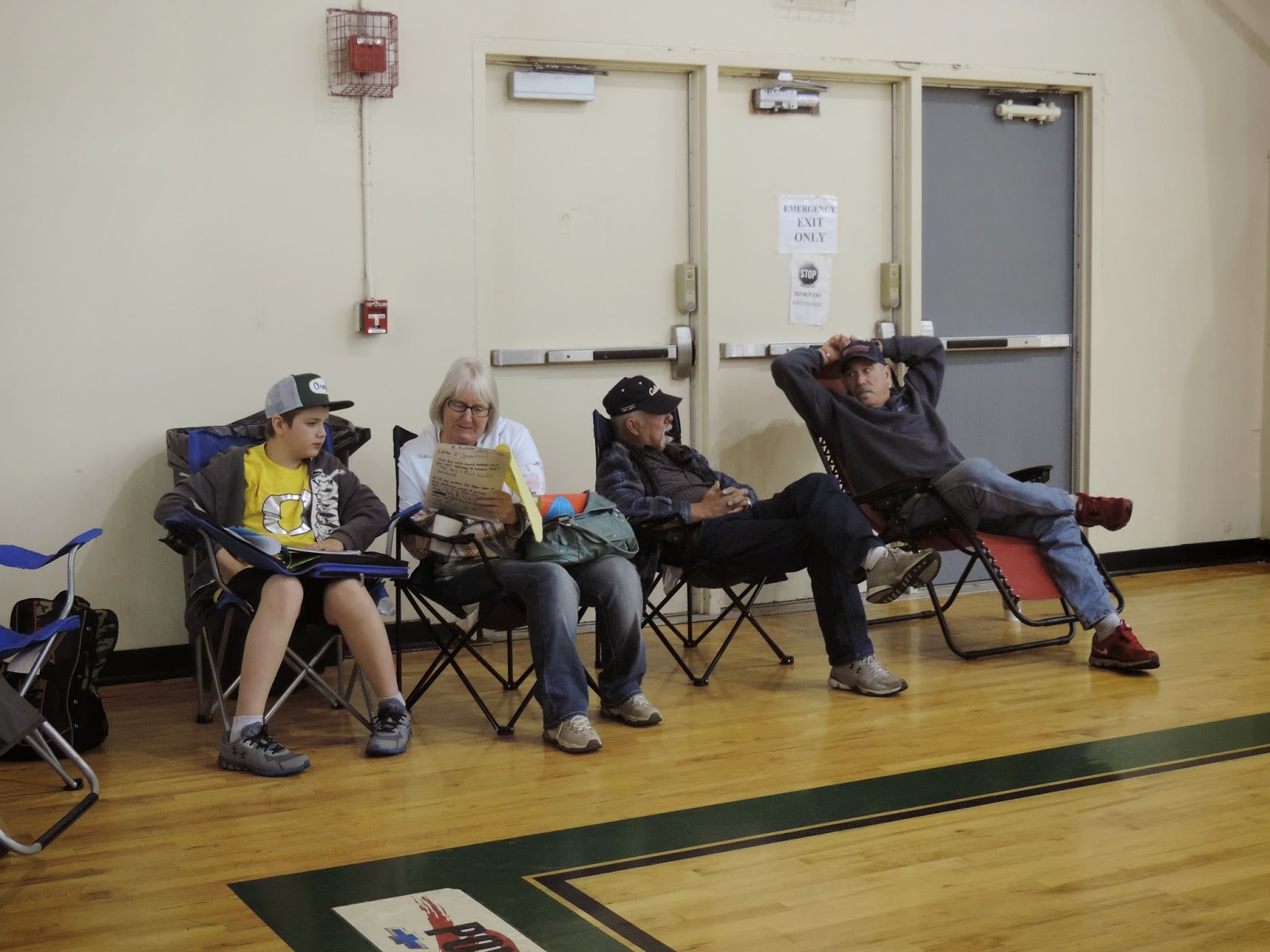 And then we went to Salem for volleyball on Sunday. Generally, our tournaments have been over by 3 or 4 in the afternoon. But not this one. This one went from 8 in the morning until 6 in the evening! LONG DAY! But it was a great day - Brailey played really, really well and so did her team. They have never looked better! 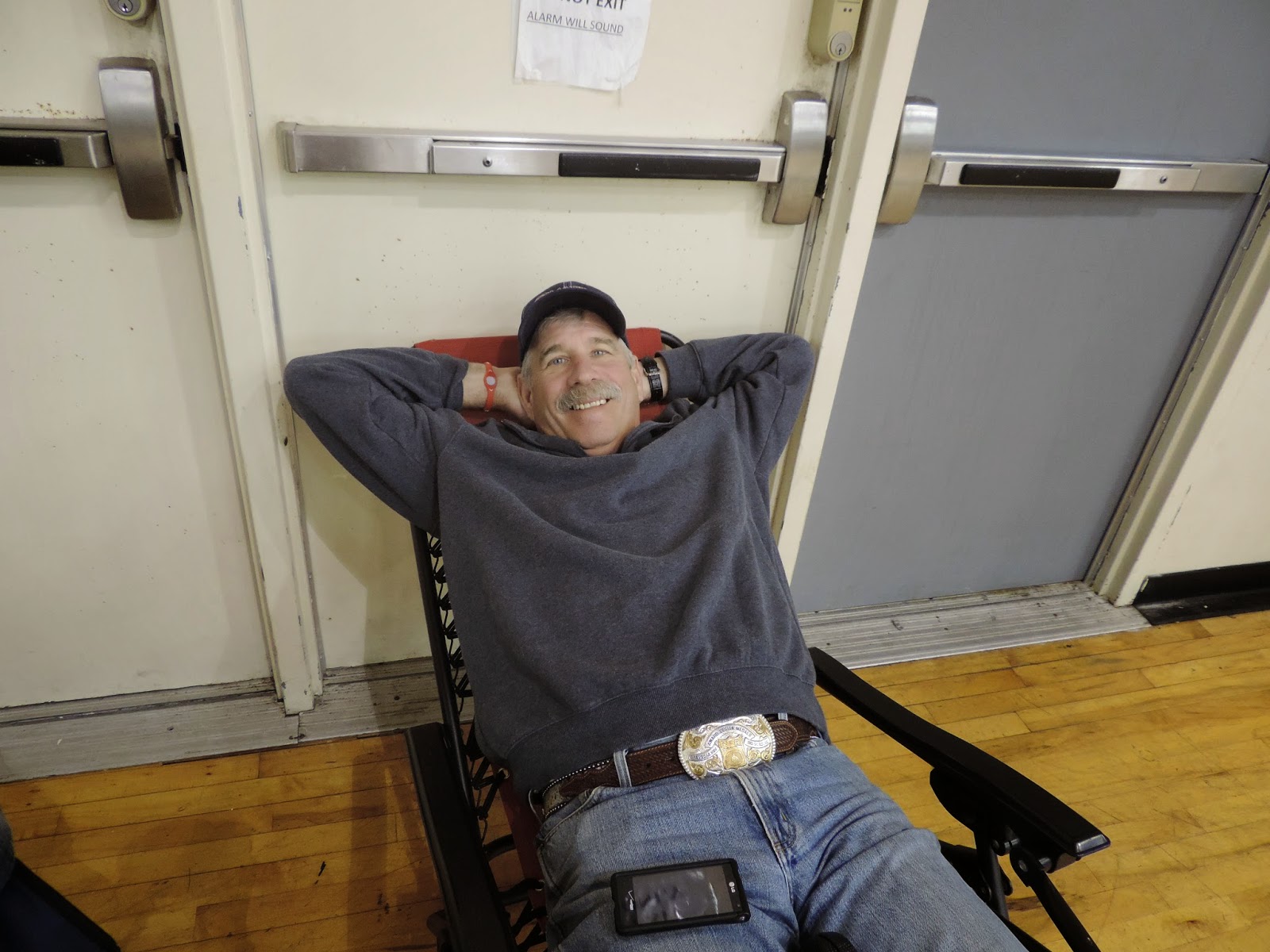 Brady enjoyed his new "Volleyball Chair." It is like a recliner and super comfortable! 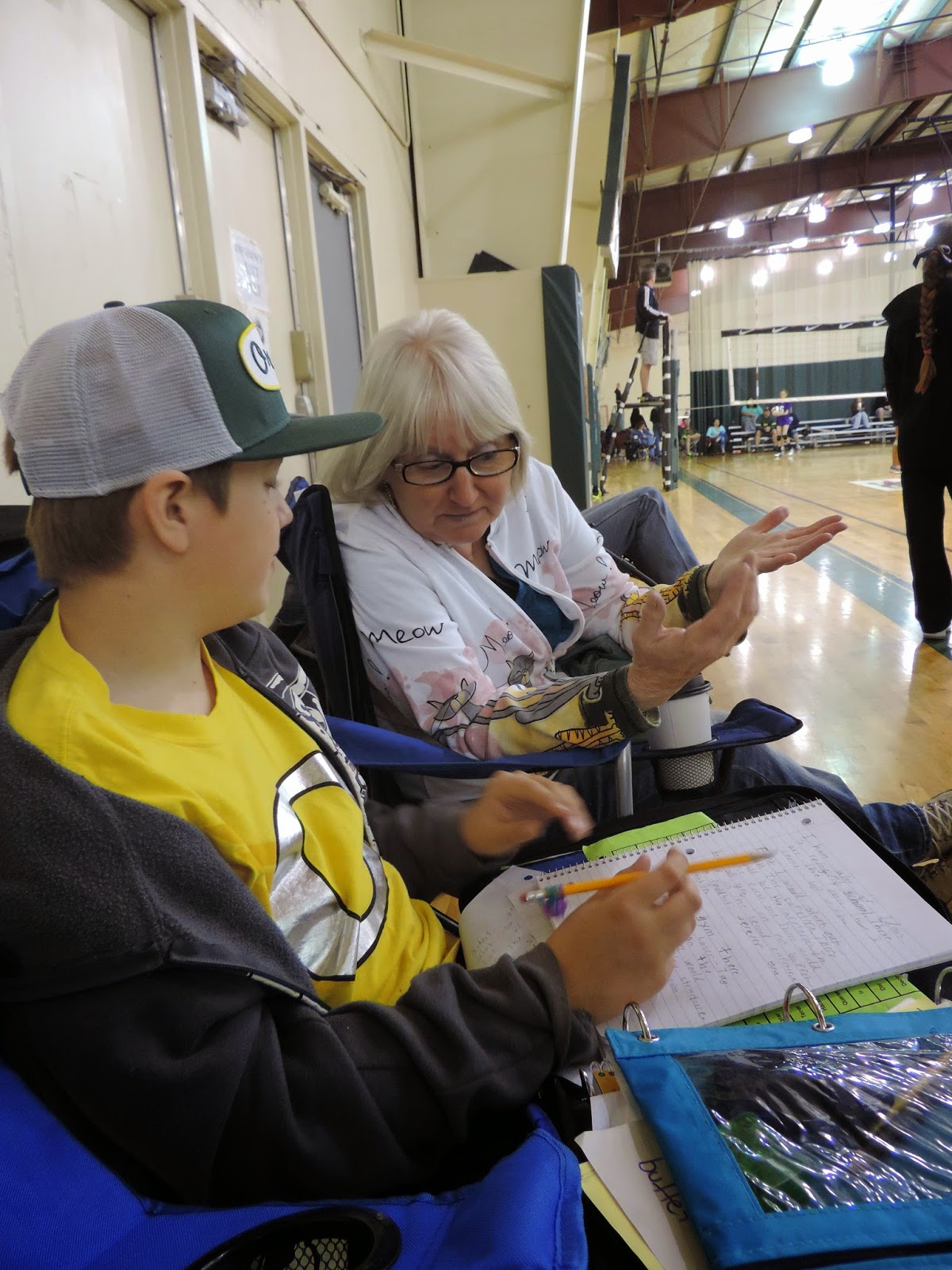 Britt had homework to do - rewriting a story. Lucky for him, Grandma was there to help. Interestingly enough, he listens much better to her than to his mother... Go figure! 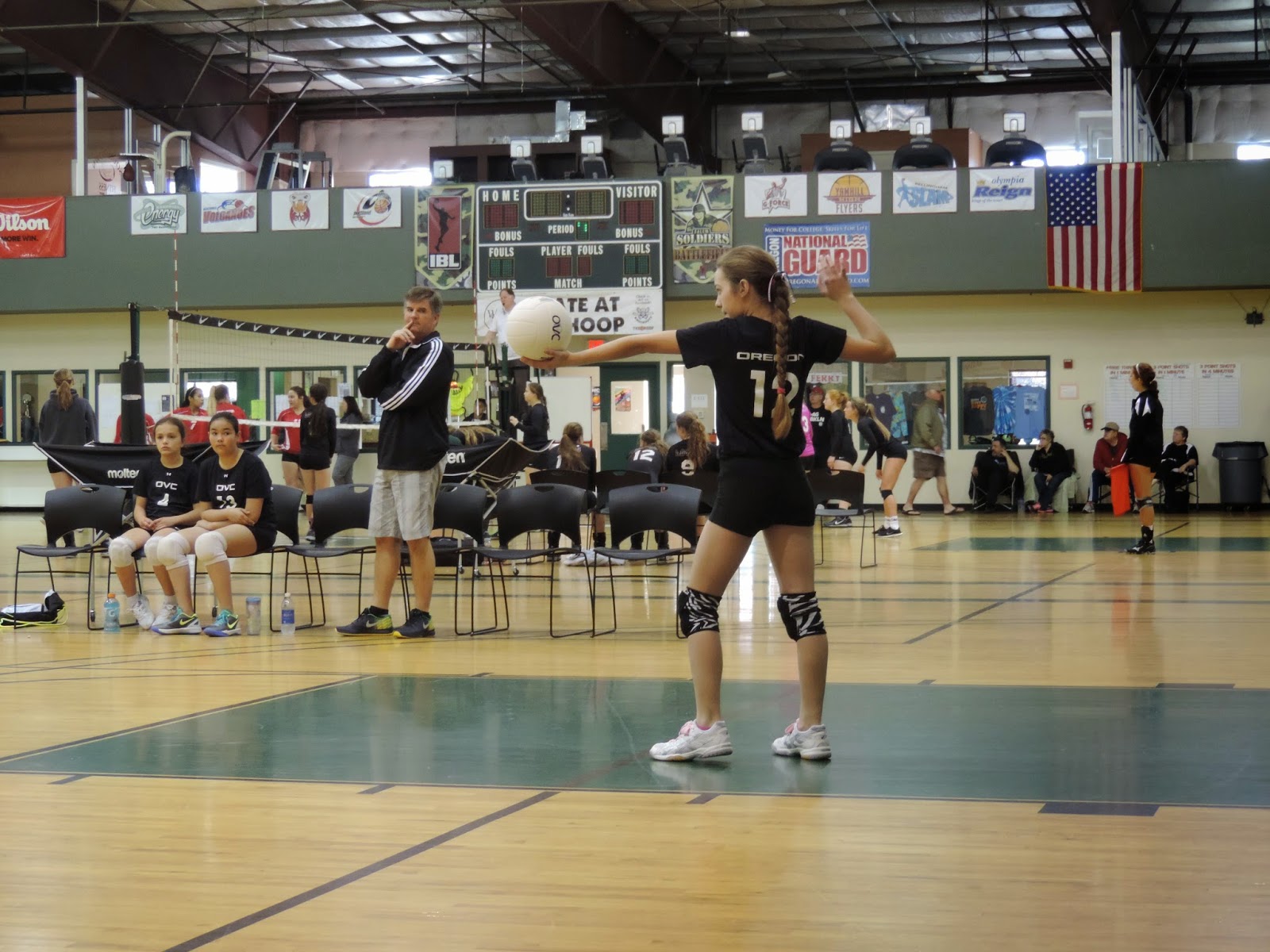 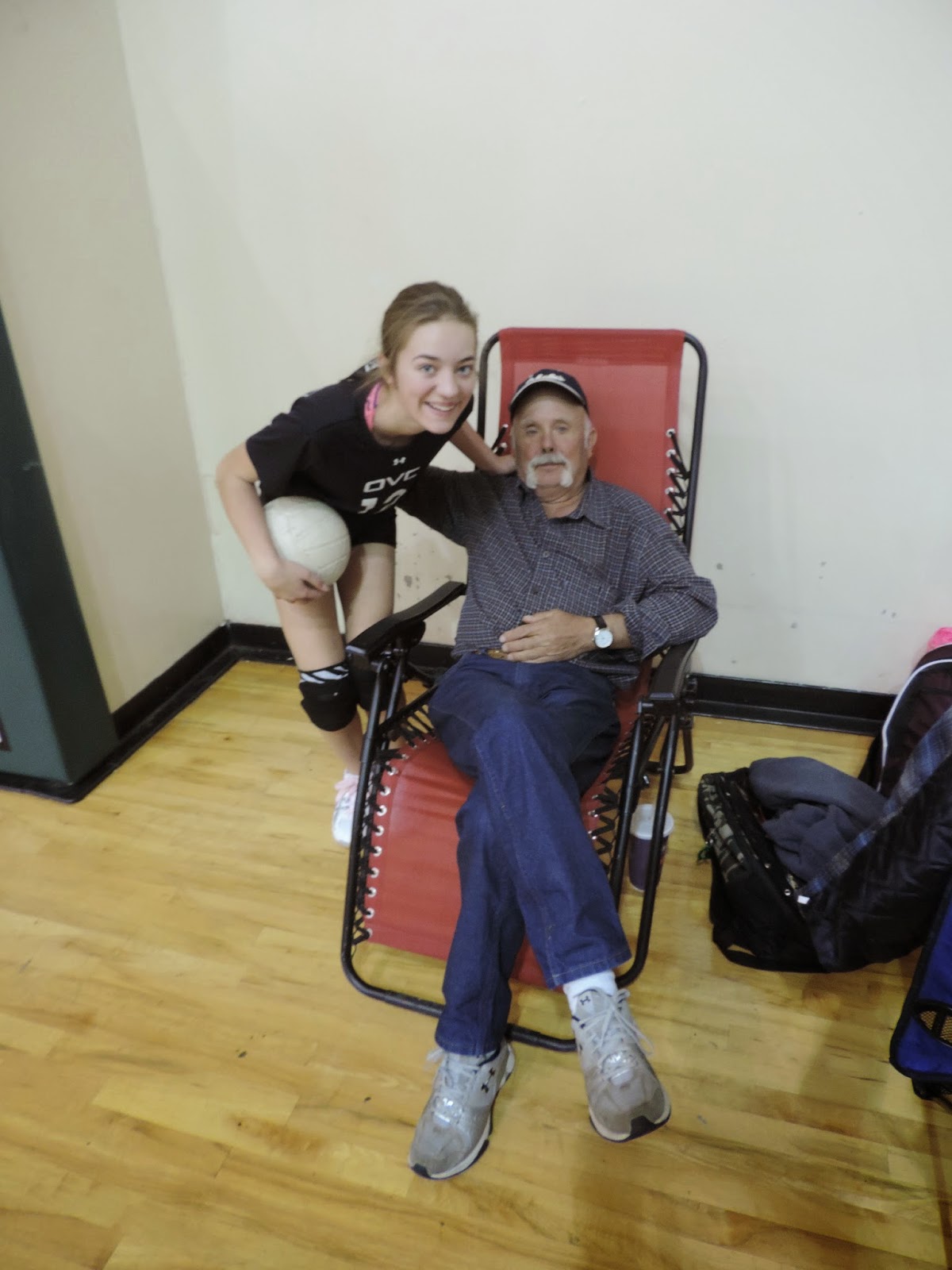 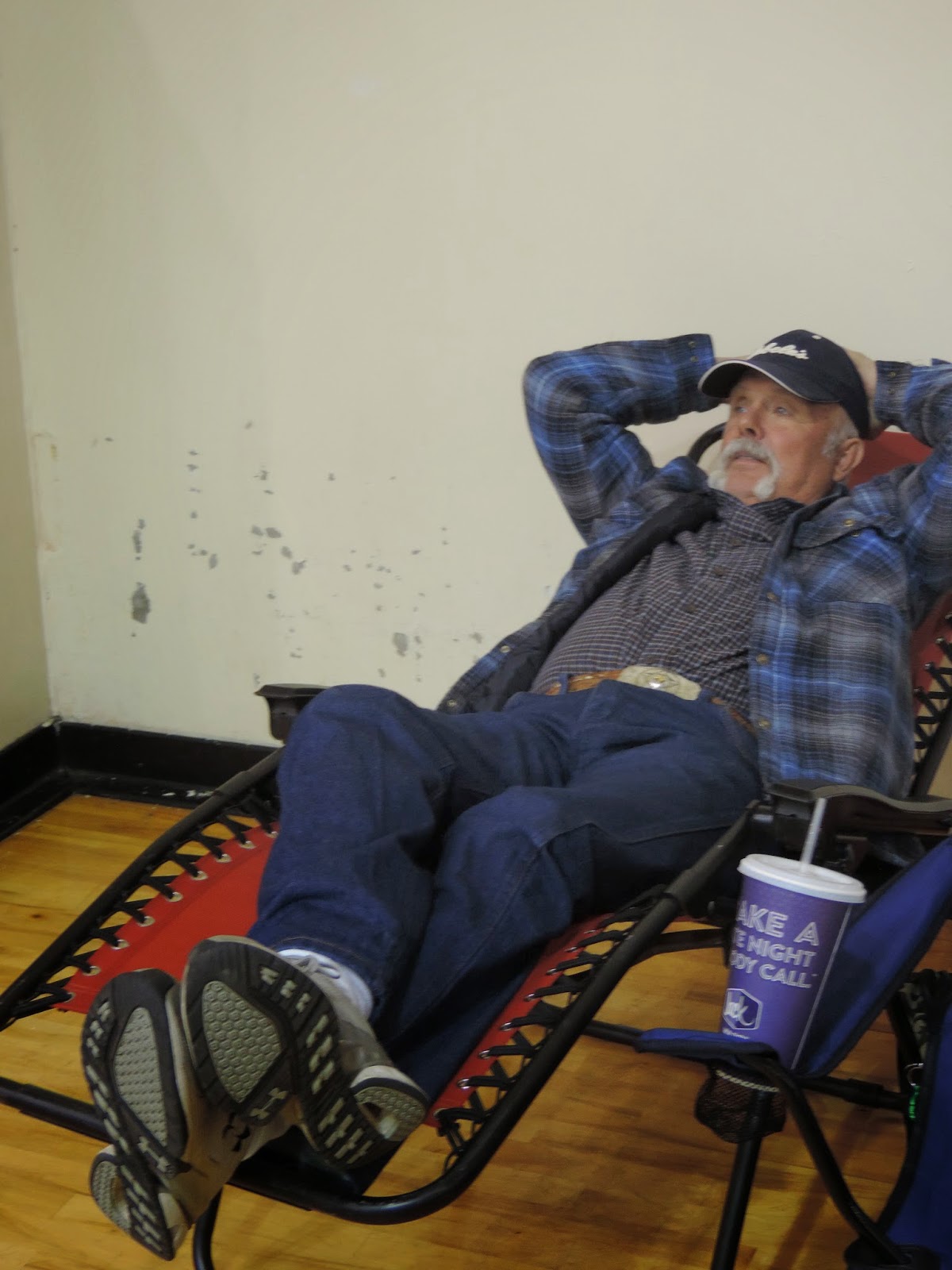 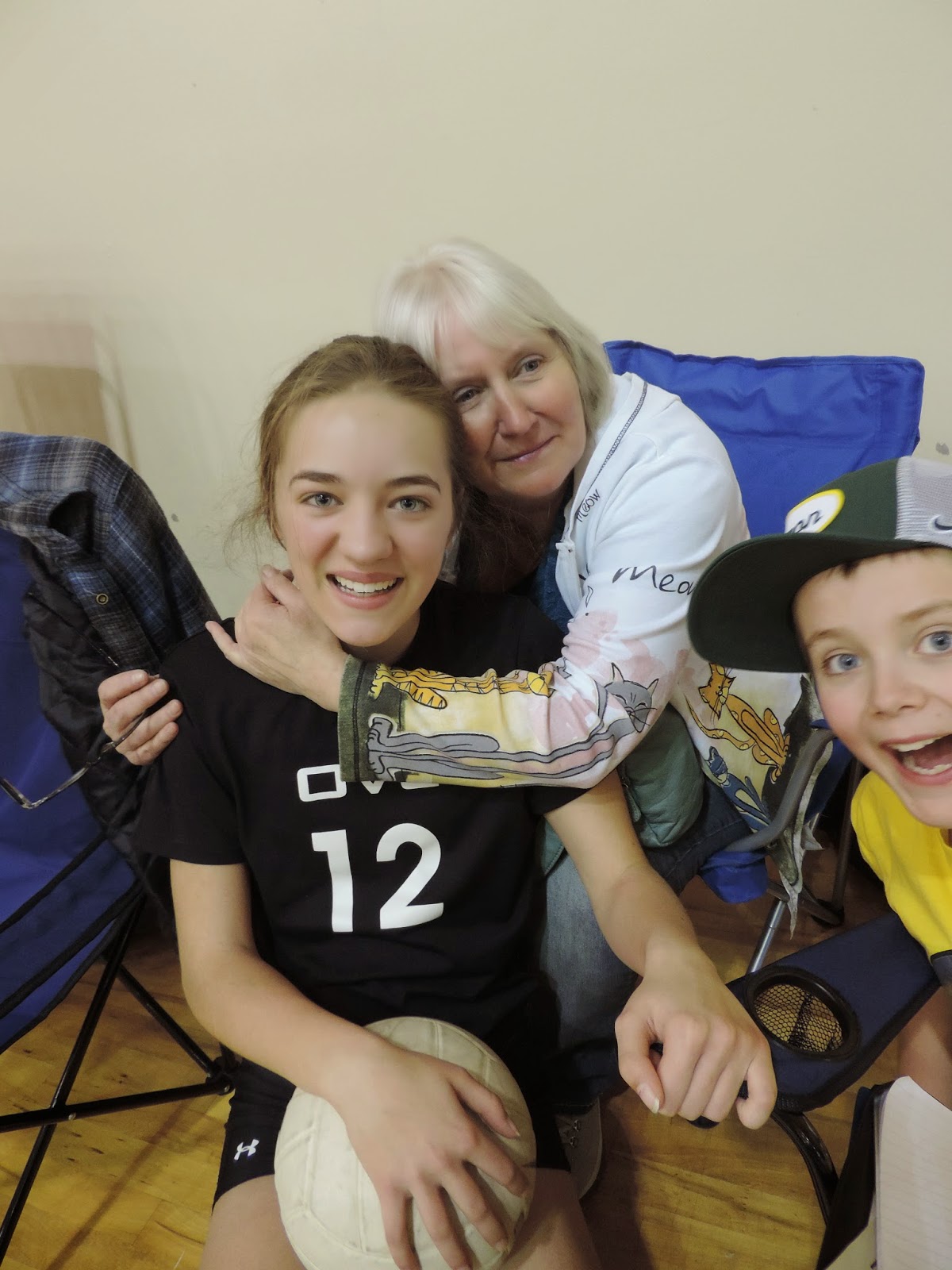 Britt the photo-bomber...! Still a great picture of Brailey and Grandma, though. 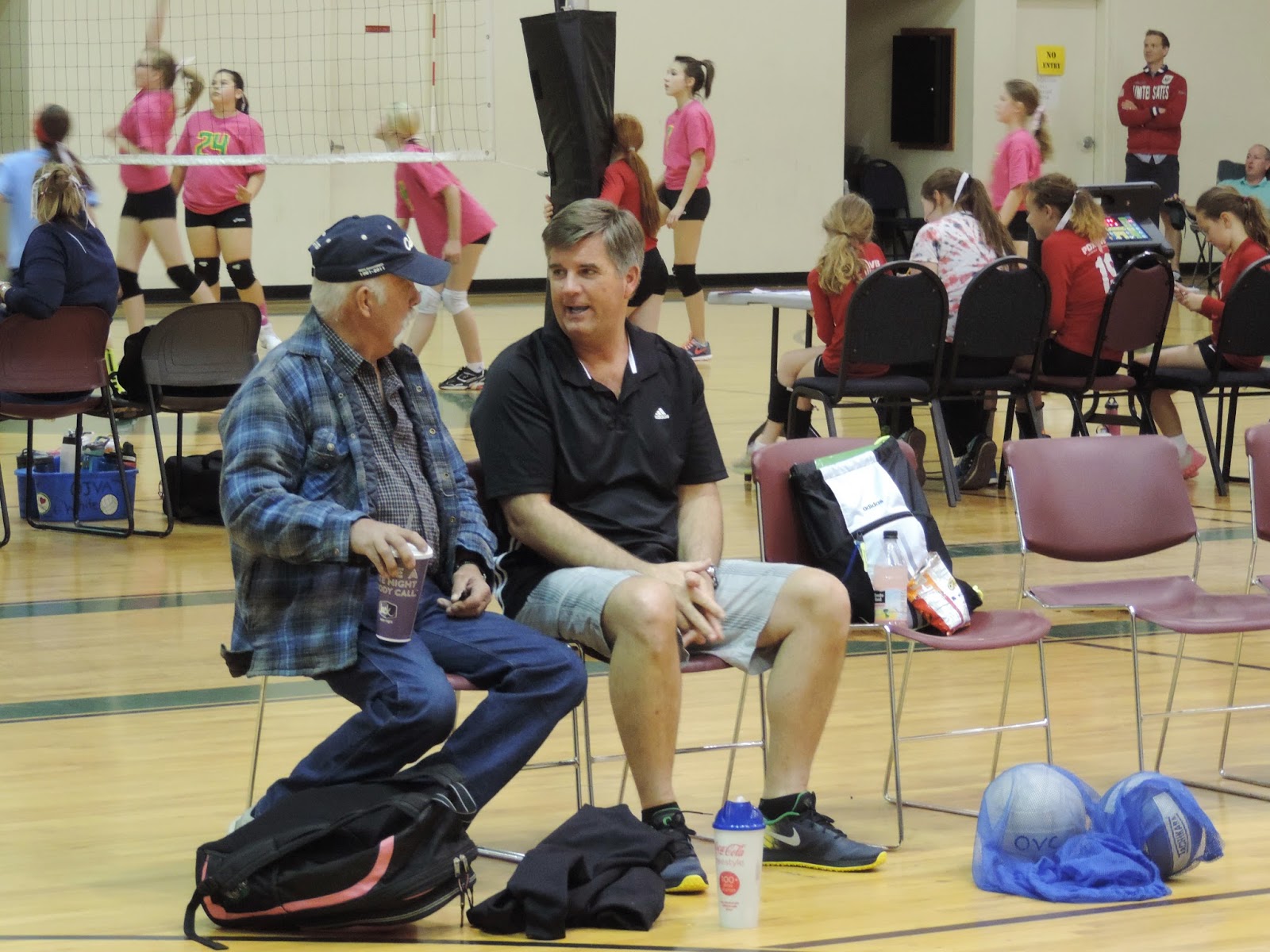 Papa was very impressed with Rick, Brailey's coach. He took a moment to tell him what a good job he is doing. We had the loudest cheering section at the entire tournament! Papa saw what the team needed right off the bat - enthusiasm! 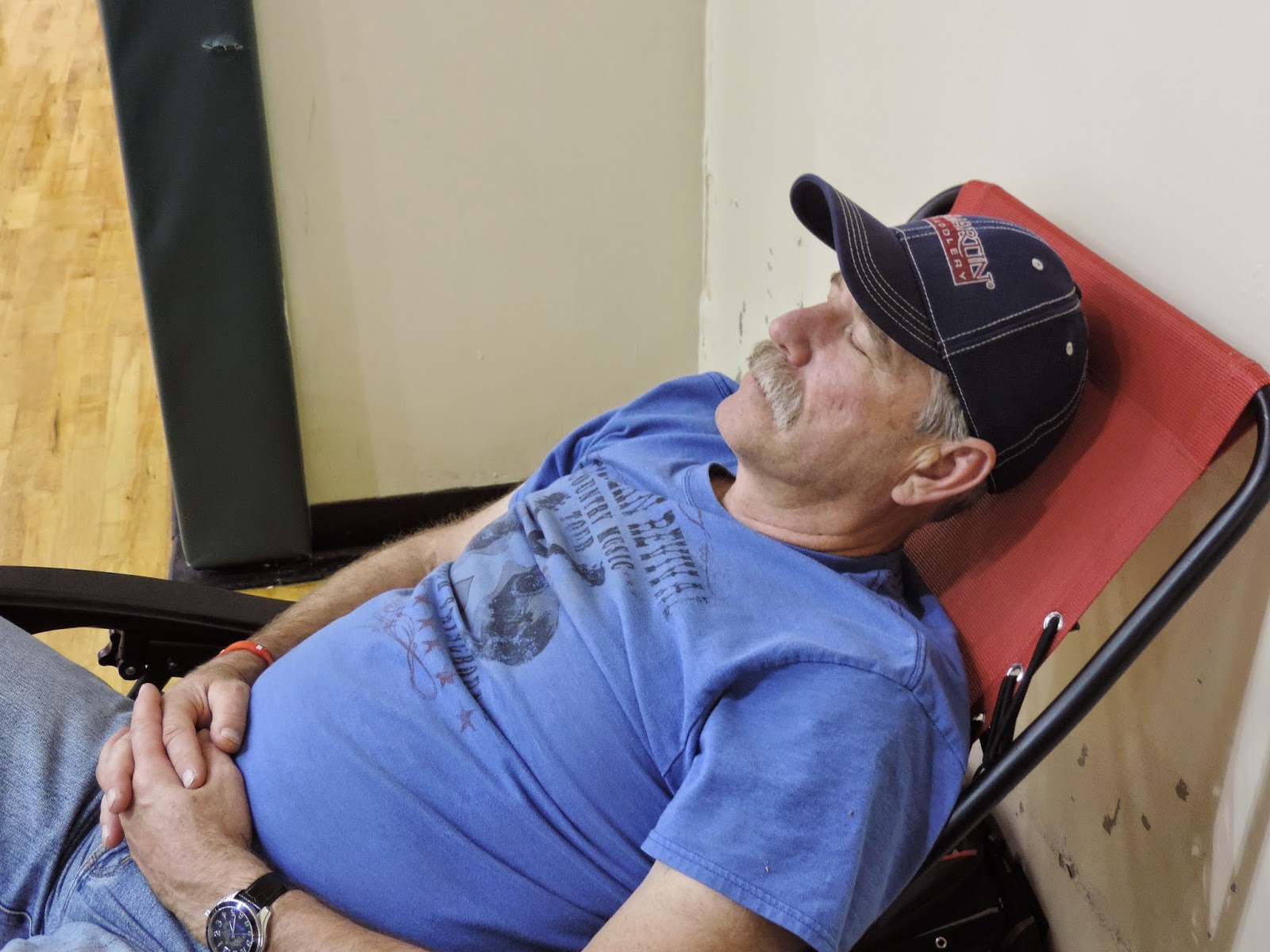 The Volleyball Chair is so comfortable, Brady even managed to get a nap in between games! 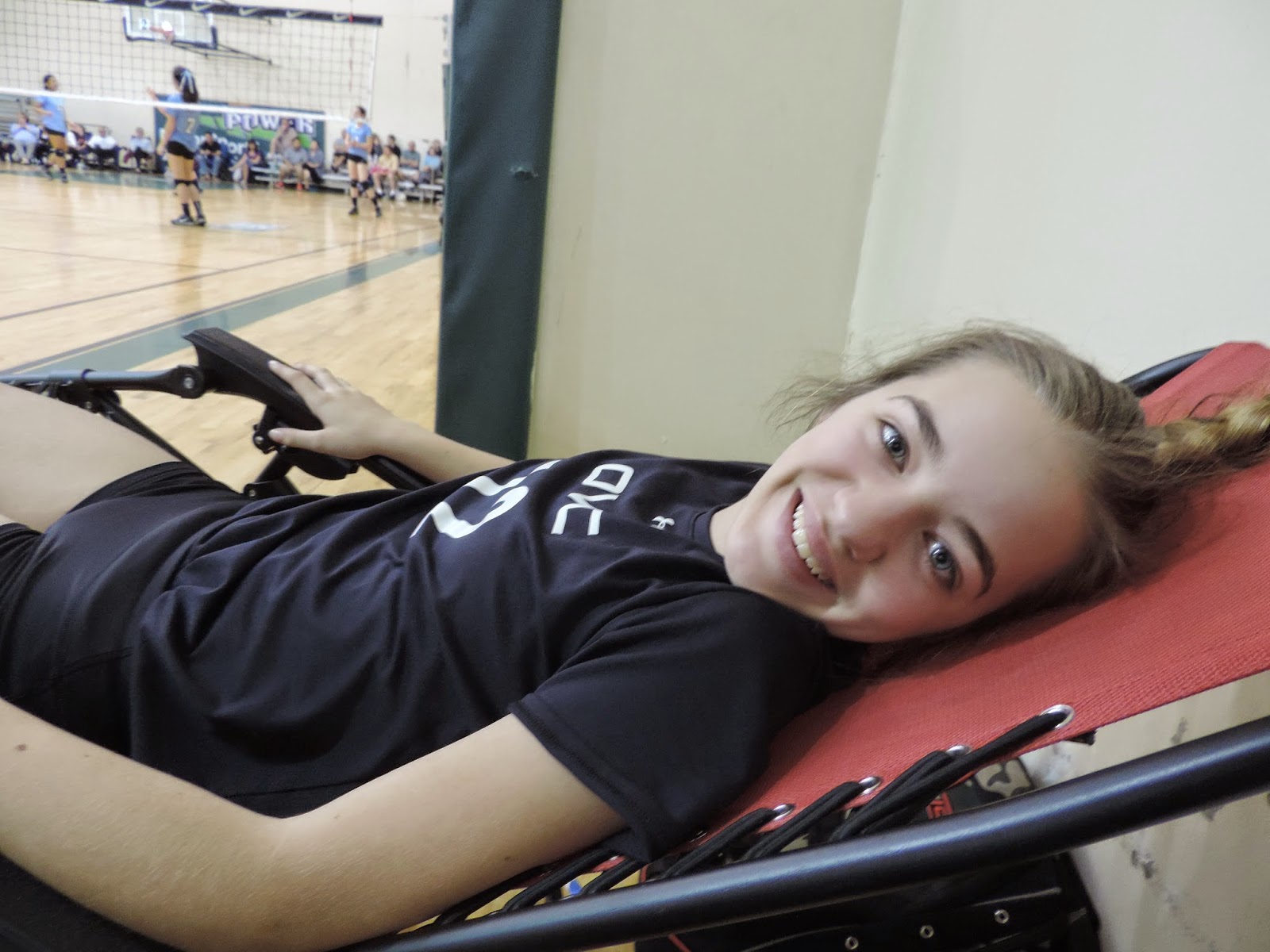 Brailey managed to sneak a turn on it, as well. She and her good friends were having a wonderful time discussing all manner of things. They are good buddies, and it has been so great to see Brailey make new friends who are nice girls. 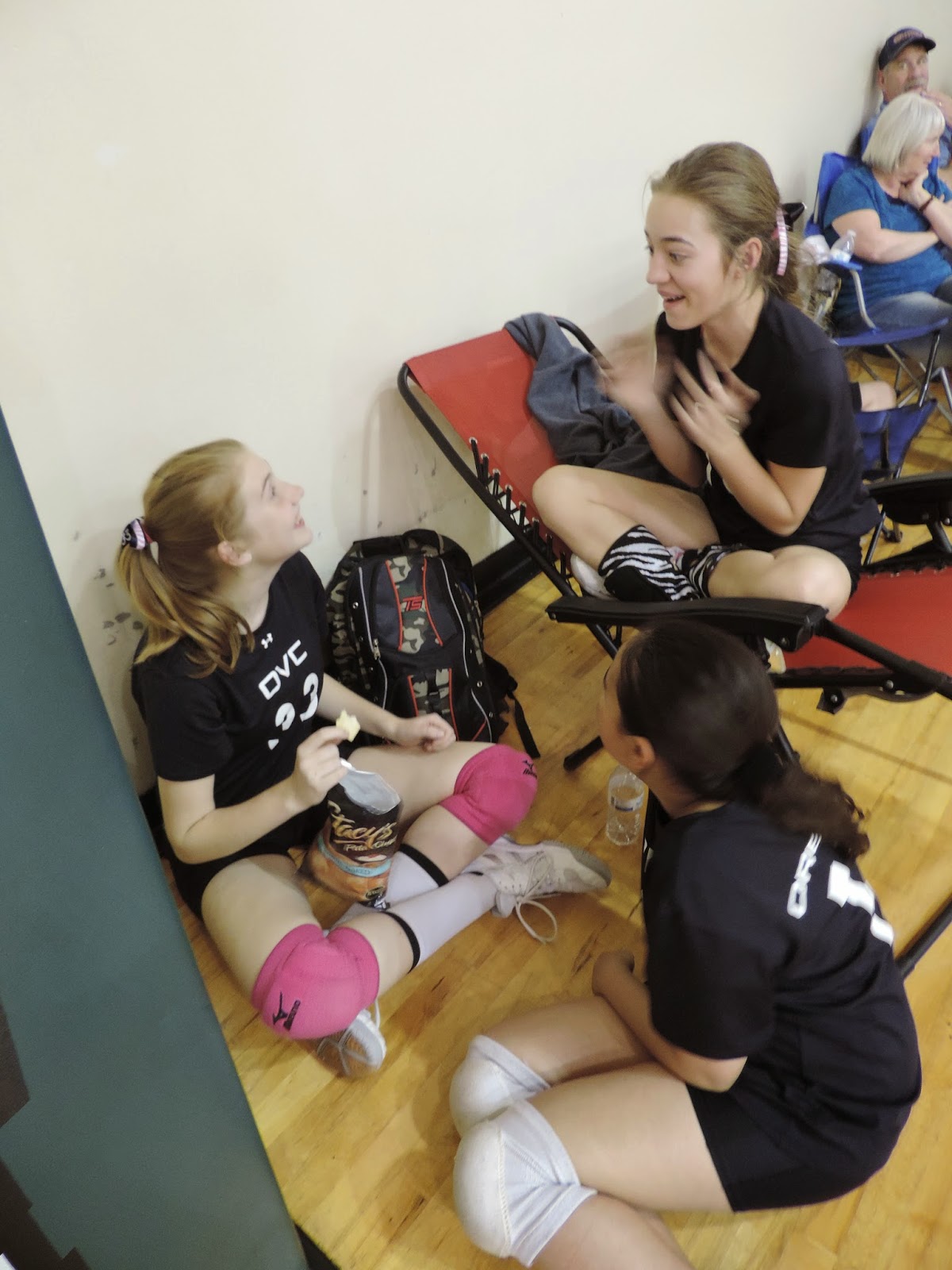 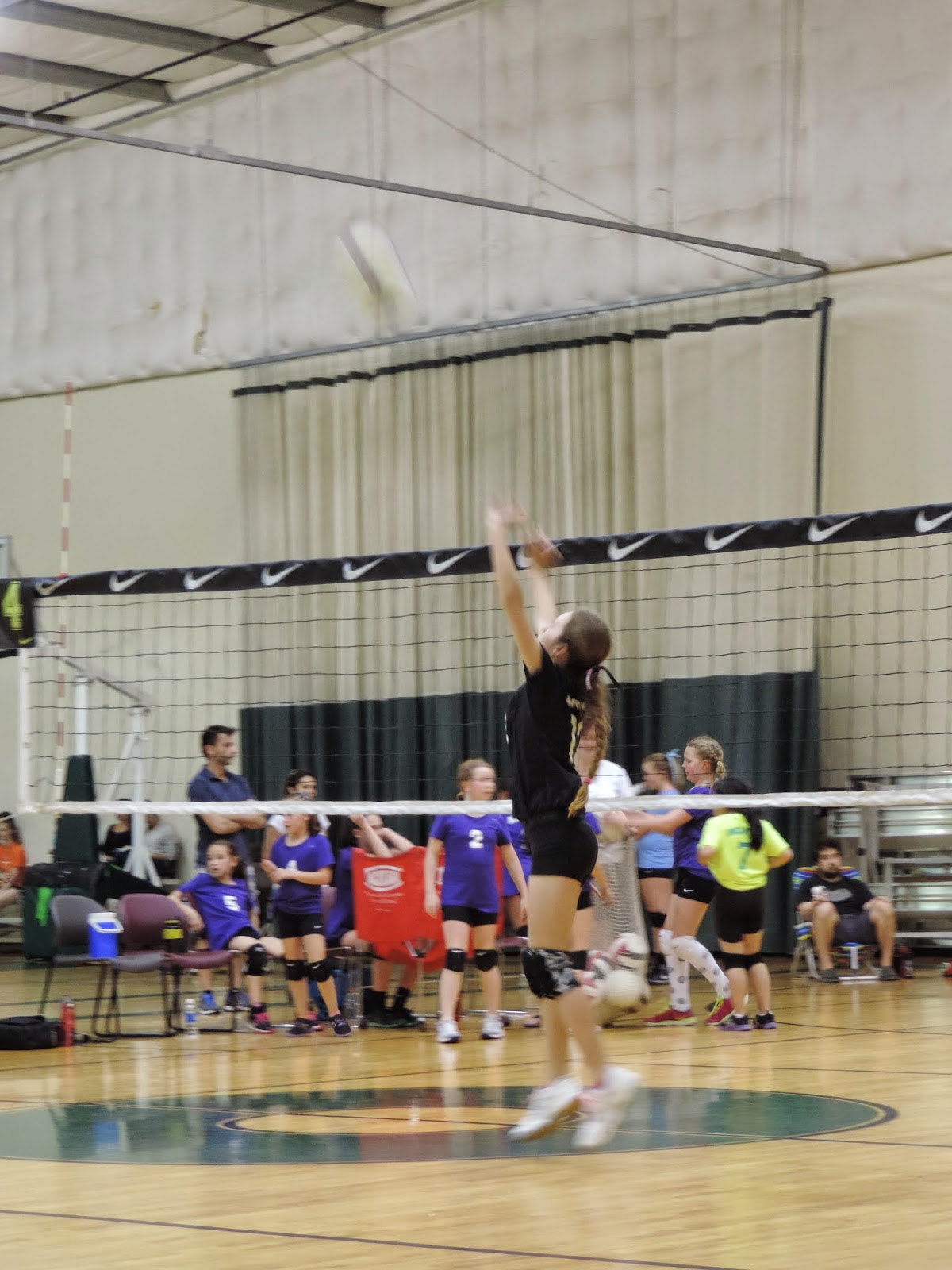 The setter! She did a great job all day long. Her team played really, really well, and we are all so proud of them! We also had a wonderful time with Grandma and Papa. On Monday, we managed to hit St. Vinny's, get all the stalls cleaned, get the vehicles washed and my mom even got all the cobwebs off the side of my house and the patio swept! We didn't do much but visit, but it was a great day, full of sunshine and love. We hated to see them go, but hopefully it won't be so long between visits. Seven and half months is TOO LONG. Anyway, back to the grindstone! It's a busy, busy life, but a good one. It was great to take a day to stop and "smell the roses," and to just BE.
at April 16, 2014