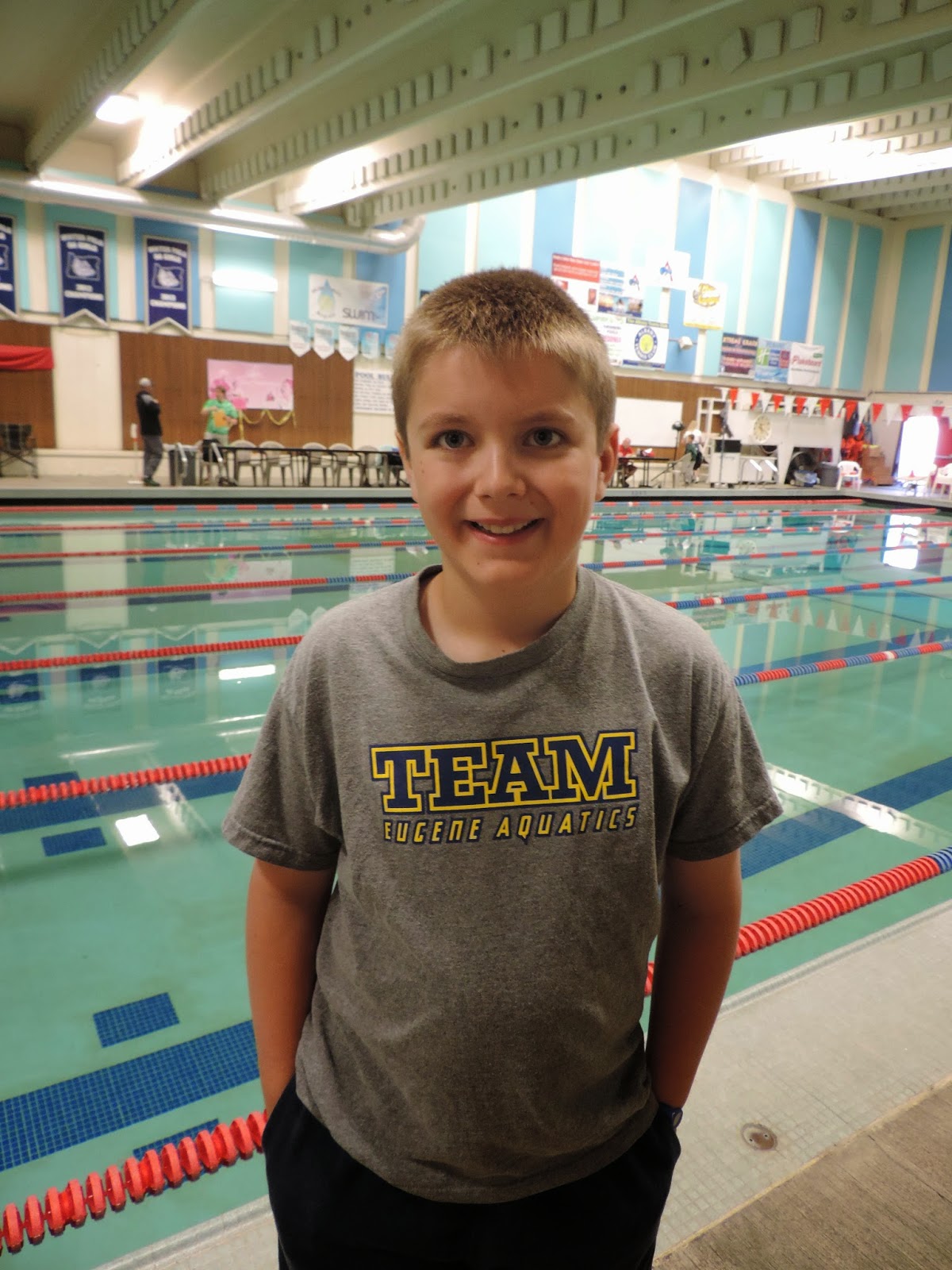 No, things don't always go as planned. Sometimes, for example, you catch a bug and get sick! Poor Britt - he had been looking forward to his swim meet, his first at a 50 yard pool, for weeks. He's been the supportive brother the past few months, sitting through many volleyball games. It was his turn! Sadly, he woke up with a sore throat Saturday morning, but no fever. So while Brady and Brailey headed to Scappoose to a barrel racing clinic, Britt and I made our way to Albany for his swim meet. 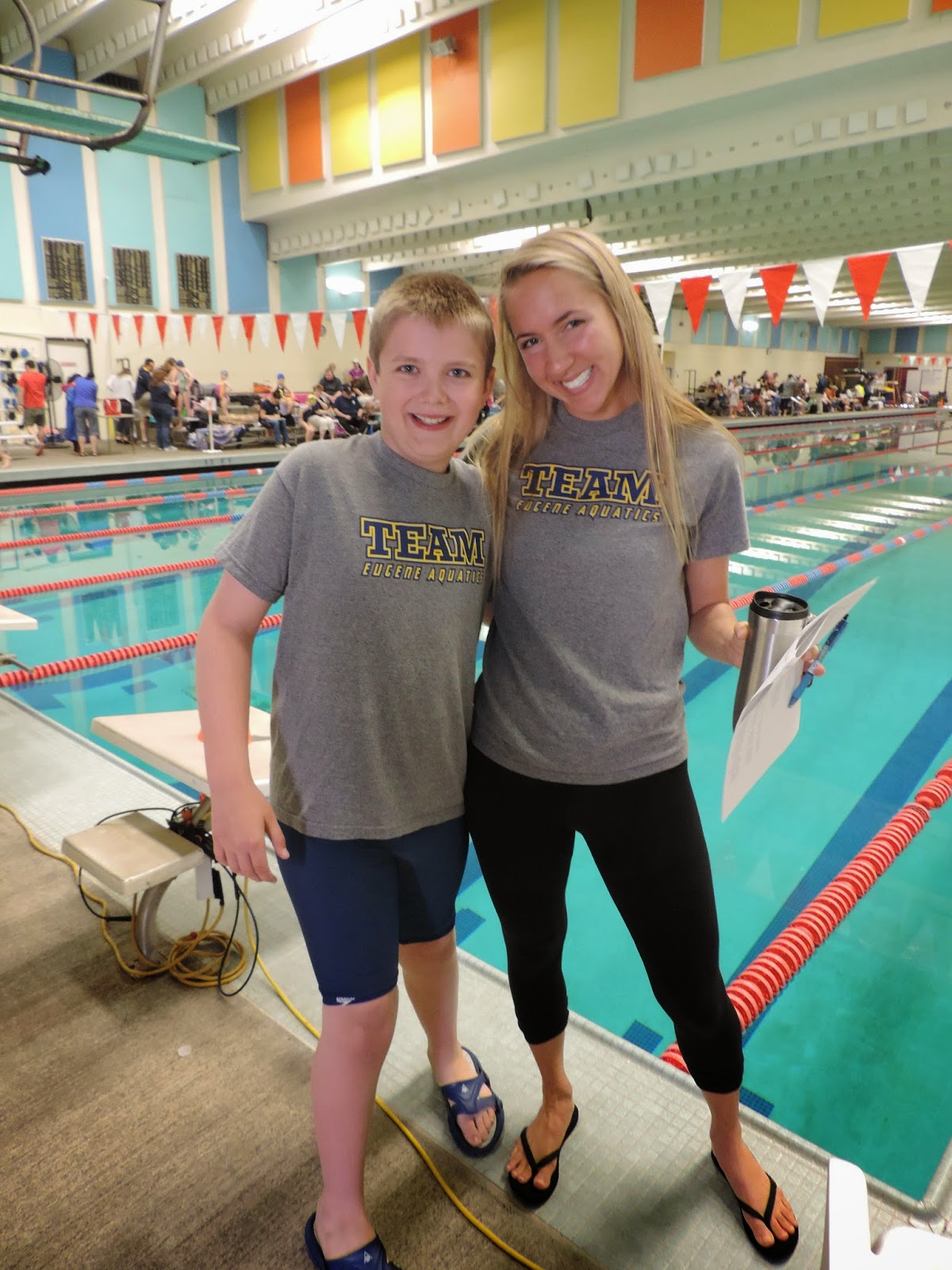 Here he is, with his beloved coach, Coach Britta. They had matching shirts on! 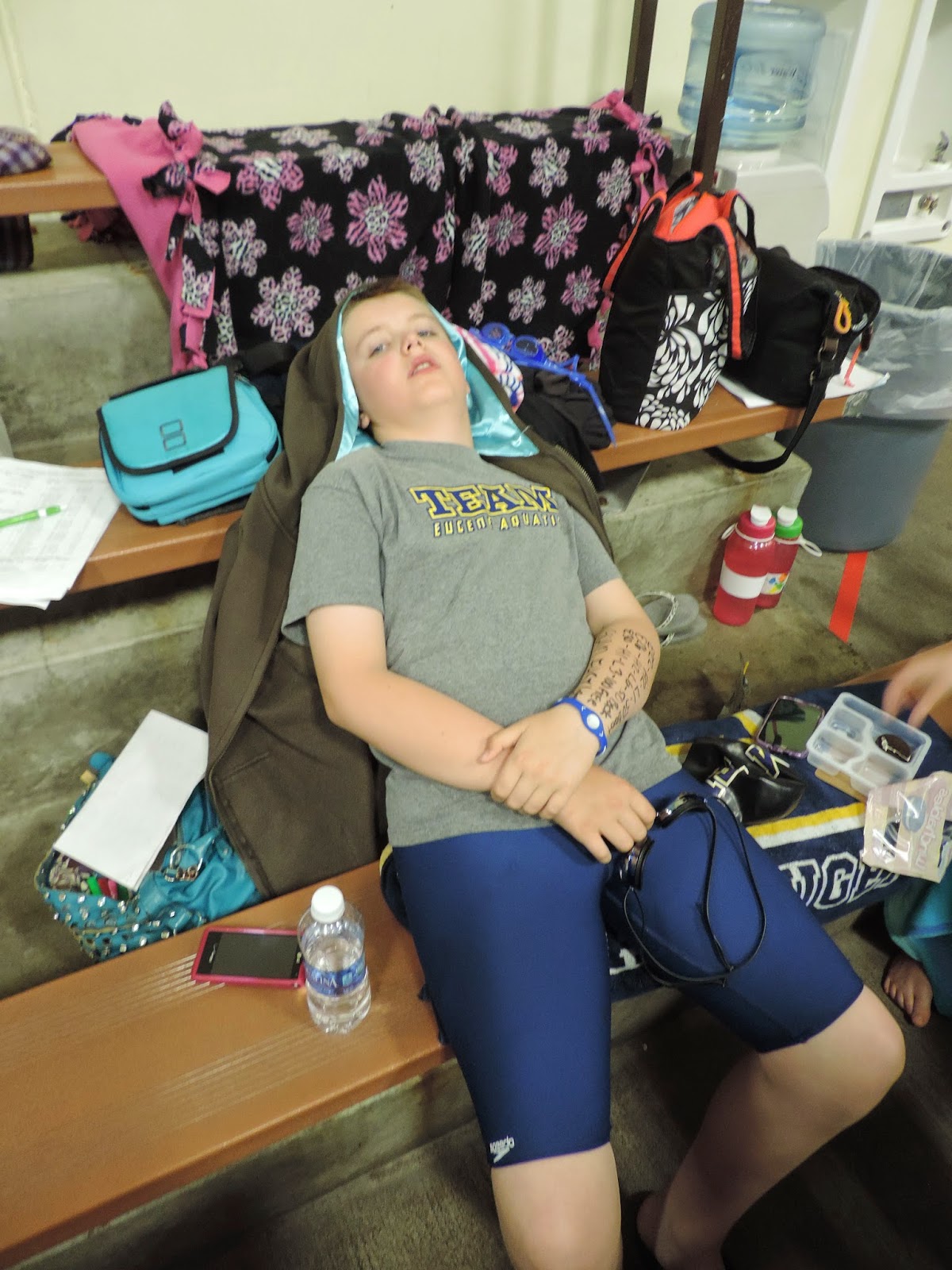 Right after his warm up, he spiked a fever and developed a head ache, body aches and chills. Luckily, I had some ibuprofen with me, and it helped him get through the morning. And guess what? He swam GREAT! He swam some of the best races of his life! He's getting stronger and better at swimming, and all his hard work is finally paying off. One of the doorknobs on the team was super rude to him, and I can't wait until the day Britt beats him. Britt asked him if they were in the same heat, and the kid said, "No, but I'm still going to beat you!" What a jerk. (This is the same kid that told another boy he didn't like the Legos he got him for his birthday.) Anyway, Britt swam really well, beat his times, and that's all that matters. Below, he is with his good friend Alanah - they are such buddies! Sometimes we take her to swim practice. They hung out all morning and cheered each other on. Her grandma, Cathy, said she might embarrass Britt by cheering for him, and he said, "No, you can't embarrass me!" 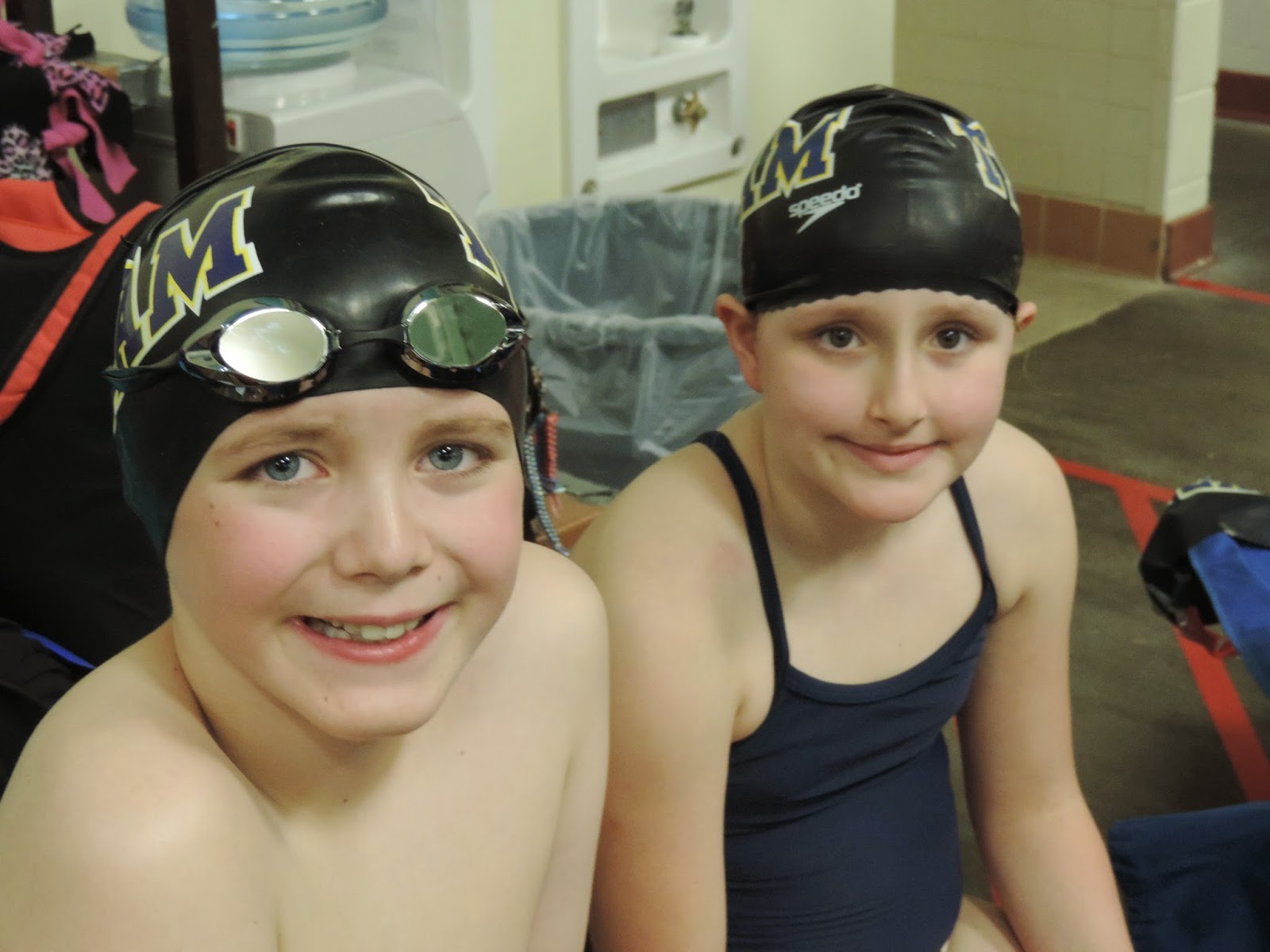 Britt earned two Stroke Improvements and three Best Times from Coach Britta - he had to choose between them for a tag to put on his bag, so he picked two Best Times and one Stroke Improvement (he is holding one in his hand, below). He was really looking forward to the next day of the meet, especially because he wanted to show his coach he could do a better Breaststroke, but after we got home, his fever got worse, so we had to change our plans and stay home so he could get well. Thankfully, after a full day of rest and lots of juice, he was feeling better by Sunday evening, so off to school he went Monday! 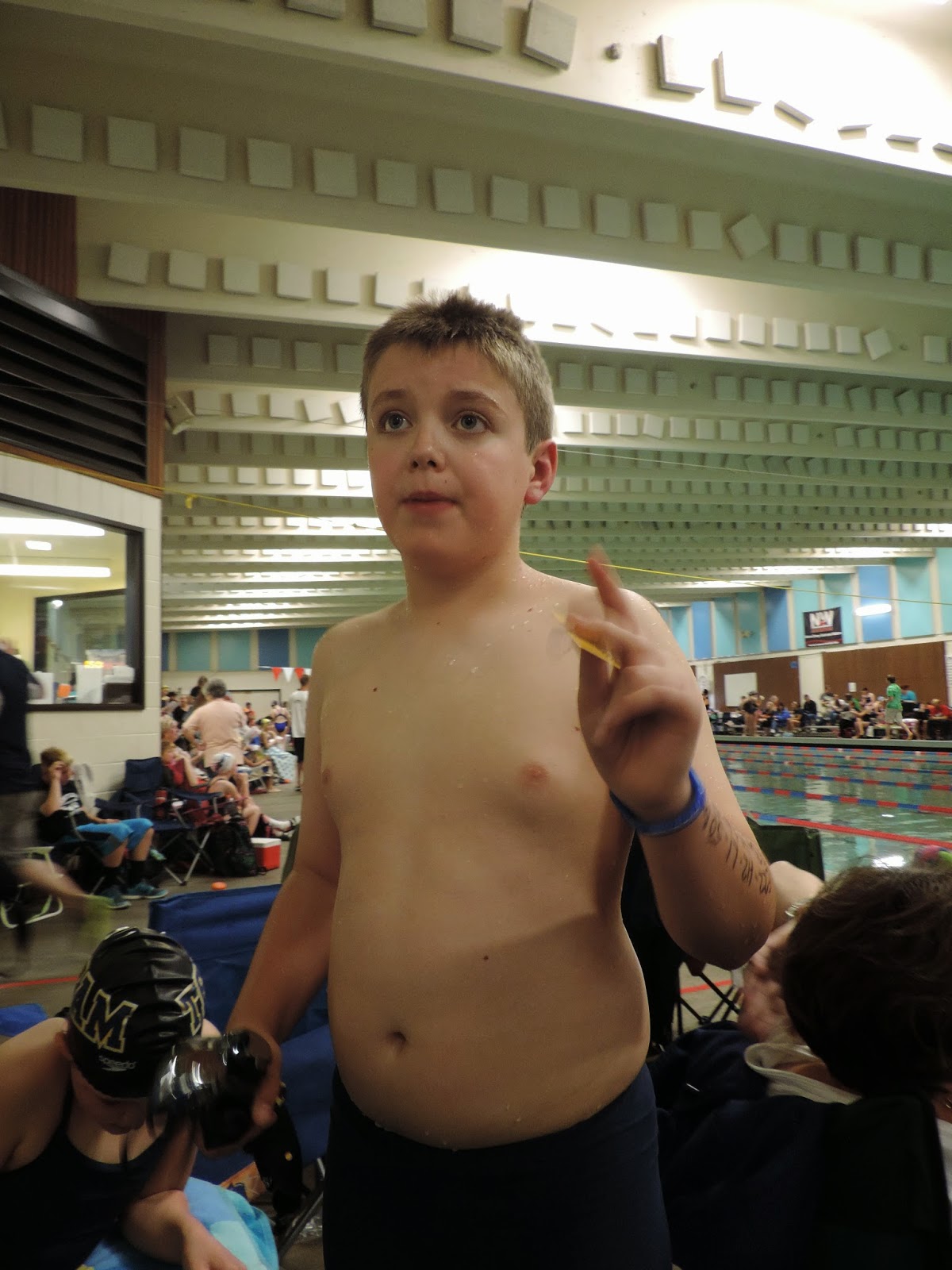 Brailey, for her part, had her plans change a bit, too. She was super nervous for her first barrel racing clinic and didn't think she would enjoy it at all. But guess what? She loved it! Brady was such a good dad and took pictures and videos for me. The above one is from his cell phone, so its a little grainy, but you get the idea. She learned more than she ever dreamed she would, and it is just the tip of the iceberg on her learning curve for barrel racing. Of course everyone loved her horse, and if she sticks with it, they are going to be a great team. The clinic was put on by Lynne and Brenda Mays, and Brady could not have been more impressed! Both of them have made the National Finals Rodeo, and they know what they are talking about when it comes to barrels. I've never heard Brady so excited about barrel racing! And even better, Brenda told Brailey she needs to keep playing volleyball, because she can always ride, her entire life, but she only has her childhood to experience sports at the school level. I've shared that with Brady, myself, but after hearing it from Brenda, he understands, and now he is totally on board for volleyball AND riding! I LOVE IT! 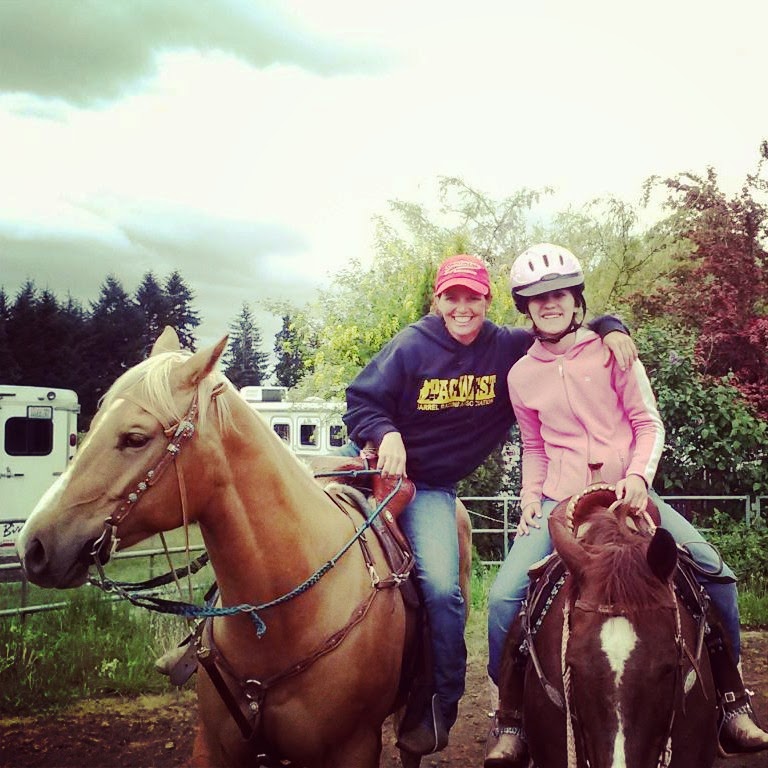 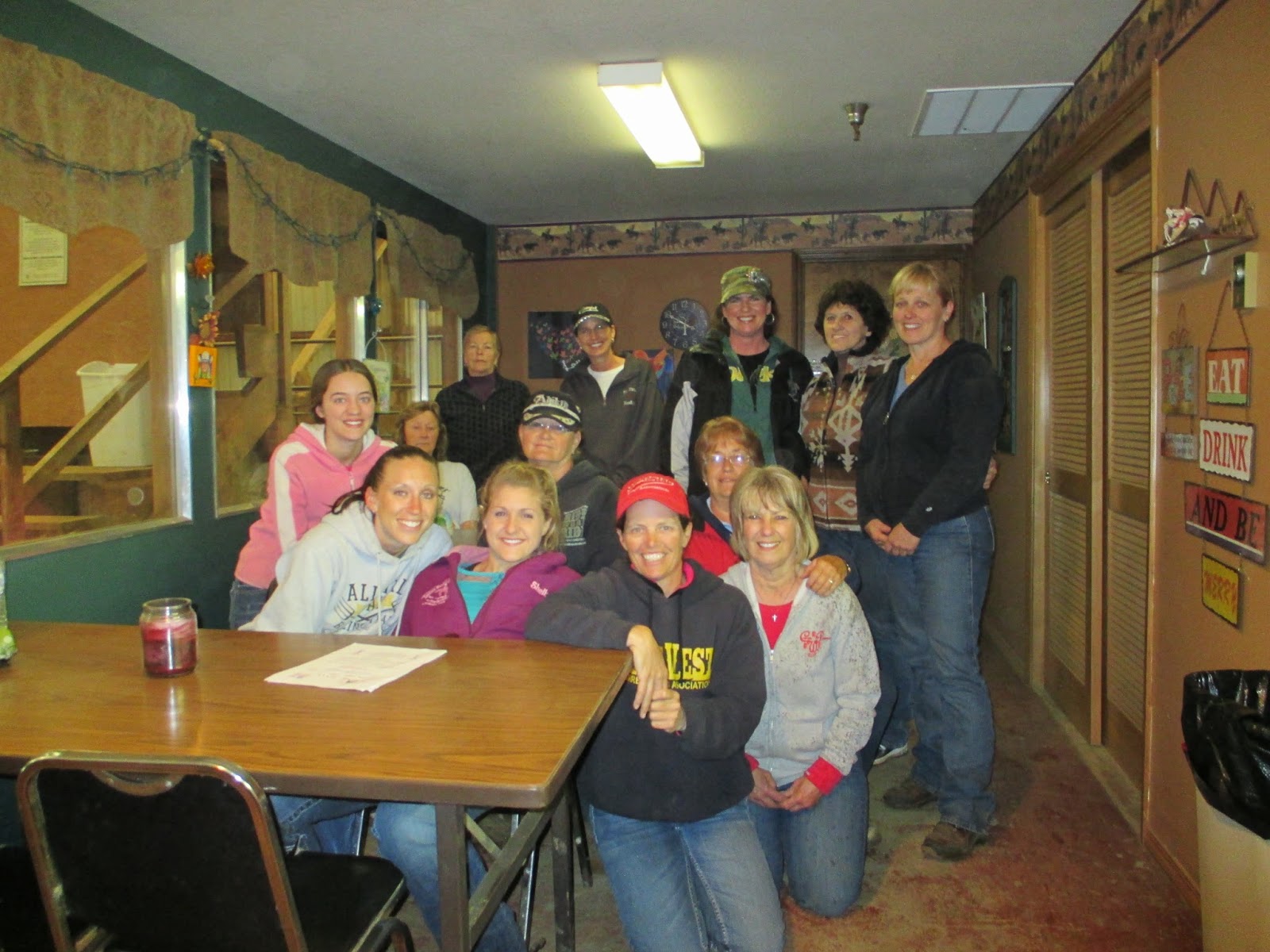 The whole crew! This was everyone at the clinic along with Brenda and Lynne. 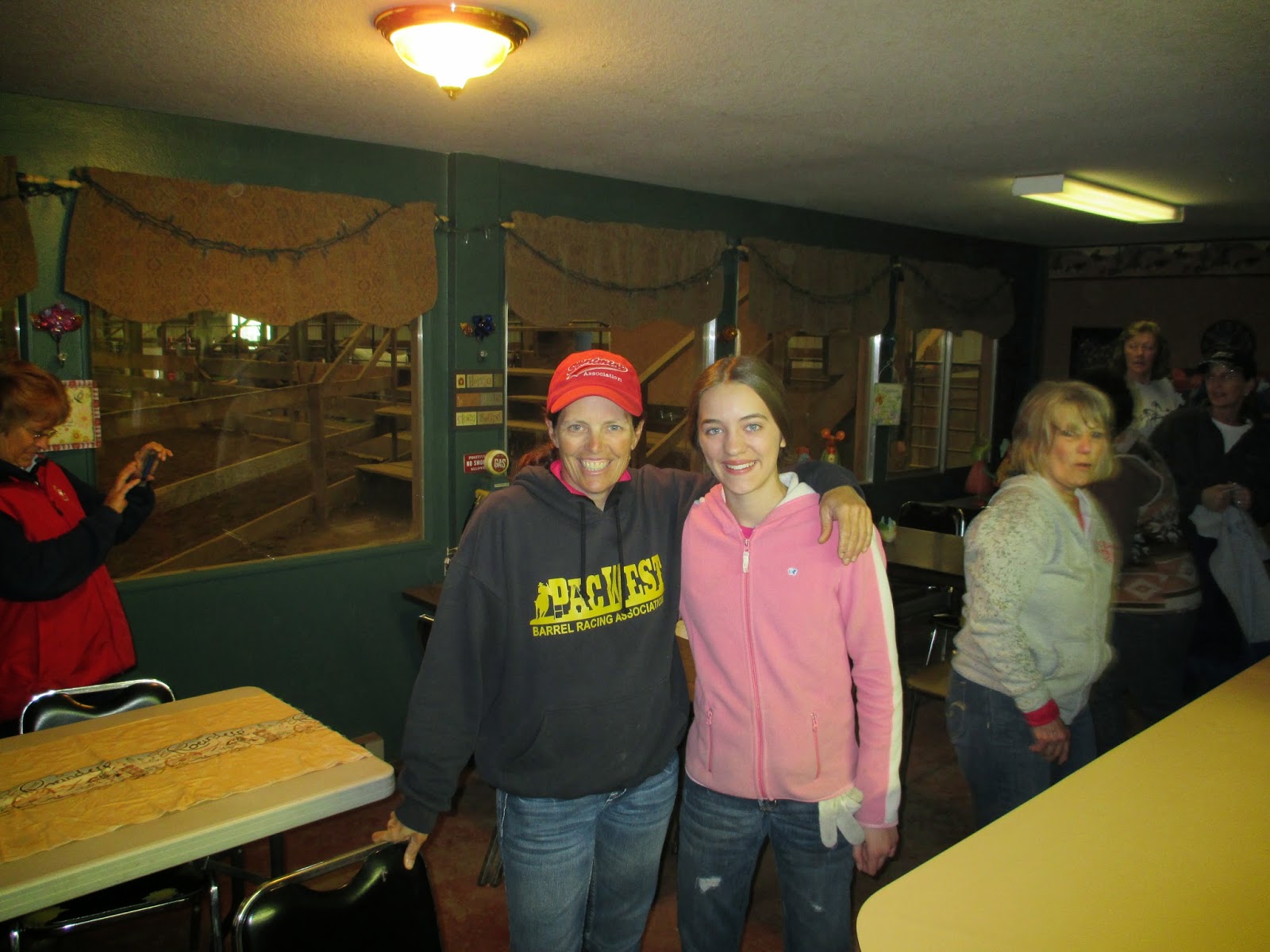 Brailey and Brenda - I can't believe she is as tall Brenda! 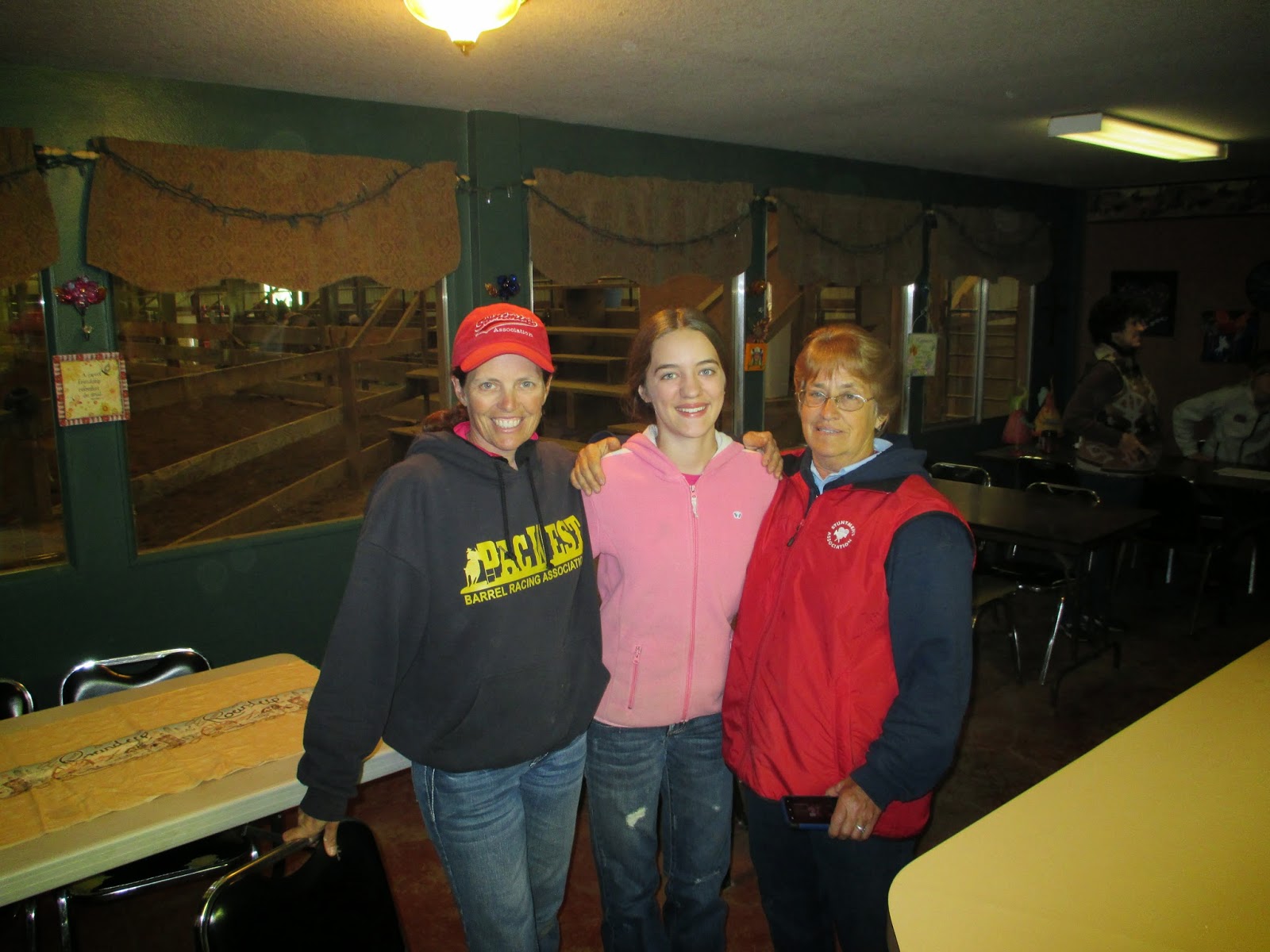 And Brailey with both Brenda and Lynne. Lynne is Brenda's mom, by the way. Brailey said, "Mom, they are so positive!" And I remember from my days of competing that they are, indeed, the epitome of positive. They were always so kind and helpful to me. Always! I used to get super nervous, because I wasn't confident, and I still remember Brenda telling me, "Just have fun! That's what it's all about - having fun!" Words to live by, for sure. And even though things don't always go as planned, sometimes, like in Brailey's case, they go even better. Britt, for his part, is rested and ready for the next meet! Life - it's a good one!
at May 05, 2014