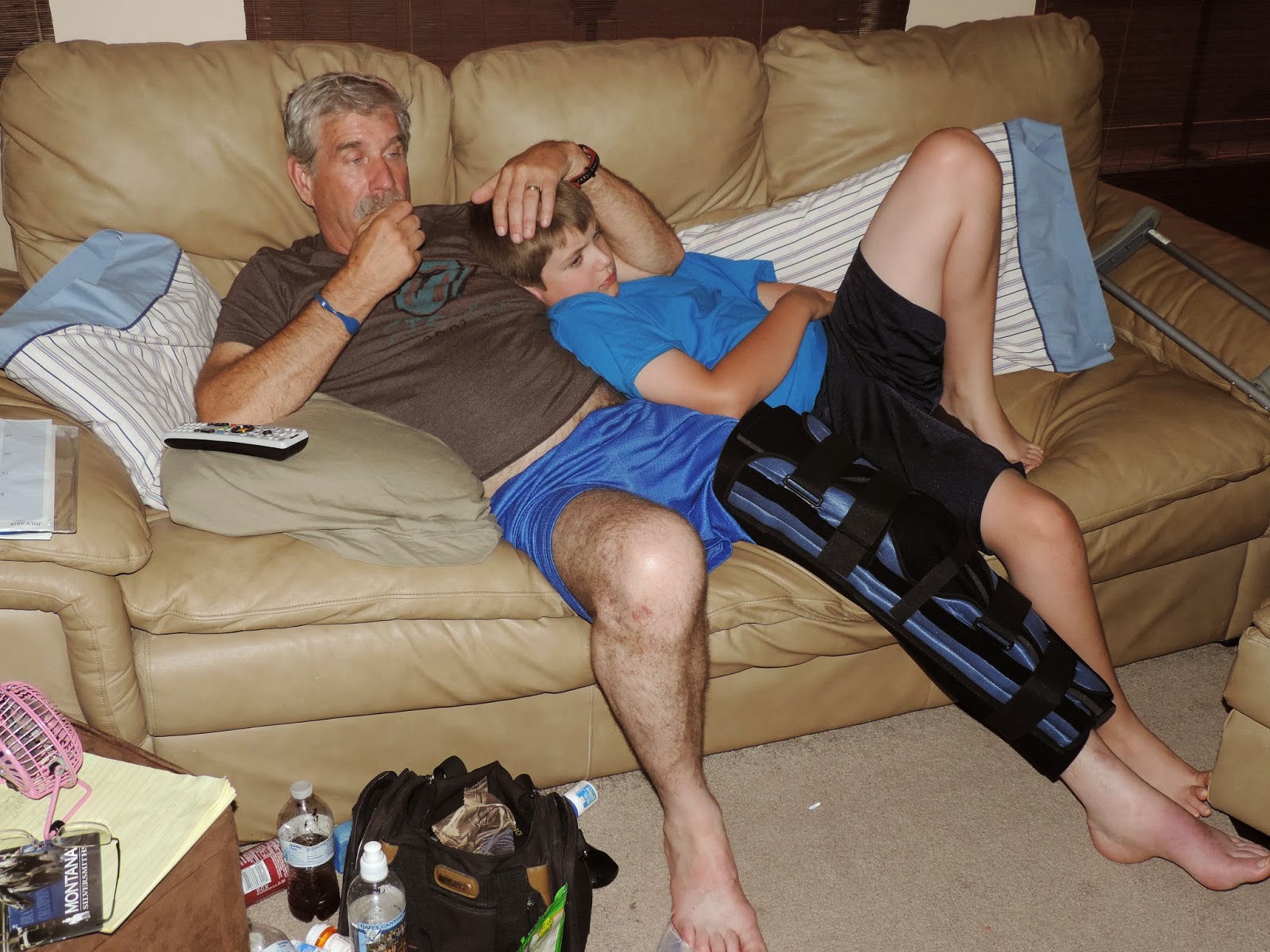 It has been almost two weeks since it happened, "it" being The Great Crash. The Great Crash, if you haven't heard, was when a rodeo queen missed the out gate by about twenty feet on her runaway horse at the start of the bull riding Brady was judging over the 4th of July weekend and ran over him. From what people who witnessed it have told me, we are lucky it wasn't worse. We would love to be depressed and angry, but that's just not the way we roll. (Mostly, we have been "rolling" along in a wheelchair!) Sure, it has put a crink in our summer. Yes, it has caused some worry. Brady was just ready to start roping on his mare that he loves so much, and he was also going to teach Brailey how to rope. His new Christmas product for Montana Silversmiths came out the week before the accident, one of his busiest times of year for selling. We were going to go on a rafting trip. In fact, we had lots and lots of "things" we were going to do. But guess what? We are so grateful and blessed he came out of the wreck with a broken leg and that he is still HERE with us. Granted, it is a bad break - it is a crush break, which is worse than a clean break. Both his tibia and fibula at the knee were crushed into pieces. So far, though, they are all in place and surgery won't be necessary. We will know more as time goes on, but things are looking good! It will take a long time for it to heal, but you just can't keep a good man down, and that goes for mind, body and heart - Brady's fighting spirit will see him through. In fact, that is part of the battle, with him - keeping him down so he can get well! As you will  see from the pictures, he still has things to do and places to go. In the picture above, he and Britt managed to get in a little snuggle time - they just had to be more creative than usual. At the airport, waiting for Brailey to meet us in baggage claim. We hit the jackpot and found a close parking place right next to the wheelchairs! It was perfect. 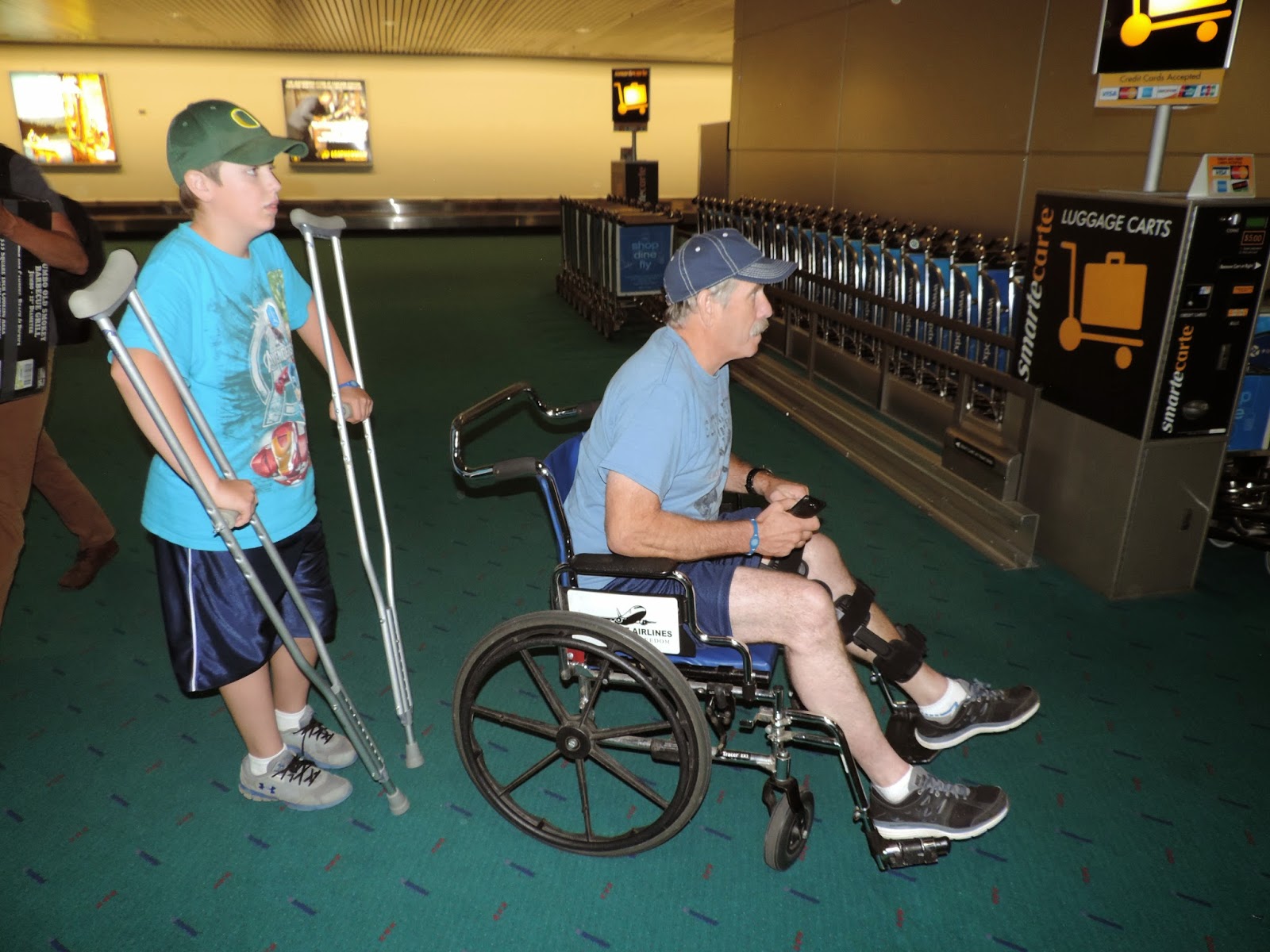 Uncle Frank escorted Brailey all the way there, even though he had to go back through security to catch his second flight. It was so great to see them! 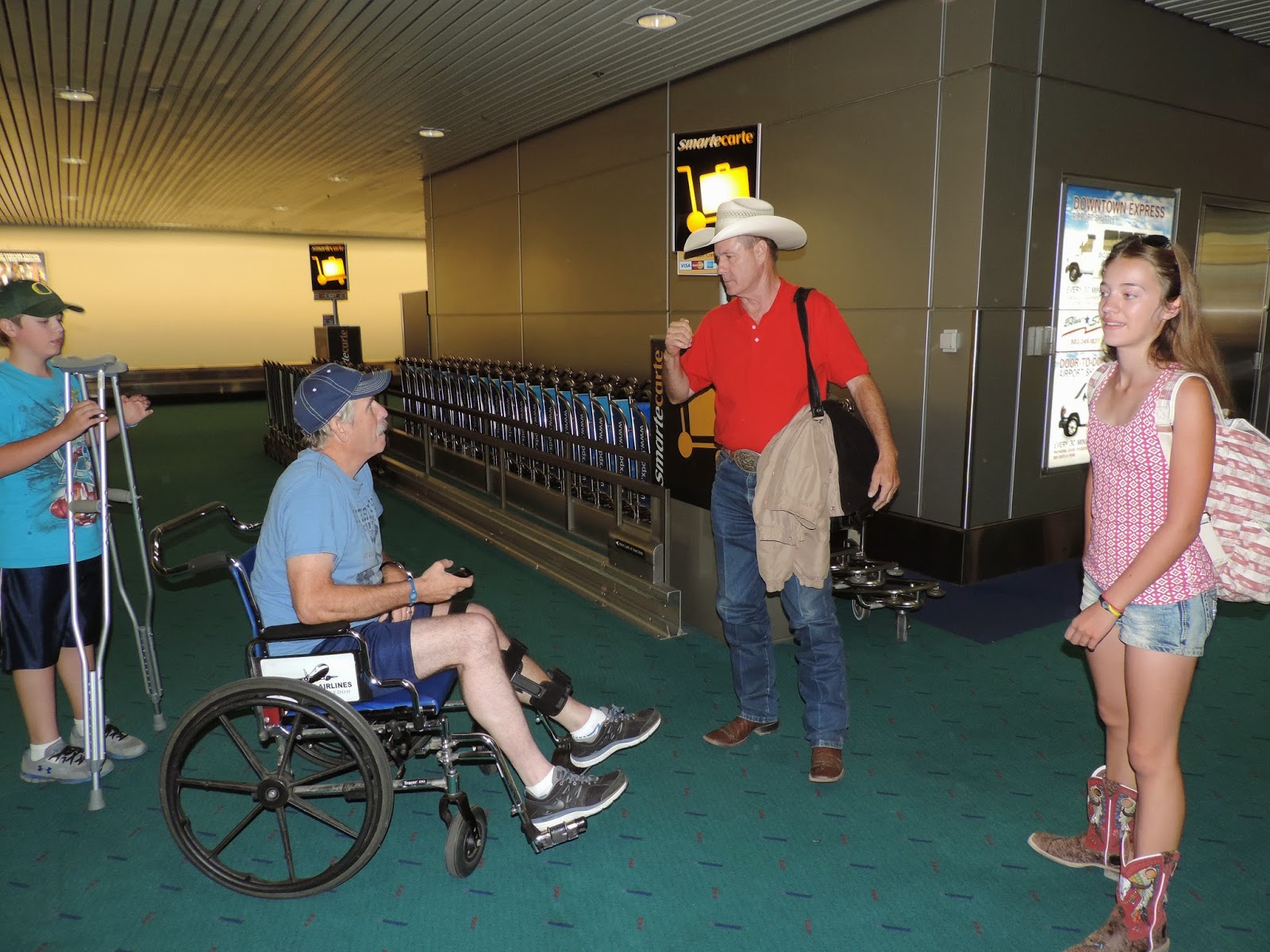 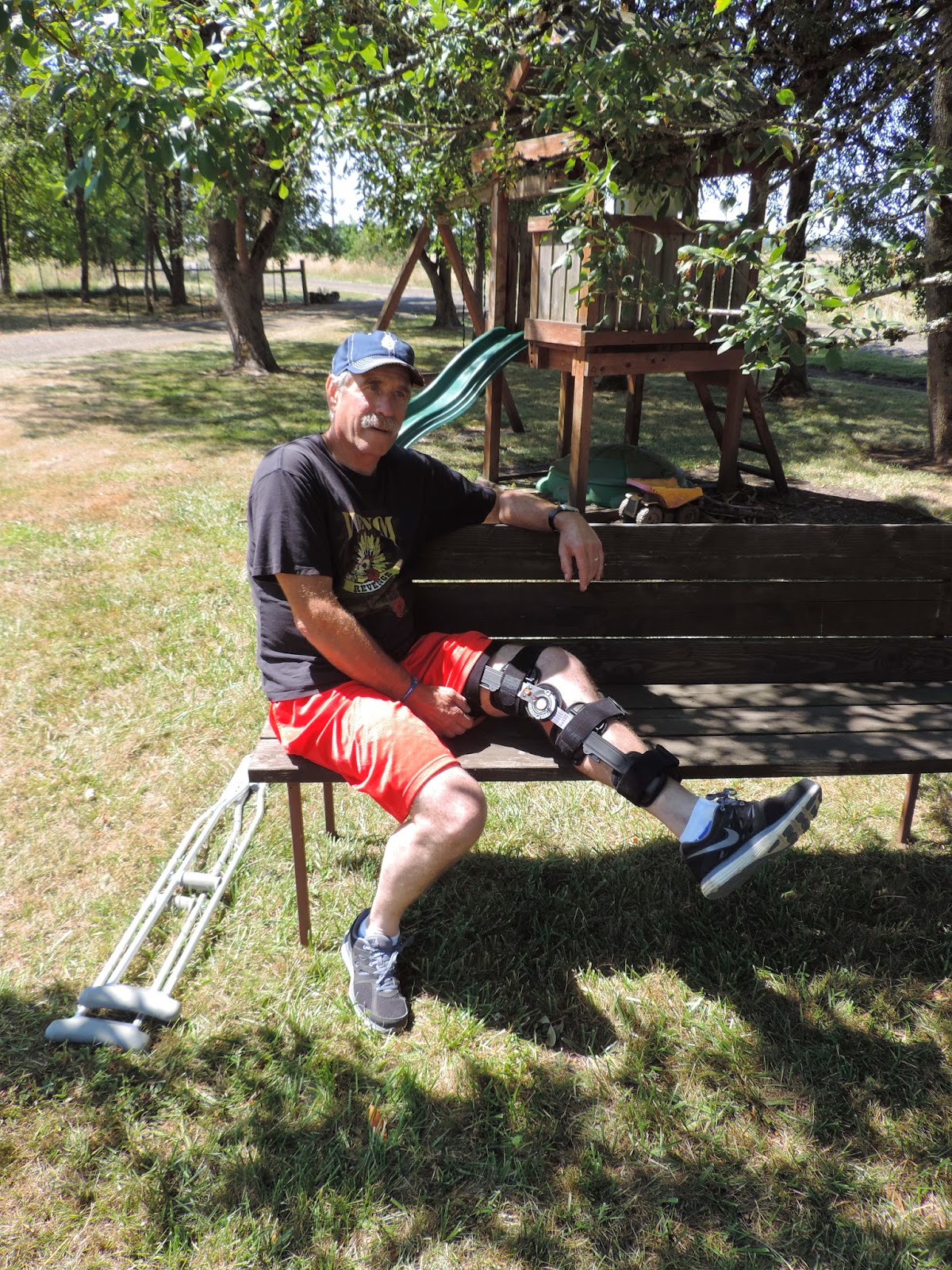 Sitting outside for a bit, watching his B's. 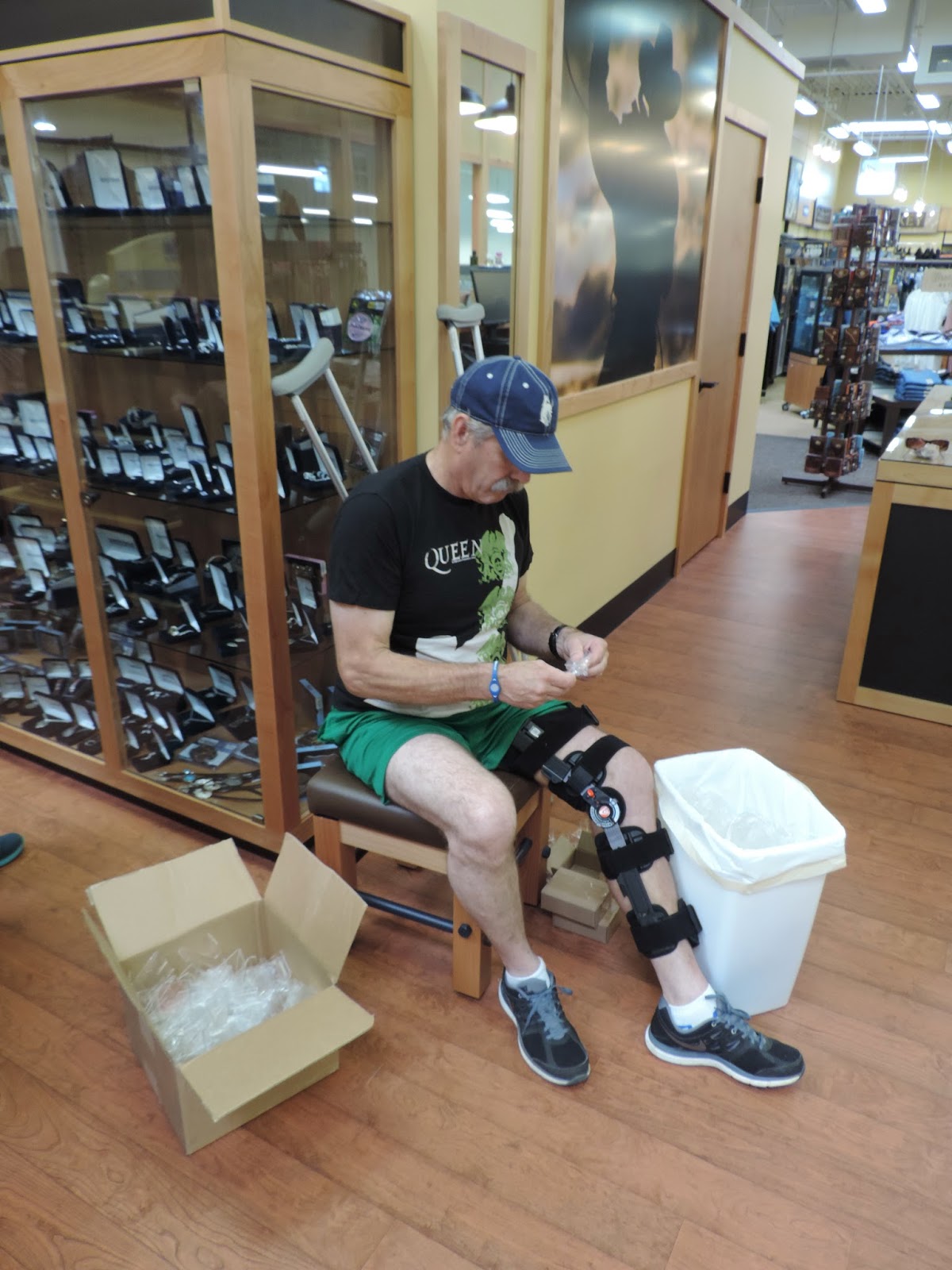 He had a new store open in Corvallis, and had all their pedestals for the new case. I drove him to the store and helped him set everything out. It was all fine and dandy! 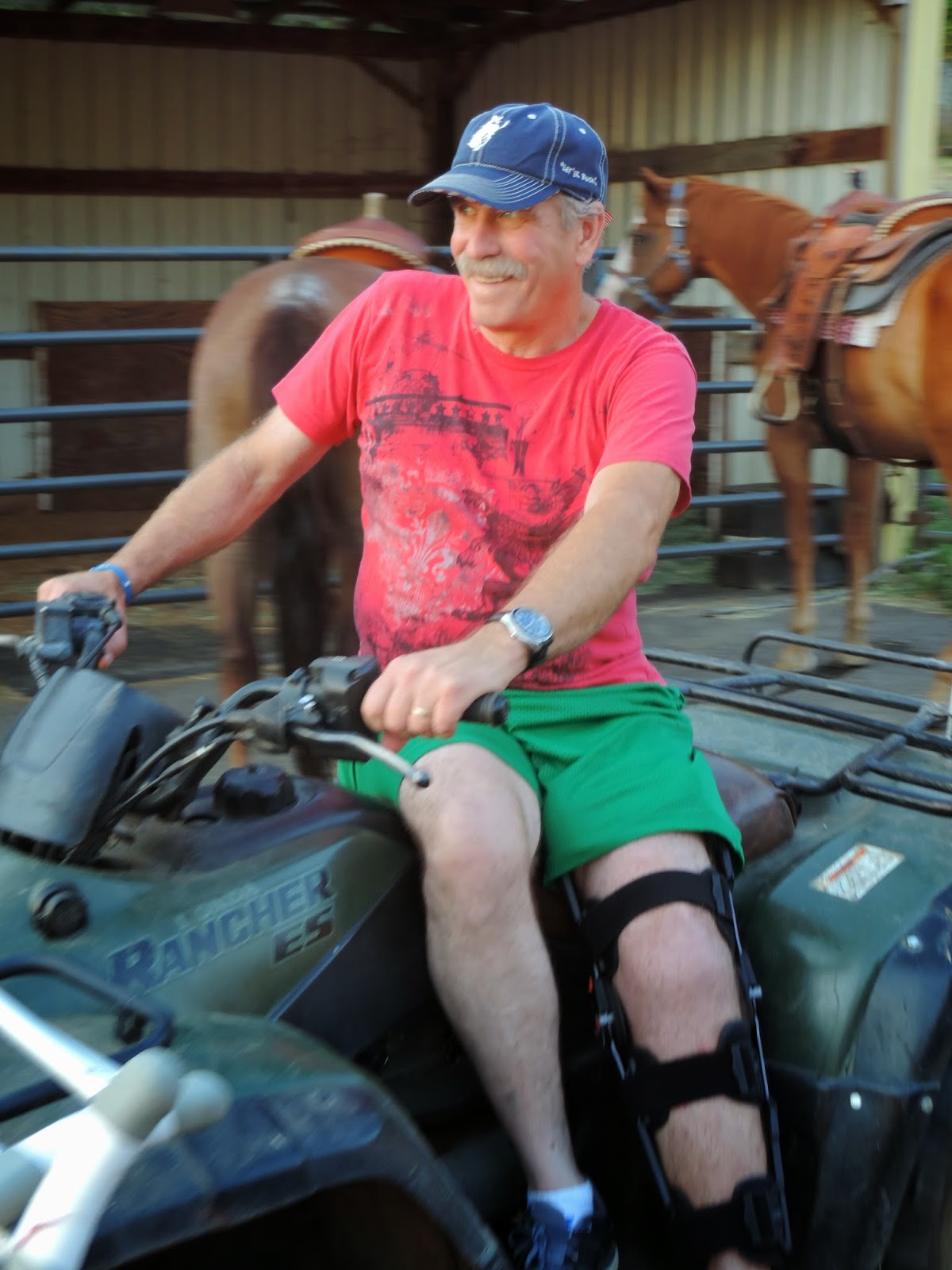 He figured out how to navigate on the 4-wheeler so he could watch us ride our horses one evening. 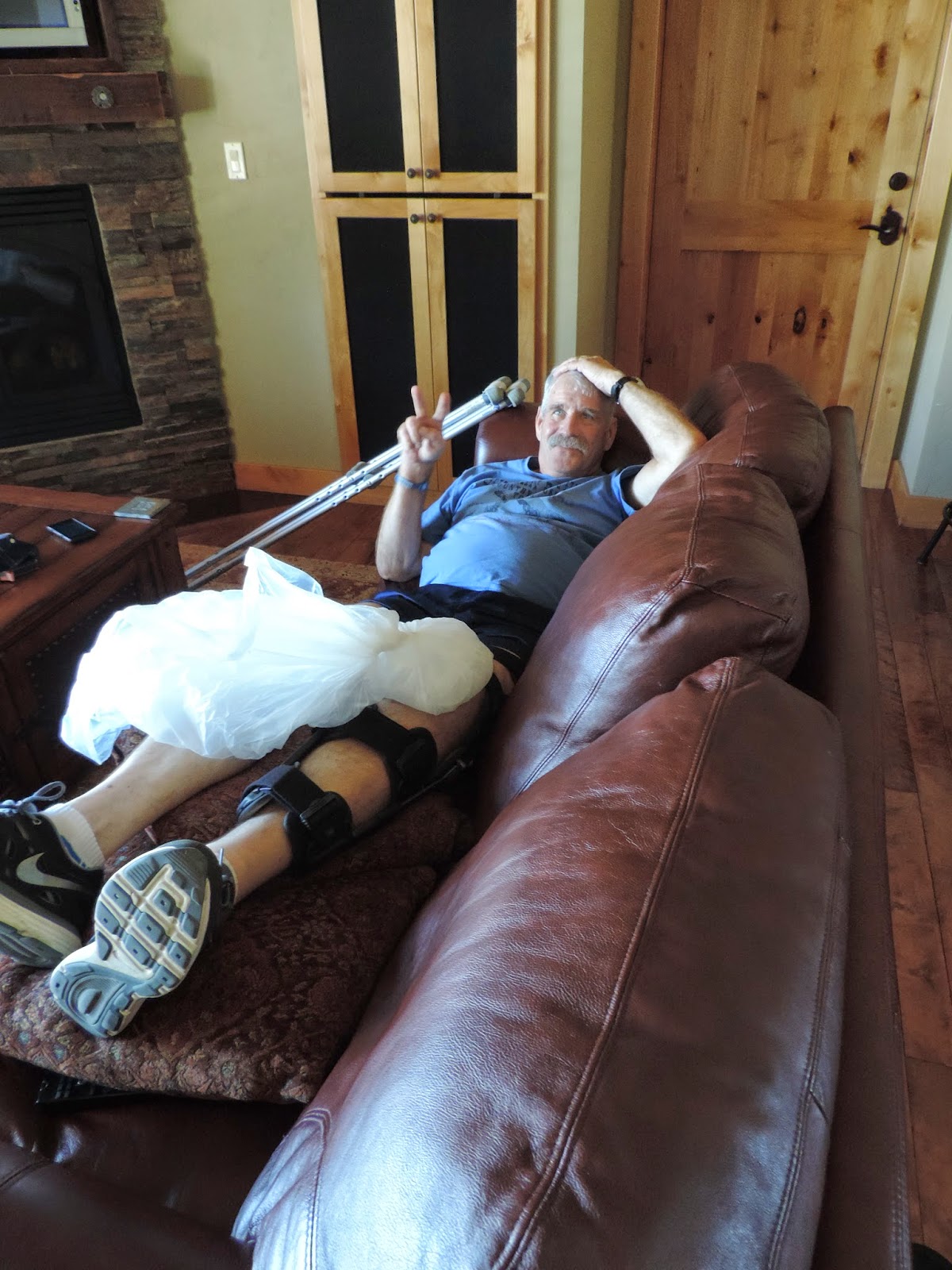 Yesterday, we drove to Redmond to deliver a case to the Big R over there. The day before, Brady supervised the little B's and I as we cleaned it and loaded it into the pickup (we are talking a huge display case that took up the entire bed of our pickup - super heavy!). The crew at Big R helped us unload it and set it up in the store. It was a lot for Brady, but he survived. The best part of the day was seeing Uncle Frank, who was out at the Brasada Ranch for a cutting he is judging there. We met him for lunch, and then went to his cabin for Brady to put his leg up and even managed to get some ice on it. It was so much fun to see Frank! We love him so much, and loved every second of seeing him. 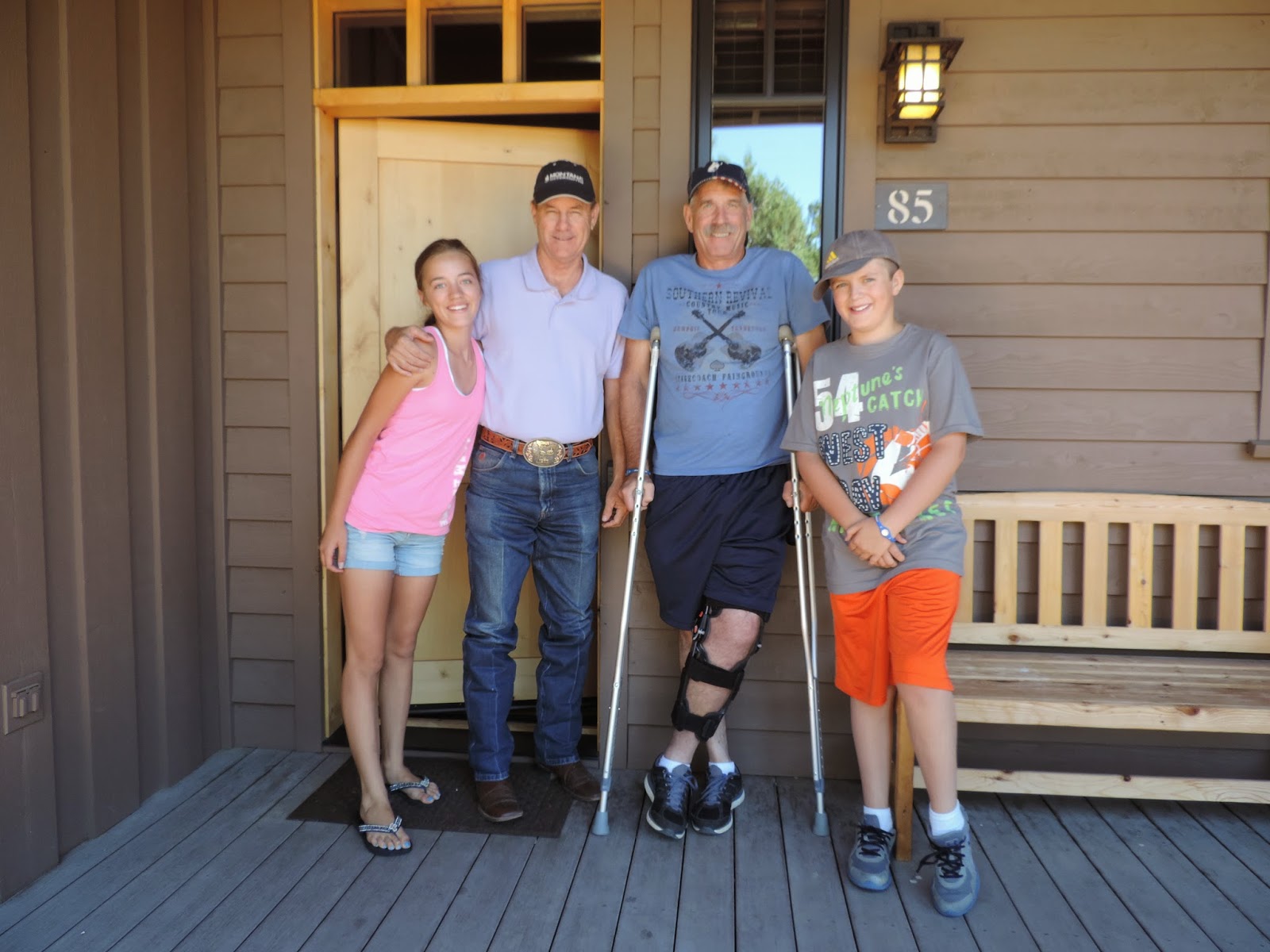 Today? Brady is attending a sales meeting via the internet. He was supposed to be in Las Vegas, but he is participating online, since he isn't allowed to fly. So we improvised! It will be a long, slow road road of recovery, but we are taking it one day at a time. Thank you all for your prayers and offers of help. We are so thankful and send all our prayers and love and hugs right back to you!
at July 18, 2014