Summer of Independence, Lost and Gained

No, I can't believe it is over... Really, I can't! Of course I am always nostalgic about summer. We had an interesting one. It wasn't like one we've ever had before, that's for sure. But like I always say, I've never had a bad summer yet - every summer is a good summer, just some are better than others!

As I reflect on it, as I tend to do every fall, I think the theme of summer for us can be summed up as one of independence, both lost and gained.

Brady, for his part, lost independence. His broken leg took that away from him. There is nothing like a broken leg to make you appreciate all the things you can do and don't always want to. Before you know it, you are dying to do even the most menial task. Life is ironic that way, isn't it? Two days before his accident, he won the bronze medal for his age group in the Pendleton Let 'er Buck 5K. He said that was it, he was retiring from races, not knowing that this would become a hard fact of life. But Brady is blessed with good kids and me, his "wonderful" wife, and we all stepped up and helped him with everything he needed to do. Thanks to my beloved mother, who came over to stay with the little B's to help them hold the place together while we were gone, I was able to drive Brady for a week. The next week, he was able to drive himself and Brailey went with him, and then the week after that, Britt was his copilot. By then, he was able to get around by himself and do what he needed to do on his own, and thankfully, all of his buyers have been incredibly understanding and kind to him. He survived losing a bit of independence, but he also gained some. He gained independence from pain pills, which was a real worry to all of us, but guess what? He is free of them! And that is a huge victory for our entire family, and something you just don't see or hear about every day. Thank you God!

Brailey gained independence more than anyone in our family. She started the summer off by going to Texas for three weeks with Brady's mom, and she had the time of her life! She is still talking about things that happened while she was down there. In fact, she is ready to move! She found us a place to buy and everything, right next to Aunt Cindy and Uncle Frank! She even designed a room for herself in Aunt Cindy's house - had it practically decorated in her head... Brady and I no longer wonder where she will end up - she is Texas bound, no doubt about it! We are so happy she made lasting family connections and that she had such a wonderful time. It was hard for me and Britt while she was gone, and then it was still hard when she came back, because guess what? Brailey is growing up, FAST, and she just doesn't need us like she used to.

So for Britt, independence was gained, as well, but not in the same, positive light that Brailey experienced. While she was growing up, he was waiting for his best friend and playmate to come home, and when she did, she just wasn't the same. She doesn't want to "play," anymore, and after ten years of having her play with him, it has been a tough transition. But that is life, and Britt has dealt with it as best he could. Neither he nor I saw this coming - I thought they would be best friends forever and always hang out with each other, and they do still hang out, just in different ways, and not as much as before. Brailey needs a bit of space, now, and so Britt has had to learn how to be on his own. But thanks to this change, he found a super cool fort up on our hill, naturally made by bushes and branches, and he spent hours up there playing by himself. He is learning how to be okay on his own. Tough transition, for sure, but all part of life.

Me? I lost some independence and gained it, too. Gained it from my darling Shaye-Shaye, because just like Britt, I had to realize she is growing up and she doesn't need me as much as she used to. She needs her "time to herself." And she is so wise beyond her years! I wish I could have been as confident and amazing as she is when I was her age - instead, I was the epitome of insecure. But let me tell you, when your daughter grows up and moves on, IT AIN'T EASY! In fact, it is downright SCARY. But fear creates walls, and so I am trying to learn how to let go without letting go, if you know what I mean? I gained independence, too, from our hectic schedules and the norms of summer. Guess what? I was so busy being a "nurse," our lawn furniture never even made it out of storage. True story! I was busy taking care of other matters, like my husband and his broken leg. My flower beds didn't get mulched. Our planters didn't get filled with plants. Yes, Brady's accident took our summer in an entirely different direction than we had planned... So I lost a bit of independence from doing what I wanted and had planned on doing.

We were just ready to hit the trail, learning how to run barrels and rope and to have some fun with our horses! Brady was so excited to rope on his mare that he loves so much. I was excited to start roping on Alvin, again, and to watch the kids learn how to rope. I couldn't wait to take Brailey to some barrel races. Somehow, it just didn't happen. The accident took the wind right out of our sails.

No, it wasn't the summer we had planned, at all. Still, we got to spend a lot of time together that we wouldn't have, otherwise. And we were reminded to be grateful for our lives, because we are so lucky! We went to some beautiful weddings and watched our favorite movie, Dumb and Dumber, a hundred times. We were together, and it felt so good to be independent from obligations and events and schedules. It was actually what some might consider a pretty low-key summer, and it felt good. Yes, it was definitely the summer of independence. Independence, lost and gained. 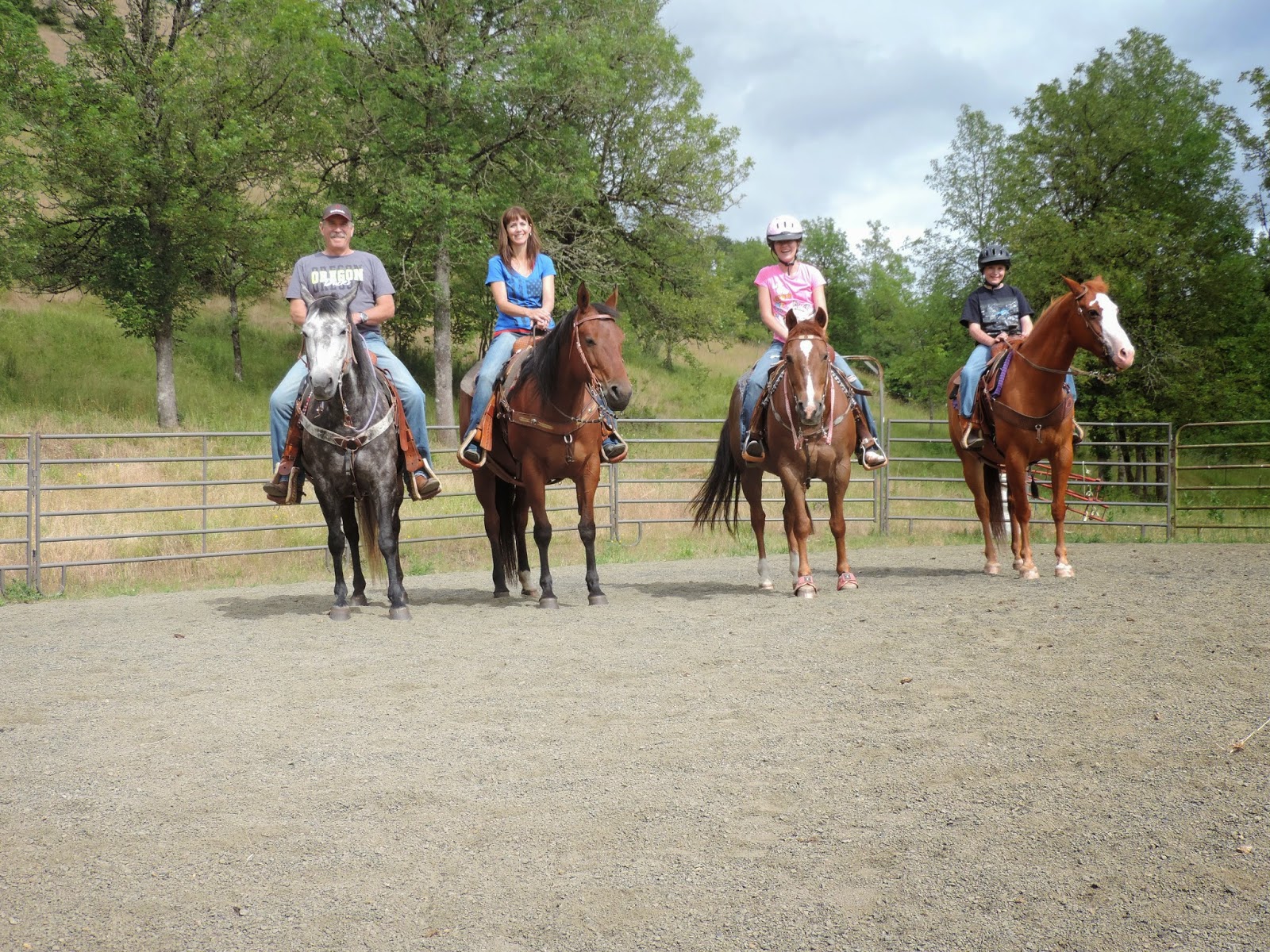 We took this picture in June, right before Brailey left for Texas and before Brady broke his leg.
at September 04, 2014