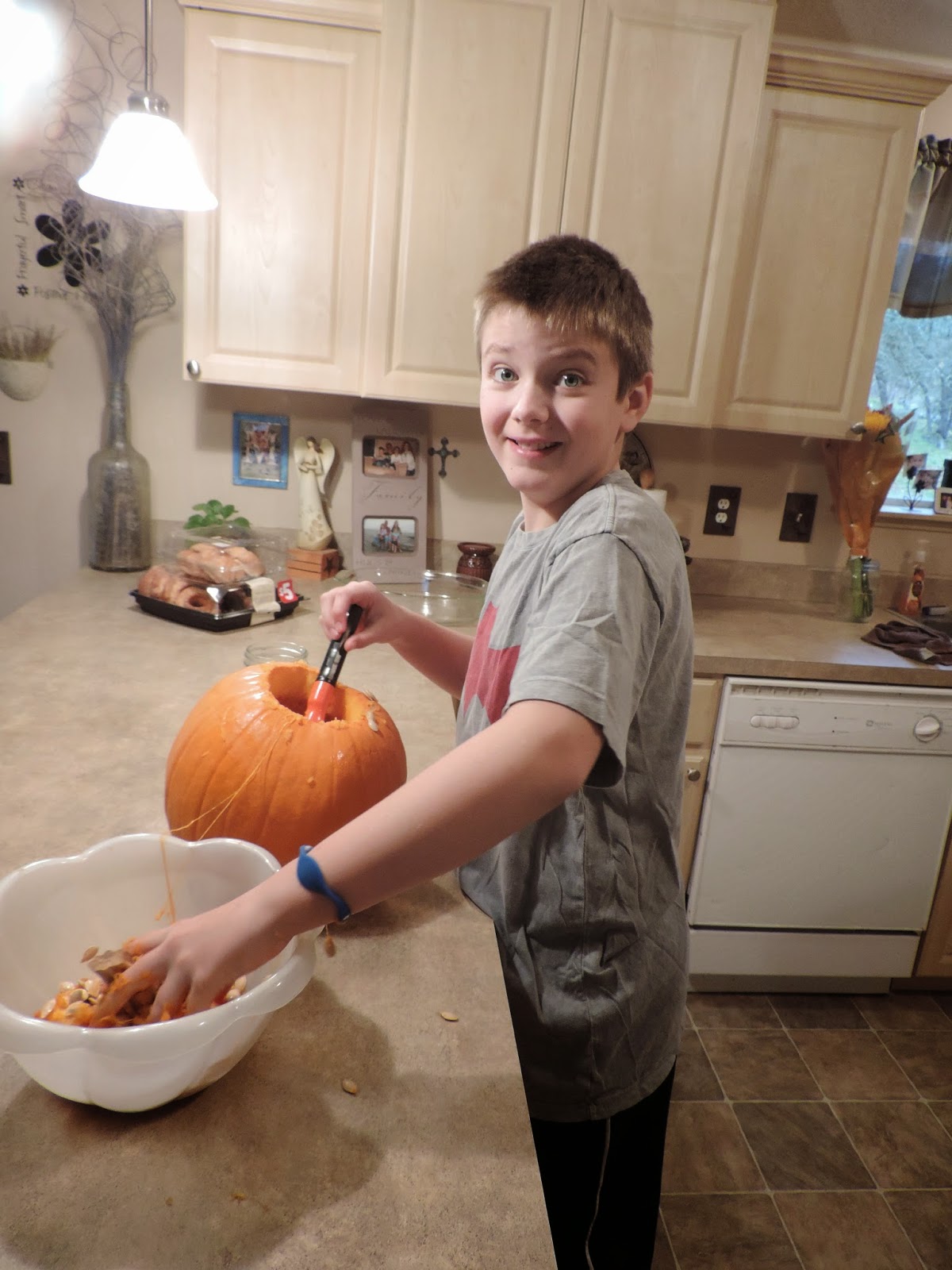 For the first time in five years, we were blessed to have Thanksgiving with my parents, and it was a wonderful, fun, special weekend that we will never forget! We stopped Hustle and  Bustle in its tracks and everyone took the time to "smell the roses," or as Brady and I like to say, we made time to make memories that will last a lifetime. The weather even cooperated - we had planned to get a few things done, but it was too nasty to do them, so we just had to relax. What a blessing! Even the roads were good for Grandma and Papa on the drive over and back. Perfection! Everyone had a part in the festivities. Above, Britt is carving the inside of our last pumpkin out for our centerpiece. Below, Brailey found a flower in the celery, which she then stuck in the freezer, because she loved it so much. She also made the placecards below and Britt searched high and low for the perfect sticks to add to the table decor. Brailey was in heaven helping Grandma cook all morning long. I helped a little, but there is not a better cook in the world than my mother, and once again, she set before us a delicious feast we enjoyed for days! 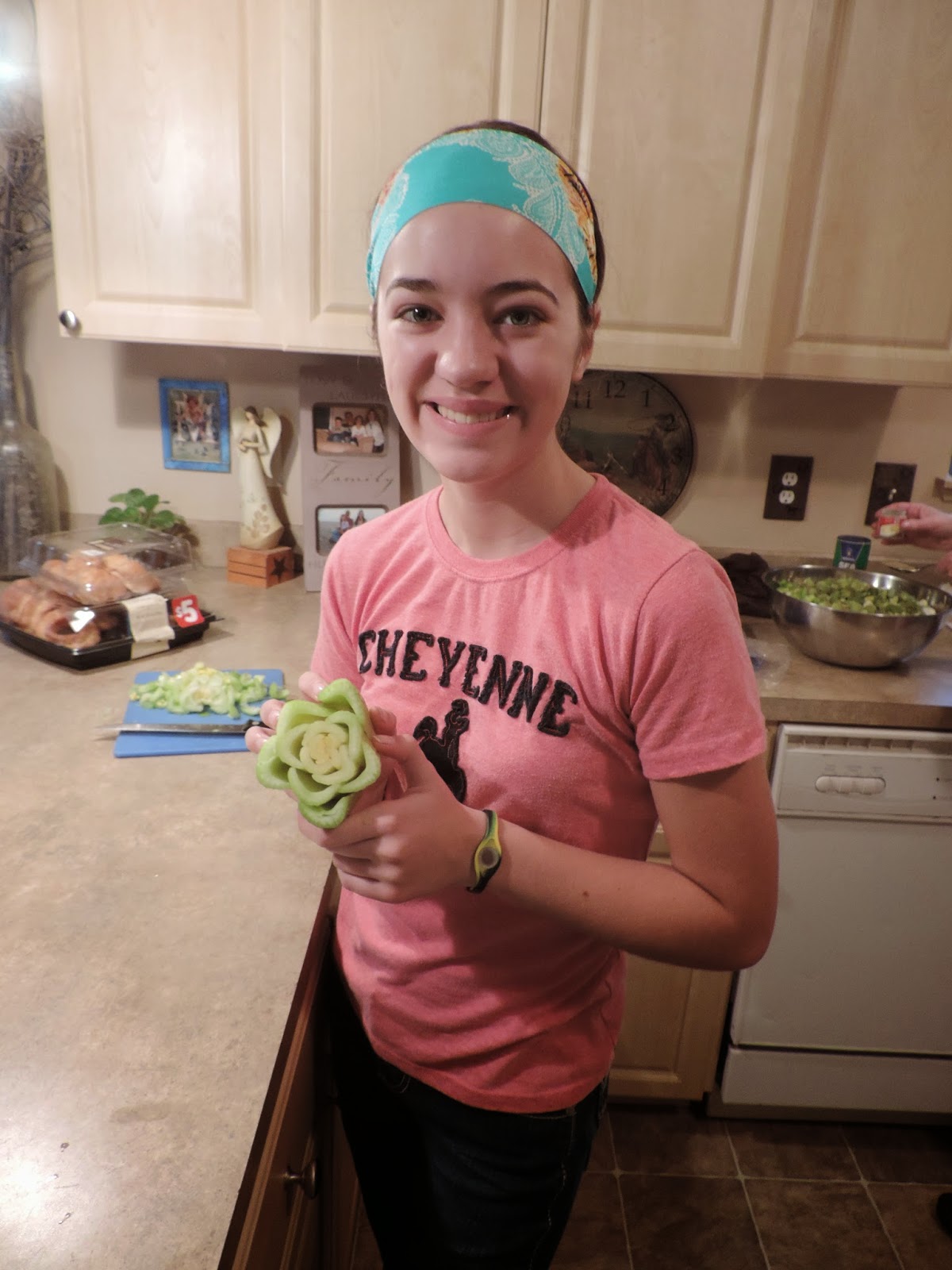 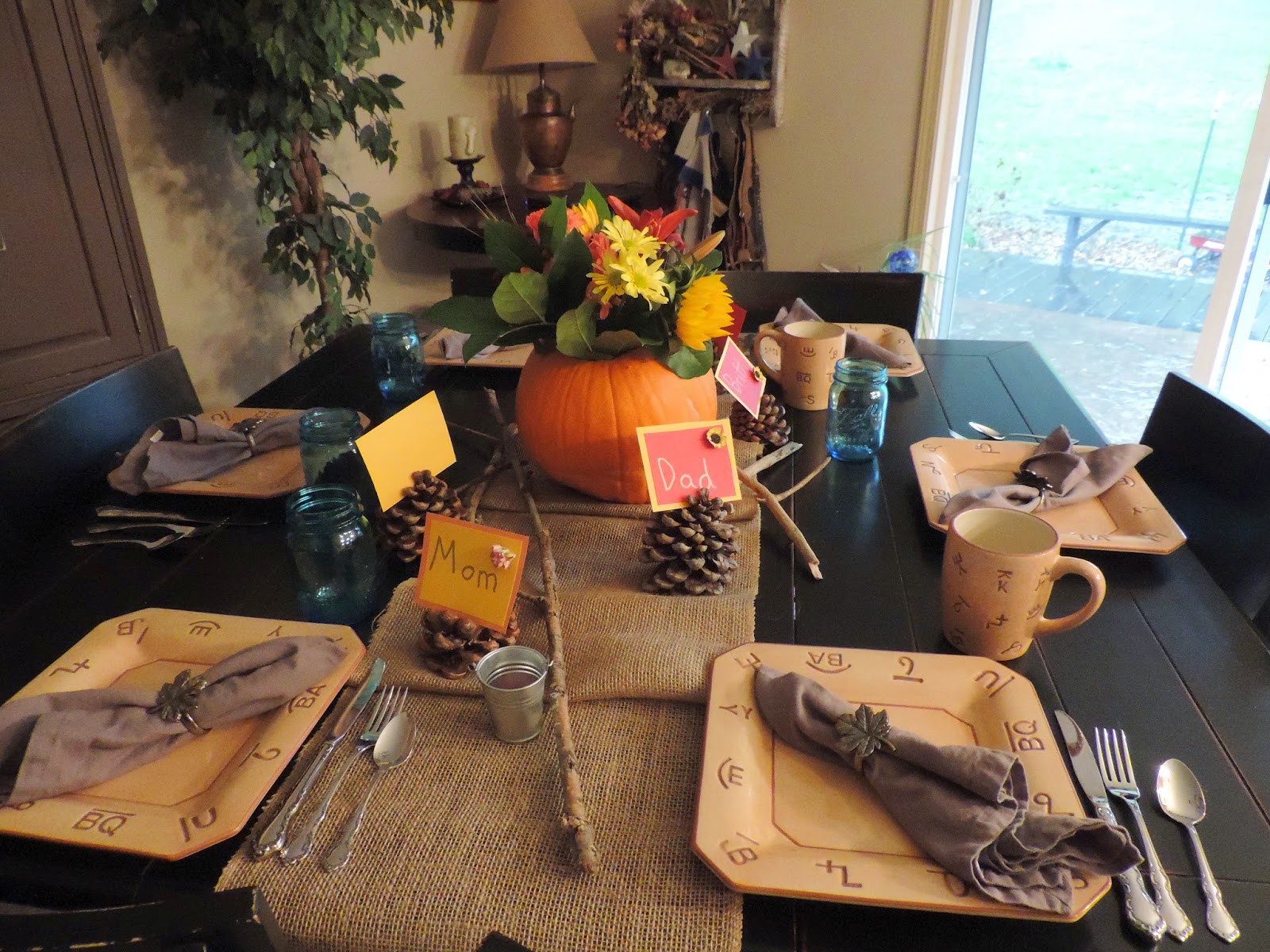 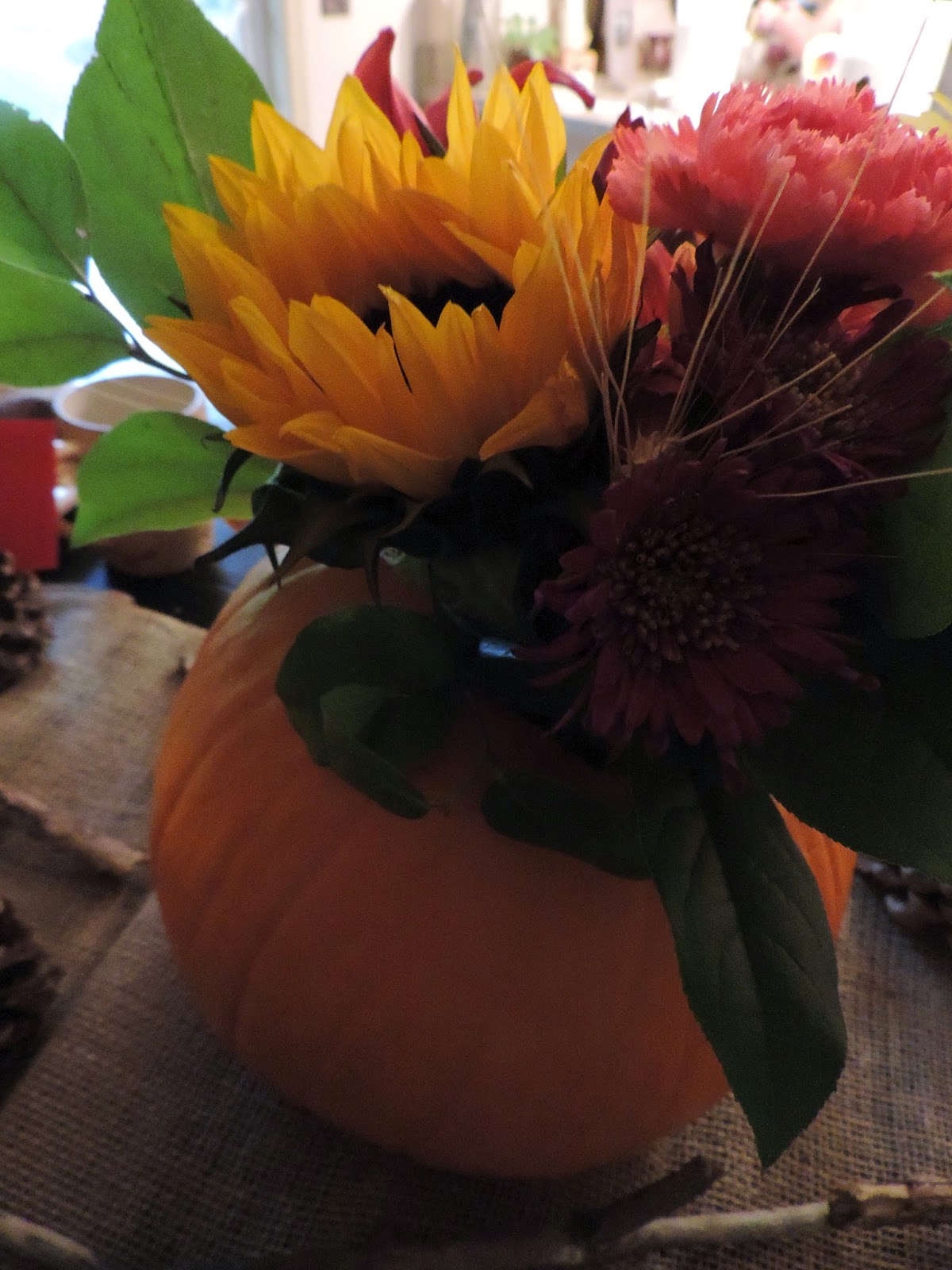 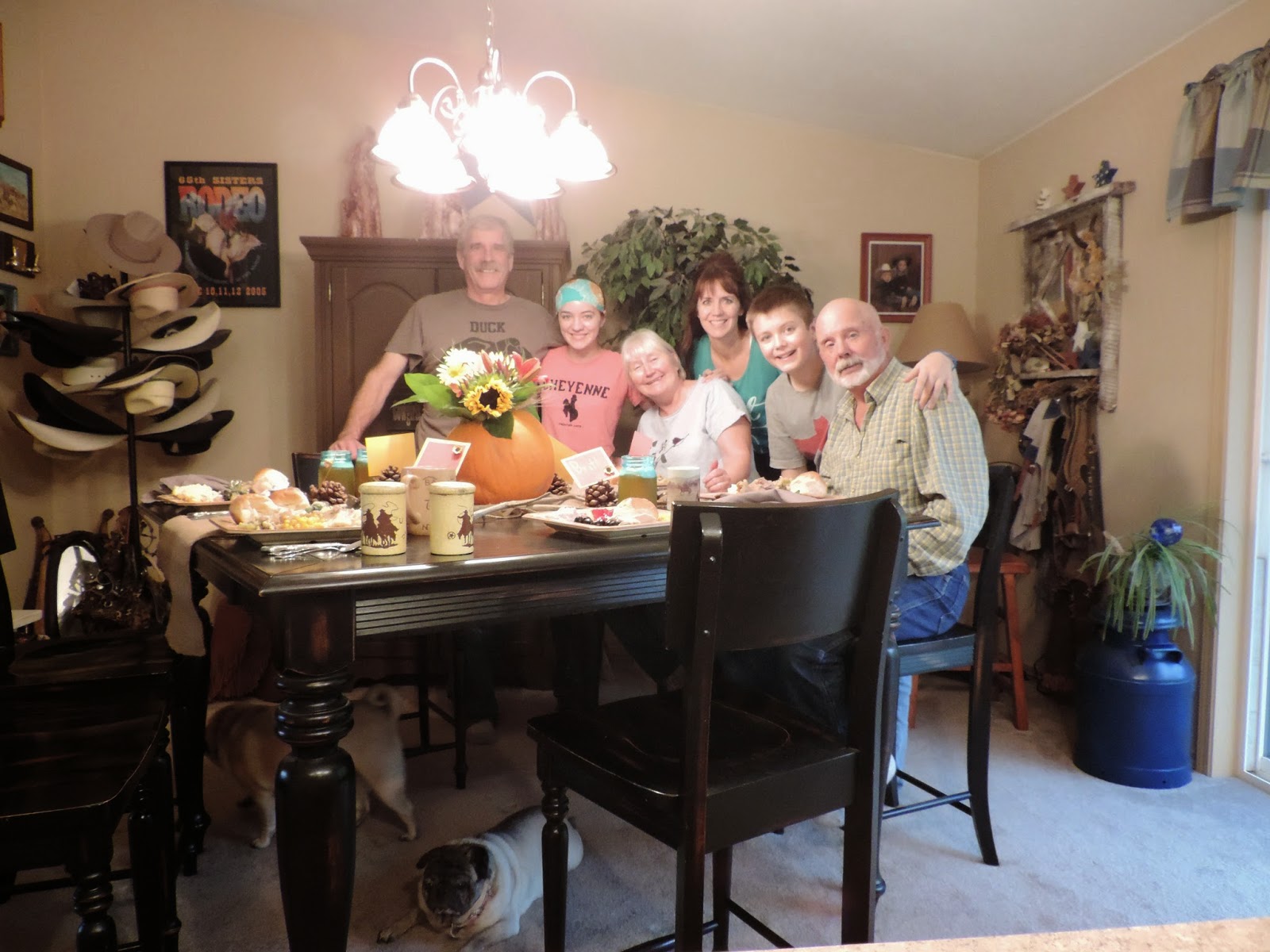 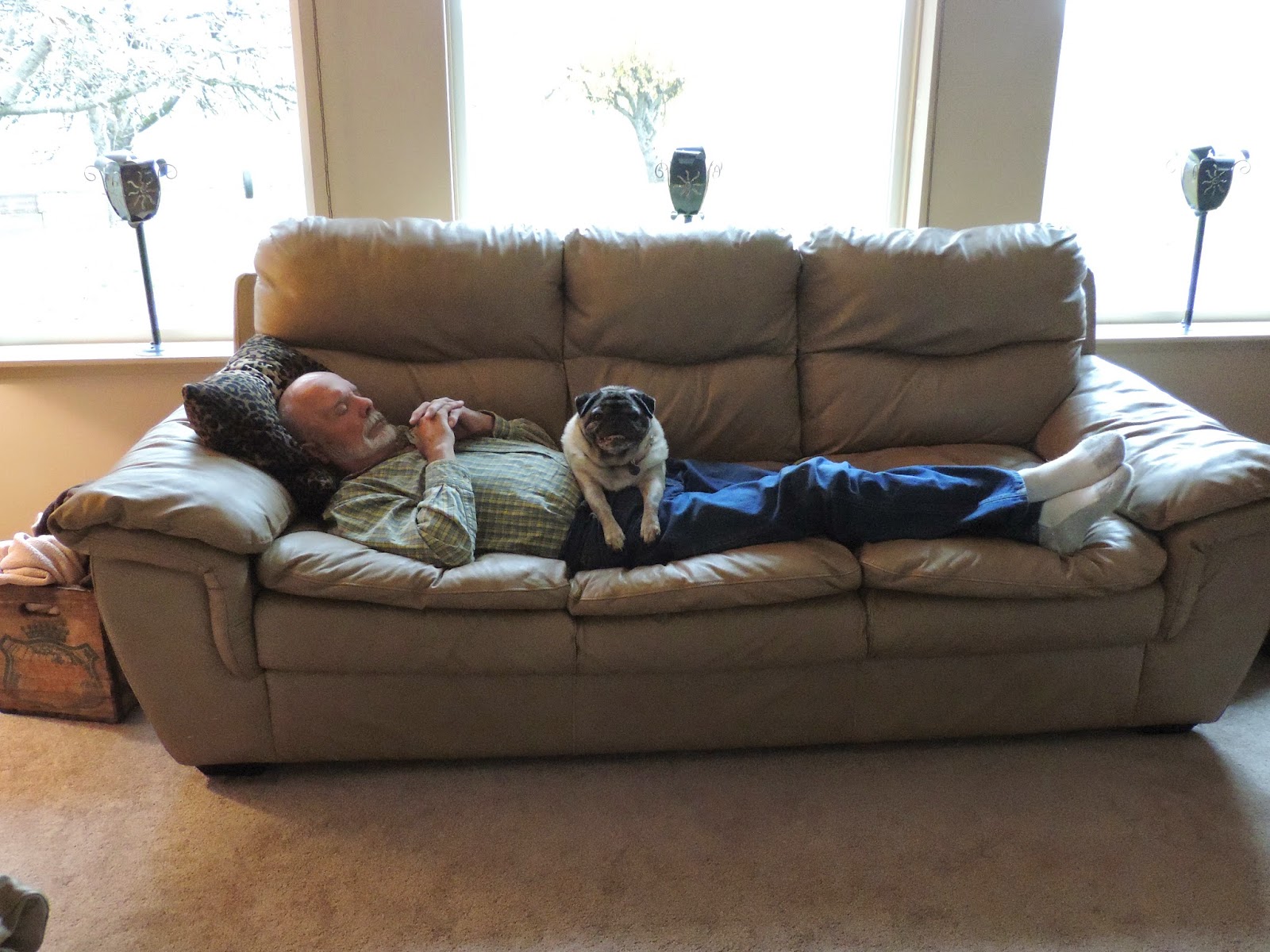 Papa enjoyed an after-dinner siesta with our pug, Rosin, who loves Papa as much as she loves anyone. Grandma's pug, Bucky, had his own siesta a while later. The two pugs are always happy to see each other and are still the cutest dogs around! 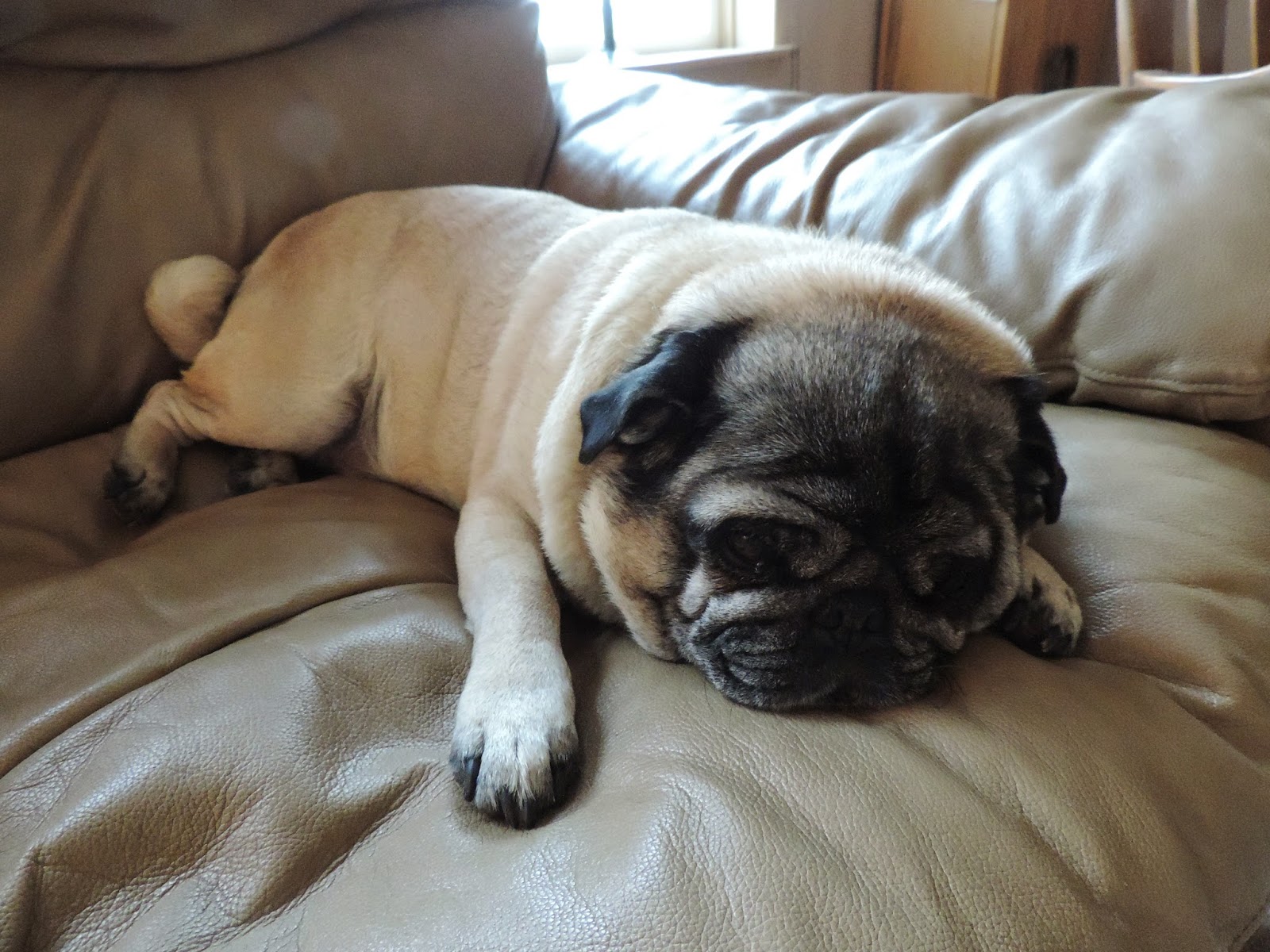 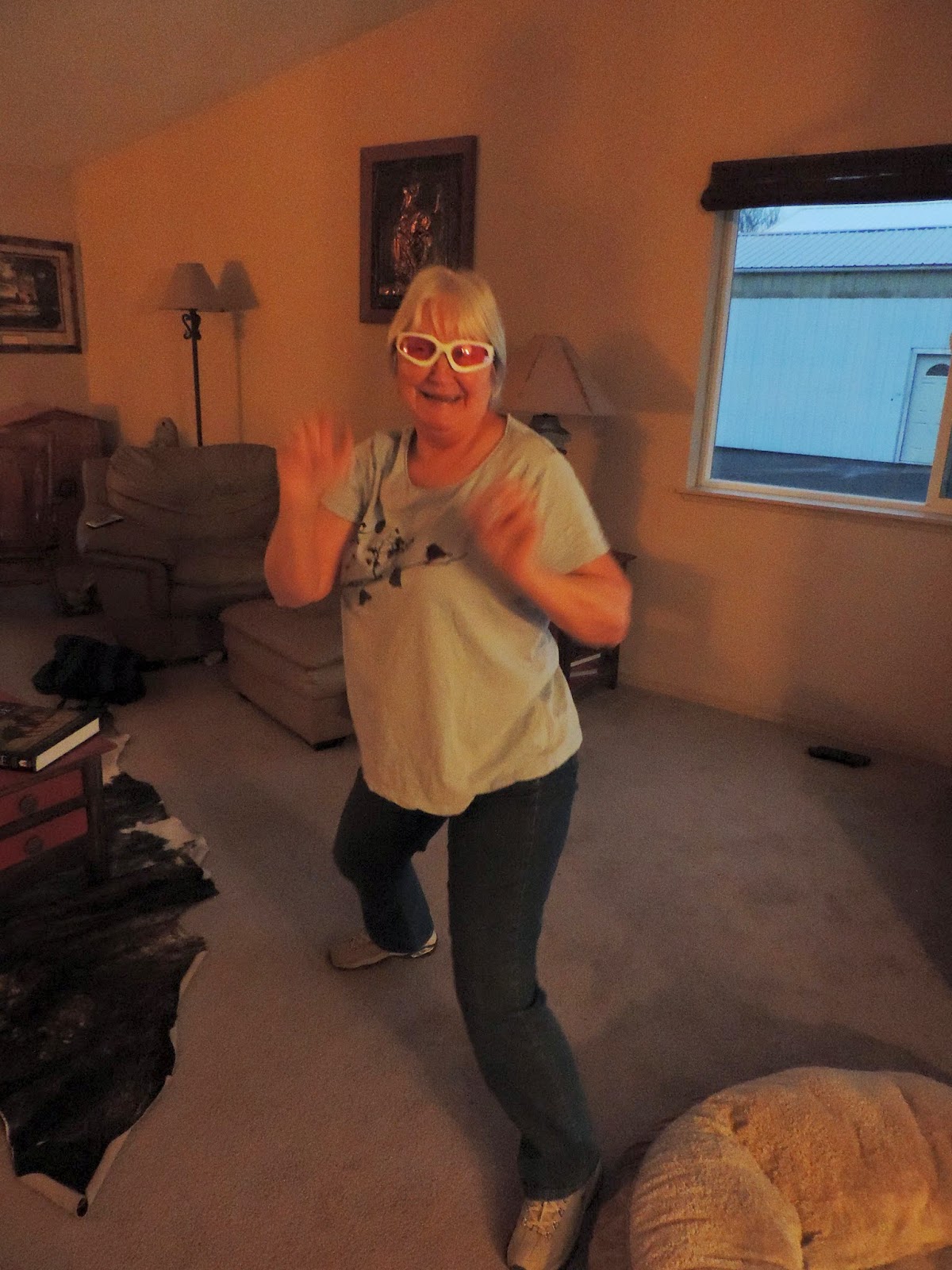 We had a Nerf Gun war after our great Thanksgiving feast. Grandma borrowed Brailey's protective eye gear. Sadly, her gun didn't work very well and she was hit several times with darts. A lot of fun was had in spite of this minor problem, however. The only fly in the ointment of the entire holiday weekend was when Brady had to leave us and drive to Redmond to work a Black Friday sale early the next morning. 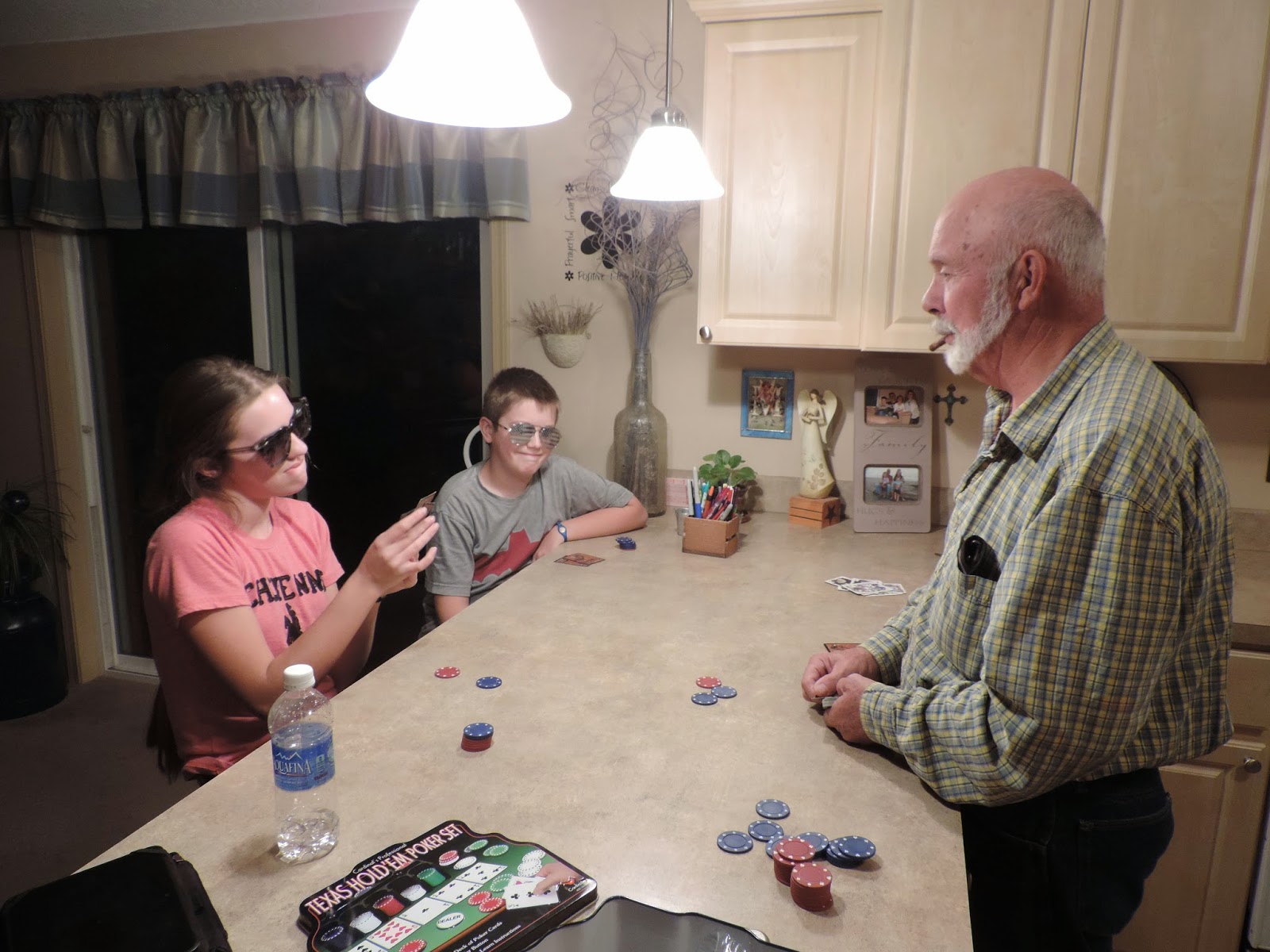 But we made the best of it, and while he was gone, we played some "21." As you can see, it was a very serious game, complete with a cigar and sunglasses! True casino style. 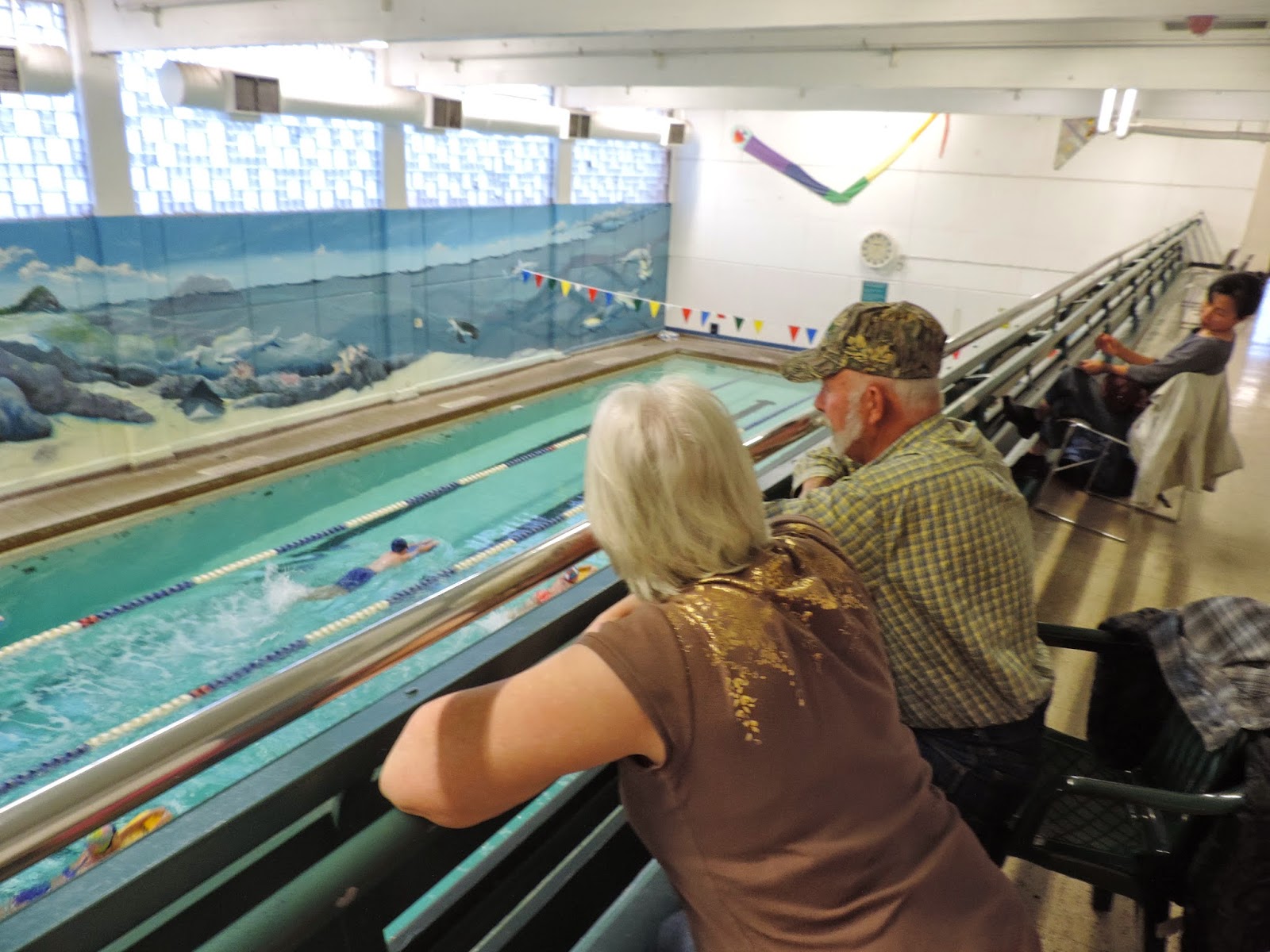 The next day, while Brady was selling silver, Grandma and Papa went for a walk with Britt and Bucky while I went for the first run I've been able to go on in over a month. It was nasty weather, but we prevailed. I injured my back a few weeks ago, but it seems to be mostly healed up, now, and it was so nice to be able to exercise! The fresh air did us all good. Brailey came down with a tiny cold, so she stayed in the house to recuperate. Later in the afternoon, Britt and I took Grandma and Papa with us to his swim practice. He is the body in the pool in the blue cap and jammers. Grandma got to see how hard he works during the summer when she came over to help us during Brady's broken leg travels. Papa was surprised and impressed with how disciplined Britt is and how strenuous the practices are. In typical Mace fashion, he was timing Britt's laps during the kick test set he did, and it is a shame we don't live closer, because he would fit right in with most of the other swim parents and grandparents, who also time their kiddos during practices. In any case, it was nice for Britt to be able to showcase his talent, because a swim meet doesn't really show all the hard work and dedication like a swim practice does. 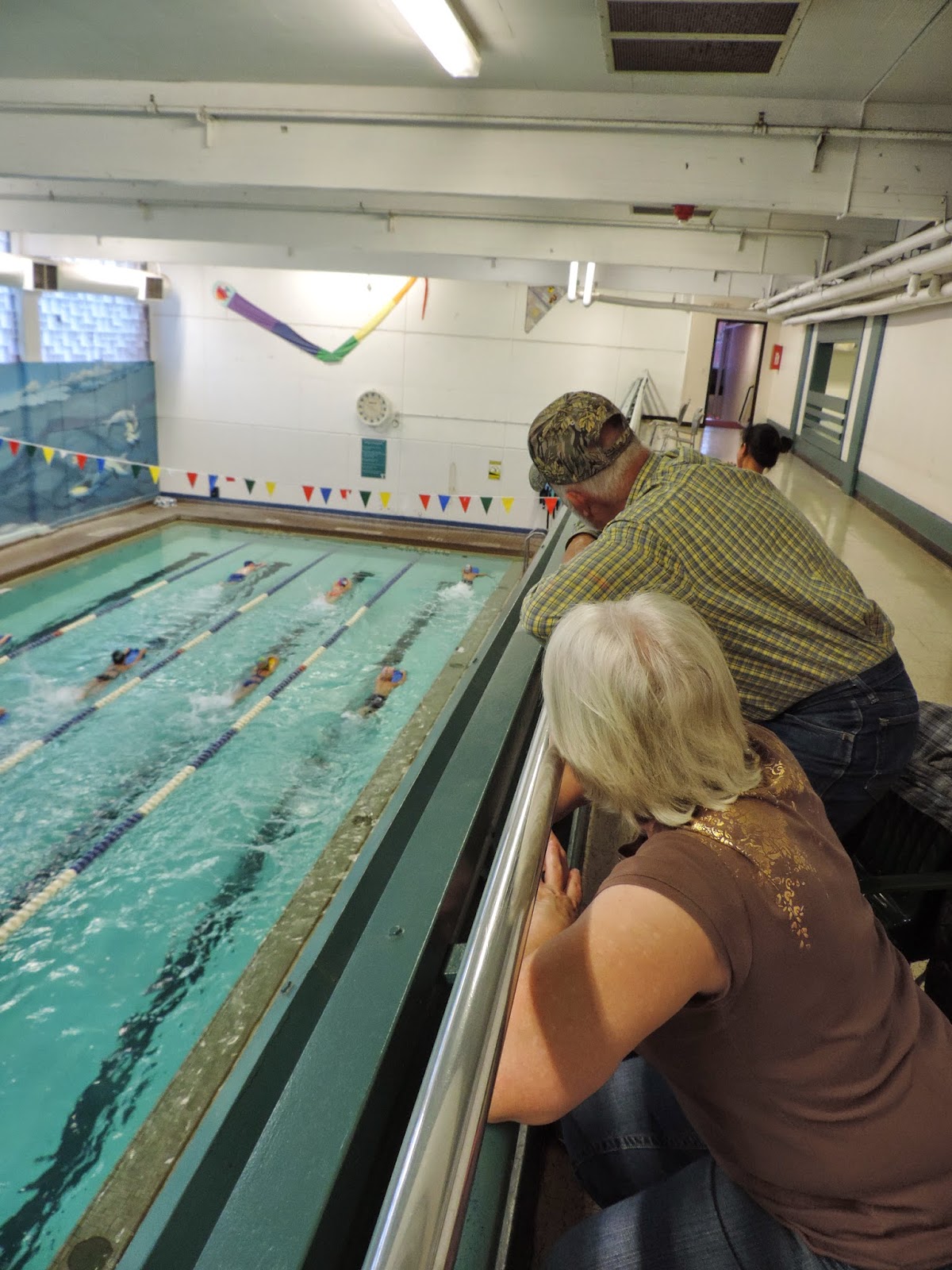 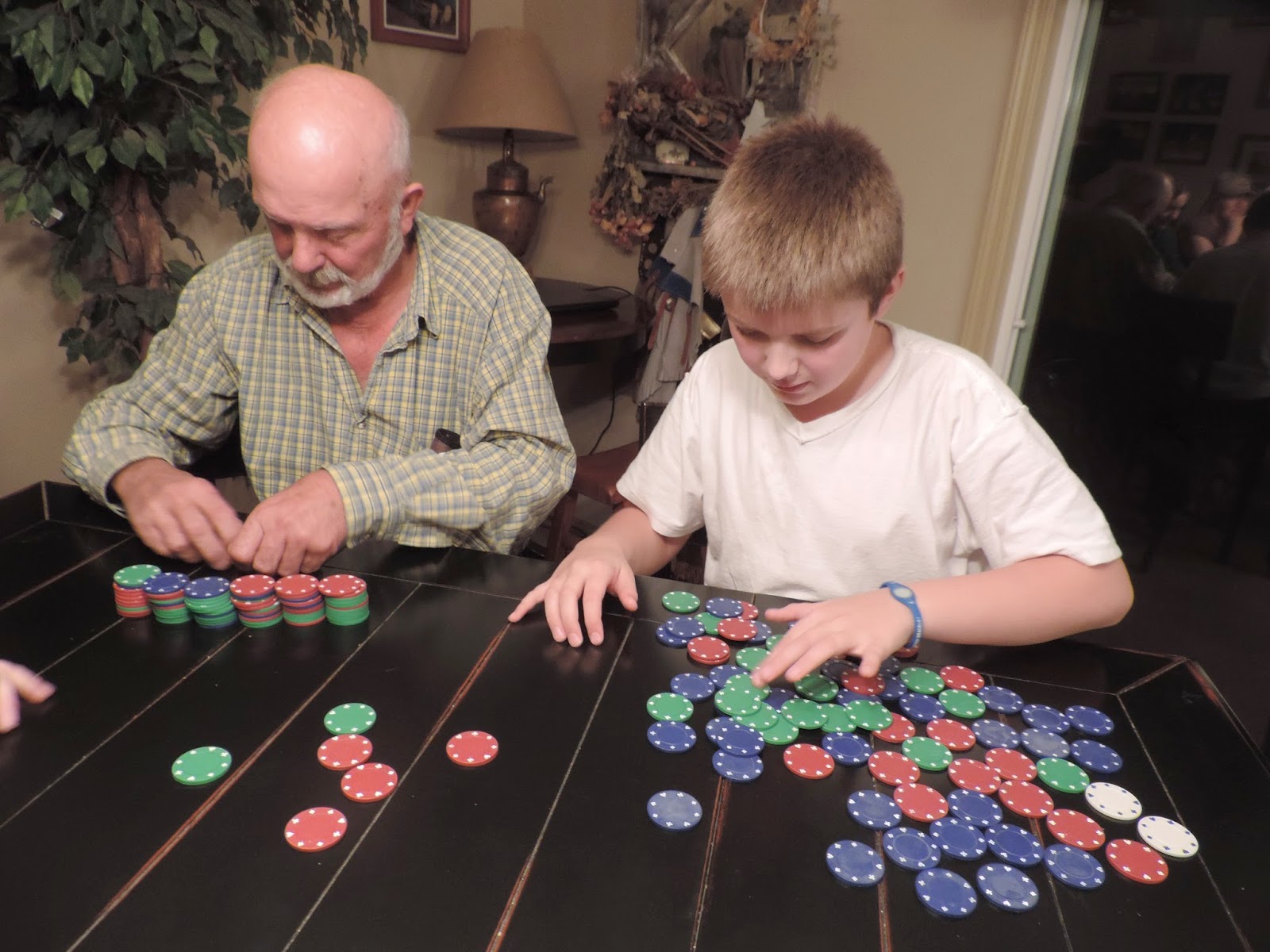 Later on that night, we played more 21 and then Brady showed us how to play 5 Card Stud, which was super fun. Papa and Britt were the big winners, and they were counting their "money" to see who won the most. These two are very competitive with each other, so it was funny for the rest of us to watch. 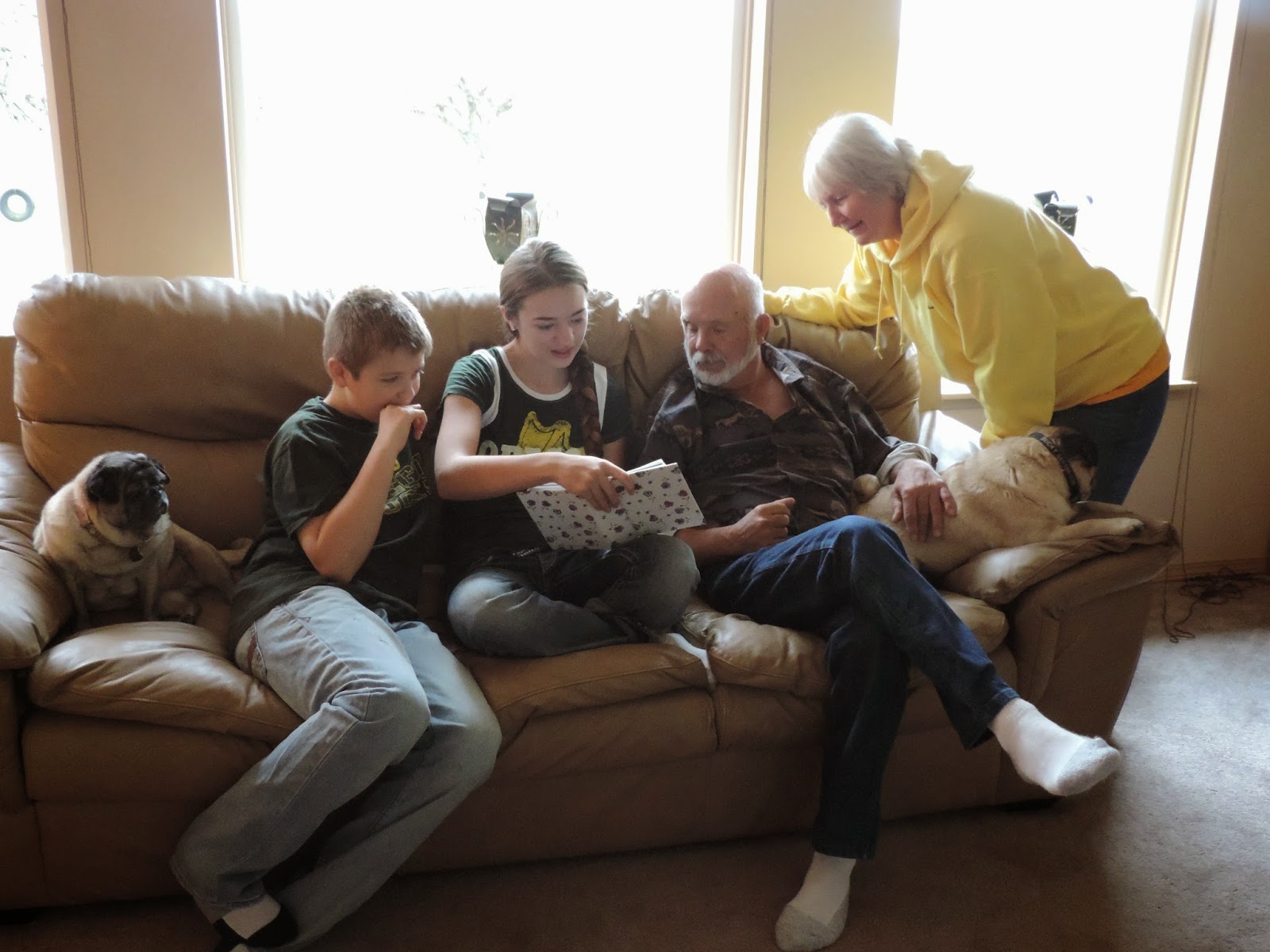 On Saturday, we all got "Ducked Out" in our Duck Wear for the Civil War football game that night. But first, Brailey found some old photographs. Out of the hundreds of albums in the chest, she randomly found one from a Thanksgiving years ago spent with my brother and his family, the most recent Thanksgiving we all spent together when my parents lived in Sisters. Britt wasn't even a year old at that time, and my dad's brother, Uncle Walt, brought Grandma Bert over for an afternoon. It was fun for the little B's to see pictures of everyone when they were much younger. 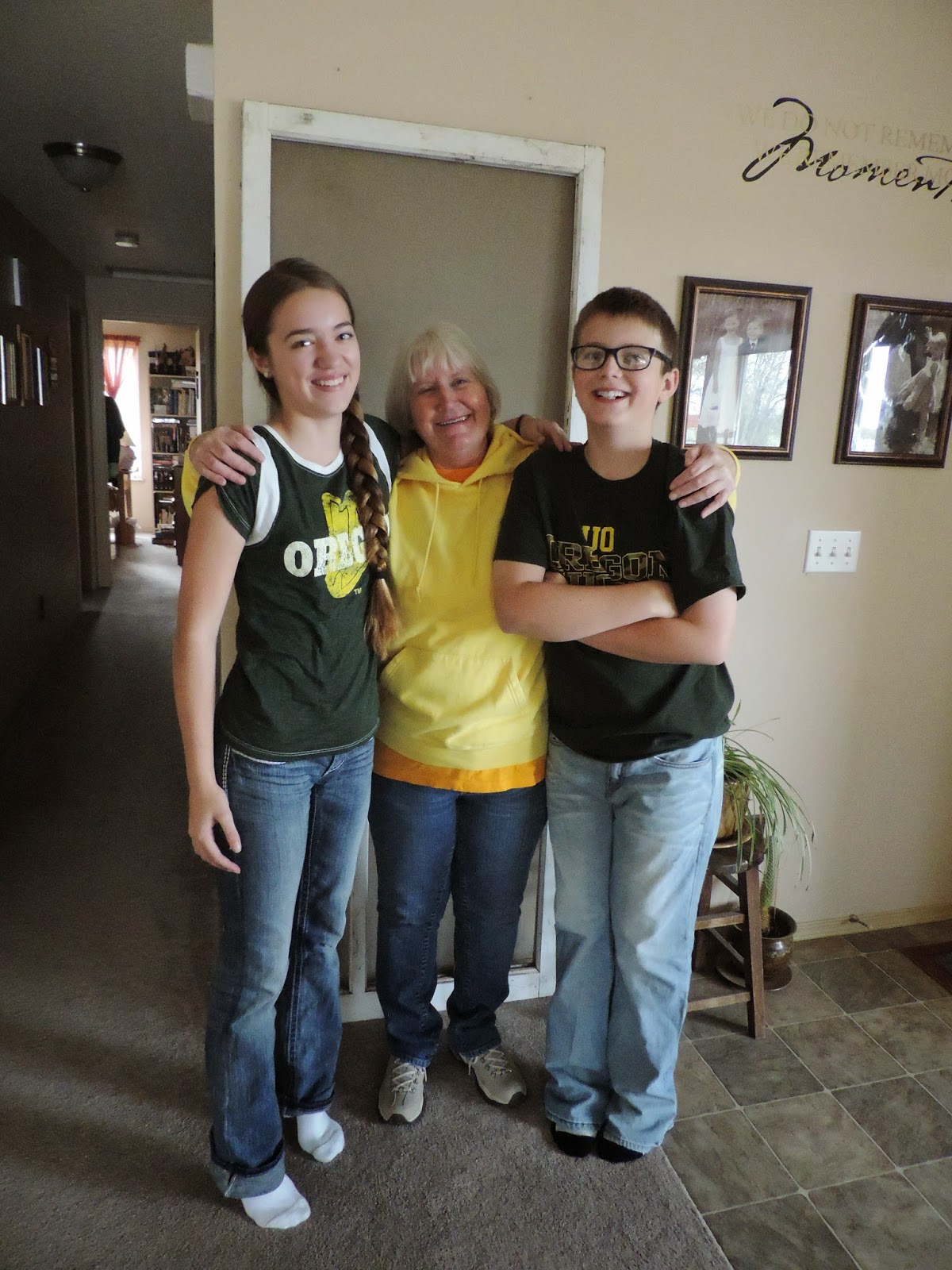 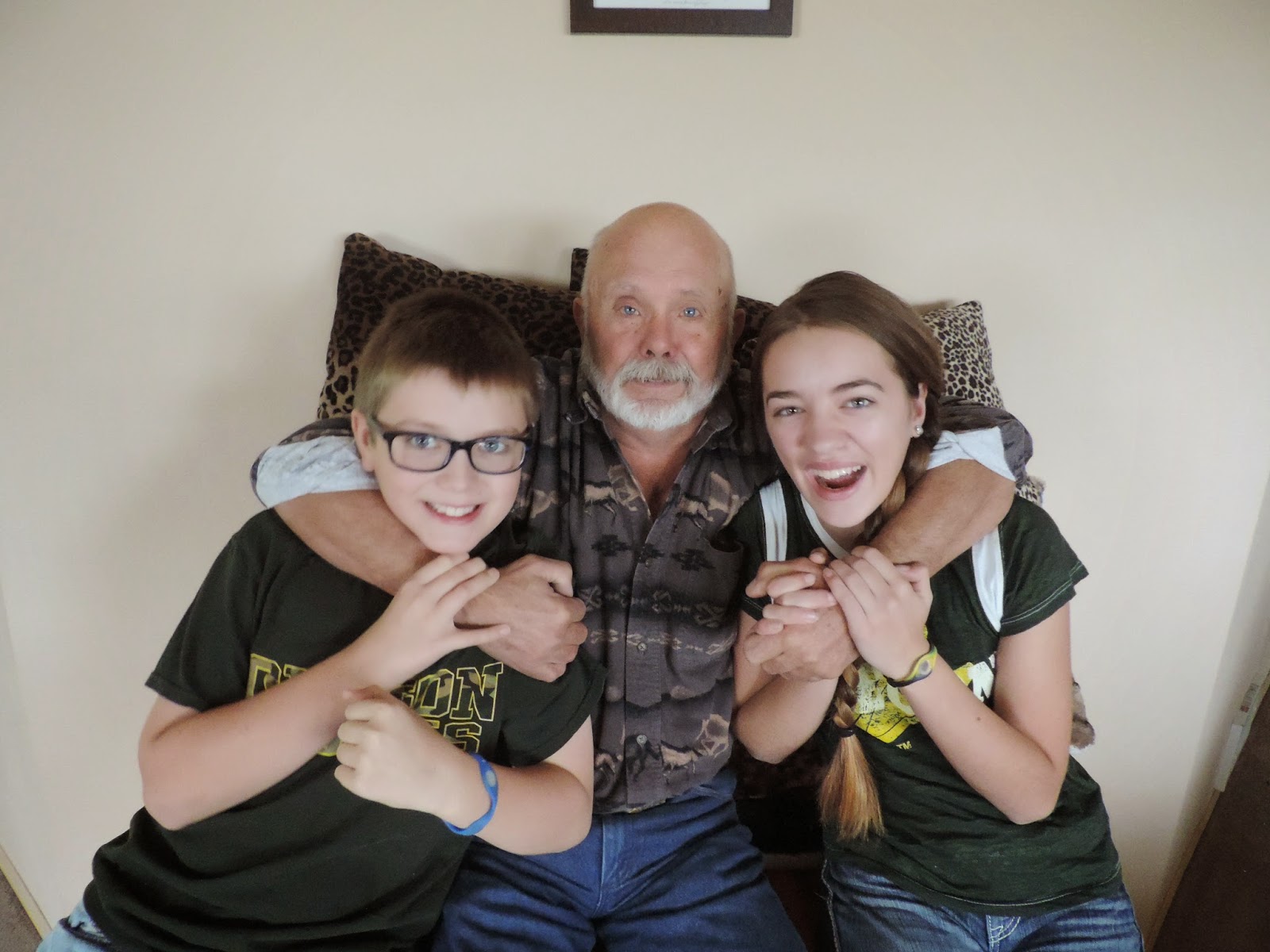 Before the big Civil War football game, we made our way to town to the movies to see the movie we had all been dying to see since last spring when we first saw the trailer for it - Dumb and Dumber To! We had originally planned to go on Thanksgiving Day, but when Brady unexpectedly had to go to Redmond, we changed our plans. We had watched Dumb and Dumber on Wednesday evening after Grandma and Papa arrived, so we were ready. Dumb and Dumber is our most favorite movie in the entire world, and us 4 B's have watched it several times this year. We just love it! Dumb and Dumber To did not disappoint - it was hilarious, and in our opinions, just as good as the first one! We were thrilled to watch the Ducks win the Civil War later that night, as well. GO DUCKS! 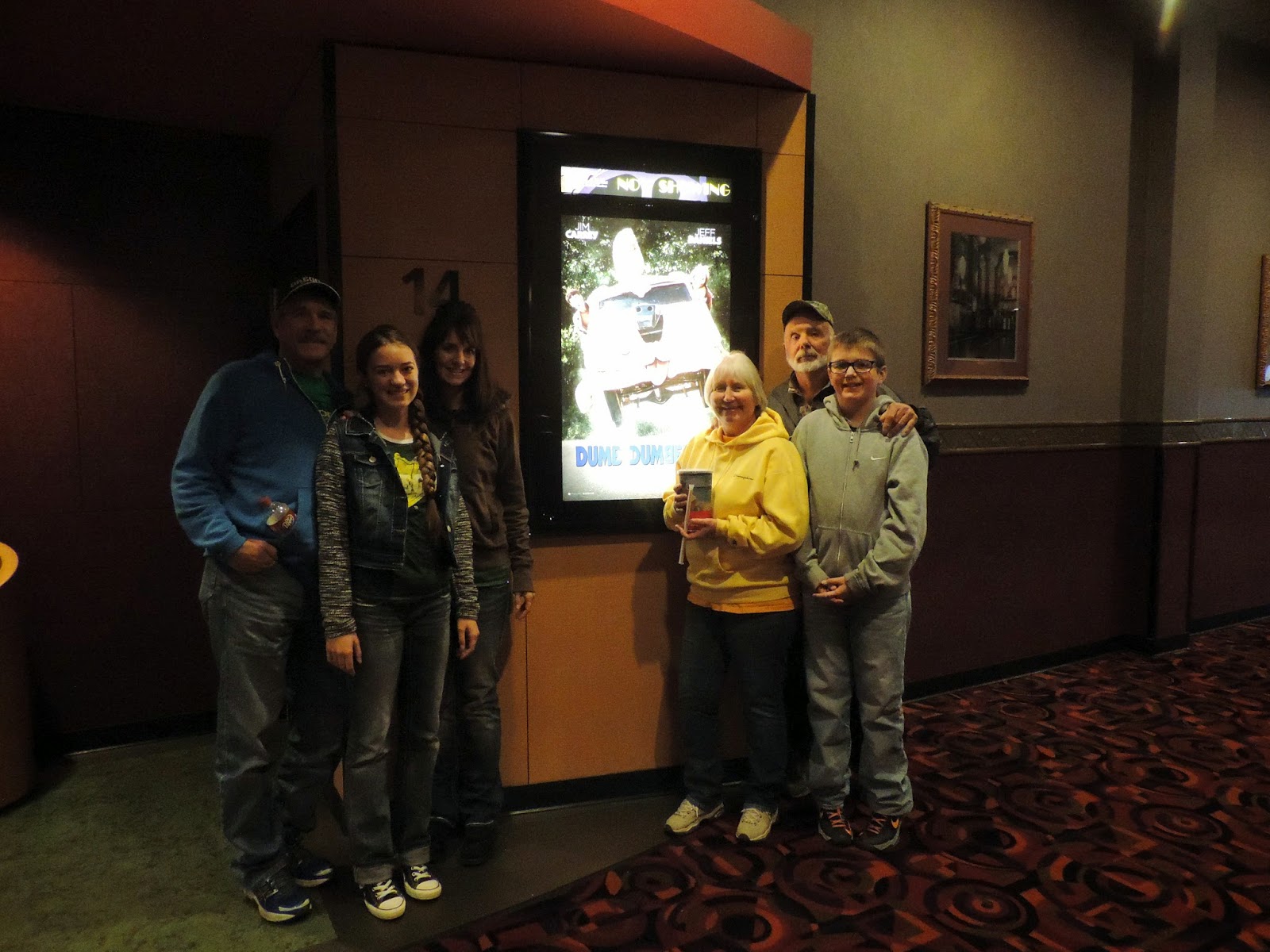 It was sad to see Grandma and Papa leave on Sunday, but we were so grateful to have the time we did with them. It is rare for Papa to be away from his home for more than a couple of days. We consider it a gift and we are so happy to have the special memories to cherish! There is nothing so precous as spending time with the people you love. We did even more things than this post includes, but those are the highlights and we are grateful from our heads to our toes to have experienced such a special Thanksgiving holiday, one our little B's can look back on with love. Love and family - it's what makes the world go 'round!
at December 01, 2014