Well, to tell you the truth, it was a dream come true for me to attend my first Denver Mart. Call me crazy, but I had heard so much about it from Brady, I was absolutely thrilled to my toes when Ali Dee Collection got in! We actually didn't find out until a couple of weeks into December, because we were put on a waiting list. So I was excited and nervous and happy! As life would have it, I was thrown a couple of curve balls right off the bat, but if everything had gone smoothly, it wouldn't have been as good of a story, right? So the two weeks before Denver, we were crazy busy, even a little more so than usual. After all, getting ready is the hardest part - all that preparation! So Brady's flight was an early one, and after a full day of volleyball the day before, we got up at 3 in the morning to get him to the airport. No, I didn't go to bed when I got back home. The next night, when I could have slept like a log, I came down with a horrendously sore throat. I couldn't believe it! I barely slept. The next night, the night before my own early morning flight, after arriving home at about 8 in the evening, I discovered a problem in our barn which required some repair - just what I wanted to do in the dark the night before my big trip. But thanks to Brailey's help, I was able to get the situation under control. And I am thanking our lucky stars the horses were not injured. Phew! However, I was so nervous and excited and worried about the fog canceling my flight early the next morning, I couldn't sleep! I finally gave up trying at 2:AM and just got up. I was the first one to the airport! All was well and good, despite my rattled nerves, until the airline announced they had overbooked the flight and needed three, THREE, people to give up their tickets or some people might not be able to get on the plane - they would tell us at the gate. My heart was pounding! I HAD to get on that plane! After looking it up, I discovered the practice of airline overbooking is completely legal. What could I do but pray? I was so relieved to be on the plane, I burst into tears the second the very nice flight attendant asked me how I was. I was a wreck! I missed my babies already. (And the tears flow like a river since we lost Maggie - I just can't control them like I used to. MORTIFYING!) However, I arrived in Denver safe and sound, saw JB Mauney as I was getting on the tram, saw Miss Rodeo America as I was getting my cab, and made it to the Mart easy peasy. I was so happy to meet Ali and Devon, and they were super sweet to me and we got the booth up in a flash! Then, I had the rest of the day to mingle with Montana Silversmiths - it was great! EXCEPT... I was really, really, really tired. And I didn't realize it, but I had a touch of altitude sickness. When you fly into Denver, you are supposed to drink a gallon of water immediately - I didn't know this. My head ached, I felt slightly queasy and lightheaded and, frankly, a little high. I now know it was the lack of oxygen, after talking to other folks who suffered the same problem. Plus, I had a weensy bit of a bug I was fighting. After a good night's rest, though, I felt good as new, and the real fun began, as you will see below in the pictures. In case I haven't mentioned it, Denver Market was FUN, FUN, FUN! 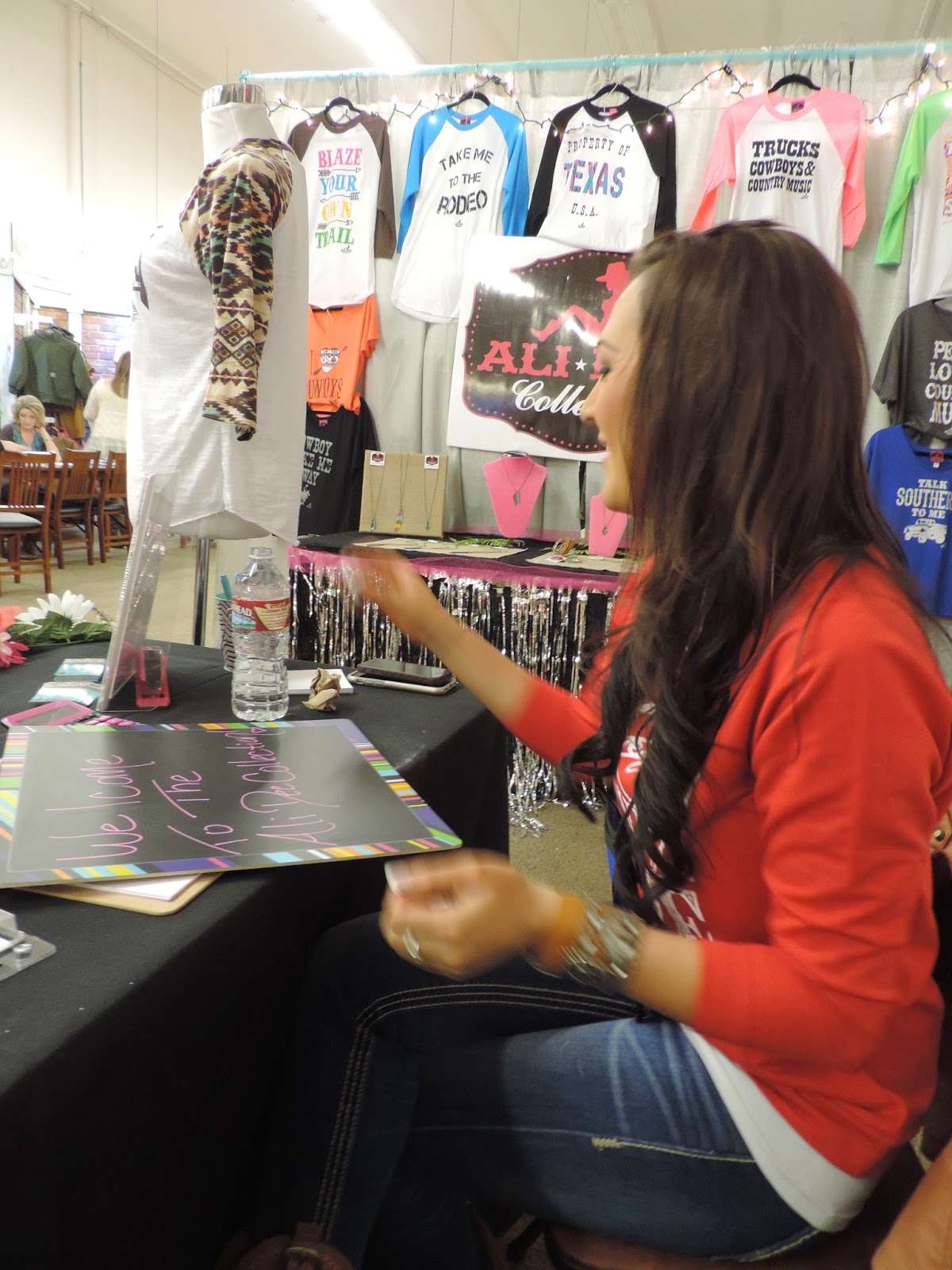 Devon, above and Ali Dee, below, making the final preparations to the booth. Devon is an artist, and she can do these amazing loopy hearts. They were trying out their new chalk markers, which are super cool, once you figure out how to use them. 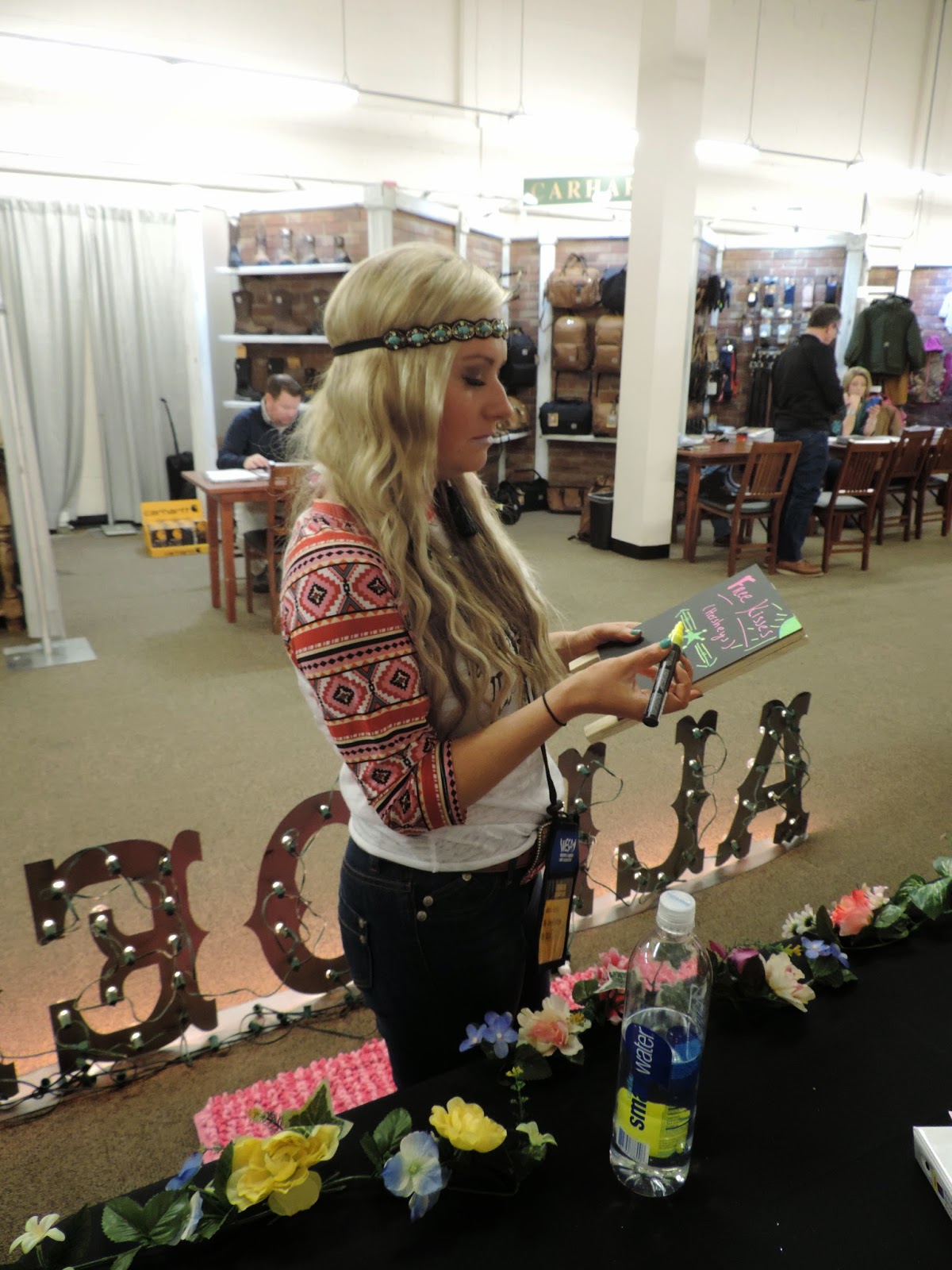 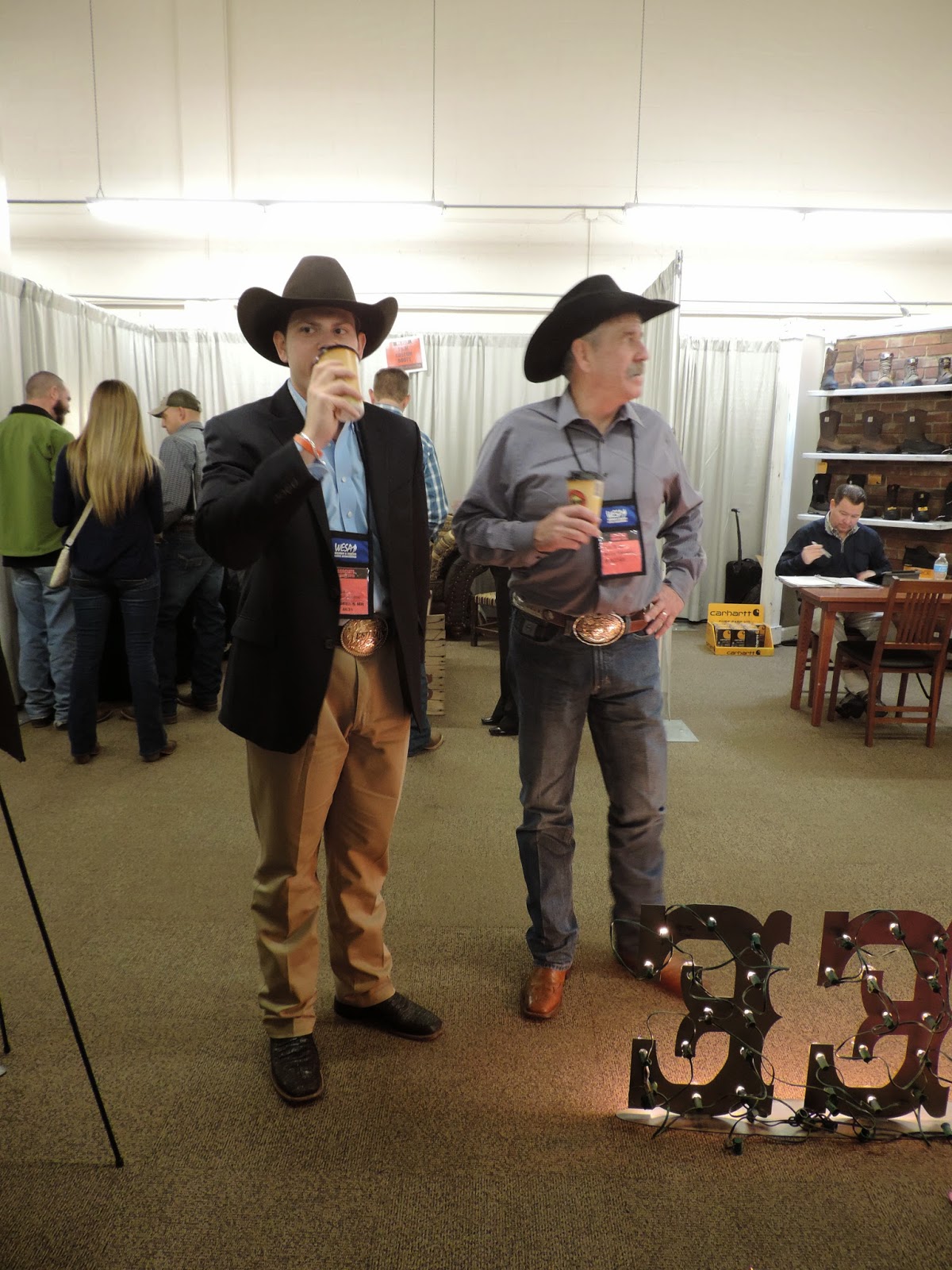 Brady was so sweet and caring the entire time I was there, making sure I was fed and hydrated, and he brought down several people to our booth. Above, he is with one of the rising Montana Silversmiths stars you may have seen in my previous post, CJ. He is the sweetest gentleman you will ever find! No surprise, he's from Texas. 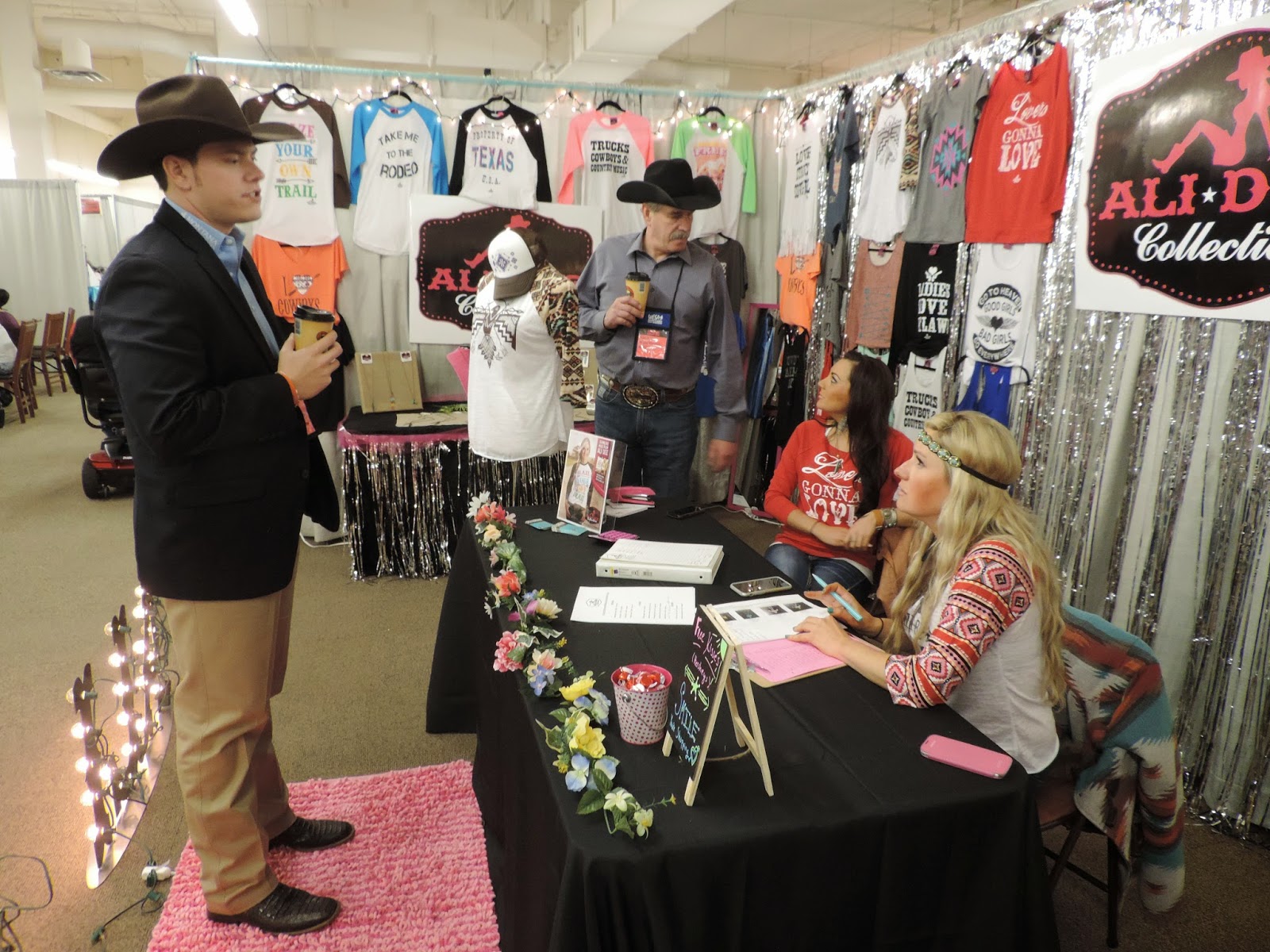 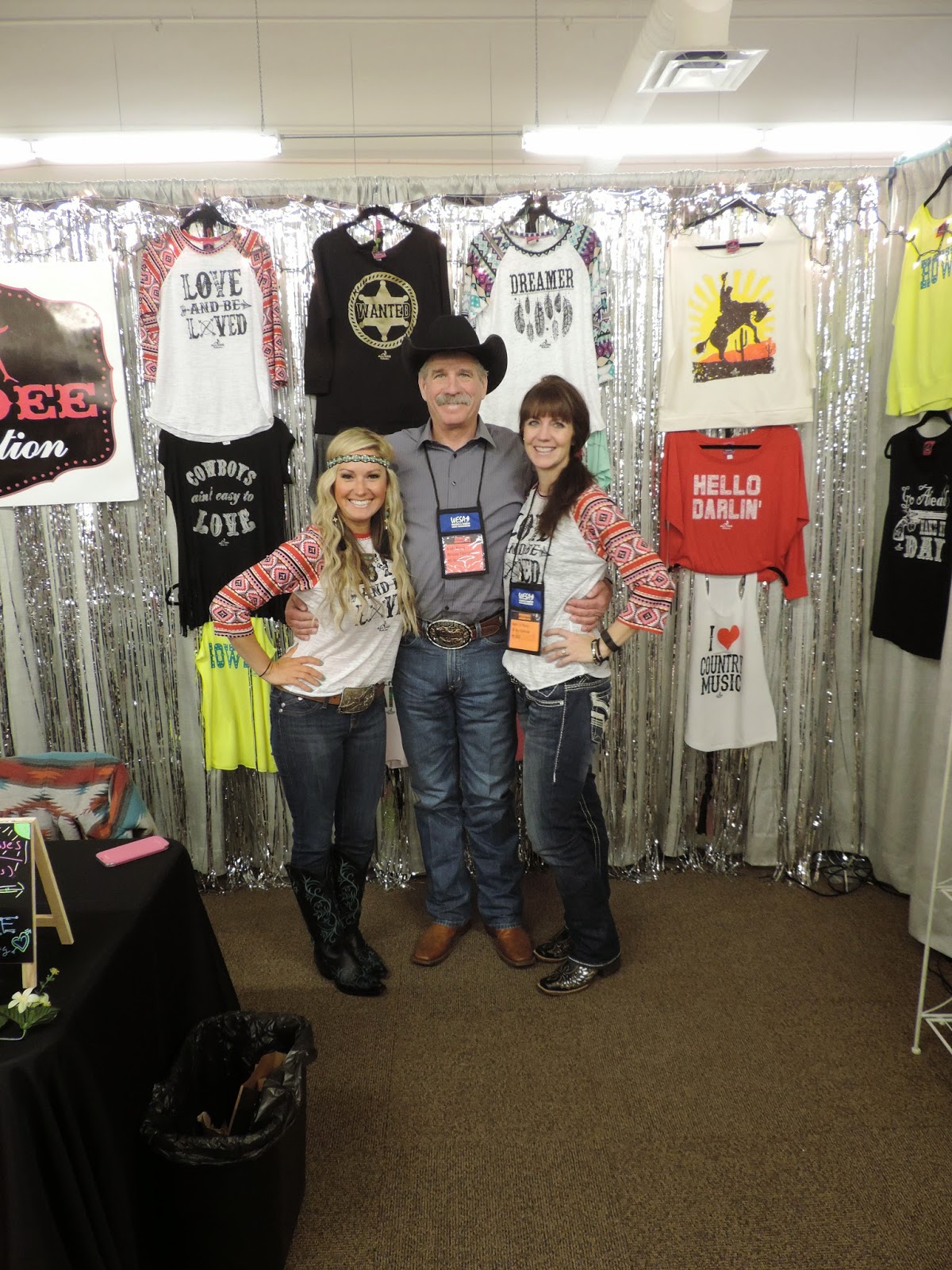 PICTURE TIME! I was so happy to meet these girls (my bosses!), and it was an occasion that definitely called for pictures. Lots of them! I admit it - I was absolutely star struck! I have loved Ali Dee since I saw her on Texas Women, so it was super fun to meet her. It felt like I had known her forever! 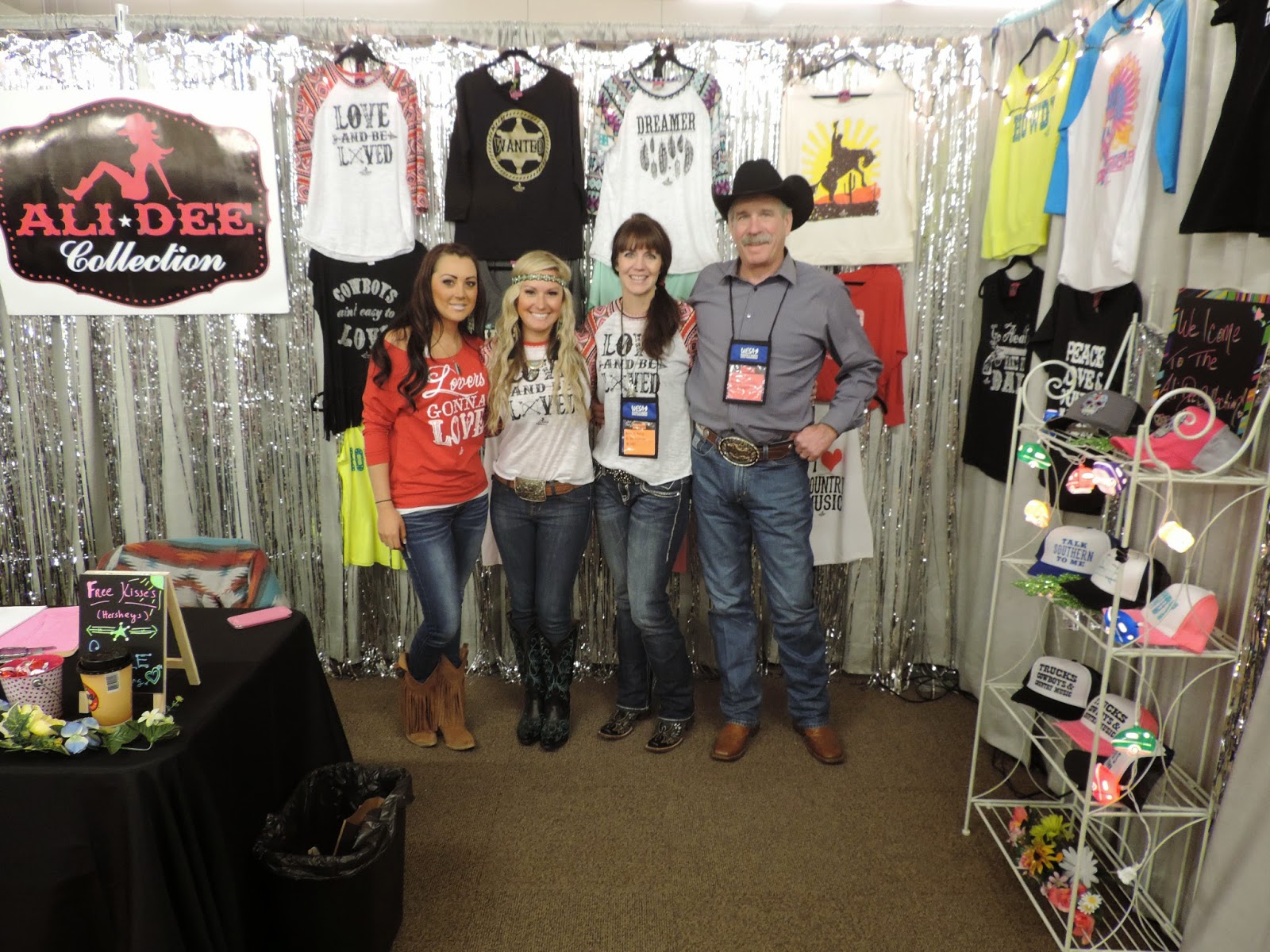 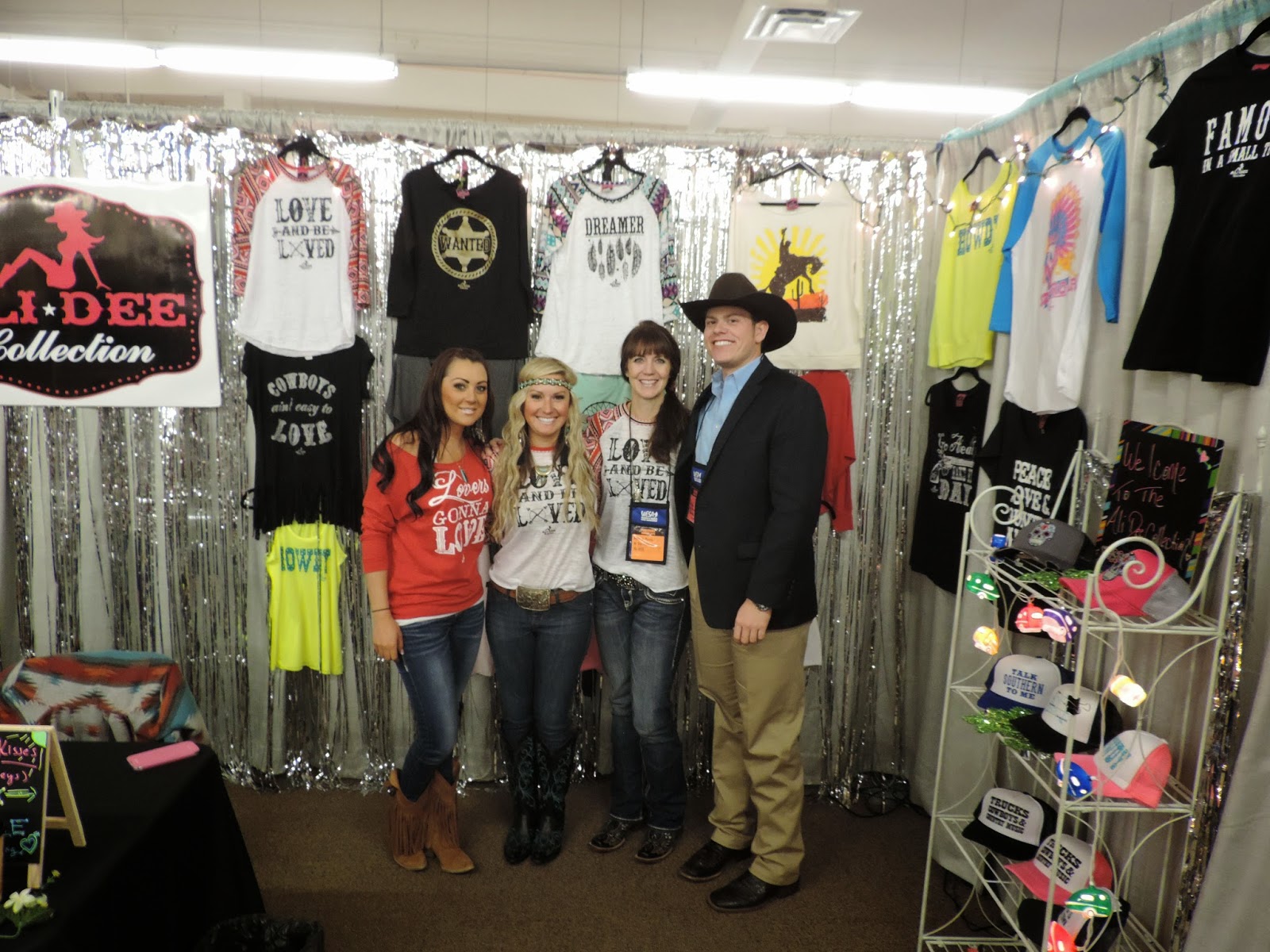 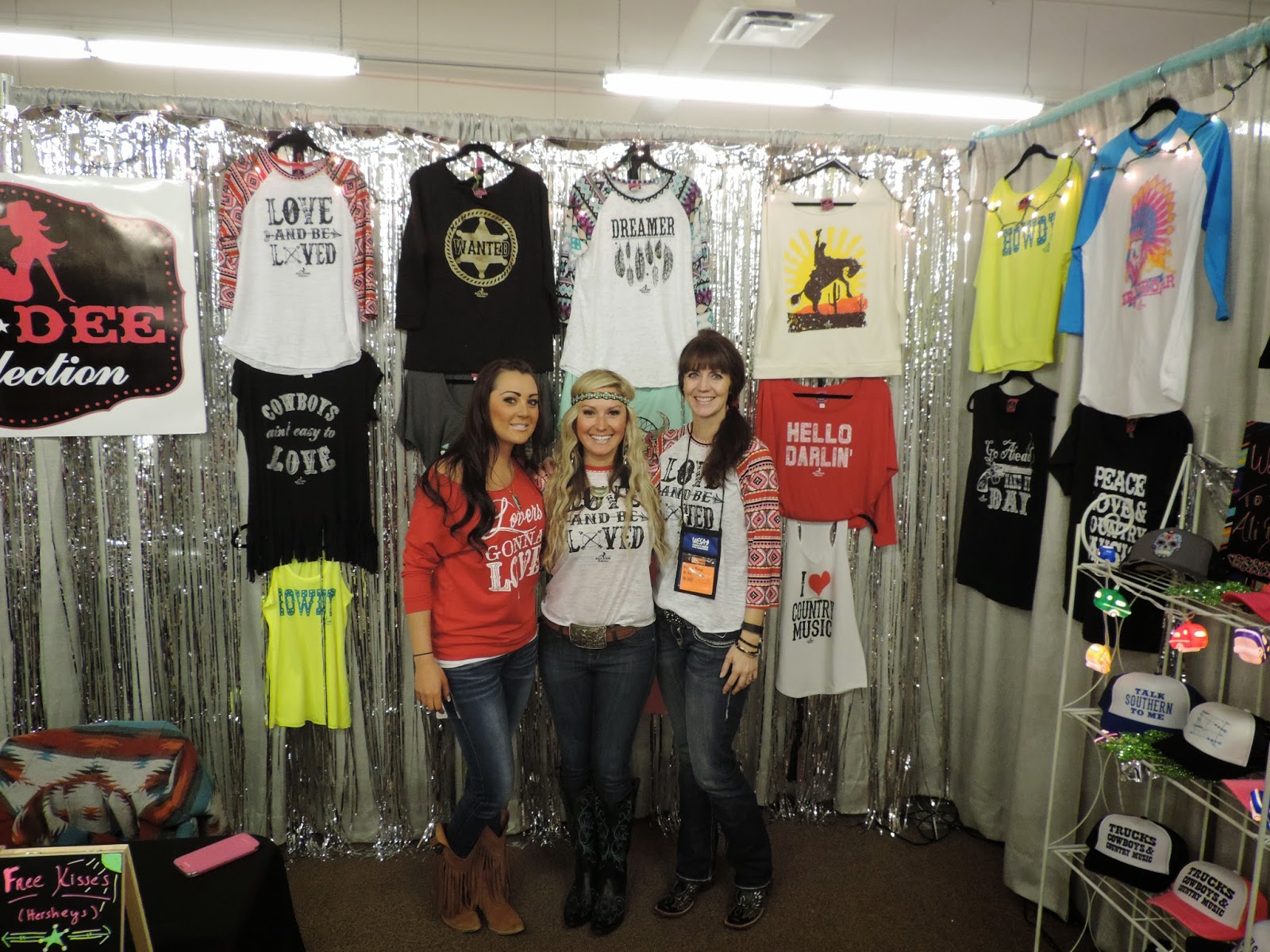 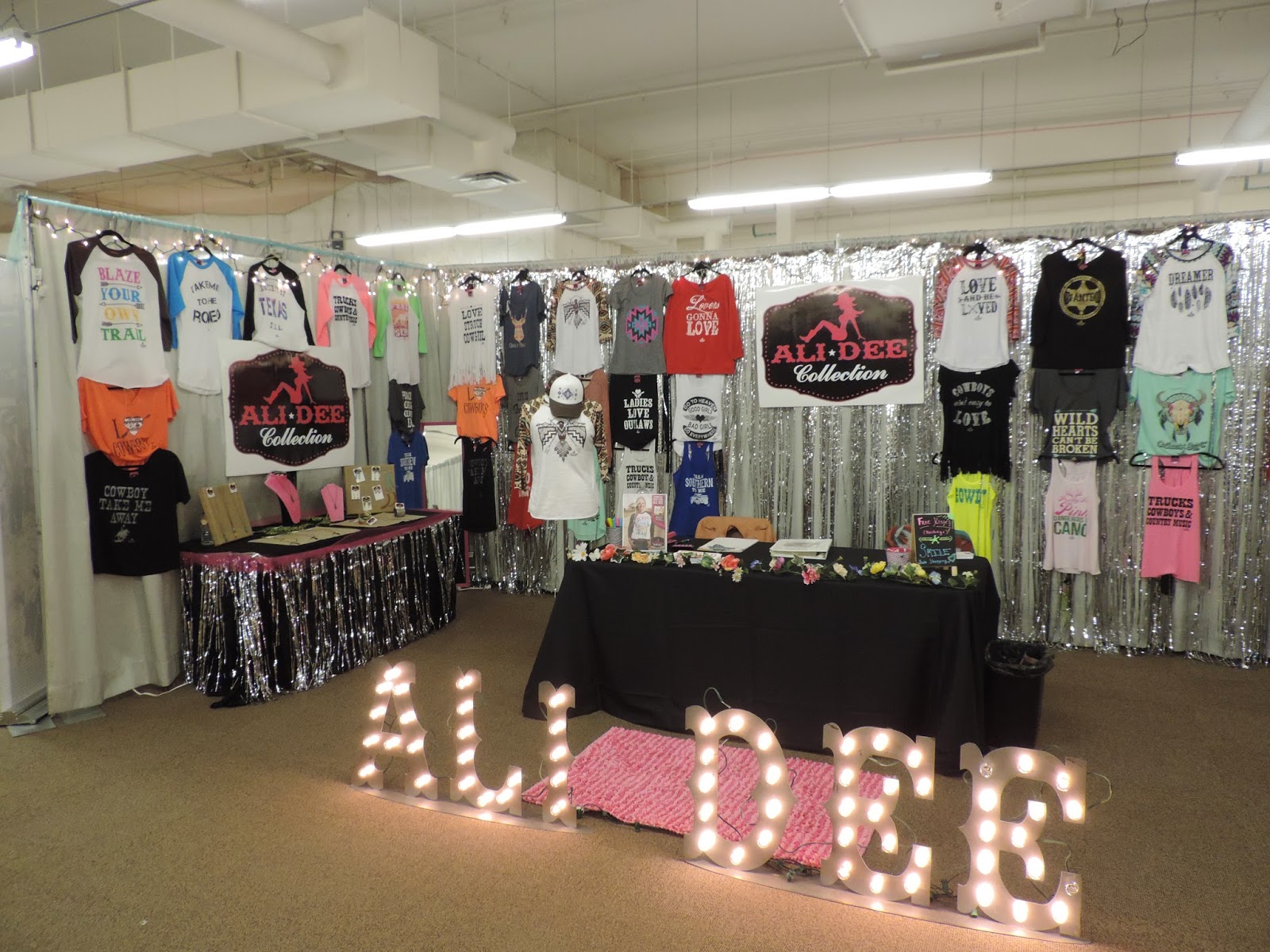 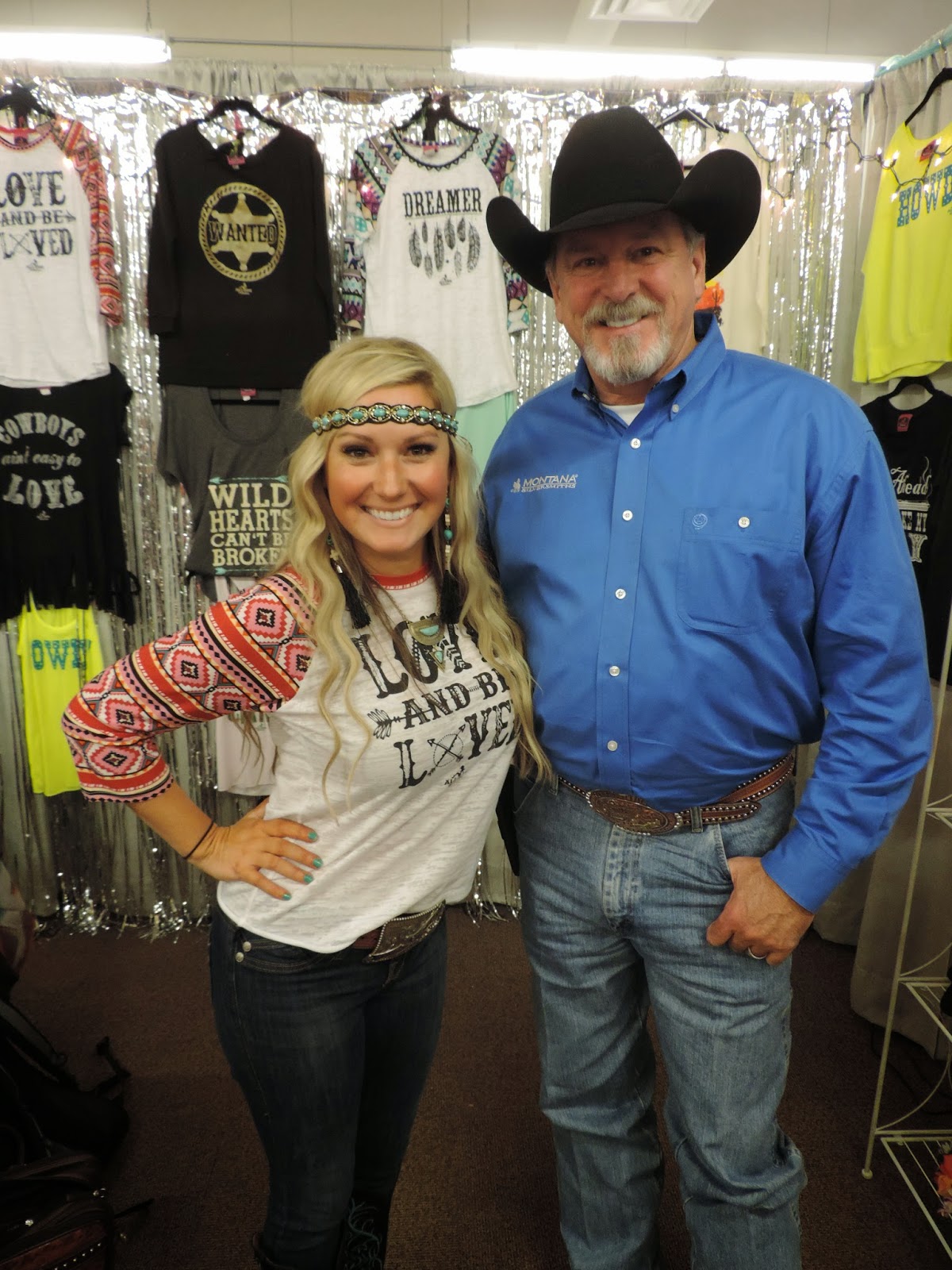 Brady even brought down his first boss from Montana, Steve Miller, to our booth. The day before, Montana Silversmiths fed us Ali Dee Collection girls lunch, and Steve had a lively conversation with us about football, Texas real estate and rodeo clowns. Oh! And my favorite rodeo clown and friend, JJ Harrison, stopped by while we were there, and we got to catch up with him. It was super fun and cool! 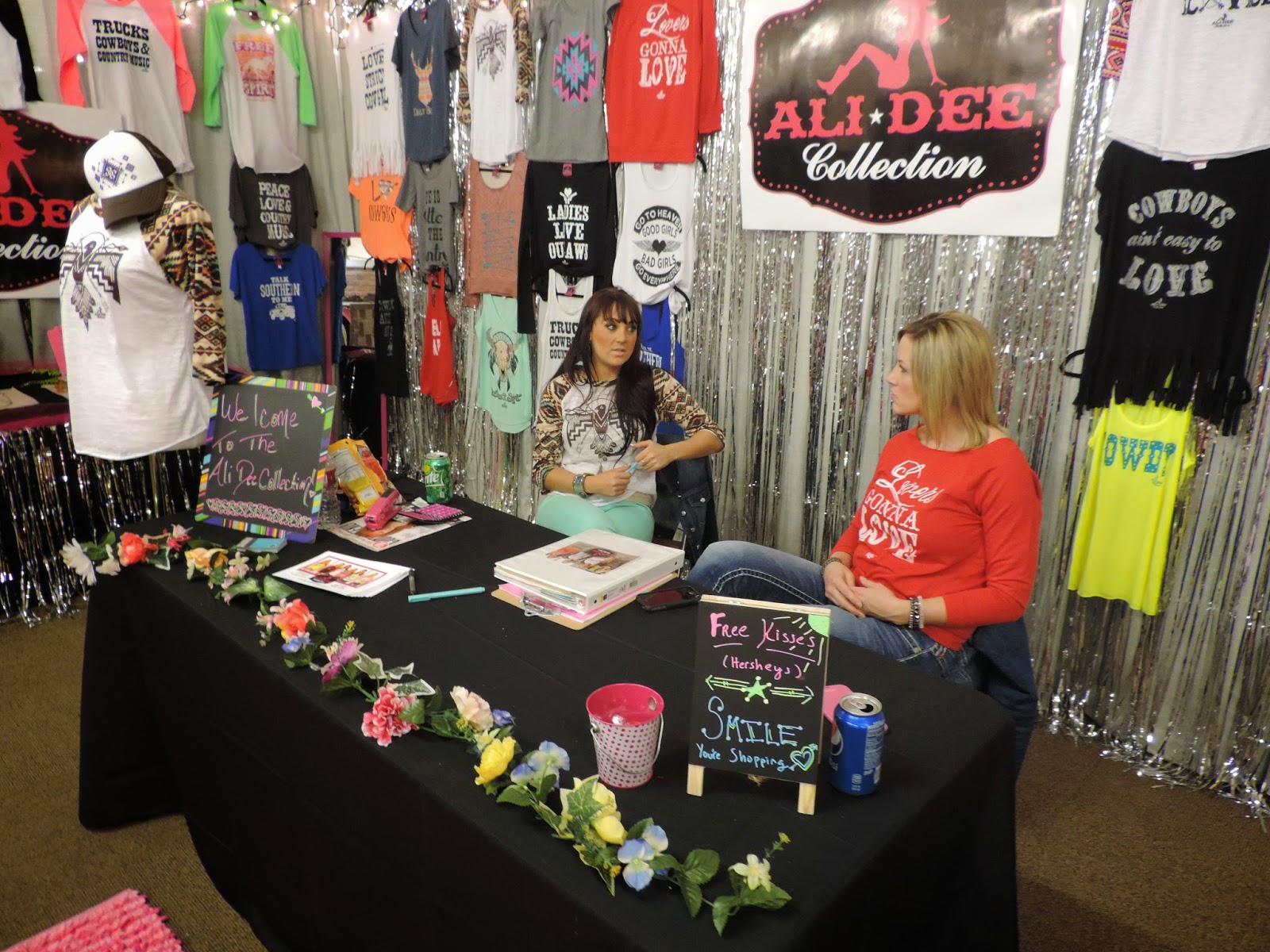 And then another dream of mine came true - I got to meet our Social Media Director and fellow Sales Rep, Laurin! We bonded over motherhood, volleyball and our love for Ali Dee Collection, and so it felt like I already knew her, and I couldn't wait to meet her! She lives about two hours from Denver, so she left her sweet hubby with their three kids, including their little 6 month old baby boy. I could spend HOURS with Laurin - the day flew by way too fast, but I loved every single second of being with her. She is a rock star, and I am madly in love with her. She is a SWEETHEART! 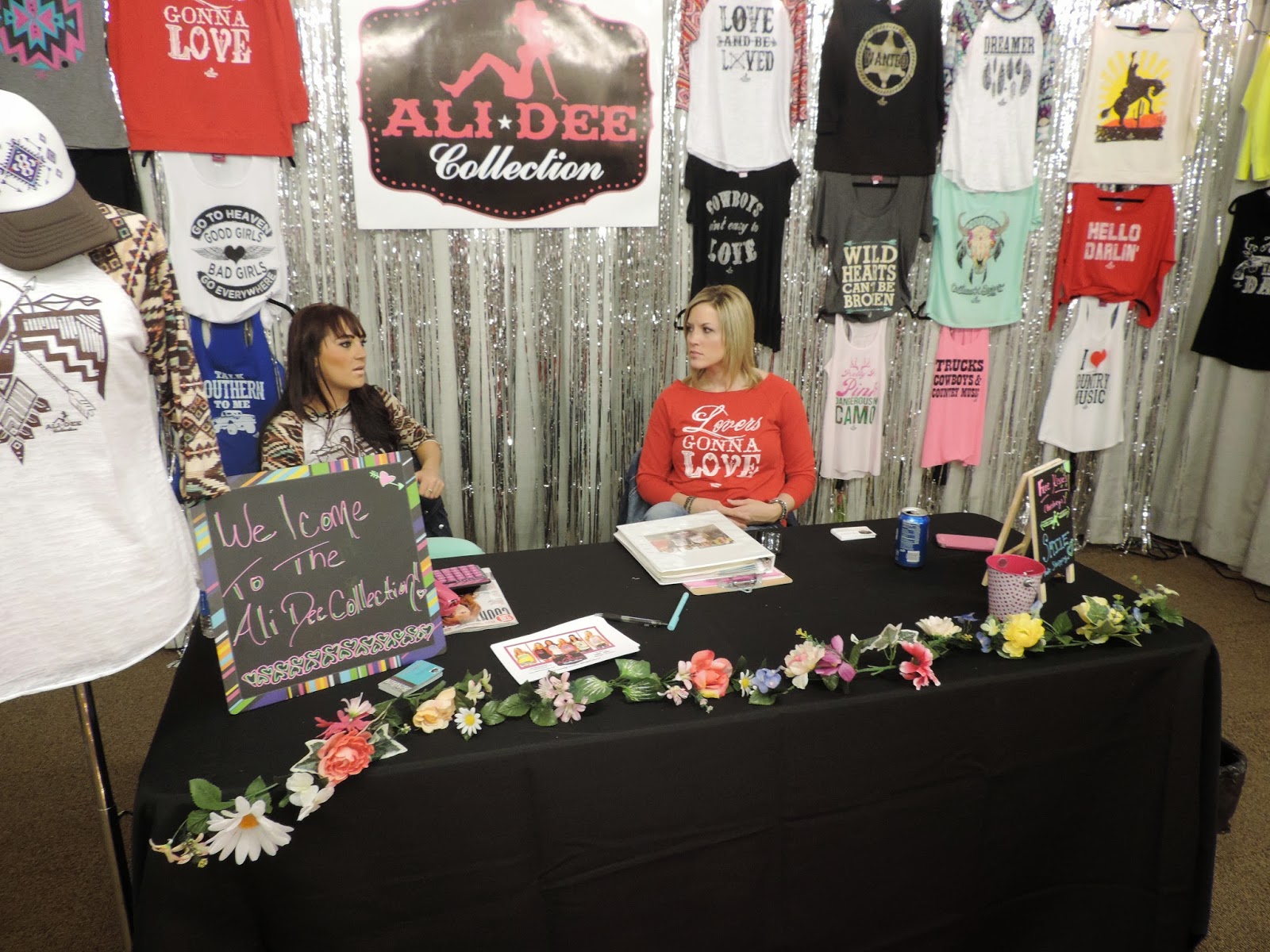 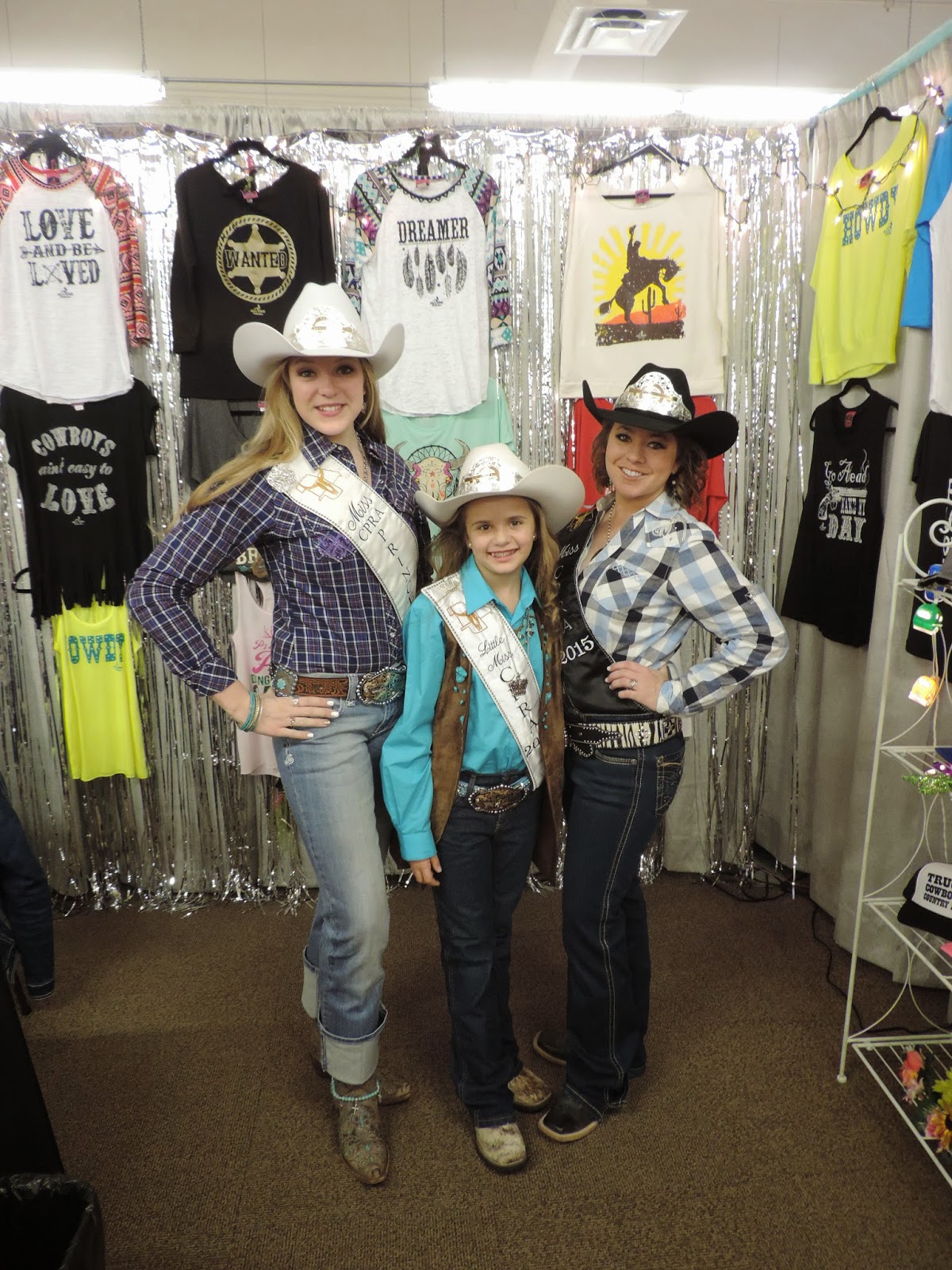 These girls were so fun and cute! The CPRA, Central Plains Rodeo Association. The tall one was so excited about our Blaze Your Own Trail shirt, because her name is Blaze. Adorable! 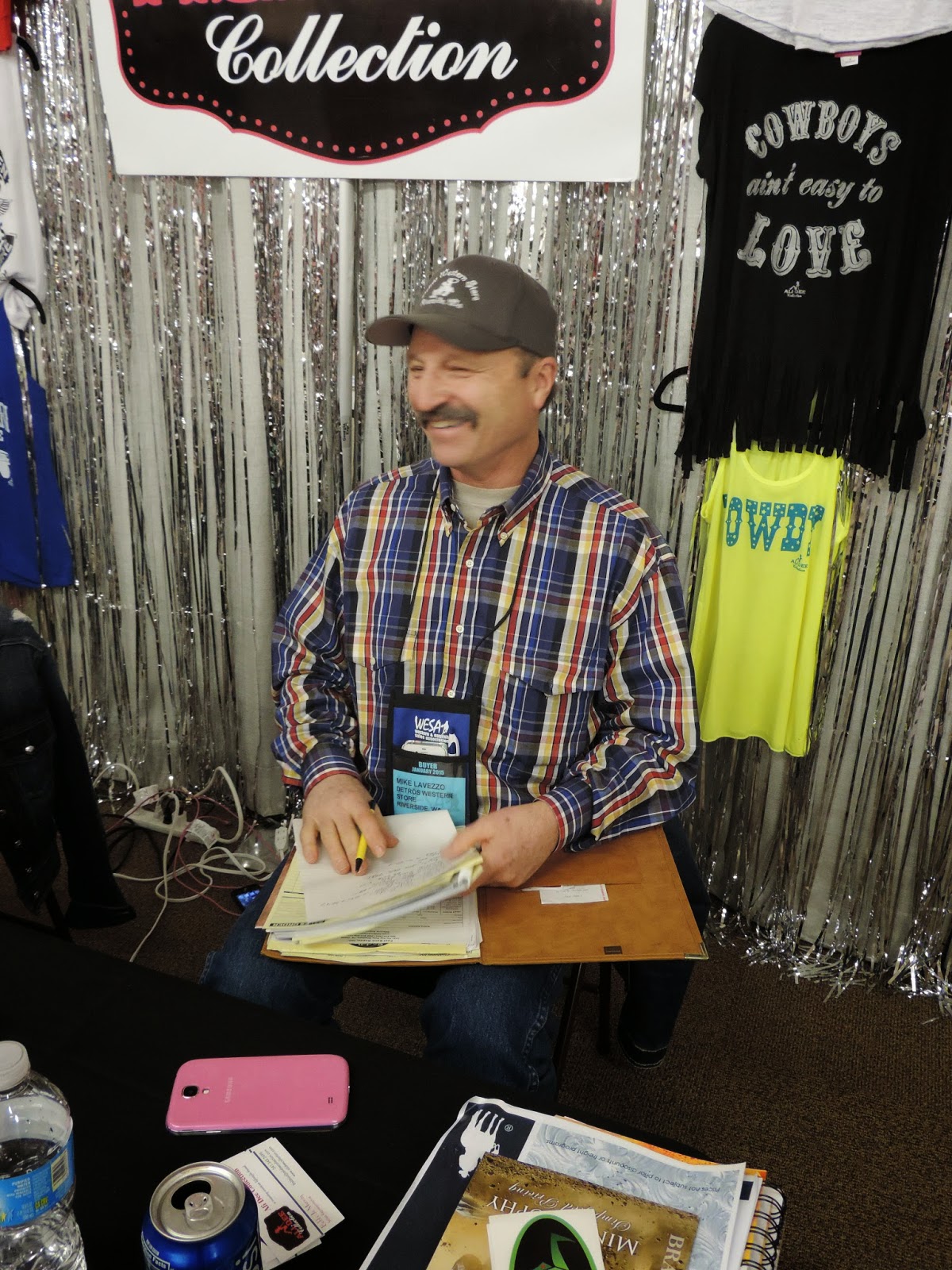 My new friend Mike from Detros Western Store in Riverside WA. He was awesome! We talked Facebook, Instagram and team roping. He is good friends with Brady and has a great store! 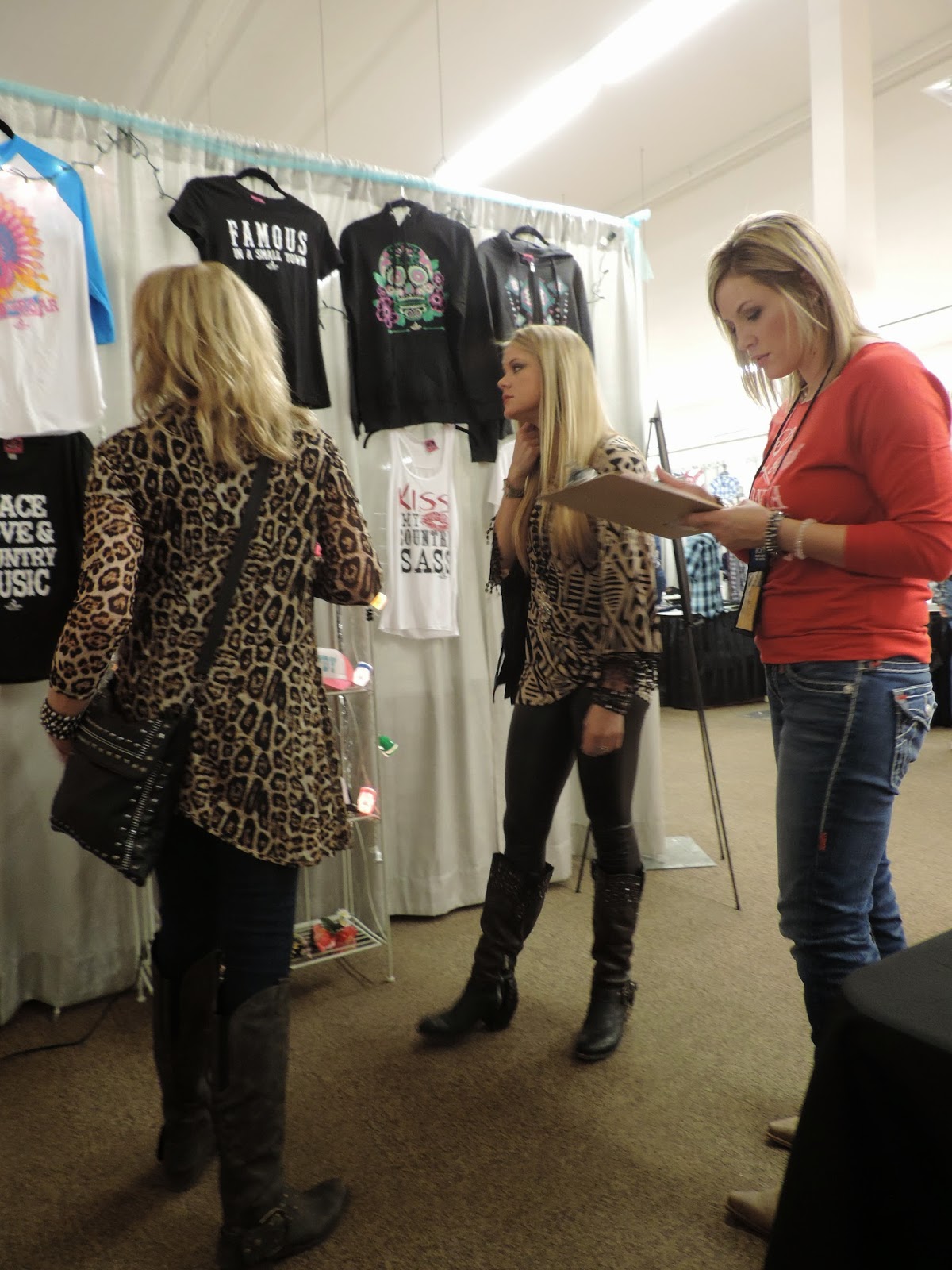 Laurin had a fantastic day with her territories - it was so perfect! This was a mom and daughter duo, and aren't they CUTE?! 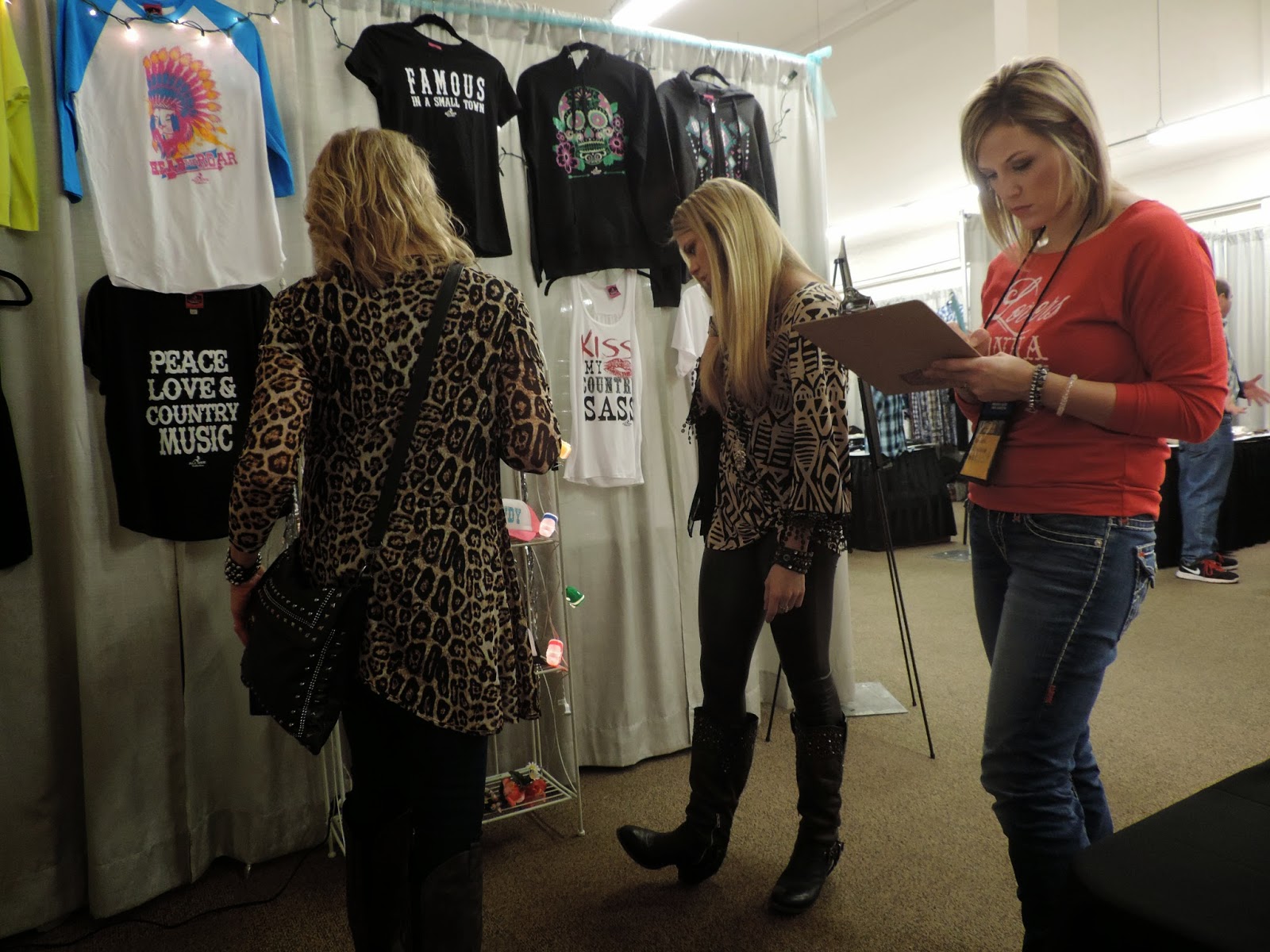 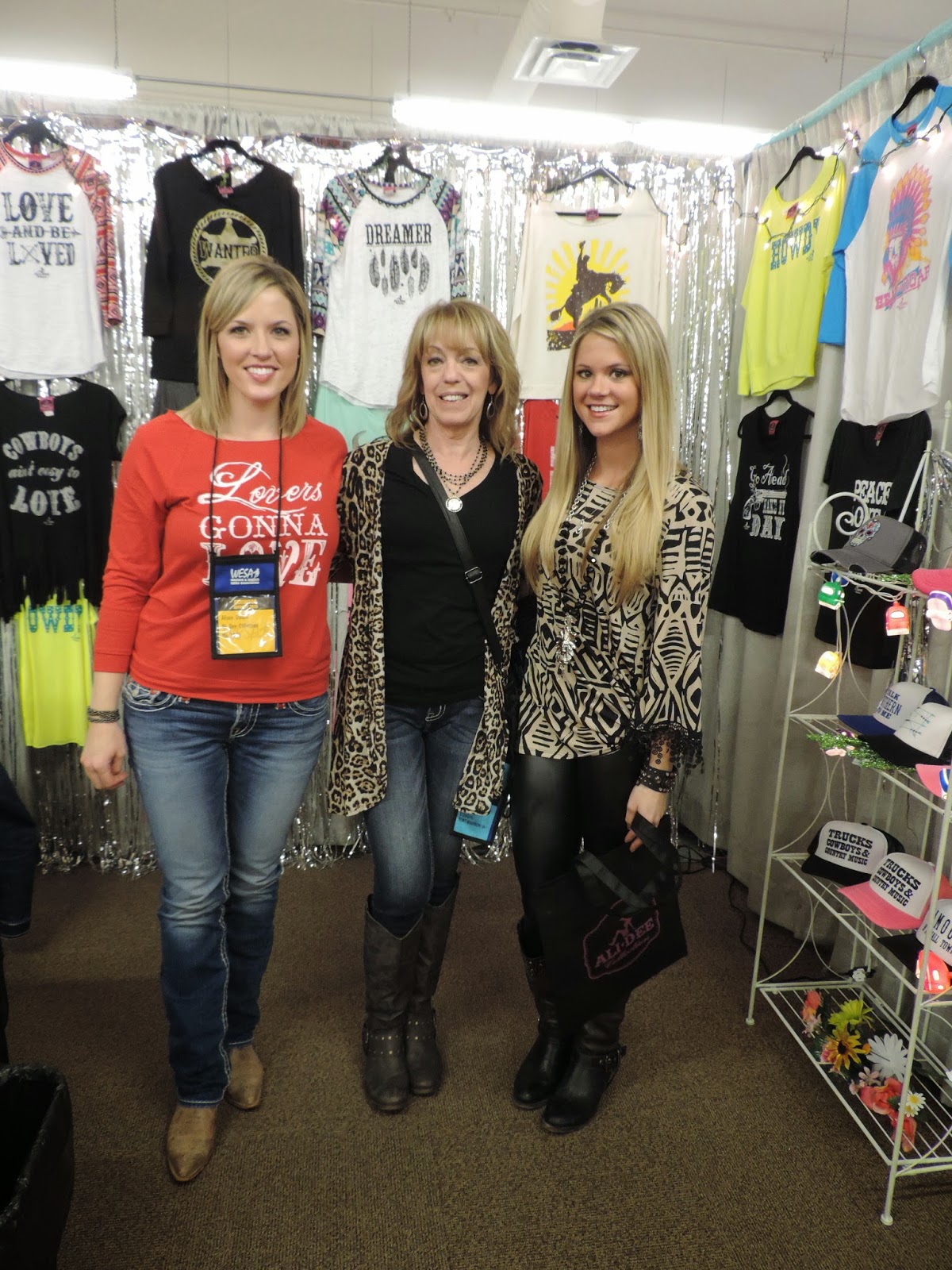 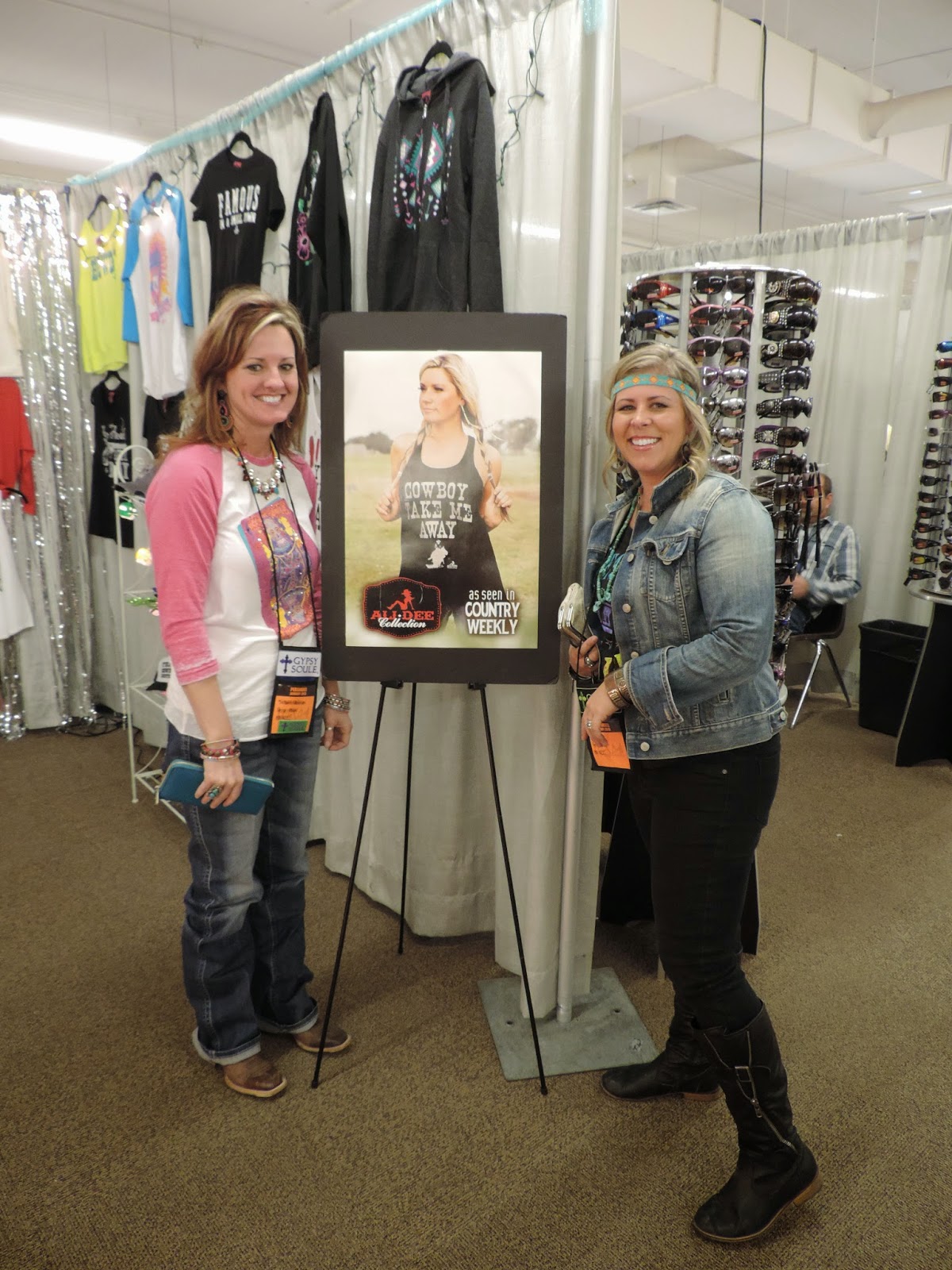 The Gypsy Soule girls stopped by to see Ali Dee, but she was in Tennessee. So what else could I do but snap a picture with the Ali Dee sign? They are the absolute coolest! 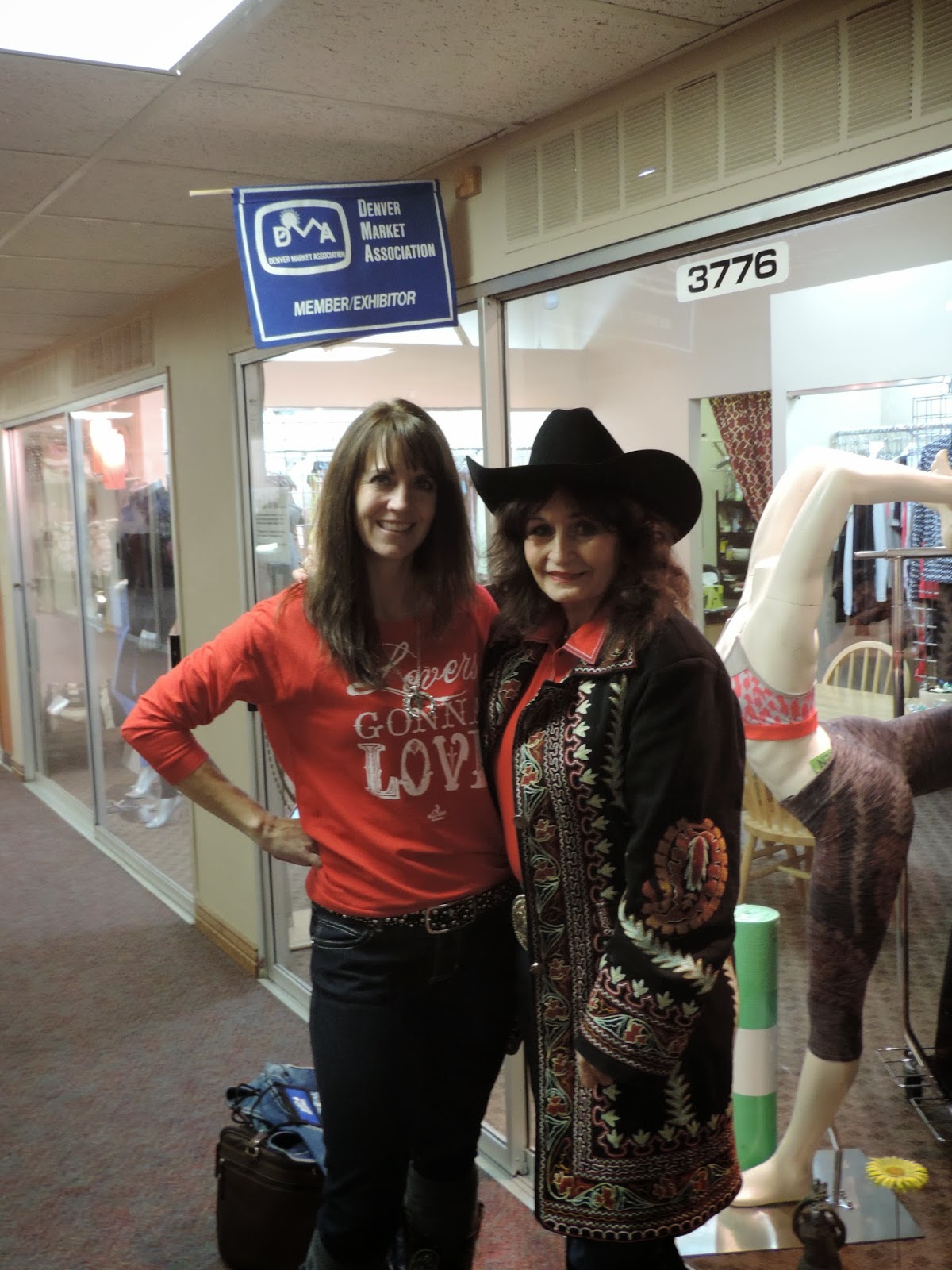 As I was walking down the hall one evening, there was Martha Josey, a living legend! I said, "Hey Martha Josey!" And she not only said hello, she gave me a big hug and said, "Let me get a picture with you!" Ha! That was a first...! She is the sweetest lady ever and it was an honor to meet her. 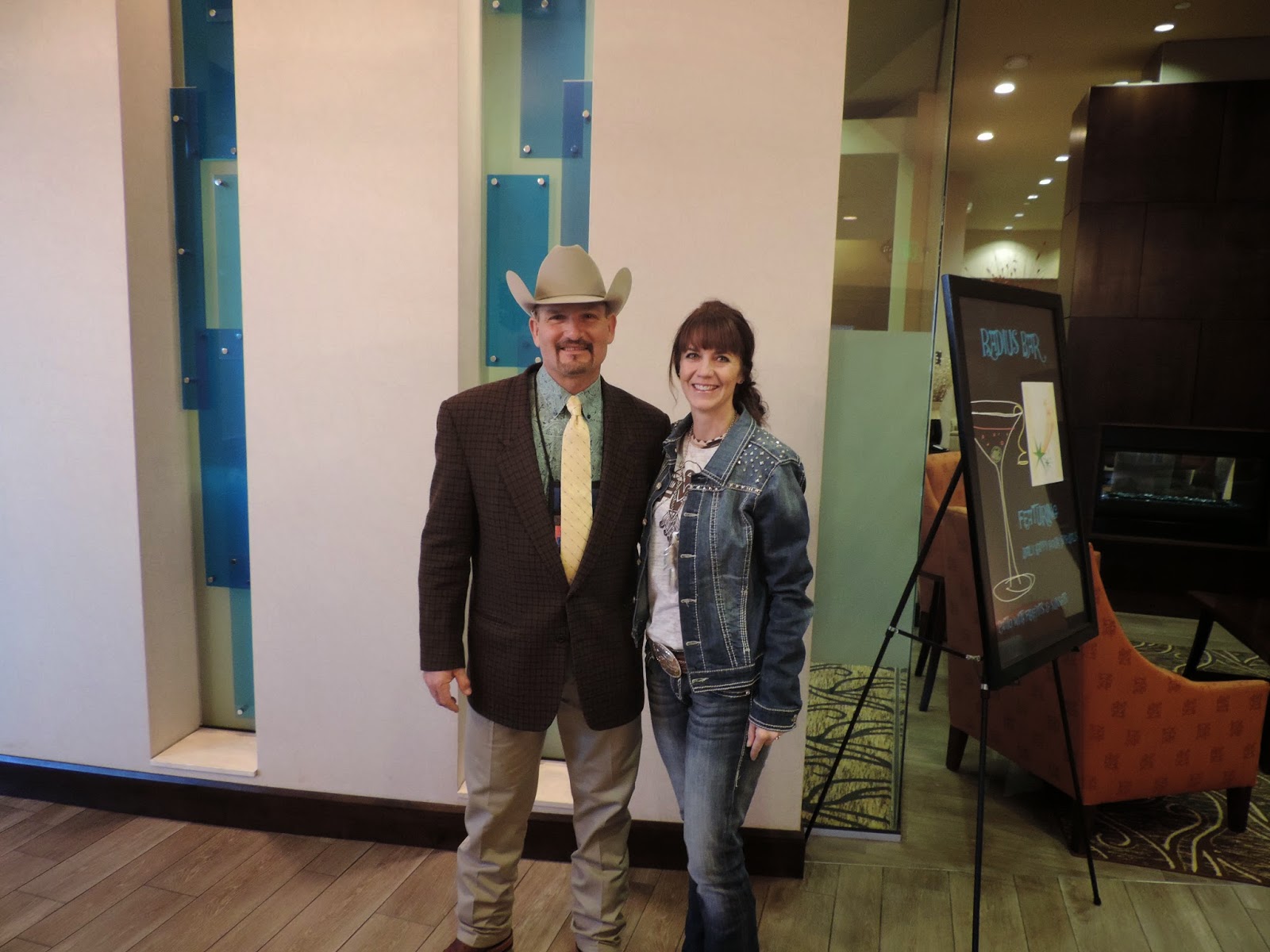 I got to have a photo with two of Montana's super stars after breakfast at the hotel on my last day. Above, Scott, who I think looks like John Rich, and below, Jake, who was sweeter than sugar to me. Brady works with some really, really nice people! 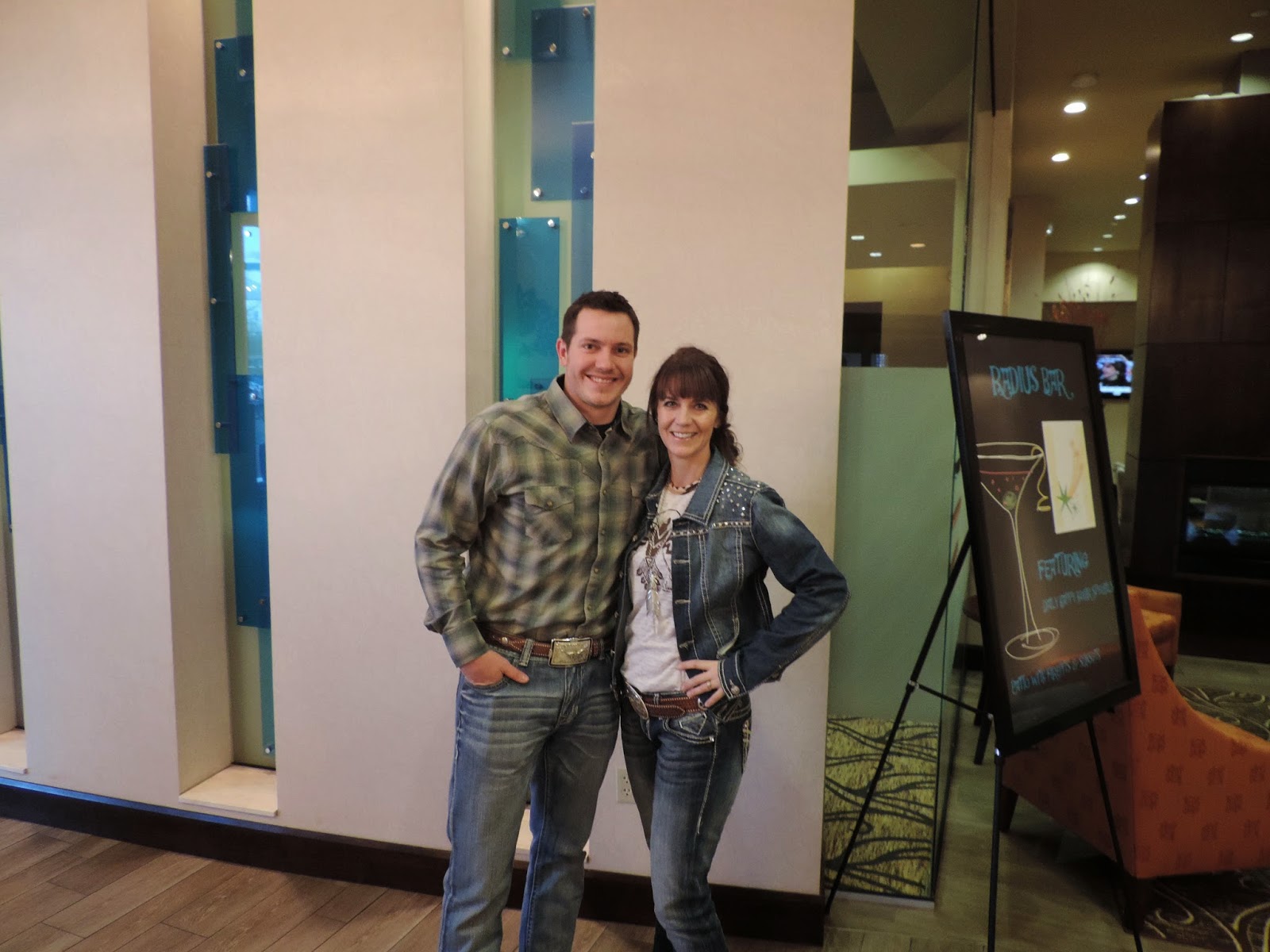 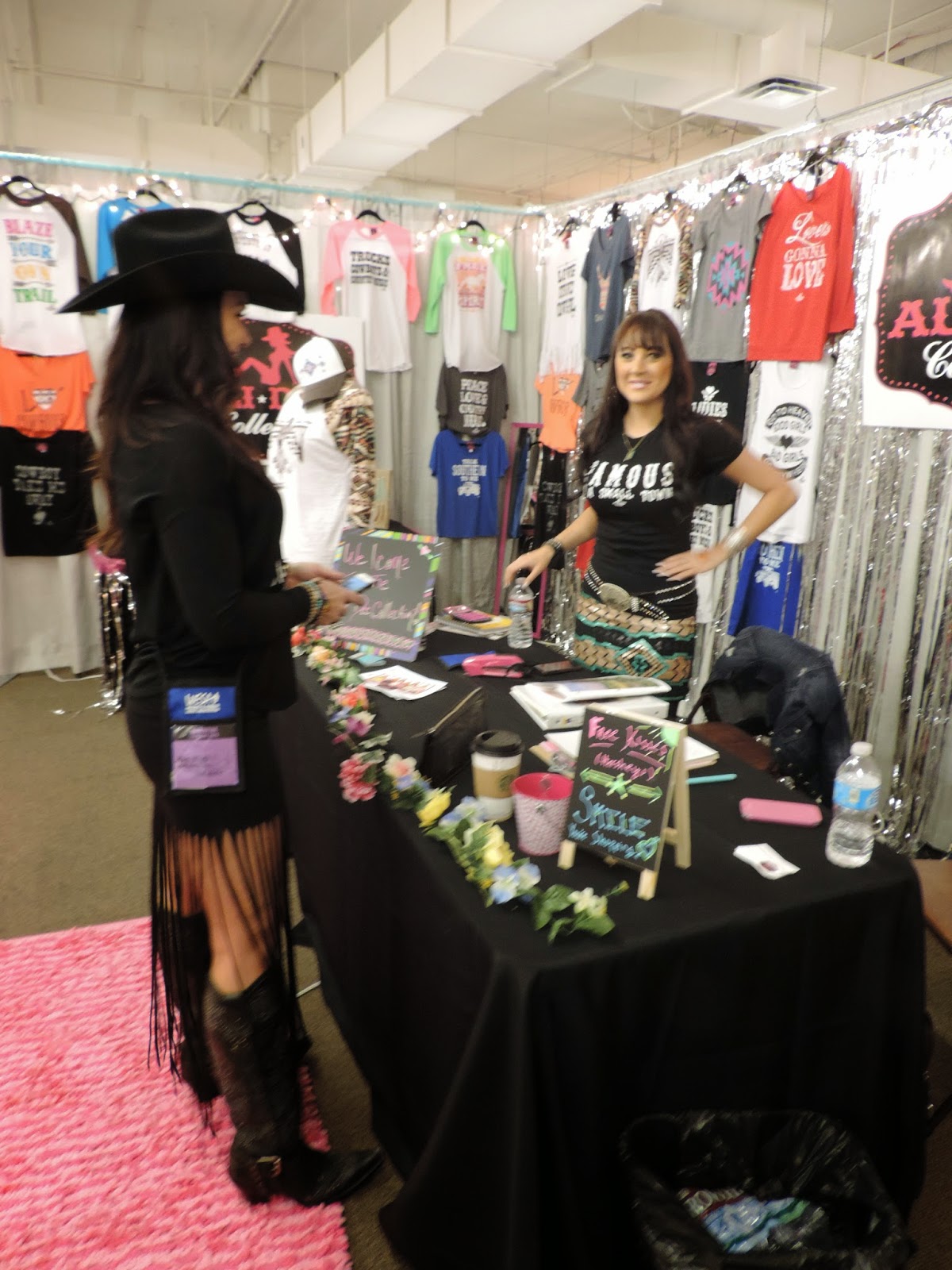 On my last day there, Kaci Riggs stopped by our booth in one of our shirts! It was awesome! She looked amazing, and it was fun to meet her. Too cute! And just for the record, it's true - Ladies Love Outlaws. And then the rhinestone lady stopped by! It was a great day, because we had people from Canada, England and Australia come by, and I said to Devon, "All we need is Germany!" Next thing I know, here comes Germany! True story. I got a lot more pictures on my phone, but I don't have them downloaded to my computer, yet. They are on Instagram and Facebook, though, so you've likely already seen them. I wish I could post them on here, but I think you get the idea. I had a wonderful time working with Devon, and we bonded over our mutual love for WWE - she's a fan, too! It was really fun visiting with her for four days and watching her in action - she is amazing! I was able to hitch a ride to the airport with some Montana folks, most notably David, Montana's jewelry designer who is a REAL ROOOOOOOOOCK STARRRRR! He treated me to coffee and a pretzel and we had a great time visiting while we waited for our flights. I had a perfect flight home - I met the Wrangler Rep on the plane, which was cool, because he lives in Eugene, as well. Once I got home, I was greeted by my precious B's that I had missed so badly, and my Dad, who was still up with them, watching tv. My parents were so sweet to come over from Harney County to take care of my babies and the horses, cats and dog while I was gone. It was such a relief to me knowing everything was in good hands, and everyone had a great time hanging out, making more memories. I didn't get to see my parents for long enough the next morning before they left, but I'll take what I can get - nothing is more important than spending time with the ones you love! And that is what made my trip to Denver all the more special. I got to bond with my Ali Dee Collection team and I got to be with my best friend and enjoy all the accolades and camaraderie of his Montana folks. I felt like part of the Montana Silversmiths family! Denver Market was really, really fun and successful, and I am already looking forward to next year! 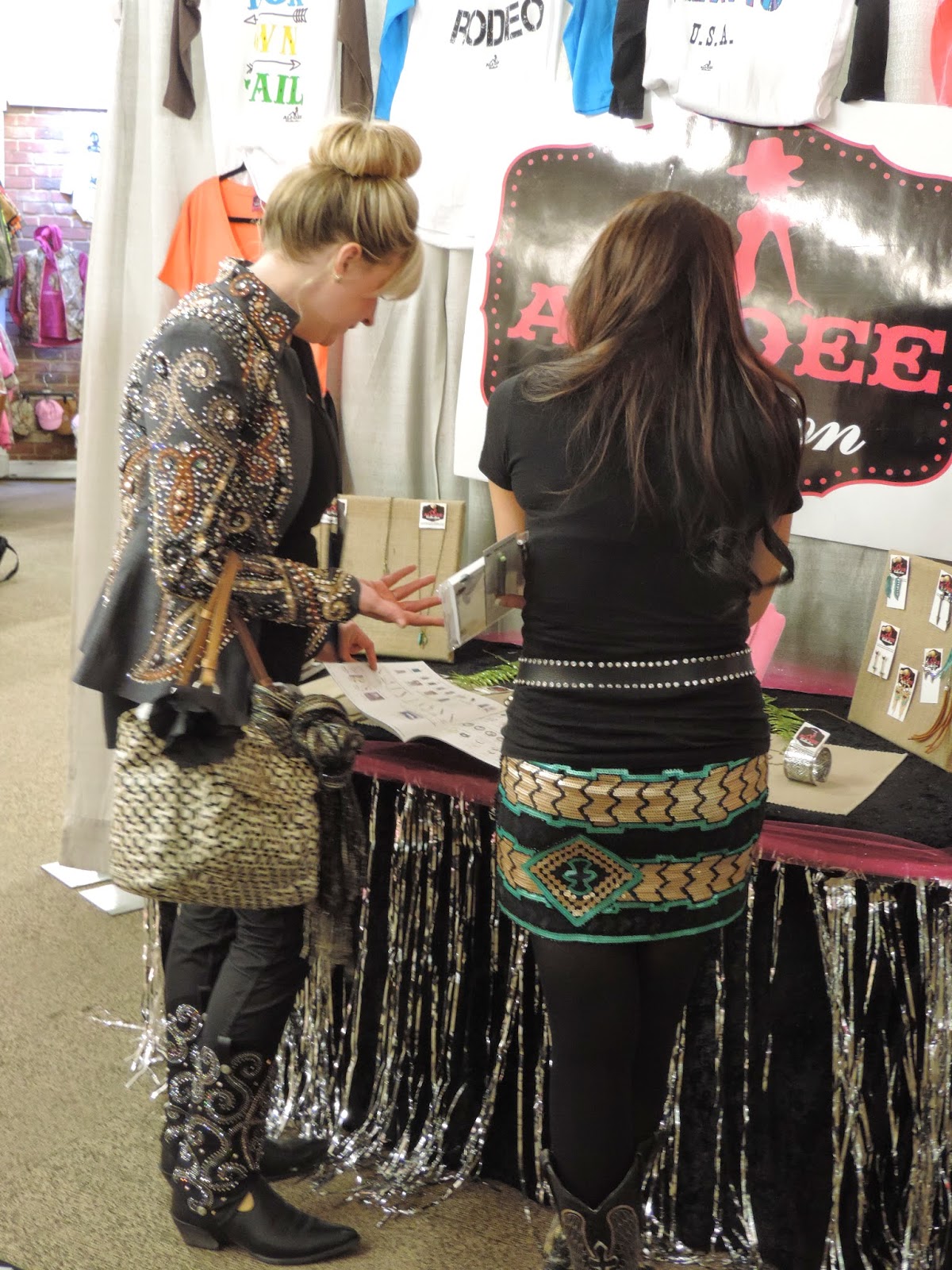