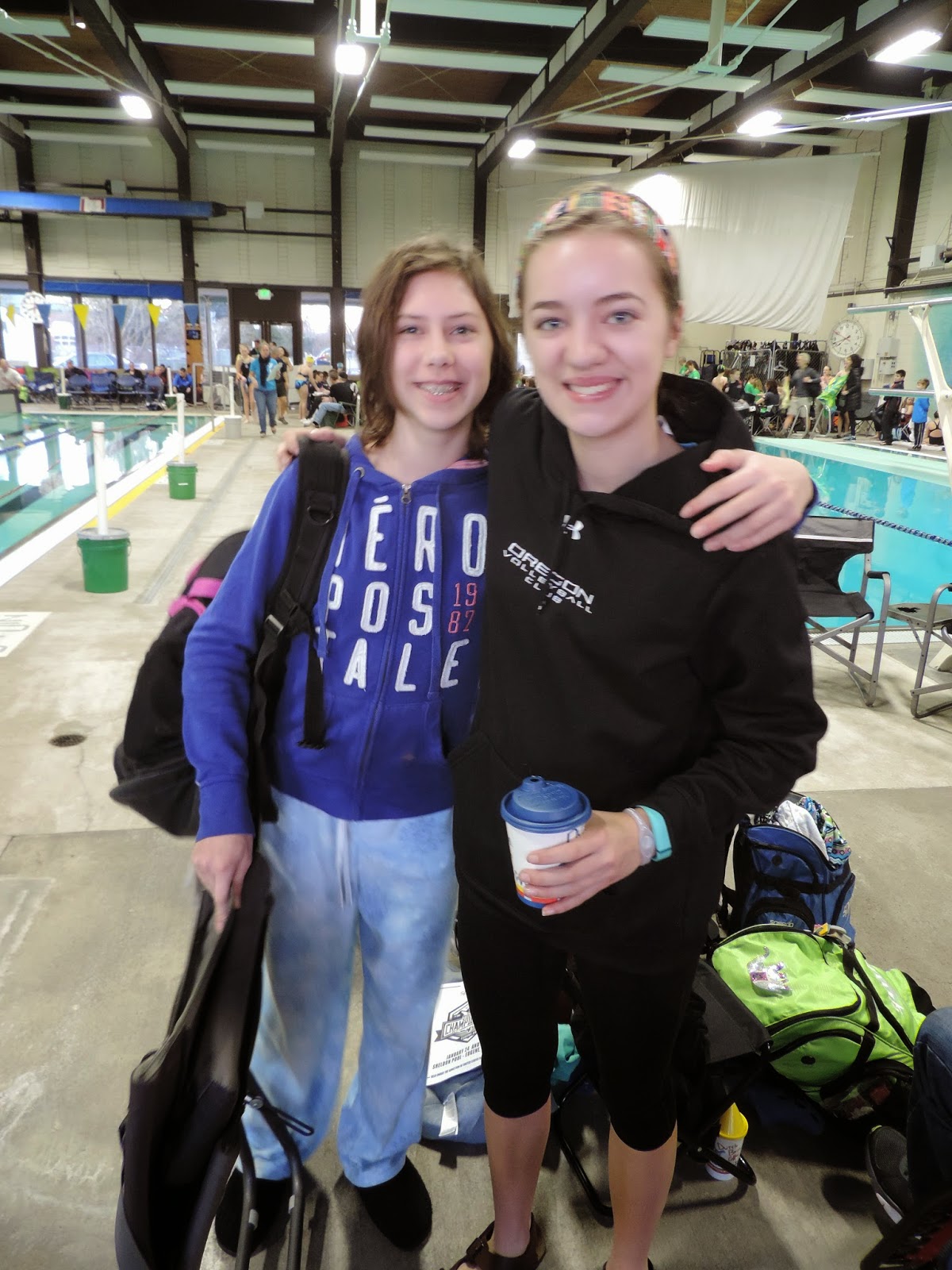 Well, it may have been Britt's Swim Meet, but it was Brailey's as well. She loved every second of this particular meet, because some of her good friends were there. In fact, she didn't want to leave on the first day, because she was having so much fun socializing! Above, she is with one of her really, really good friends, Ellie, who is on TEAM Eugene. Below, she is with another buddy, Sophia, who is also on TEAM Eugene and is a year older than Brai and Ellie. They are all such sweet girls! 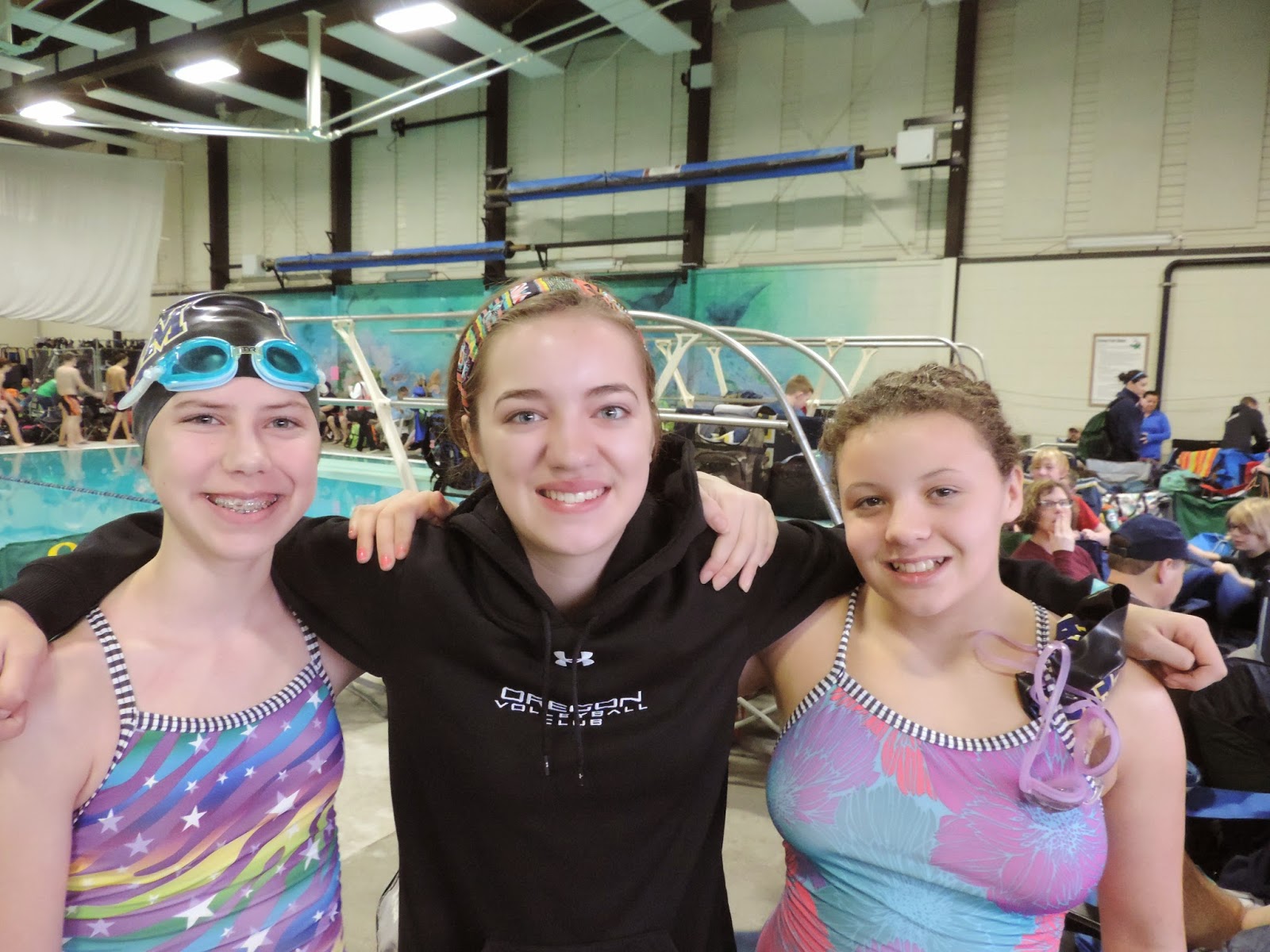 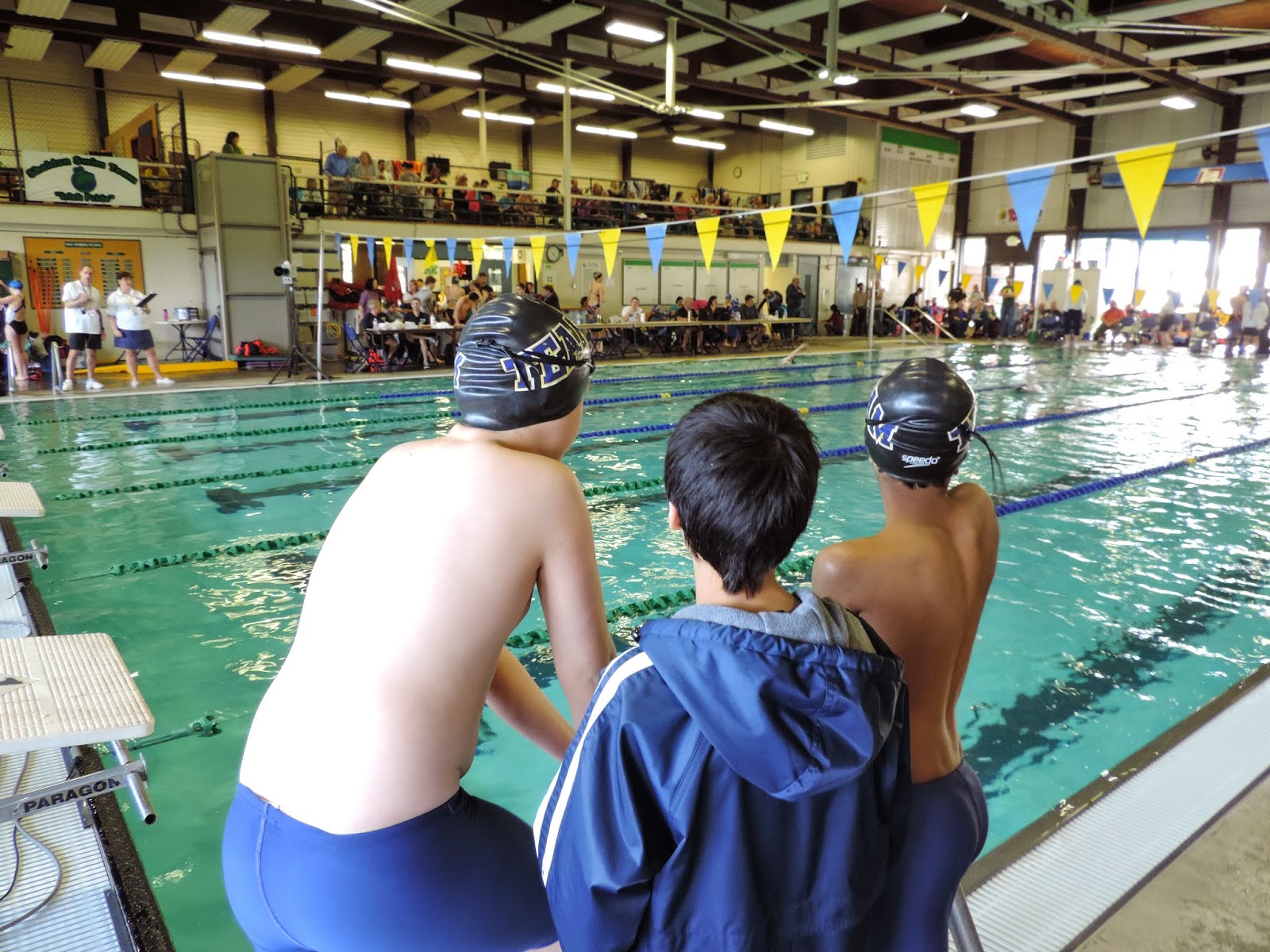 Britt had a great time, as well! He socialized with his buddies, swam some great races and received a ton of compliments on how well he is swimming. He got to be on the "A" team for one relay race, and they won the gold medal! That was super fun and exciting for Britt. His coach told me she is really excited about how he is doing and that he is going to start blooming in the next couple of years. She also praised his work ethic and positive, kind demeanor. As hard as he works and as much as he loves swimming, this was music to Brady's and my ears! 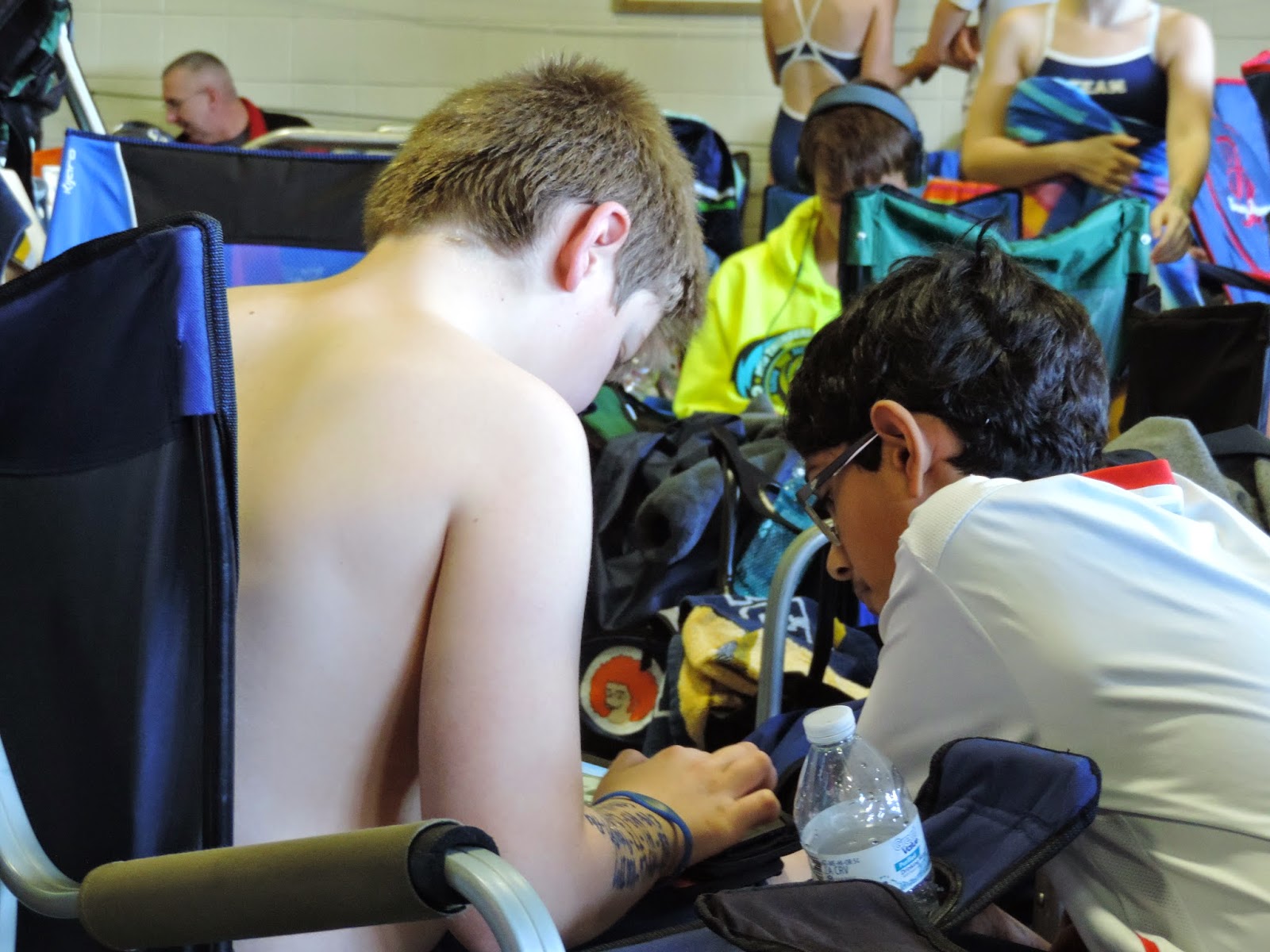 It was a truly gorgeous day on Saturday, and after we got home from the meet, we took a small siesta, cleaned our stalls, did a few chores and then Brailey and Brady went for a little ride. It is time to let her stirrups out again. It was so relaxing and fun to ride on such a beautiful afternoon. It felt like spring! 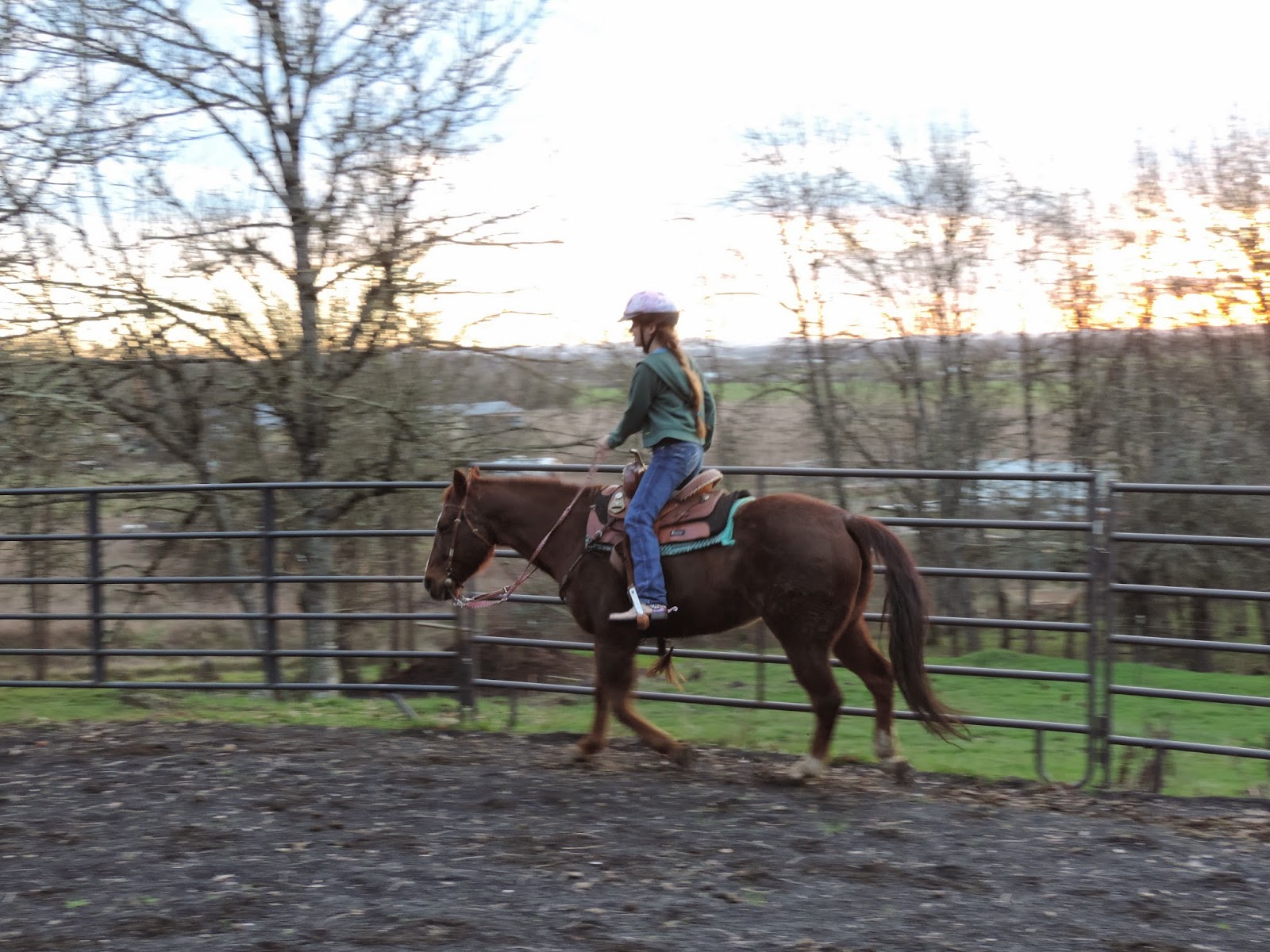 This was the first time Brady has ridden Alvin in years - I think the last time was before Alvin broke his foot. It was also the first time Brady's ridden since we lost his Mag-Doll. It was bittersweet. Alvin is the absolute kindest horse on the planet and has a heart of gold, but he's a fire ball, too. I even rode him for a bit. Alvin takes good care of all of us. 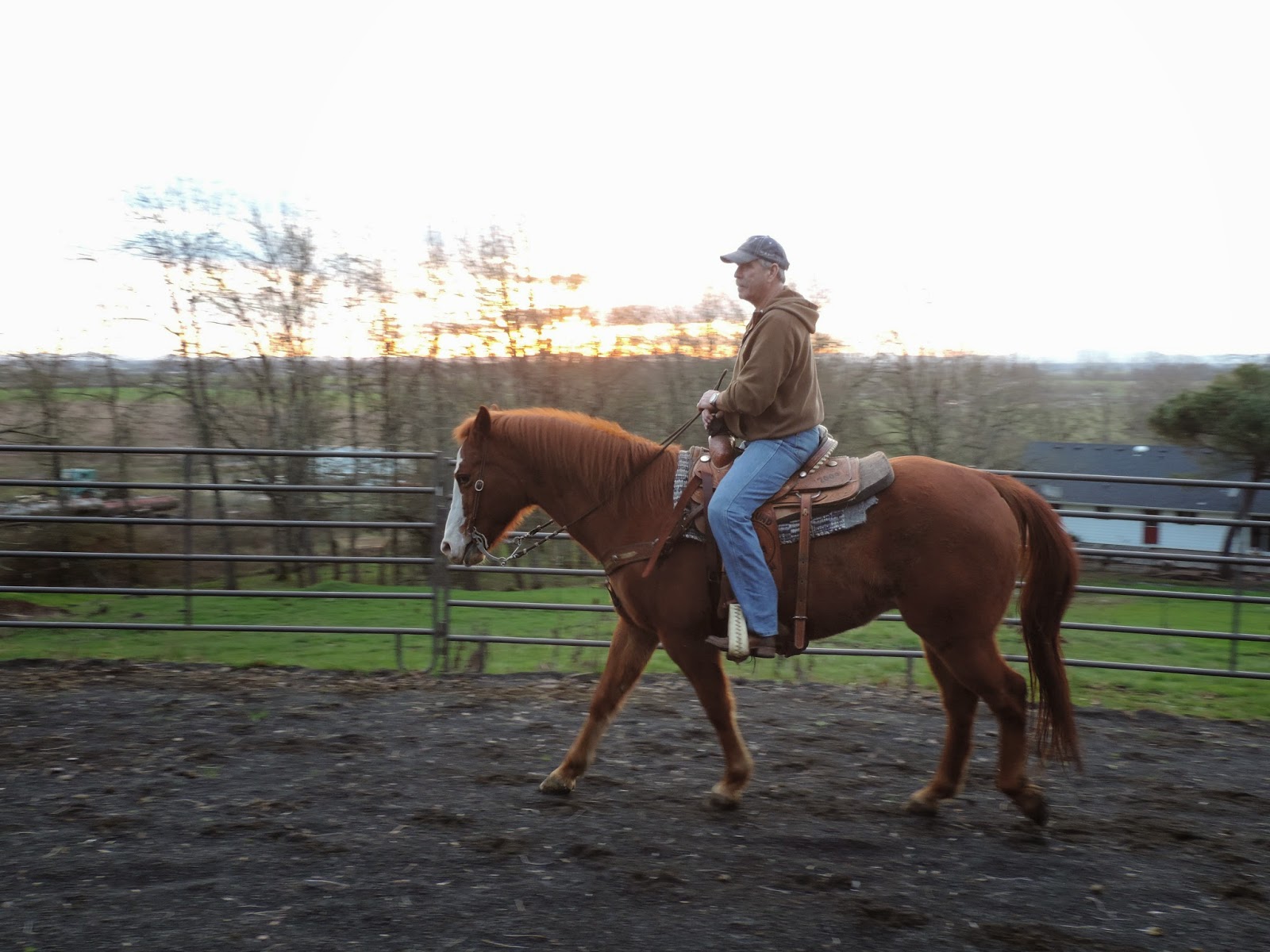 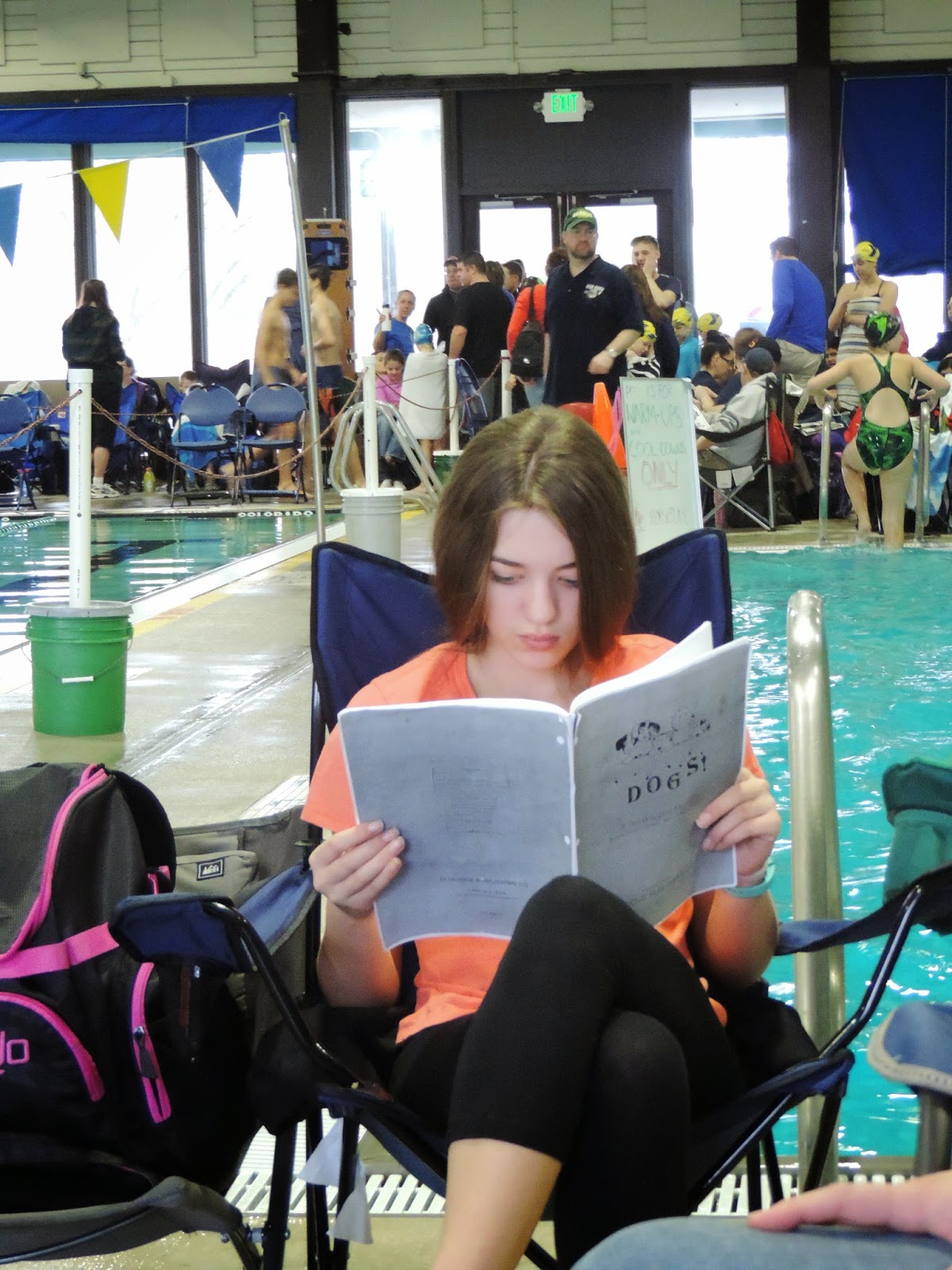 And then the next day, there we were, back at the pool, bright and early. Brailey is going to try out for the school play again, and so is her friend Ellie. So while Ellie was warming up, Brailey studied the script (even though she has the entire thing memorized already!). She and Ellie spent a lot of time reading parts together. Below, she and Brady watching the action. 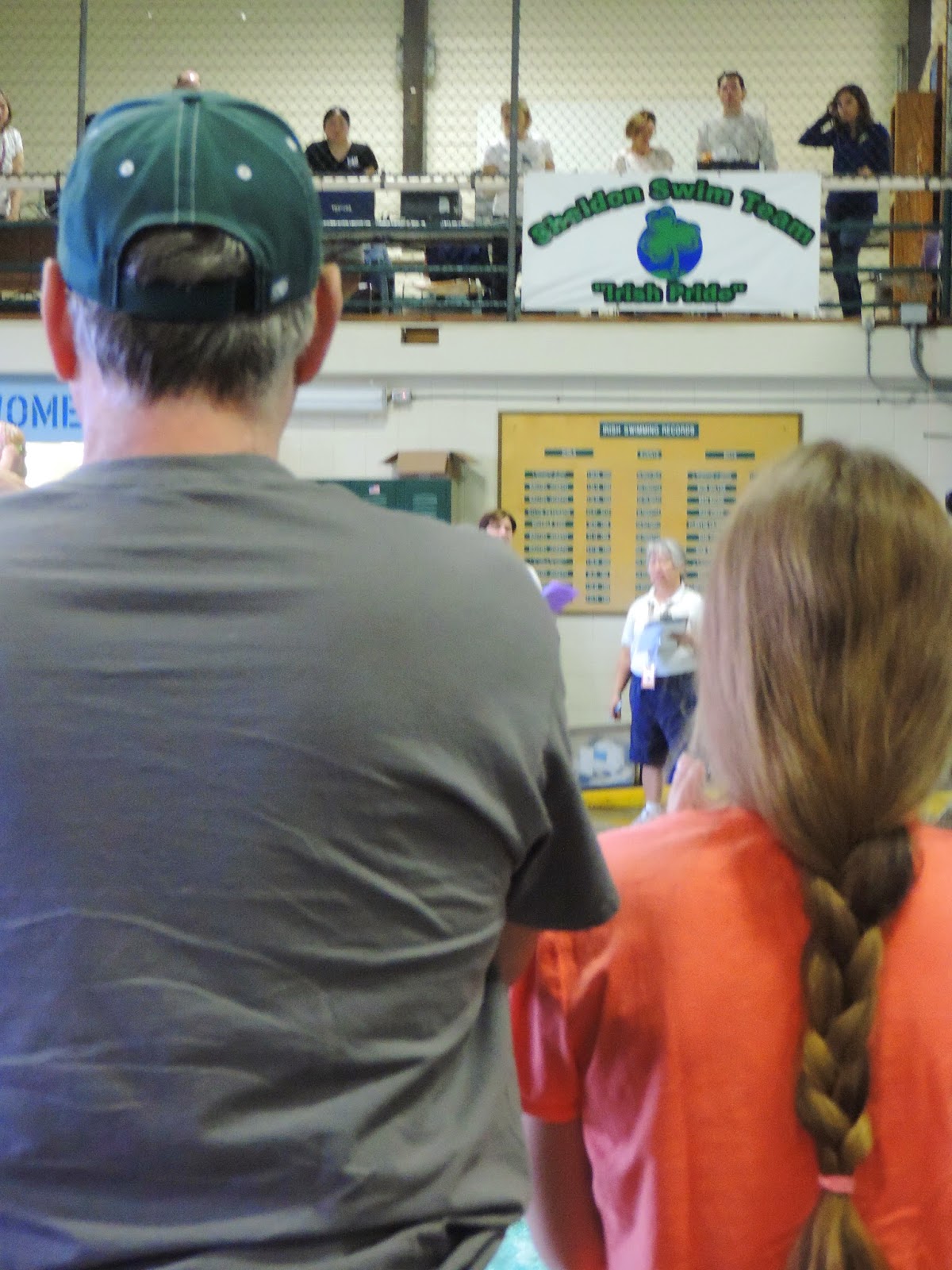 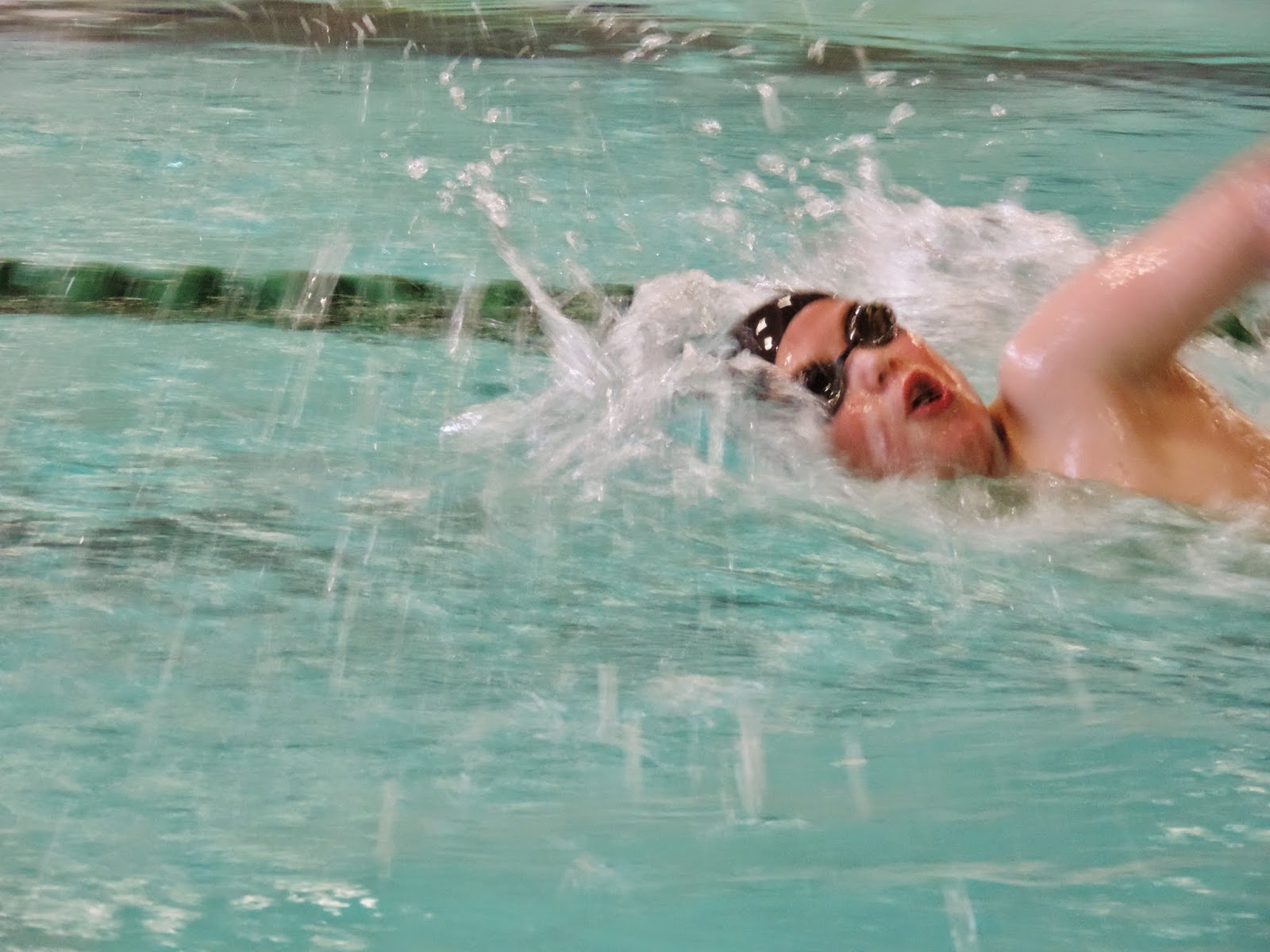 And then, another one of Brailey's friends showed up, who also has a sibling on TEAM Eugene. Rachel and Brai were on the same Kidsports volleyball team this fall (remember The Dream Team?), and they had a big time catching up with one another. They chatted and laughed and cheered their siblings on - it was adorable to watch them, because they enjoy each other's company so much. 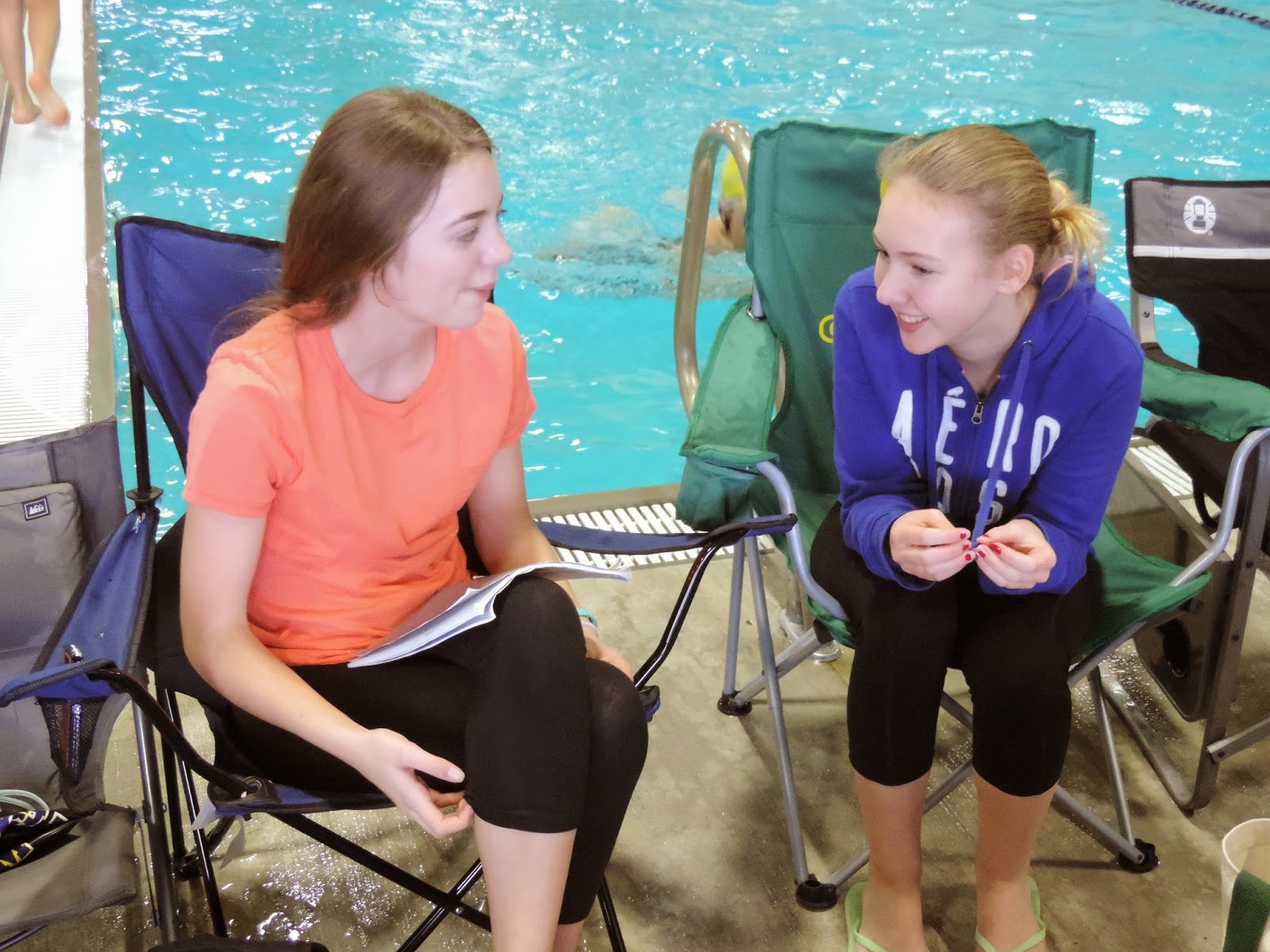 But then, someone accidentally elbowed poor Brai right below her eye! It was swollen, so we got some ice. Thankfully, it is fine and was just a weensy puffy on Monday. Poor girl! 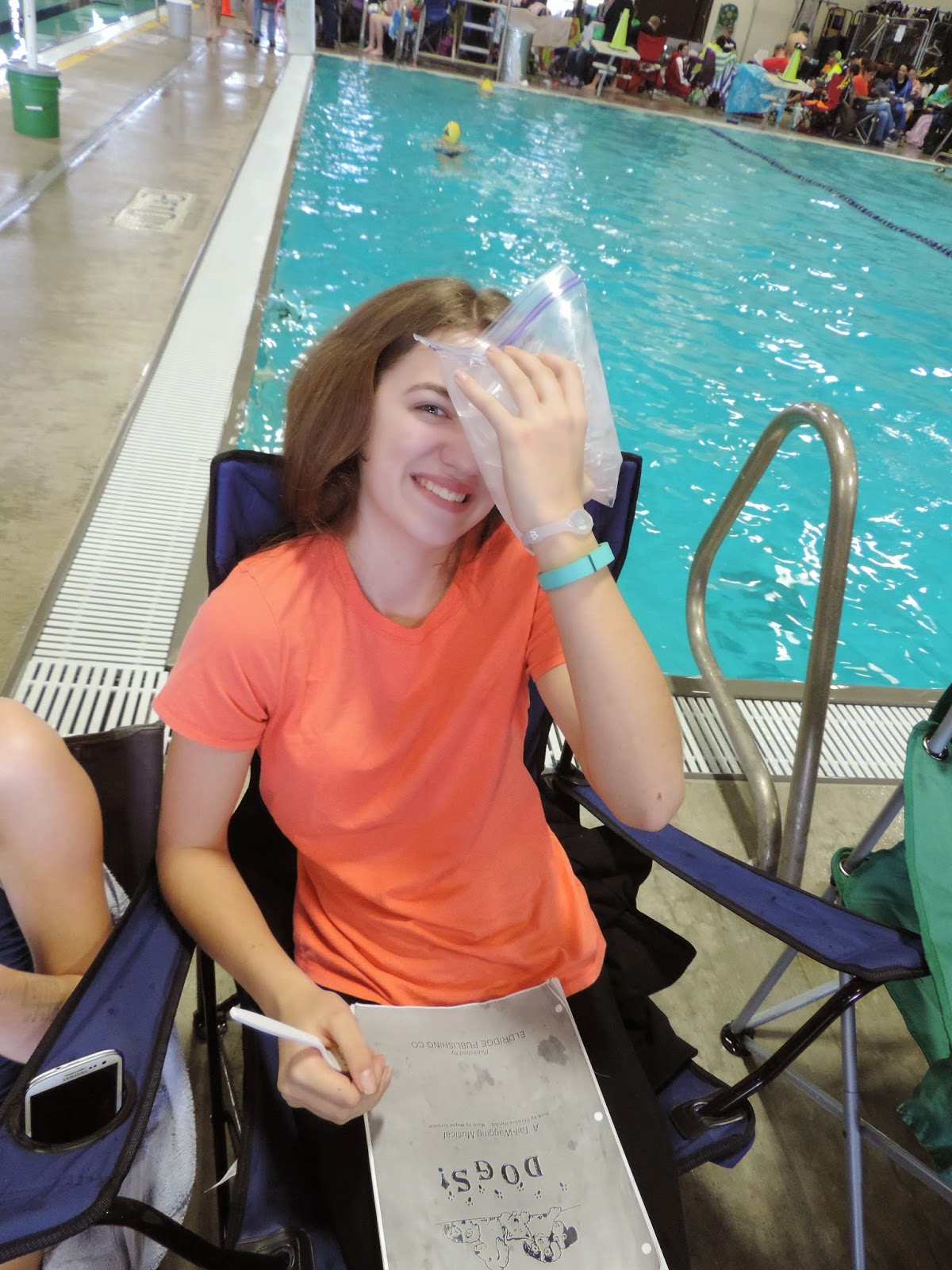 The two amigos... They are in a group of four girls at school that are inseparable. It was really nice for them to be able to just hang out all day in between races. 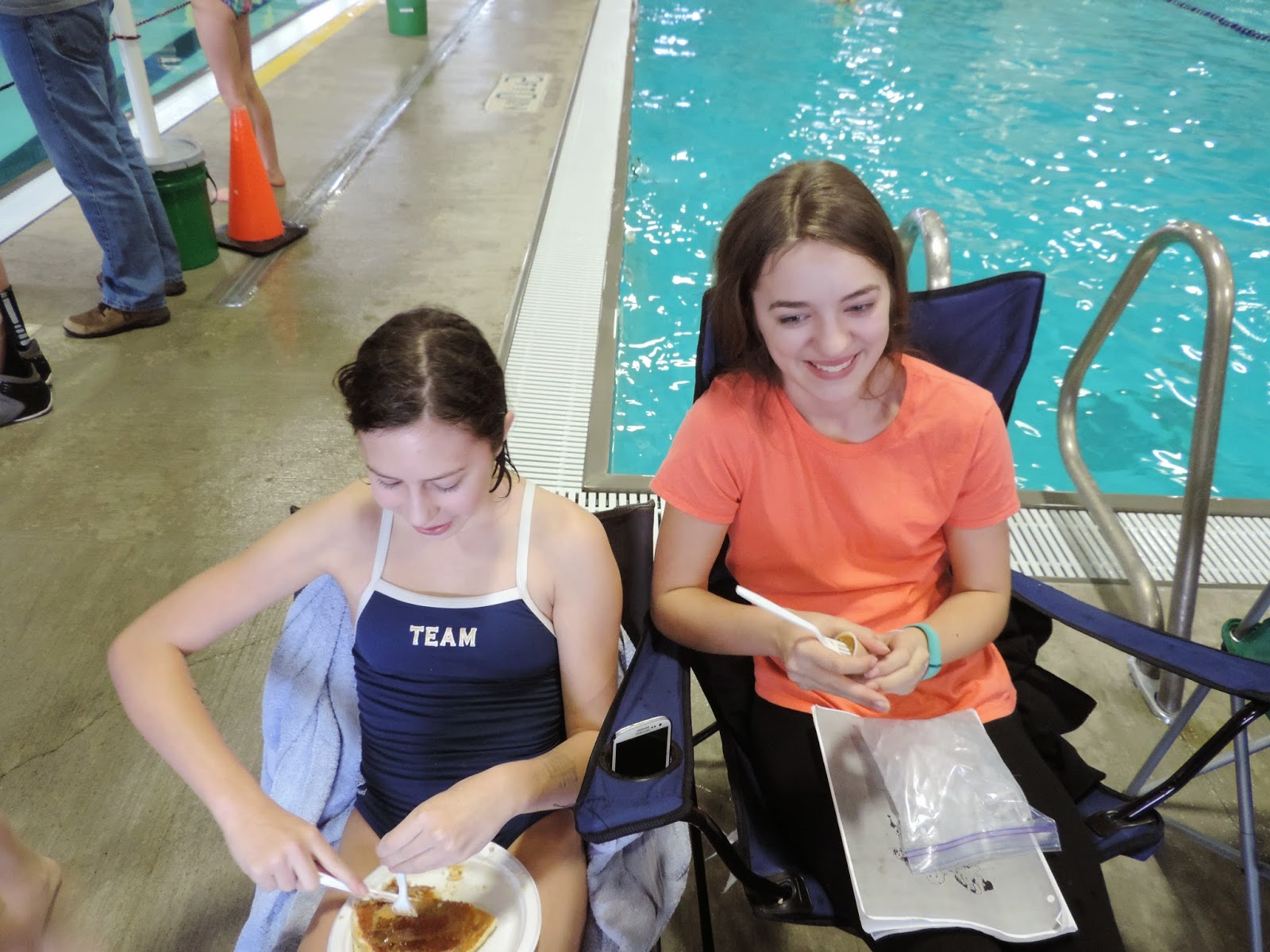 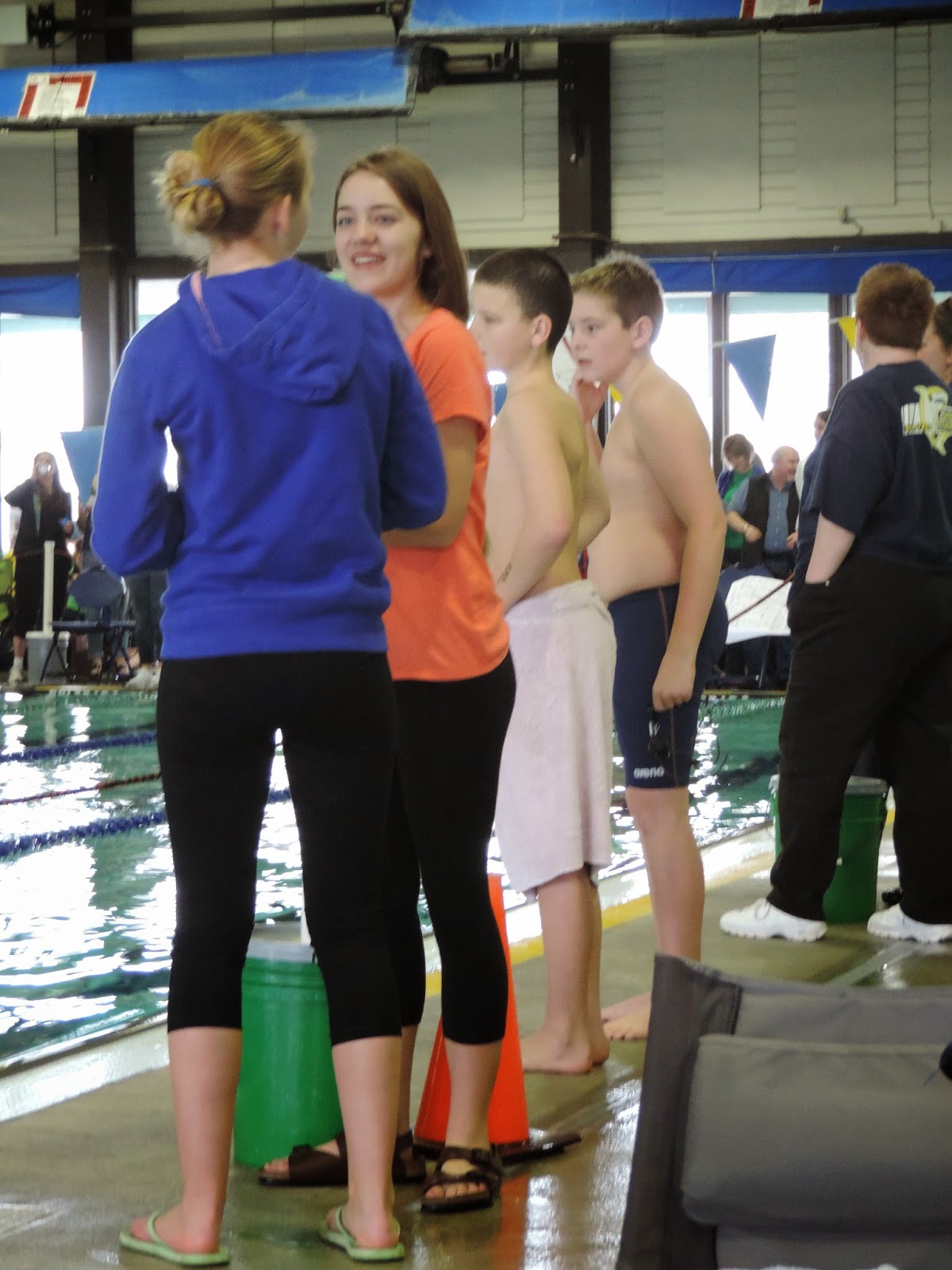 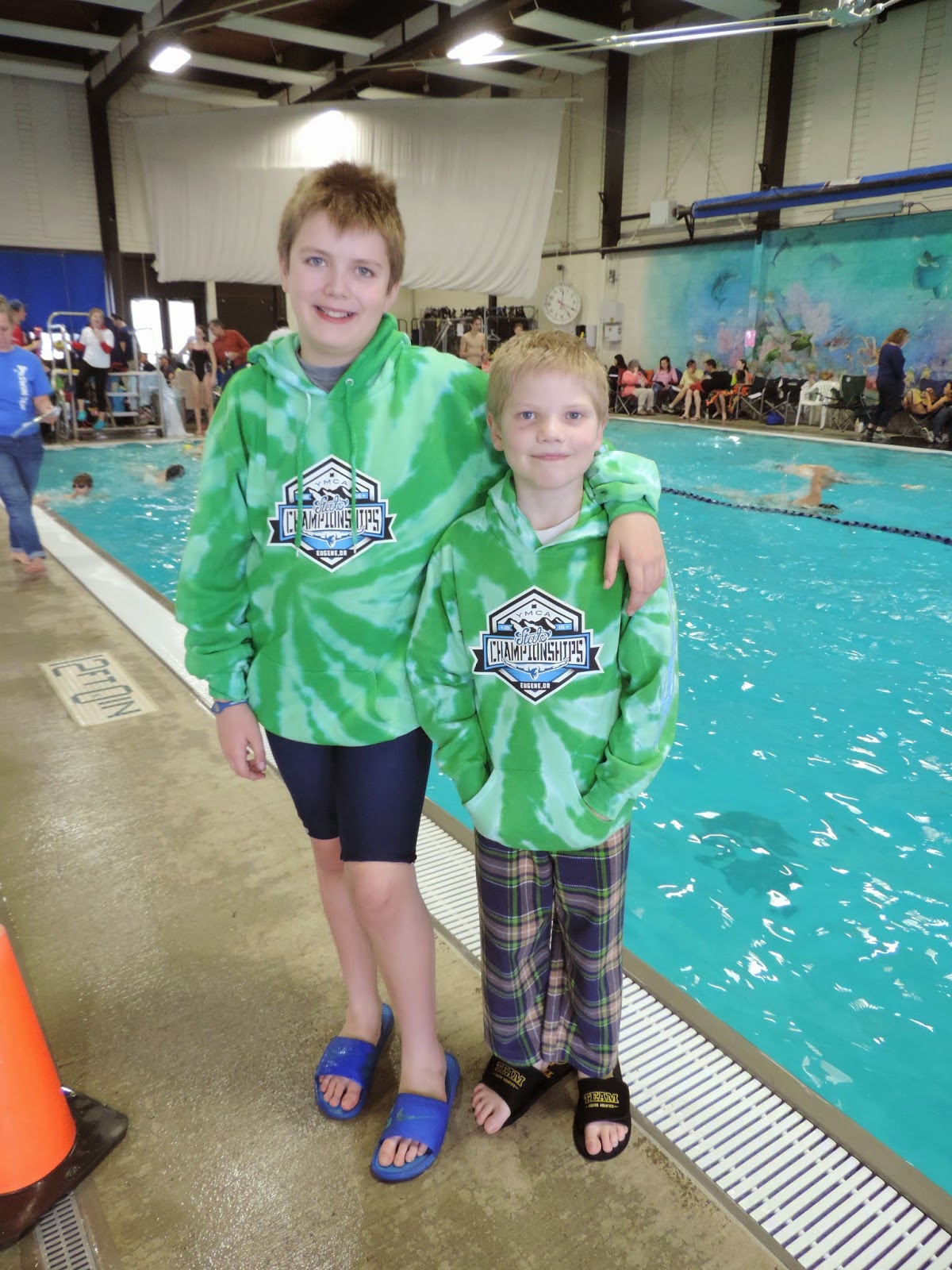 Britt and his buddy Bryce and their matching sweatshirts. Bryce is quite the designer! He got his made right before Britt, and he added quite a few things onto it - the front wasn't enough. I couldn't figure out why Britt needed artwork added to the sleeves and his name on the back, too. Once I "got it," I was happy to accommodate. They turned out so cute, didn't they? Bryce is a fun kid, and he and Britt have a big time hanging out together. He is only a year younger than Britt, believe it or not. Mutt and Jeff, right? And who says boys don't care about fashion? 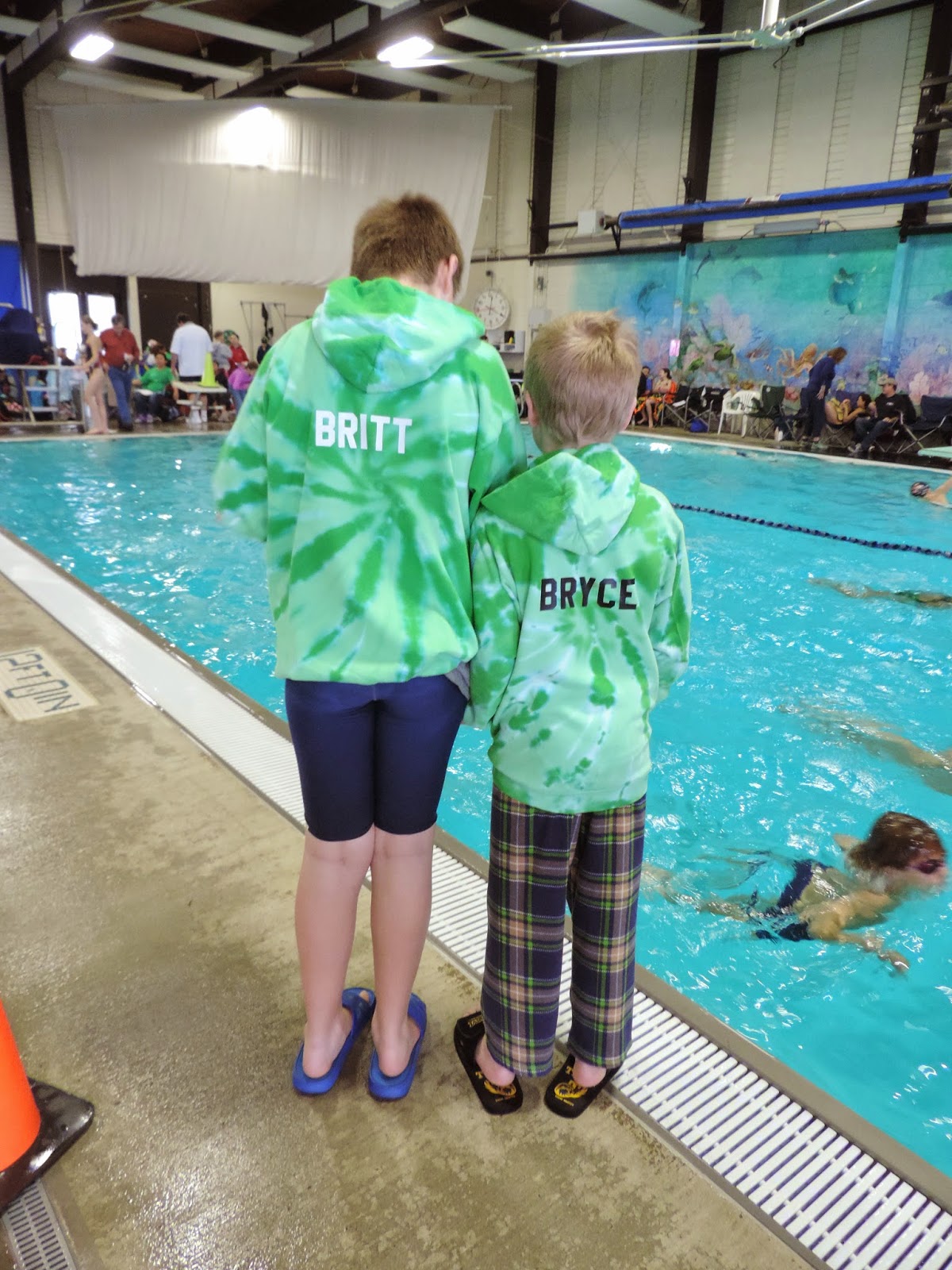 Just before his last race of the meet. I was thrilled to catch this good luck hug! 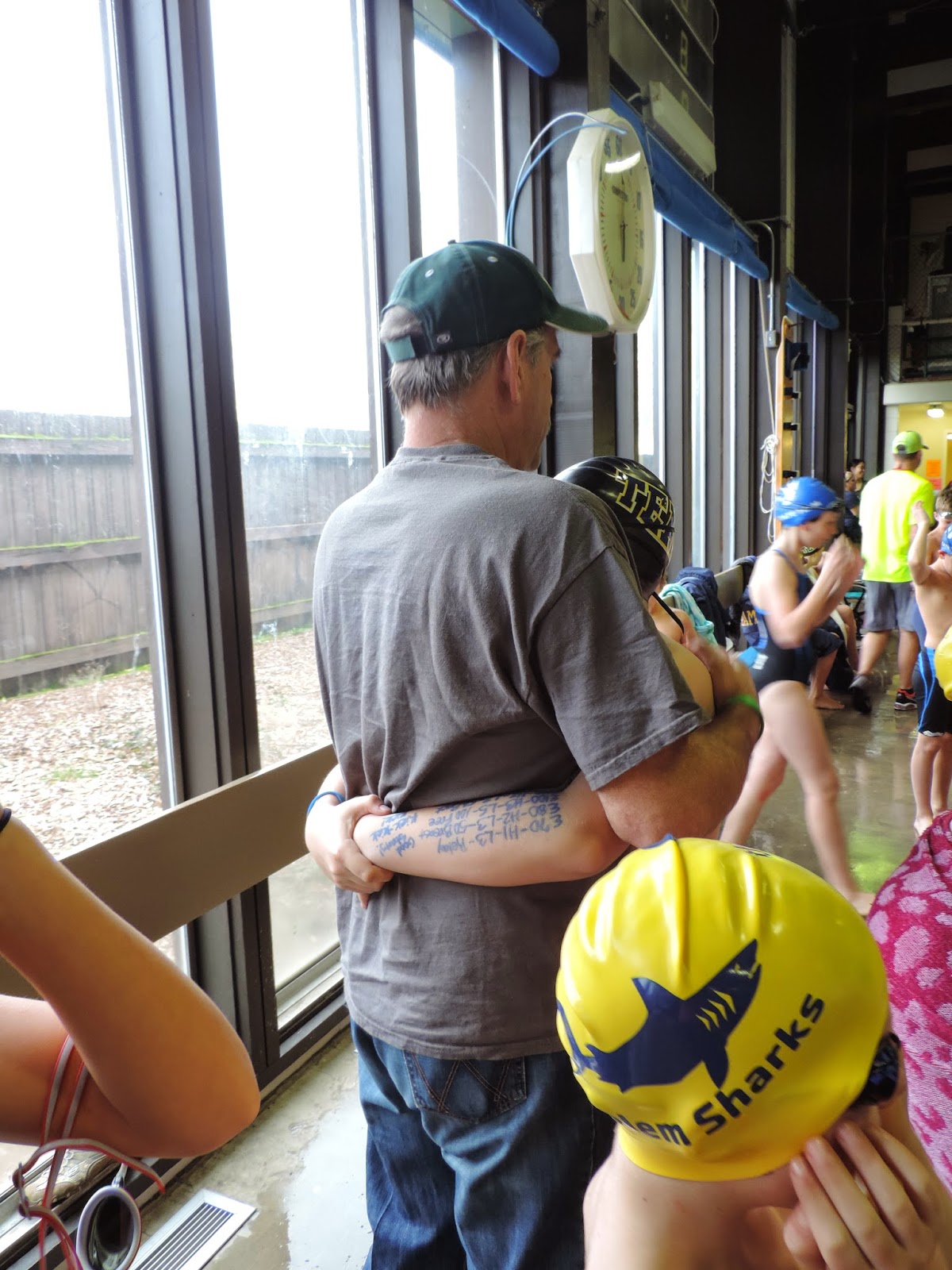 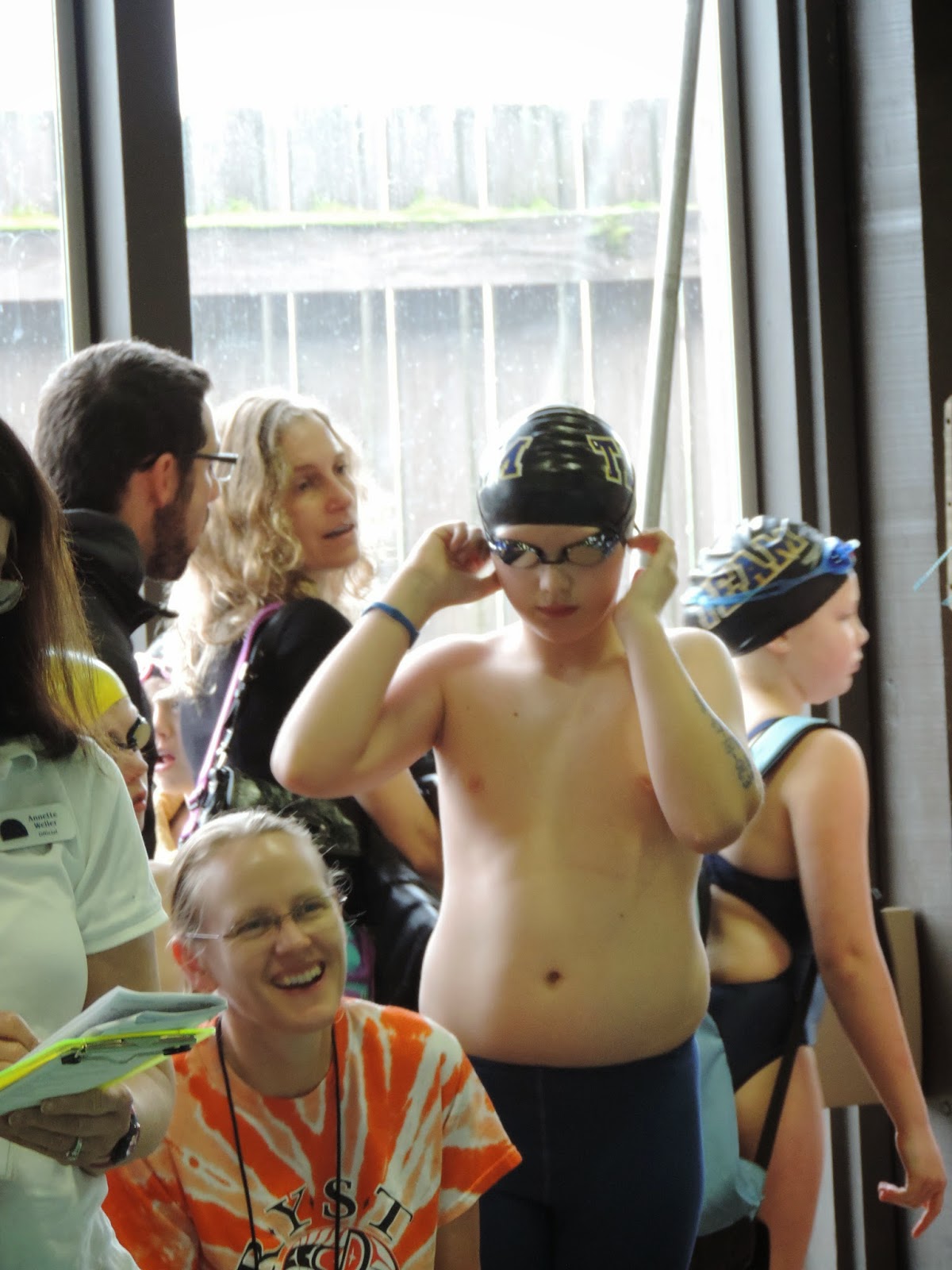 Anyway, another swim meet in the books. Britt swam really well, considering his practice schedule has been a bit off, lately, due to Brady's and my travel. He swam against kids who swim 2-3 times more a week than he does, and held his own, so we are excited to see how he does once he starts practicing more. His strokes look excellent, so he has a good foundation to build on. We love the way he loves to swim - his passion for the sport makes all the time and money worth every second and cent! GO BRITTSTER MAN! 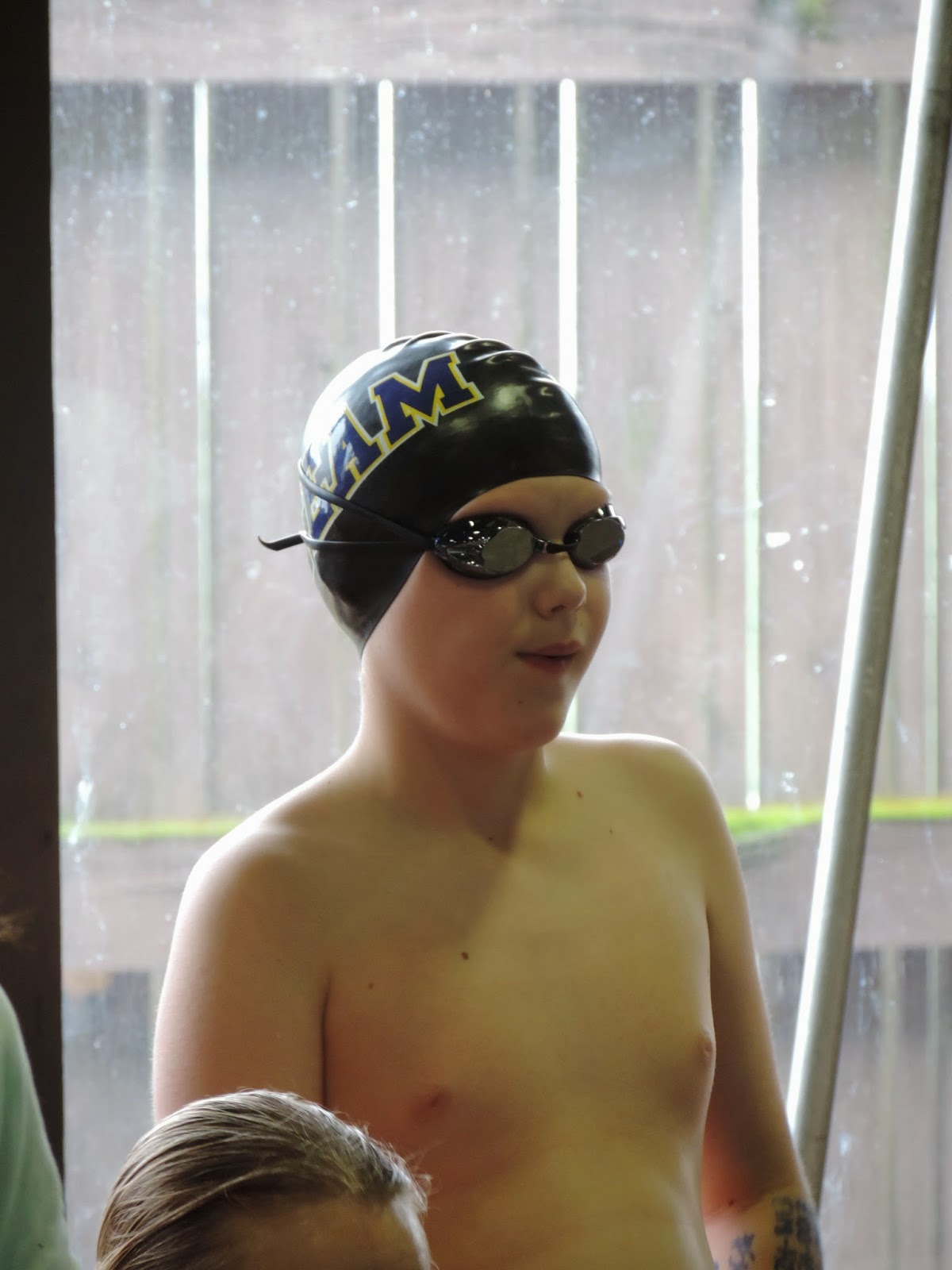