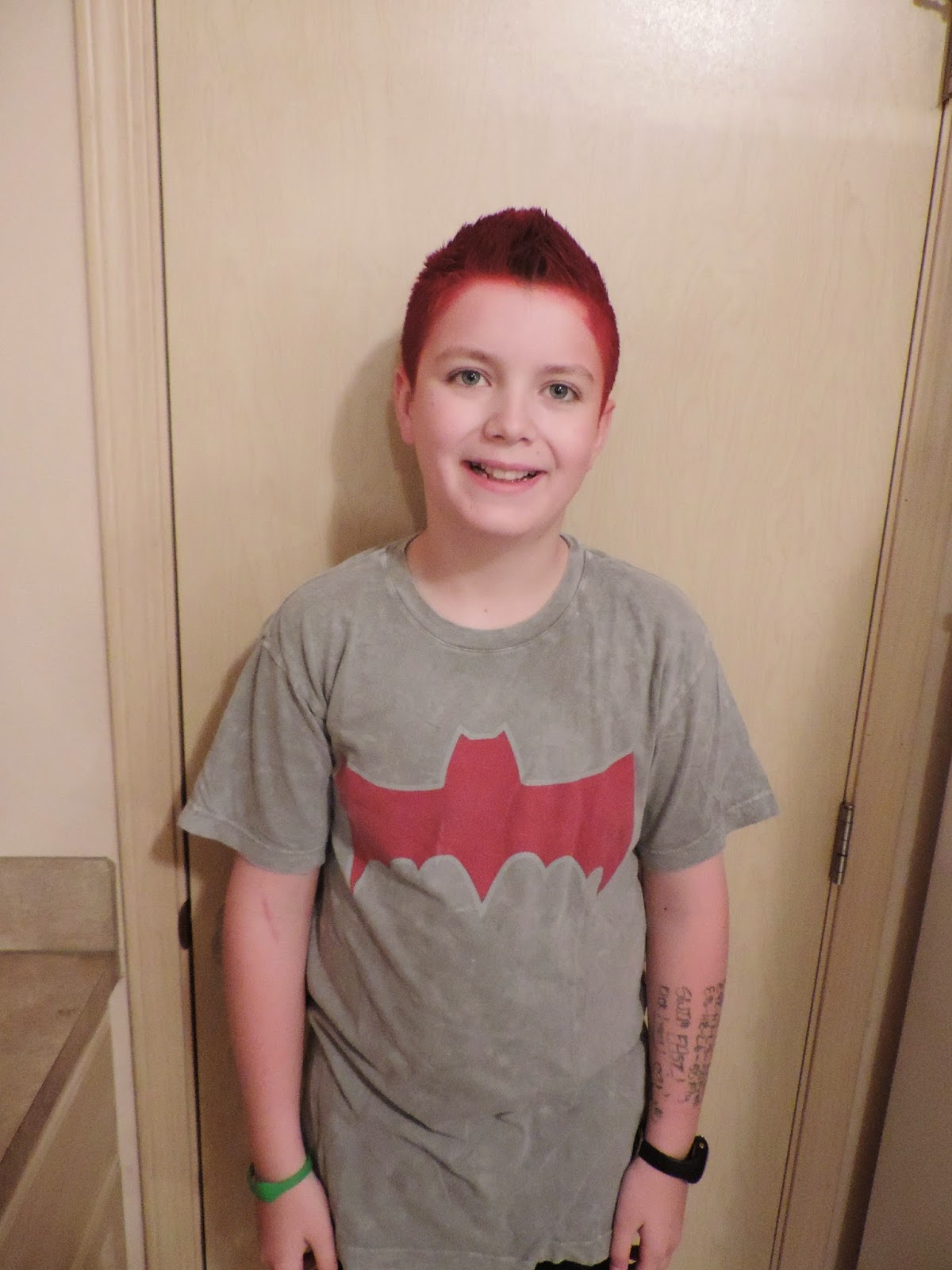 Britt had a great week last week! The very best part is that it was only a four days long! But the fact that is was School Spirit Week and Last Day Fun Day at Splash for his swim team made it even better. I'm so glad he isn't too cool to participate. He is such a fun kid! We are still trying to get the red off his scalp. But he was a very handsome red head, that's for sure! In WWE speak, "All red everything!" 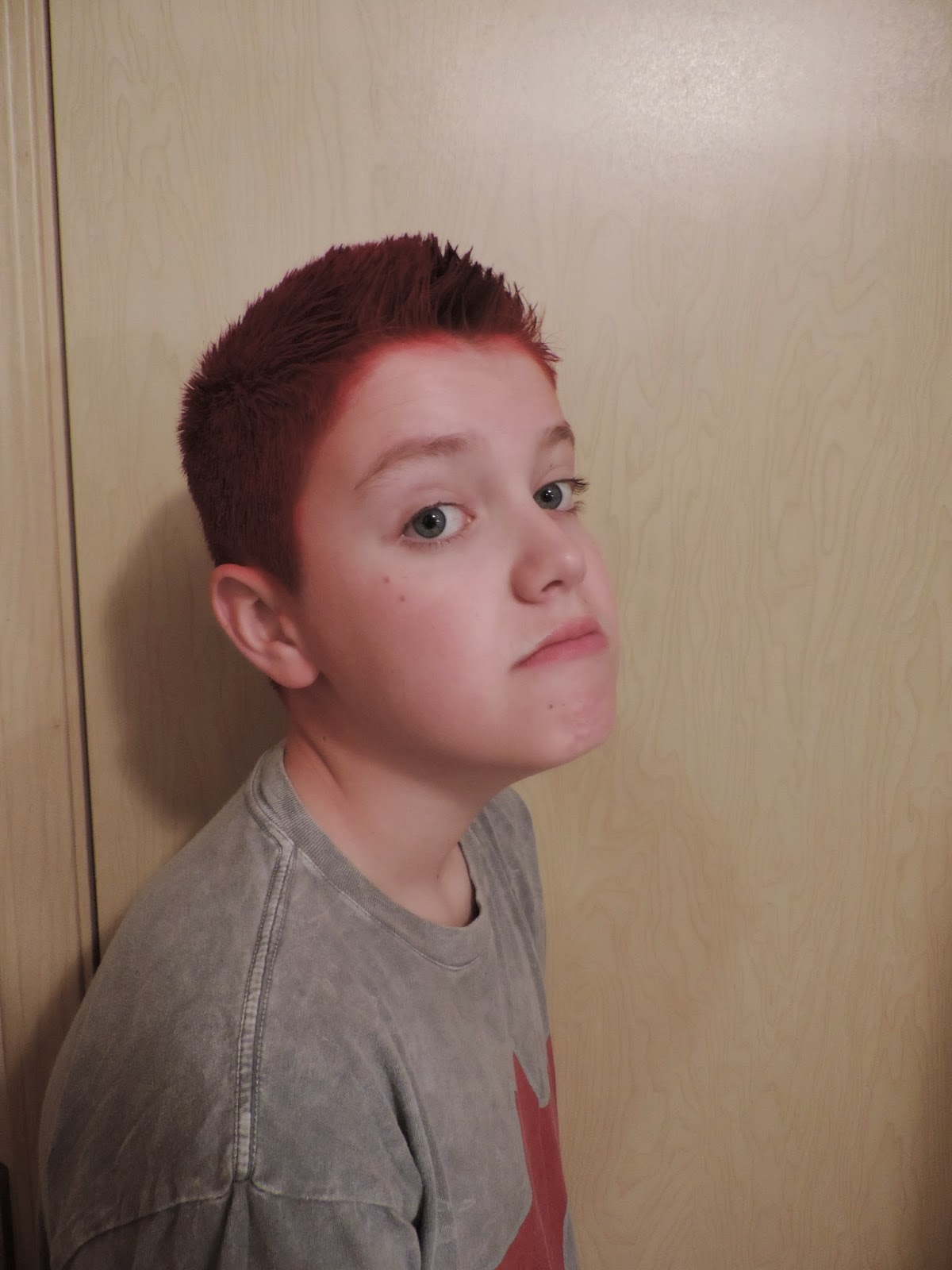 As you may have guessed, Monday was Crazy Hair Day. 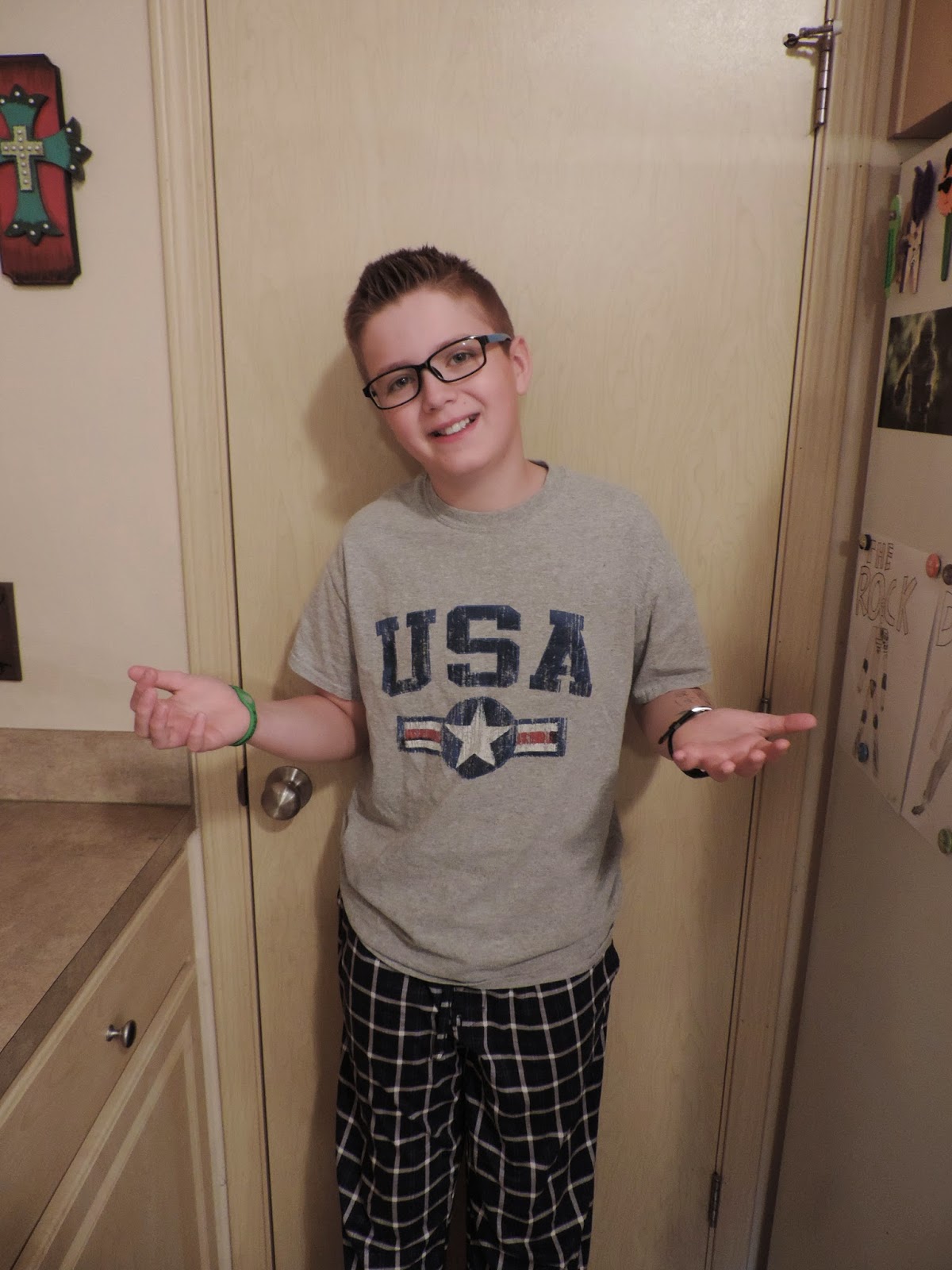 Tuesday was Pajama Day. He actually didn't want to participate in this. He didn't think any of his friends would wear their pajamas to school, but I told him high school boys wear their pajamas to school, and I've seen many high school boys on the swim team wear them instead of sweats. Yet I left the final decision up to him (hard for me to do, if you know me at all!), and he made the right choice! And he was really glad he decided to be a "team player." I shared with him how proud I was of him for thinking it through and making a good choice to be an example and to participate in the fun. 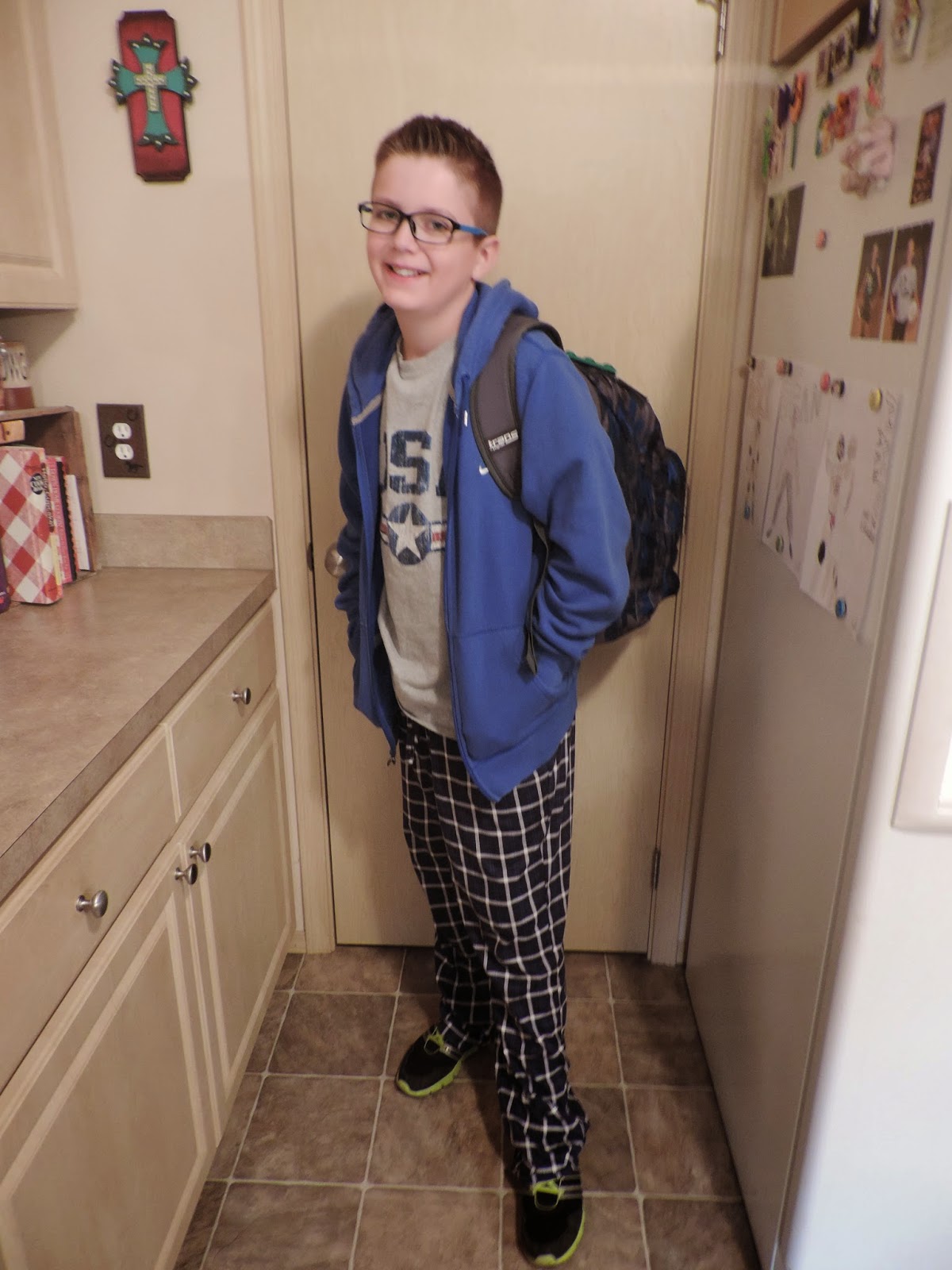 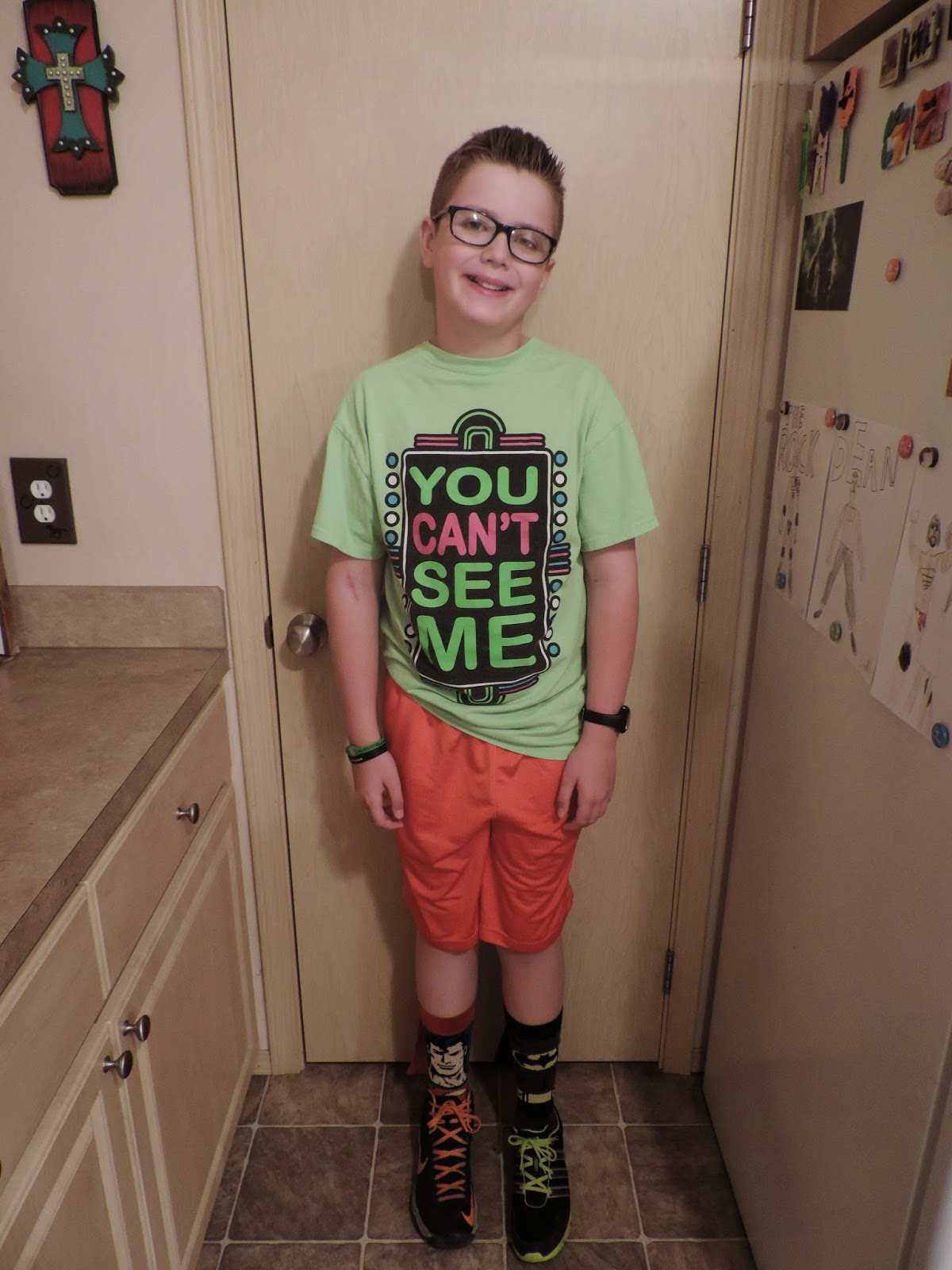 Wednesday, Mix-n-Match Day.  This was probably his favorite day! He picked two different socks, both with capes, which added a certain flair, two different shoes, shorts and a shirt that didn't match at all, his shirt on backwards, and then his spare pair of glasses with two different earpieces. Ironically, when I had one of the broken earpieces replaced on these glasses, he swore he would never wear them, not even in an emergency, because they were embarrassing. However, for Mix-n-Match Day, they were perfect. And then he was a bit shocked that nobody even noticed the different earpieces. So now he wants to wear them all the time! That's my boy...! 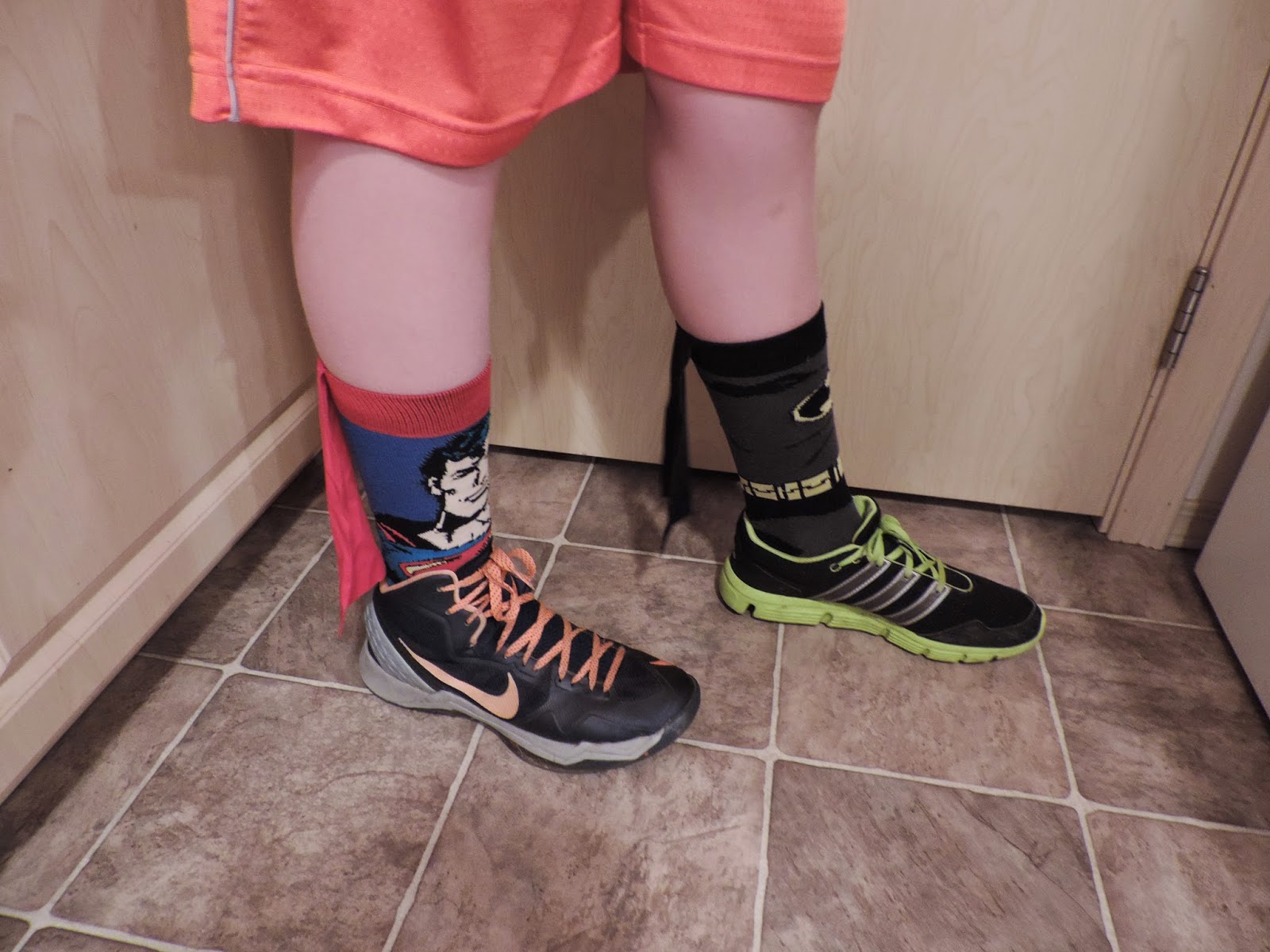 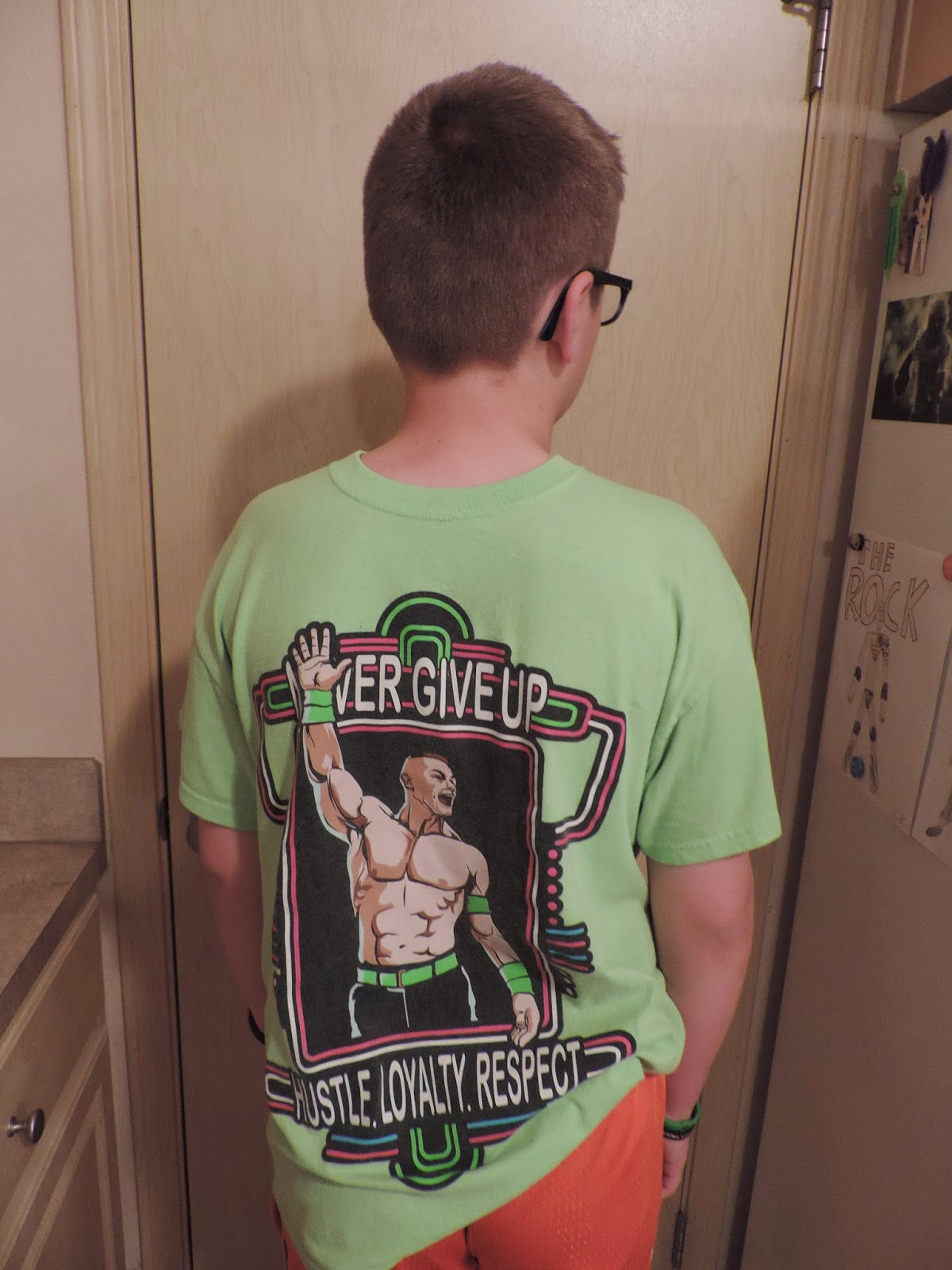 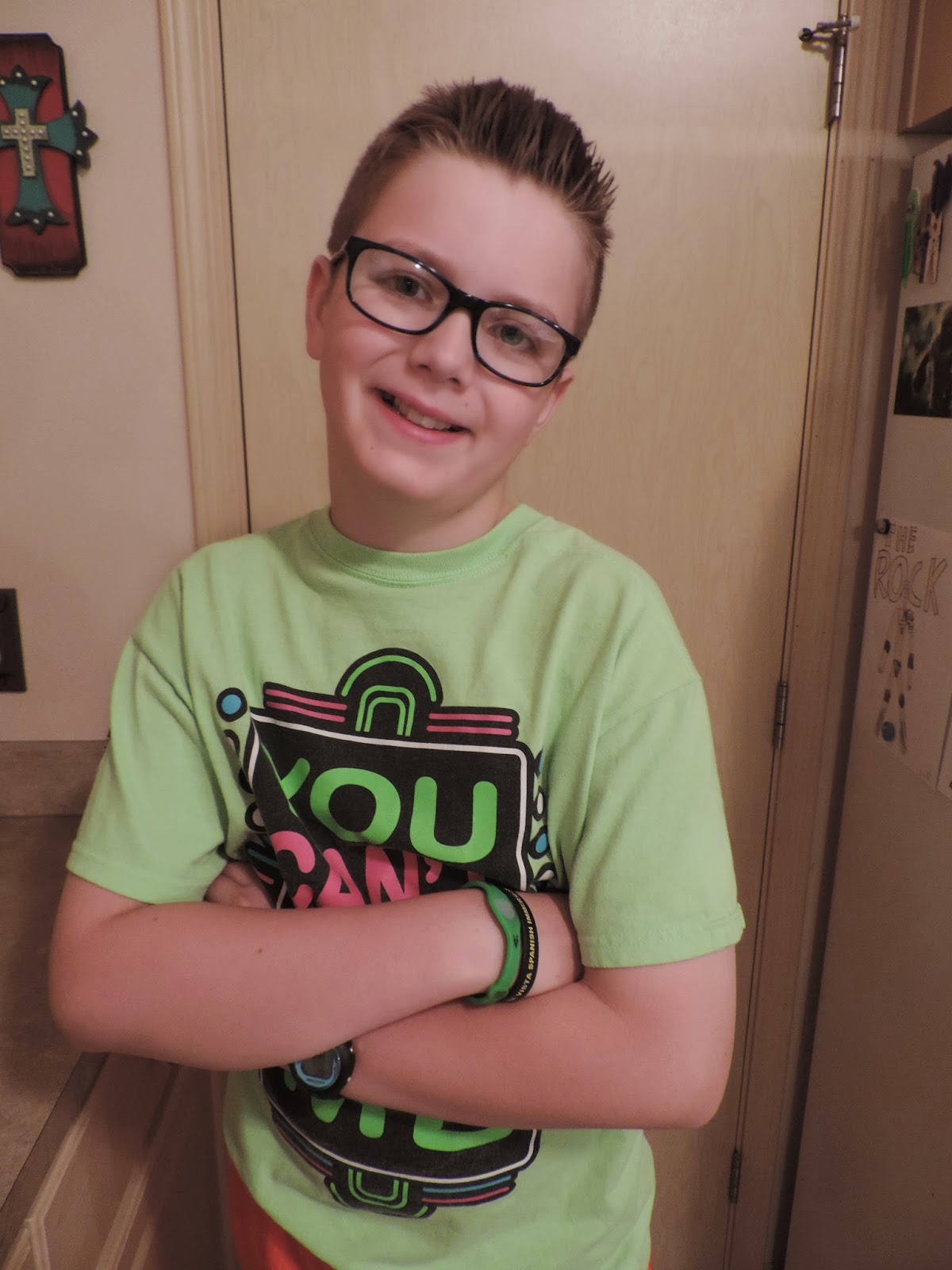 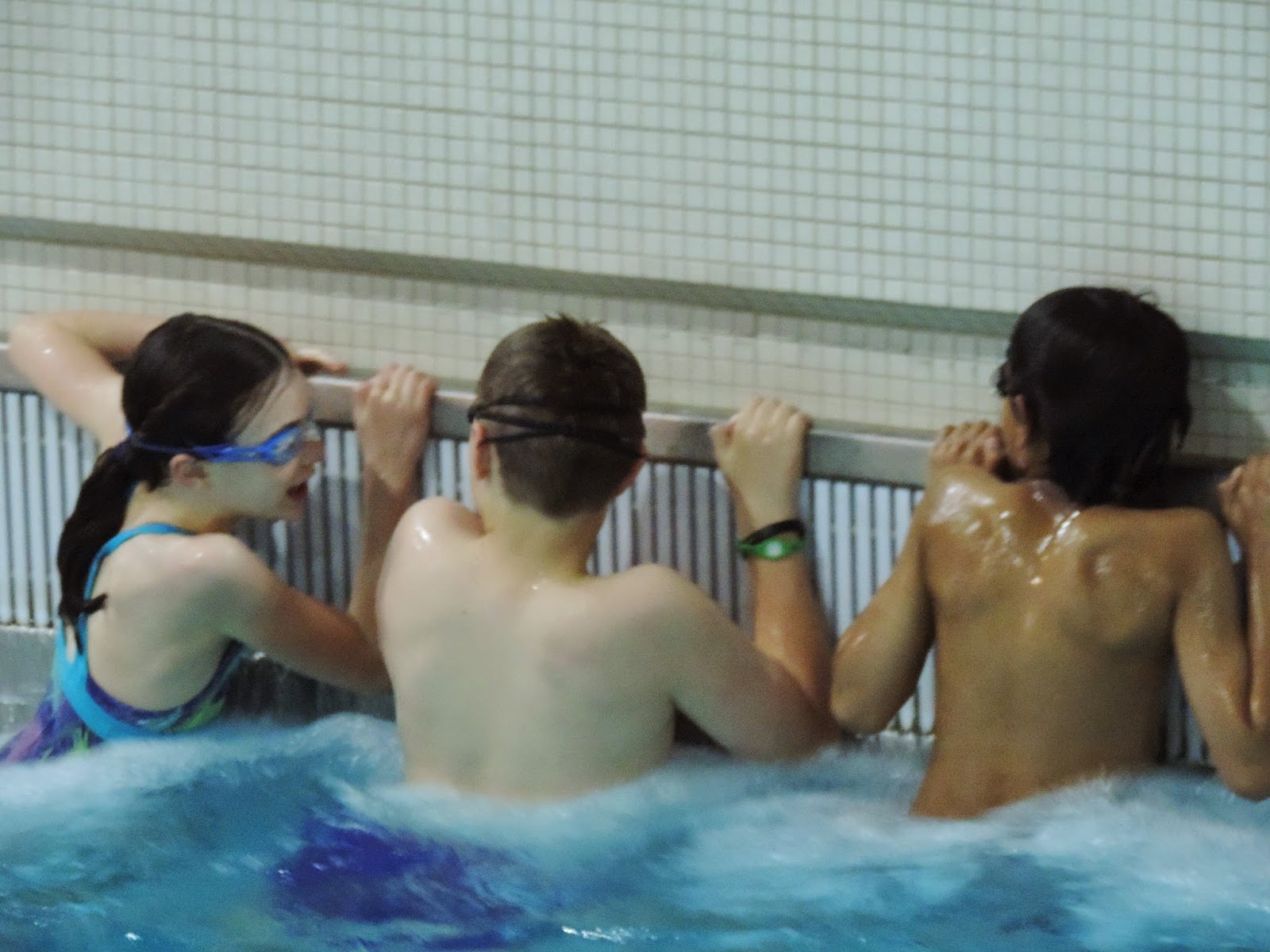 And then, a fun afternoon of swimming at Splash to end the Short Course Season. He had a blast! He and his buddy Varun were inseperable. Another fun girl from Buena Vista who is a year younger than Britt was also there, and they had a big time riding the waves in the wave pool. It is really hard to get a good picture there, though, because of all the movement from the waves. I did my best. 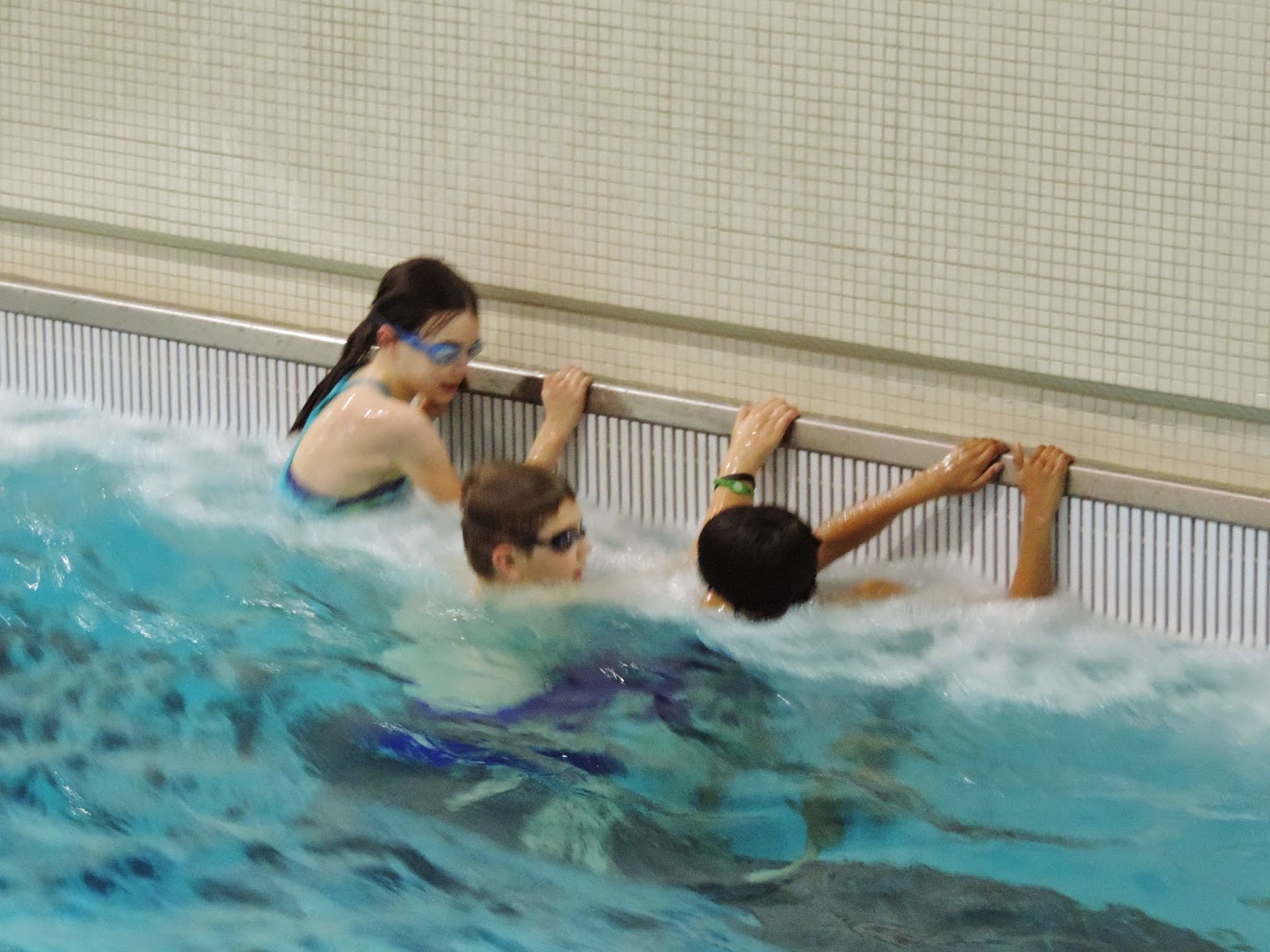 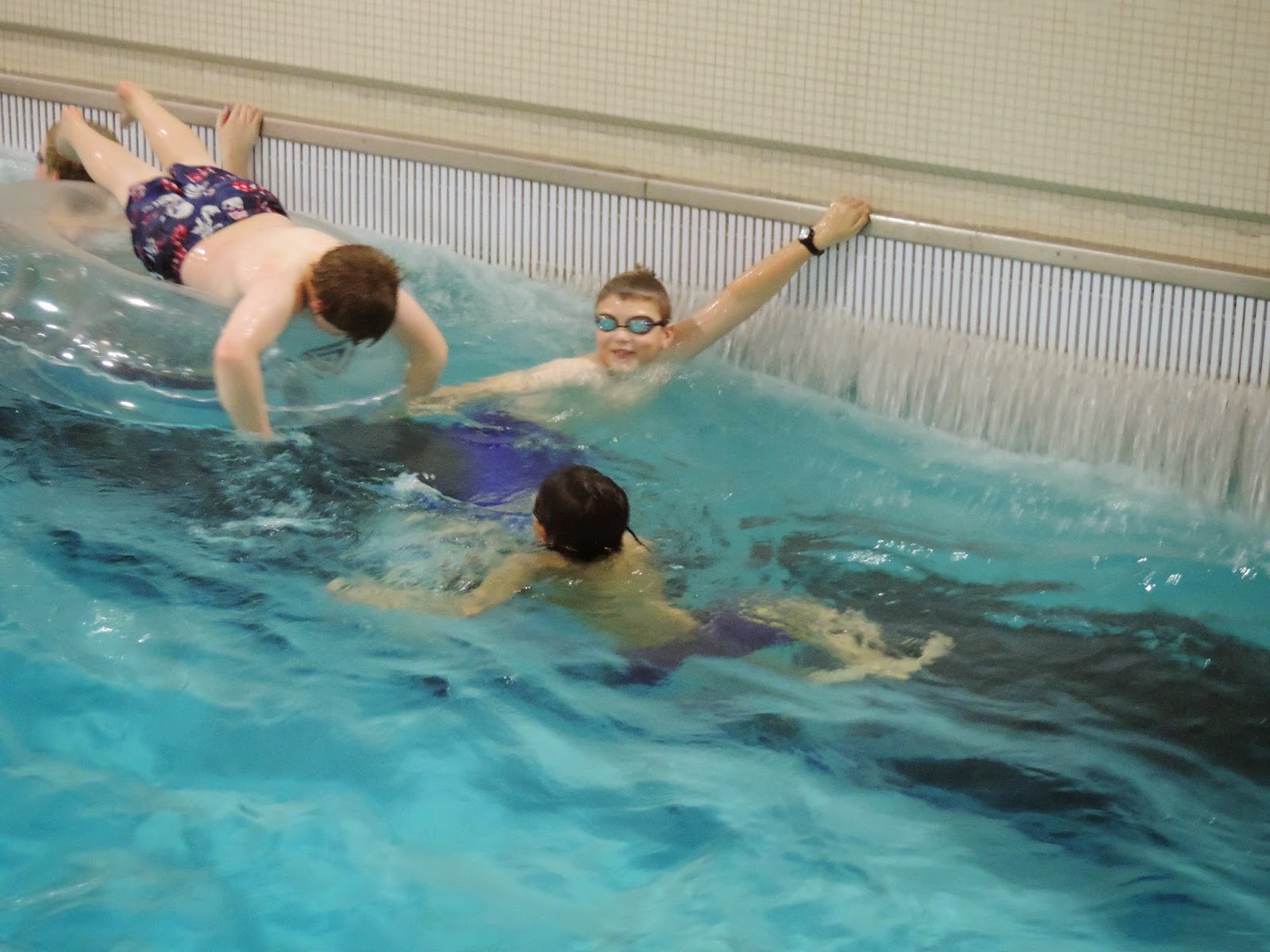 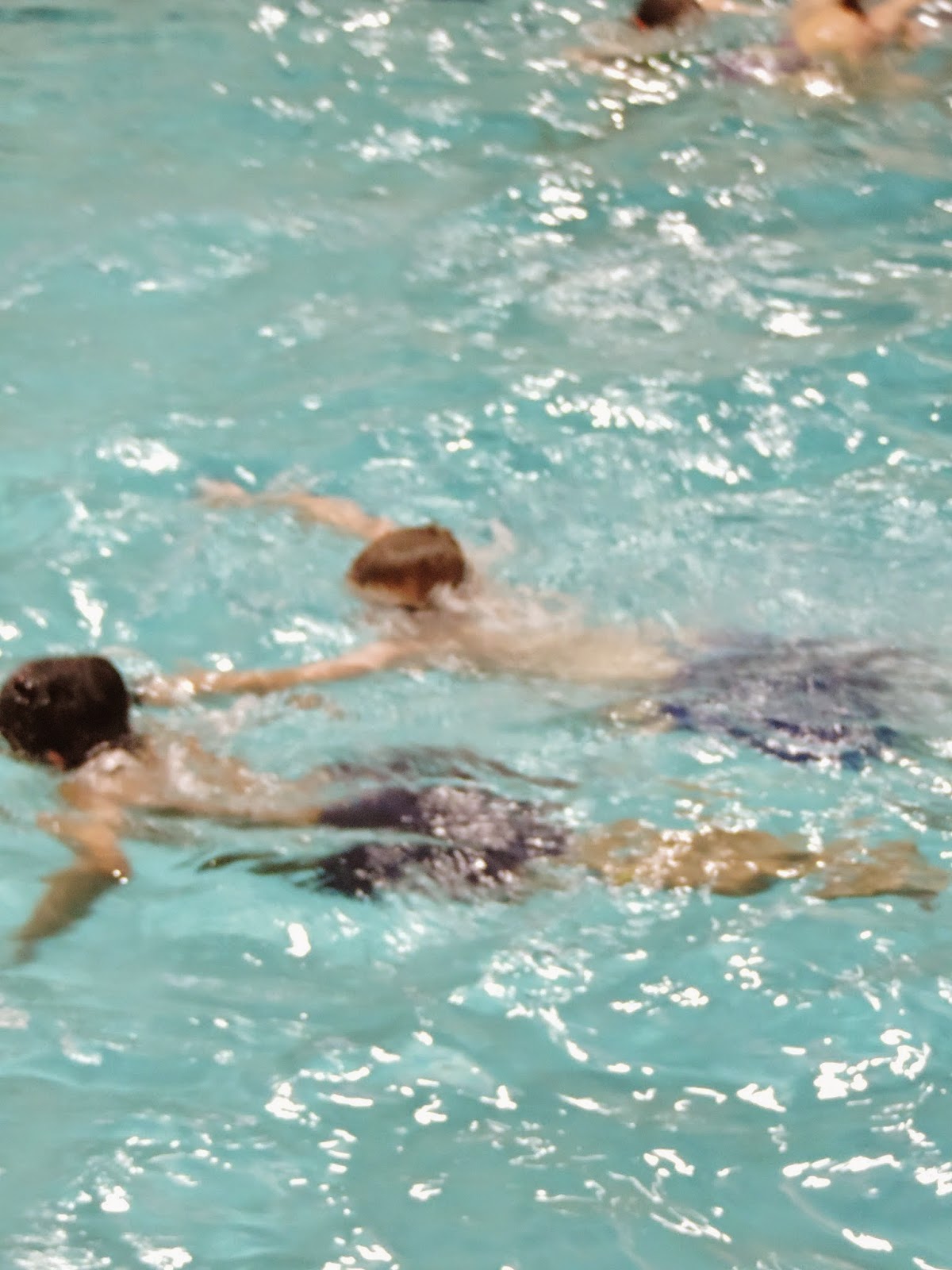 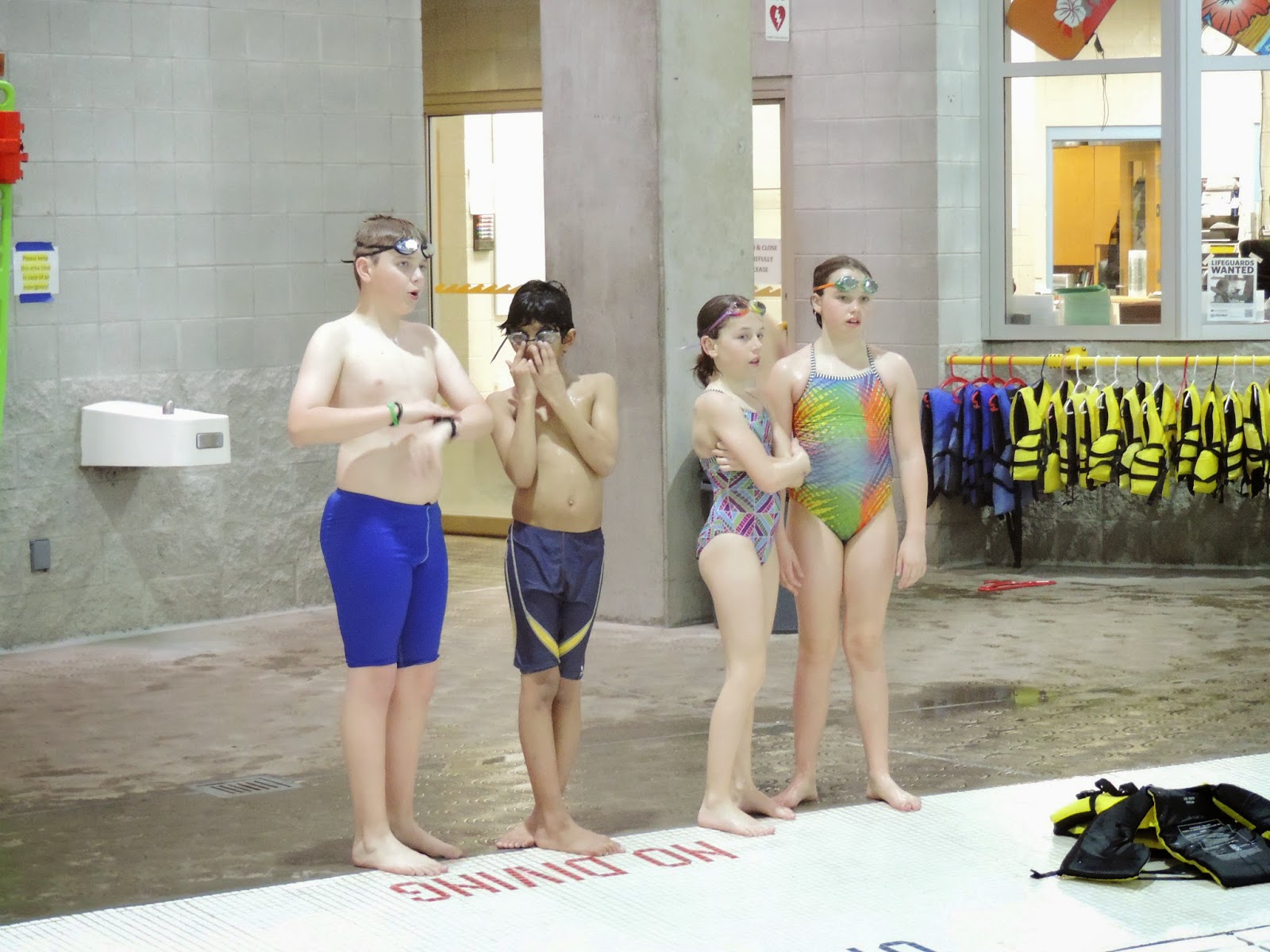 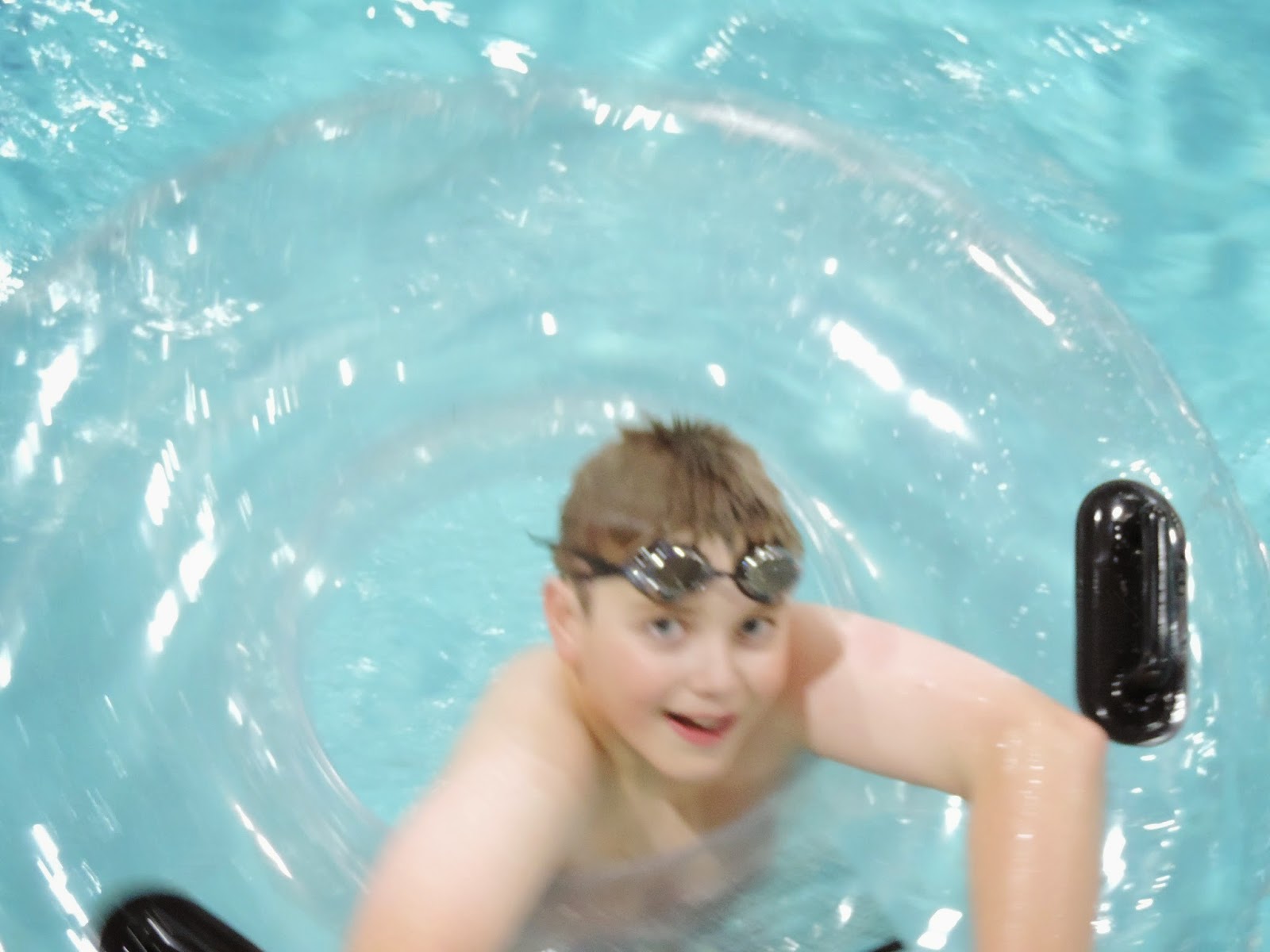 And that brings us to Thursday, Team Spirit Day. Of course he donned his Oregon Duck jersey Brady got him for his birthday - perfection! He also borrowed Brailey's Oregon Duck socks. She borrows his socks all the time, so it was a nice for him to be able to borrow hers. And she was very gracious about it. It was a proud parenting moment, to tell you the truth. I love their sweet hearts! And now it is over, and the last Spirit Week Britt will have as a grade school boy. Bittersweet, that. But it was a good and successful one, so what can we say but HOORAY! 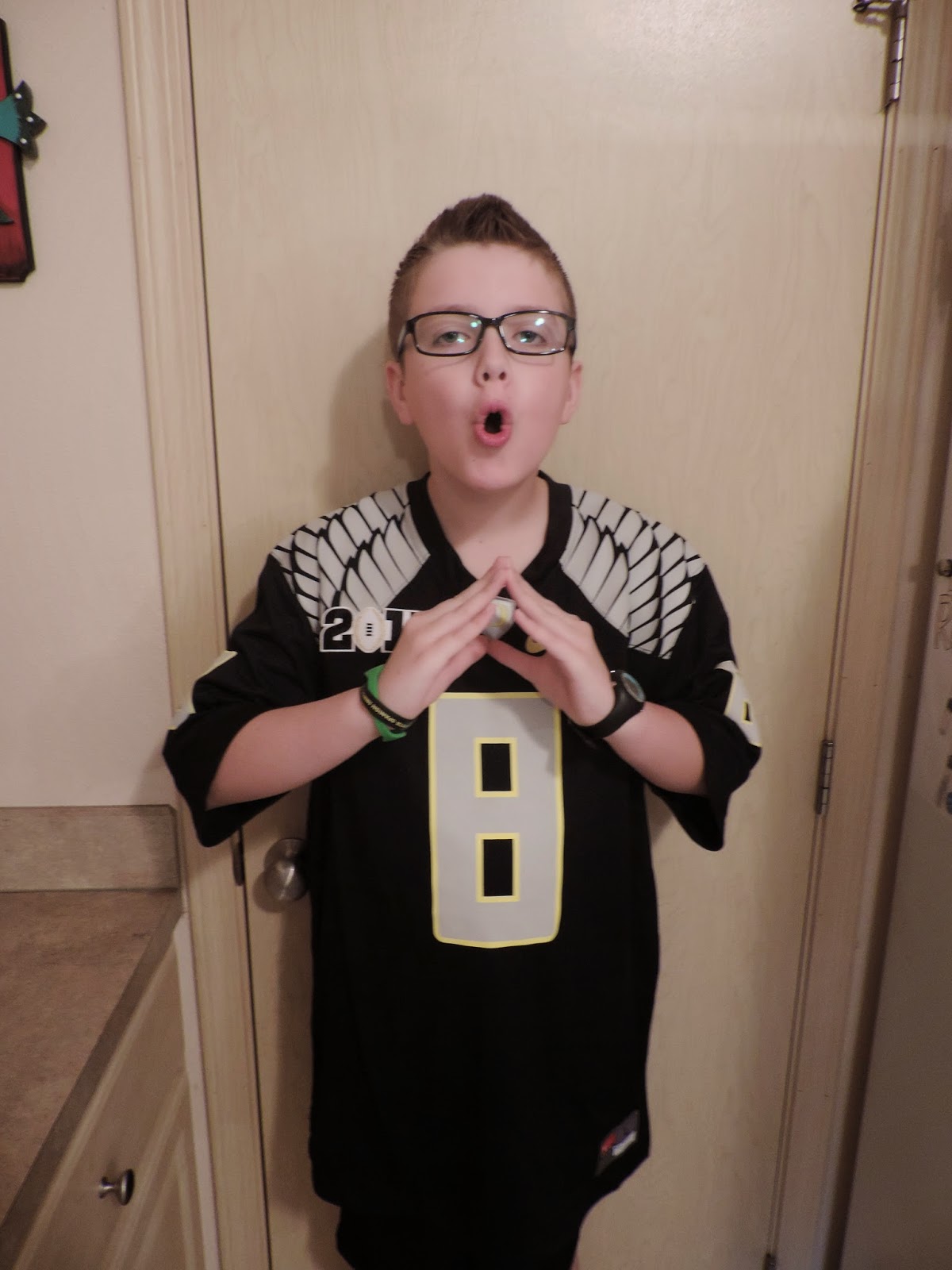 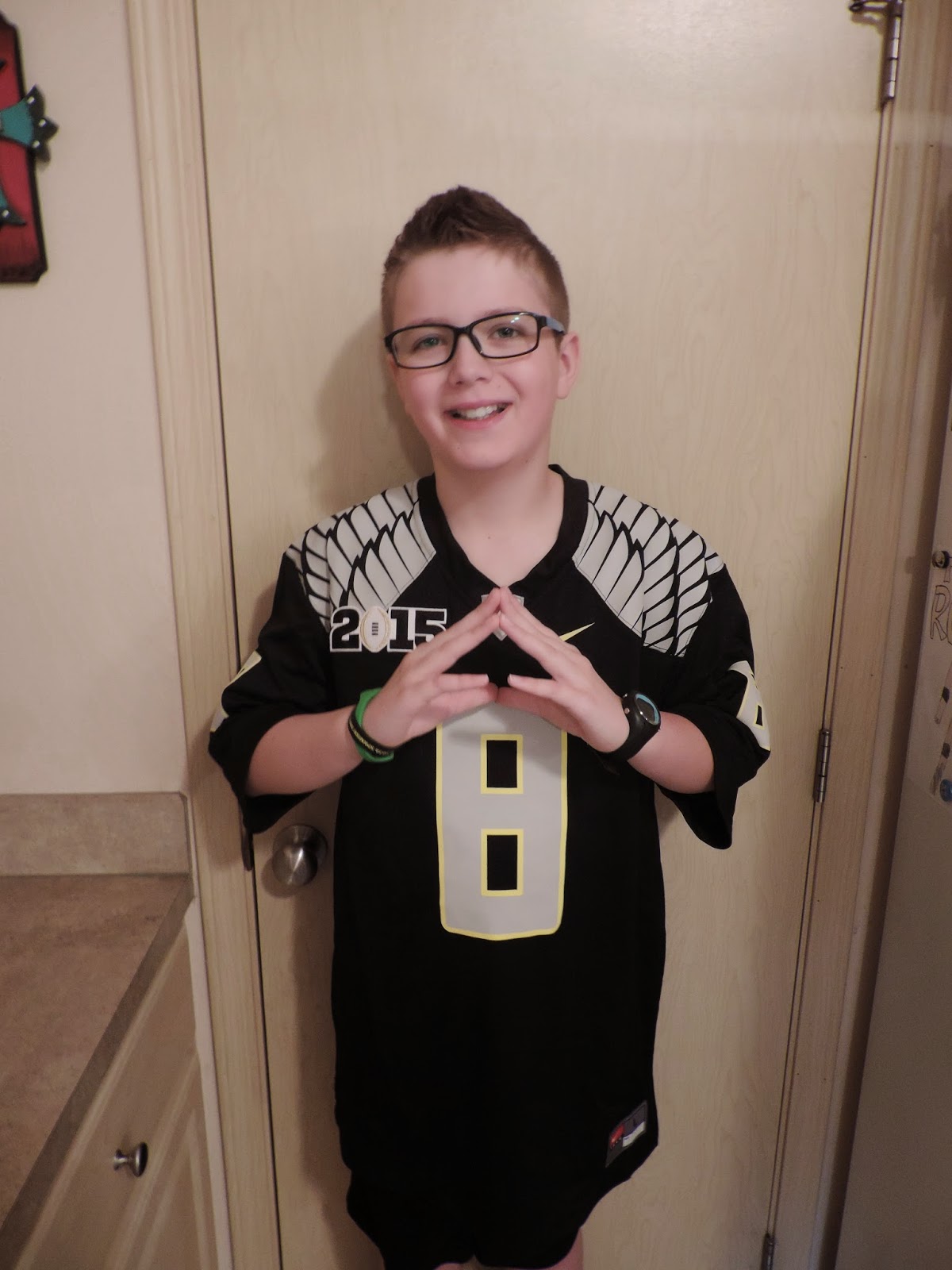 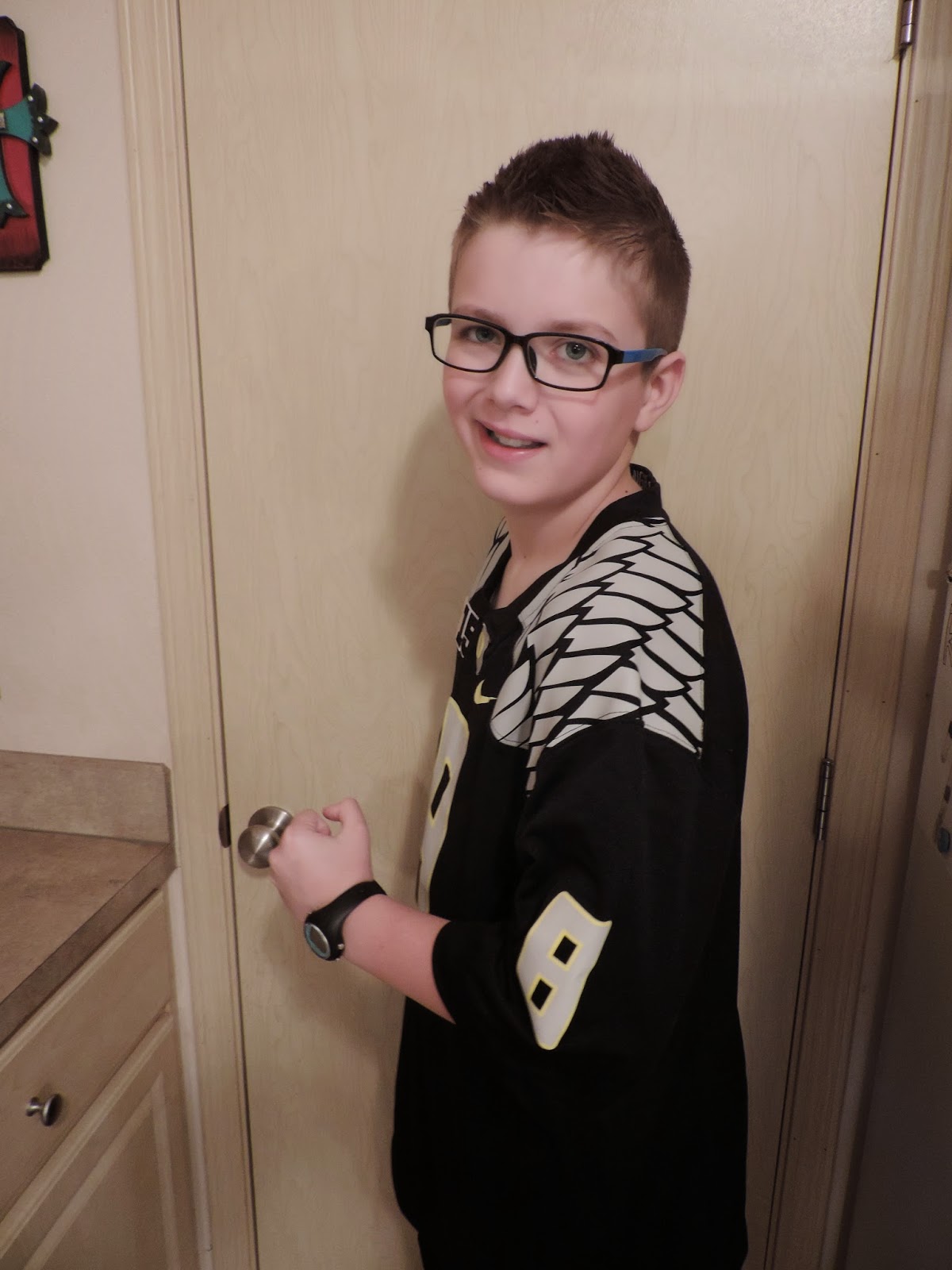 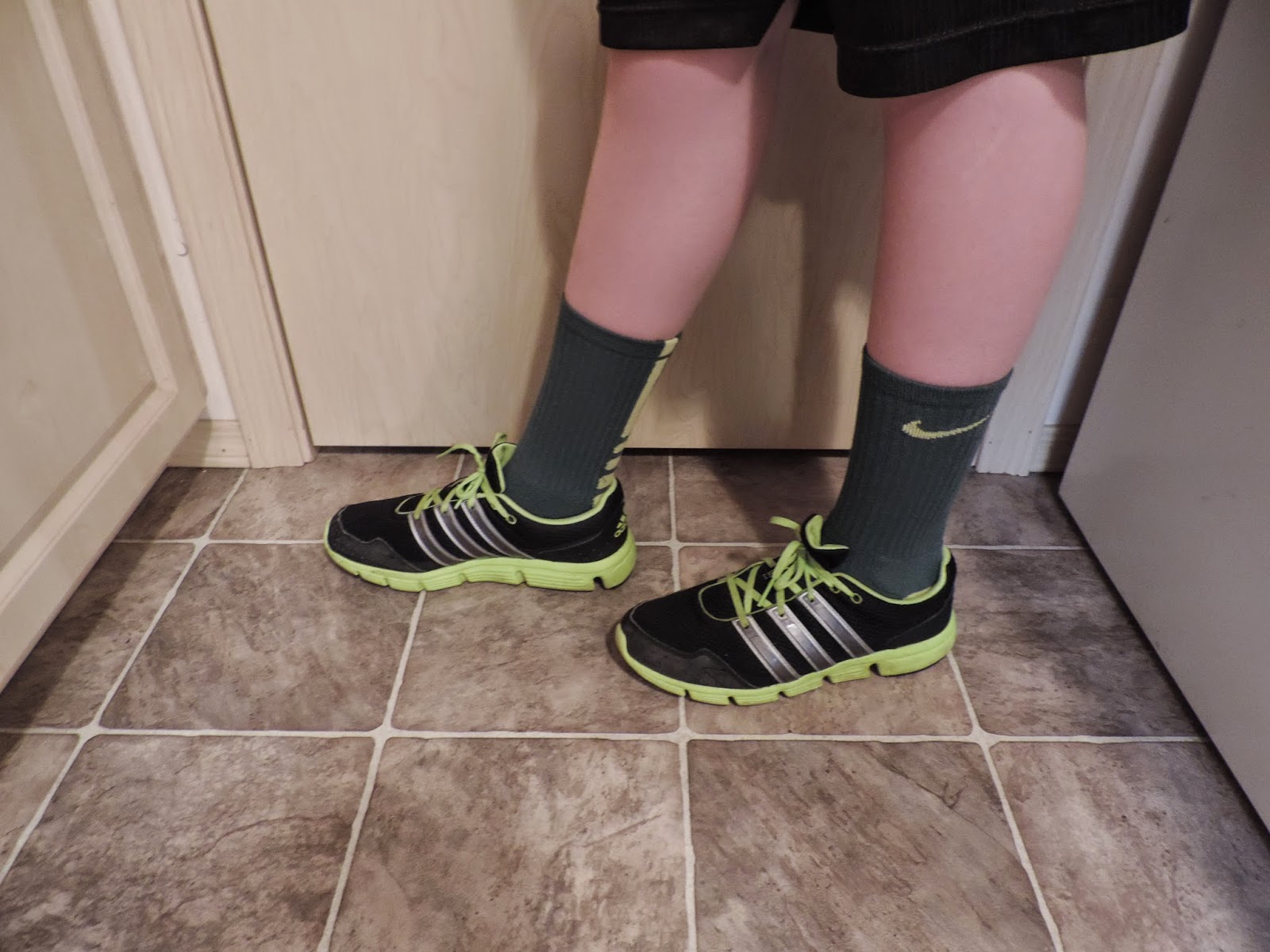 And that brings us right up to yesterday, Monday, where the entire fifth grade gave their presentations on the state they had researched, made floats for and wrote a speech about. Britt was incredibly nervous to give his speech. He practiced it over and over and over again, and guess what? All that hard work paid off! He totally nailed his presentation when it really counted, in front of his teachers and fellow fifth graders. Brady and I were able to go, because it was in the morning before he left for his travels, and we were both so proud of Britt we could hardly stand ourselves! He is an excellent speaker! He had most of it memorized, and made lots of eye contact with his audience and had wonderful expression in his voice. His props were well-executed, and he delivered his catch-phrases in Arnold Schwarzenegger's accent perfectly! He looked like a celebrity in Brady's Ray Bans (which, ironically, are made in California!). Brady and I would have liked to stay the entire day to see all the presentations, because they were so interesting. This class is so blessed to have these two amazing teachers! 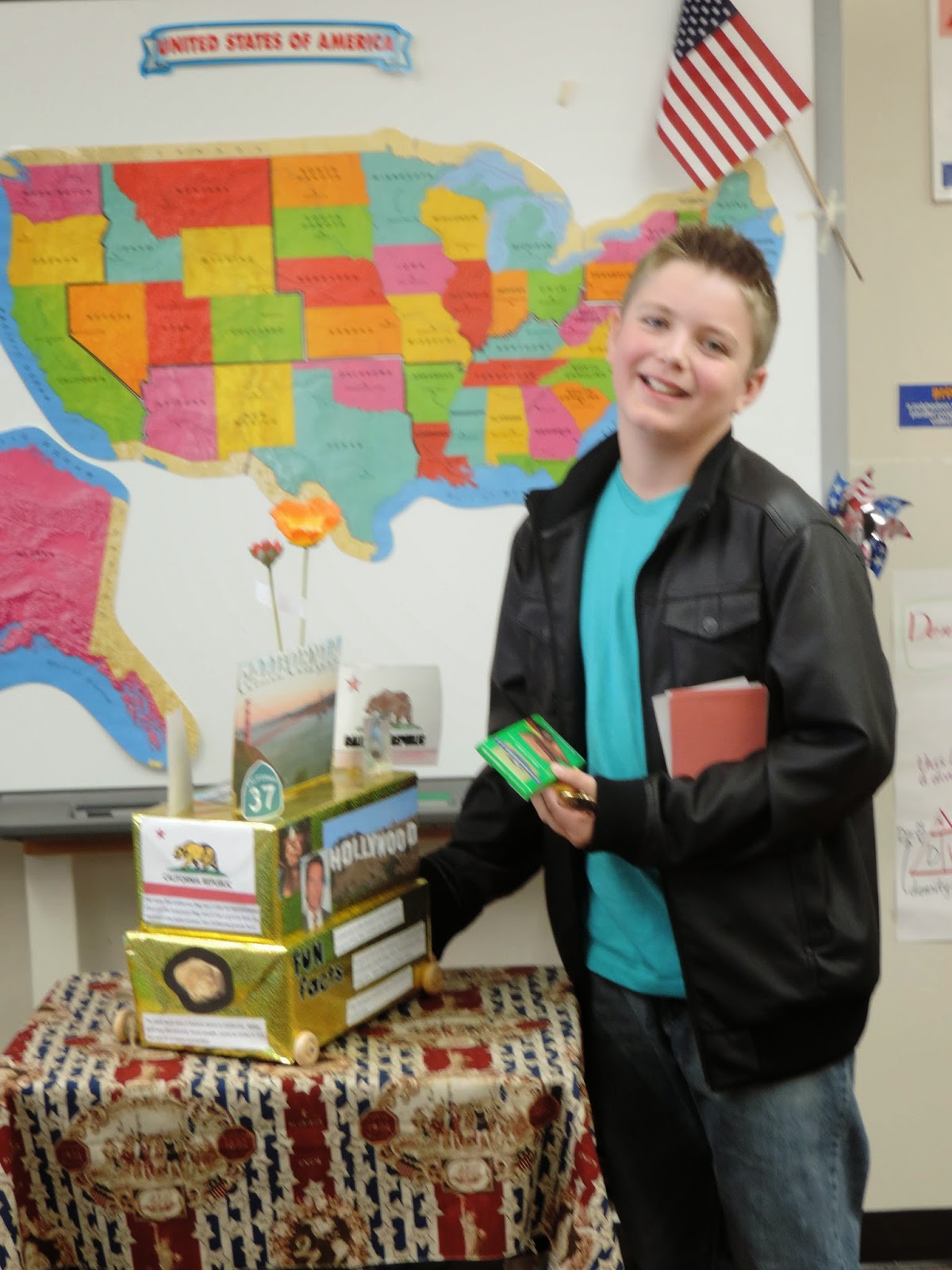 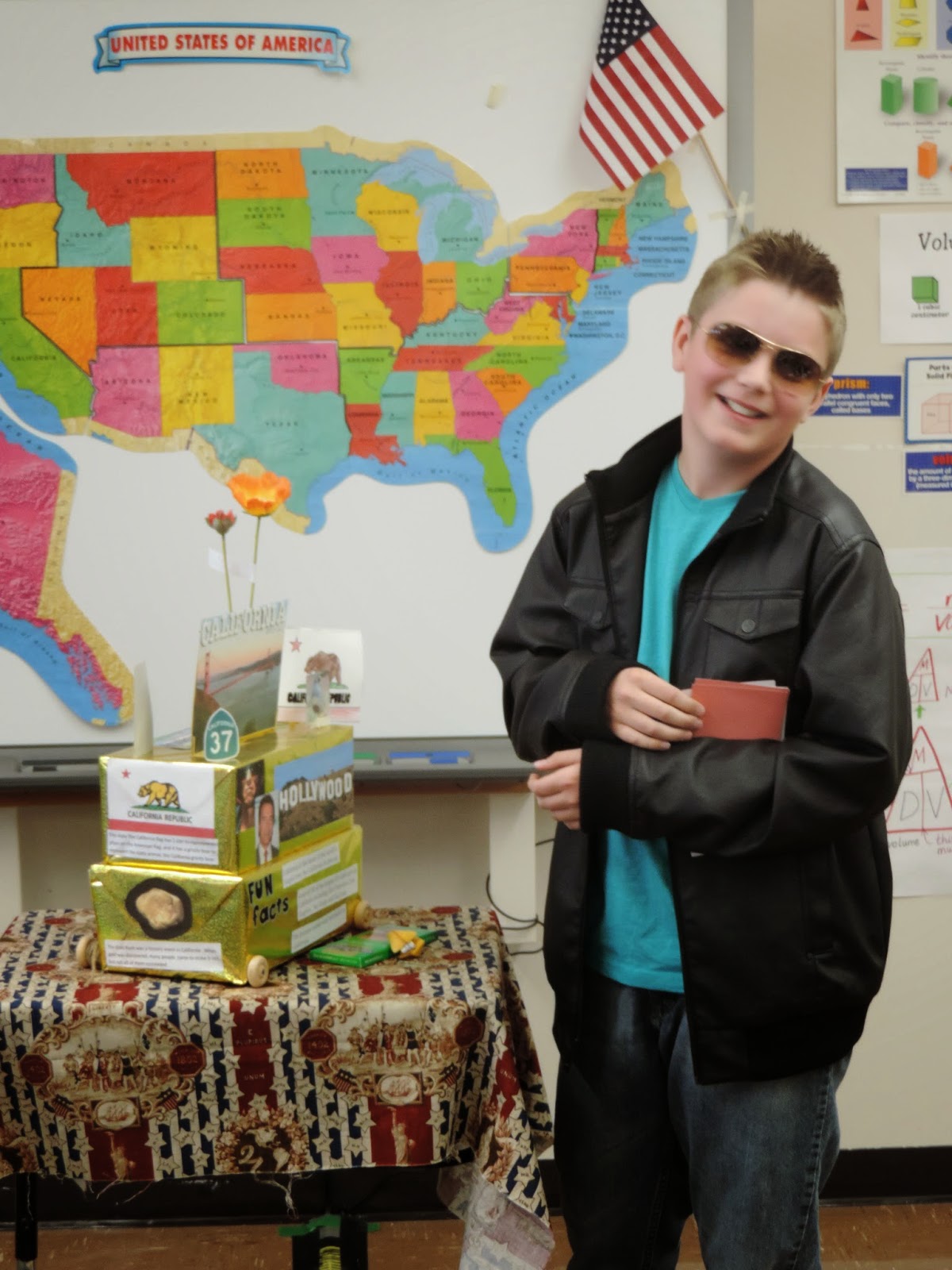 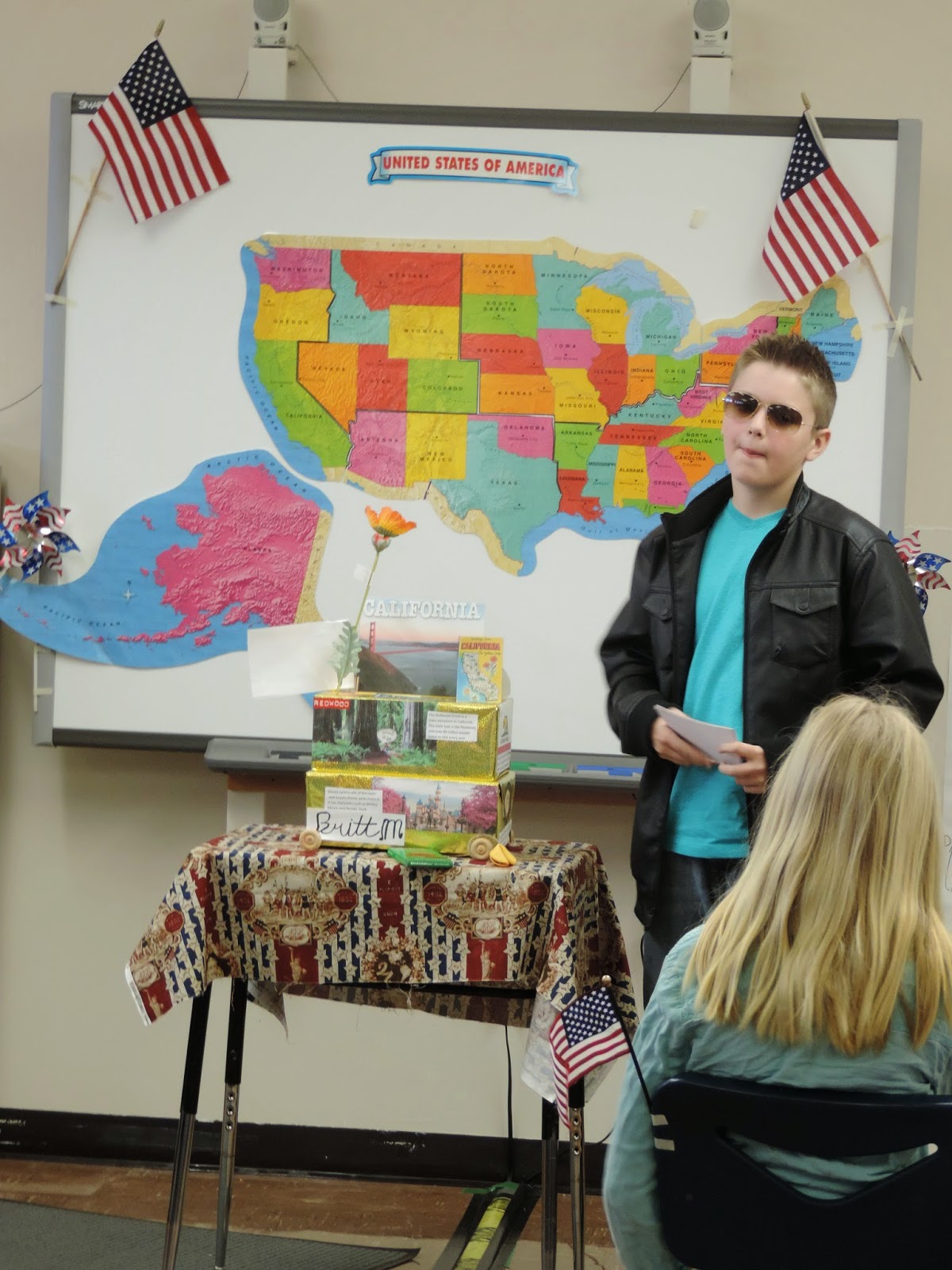 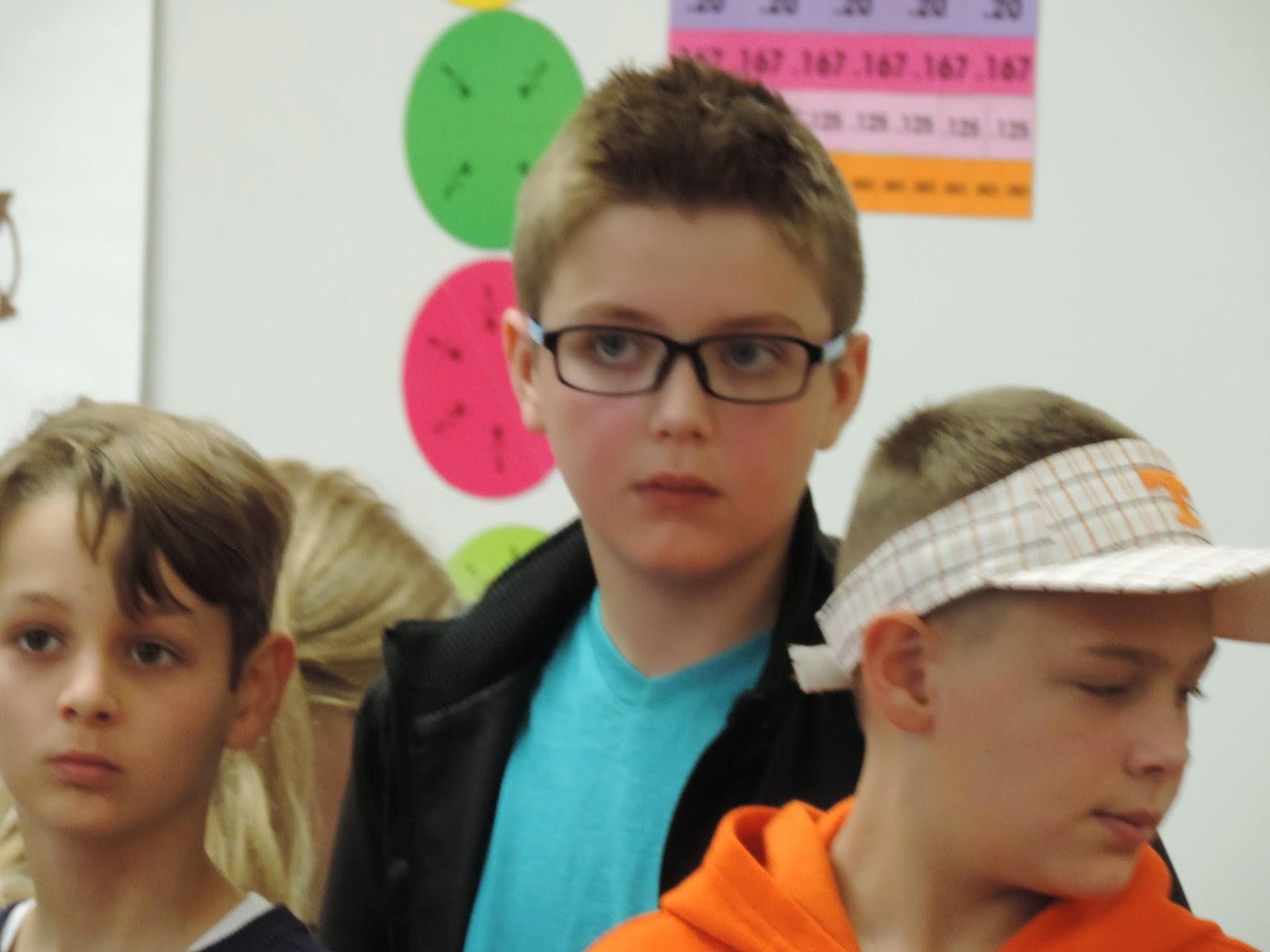 Afterwards, we were treated to a super cool song about our nation. It was a fun little tune and they did a wonderful job singing it. It was a very special day for all these kiddos, and showed them that hard work pays off. They all learned about being successful, yesterday, because all of them did a great job. They will use this experience in their futures, no doubt about it. Muy bien! 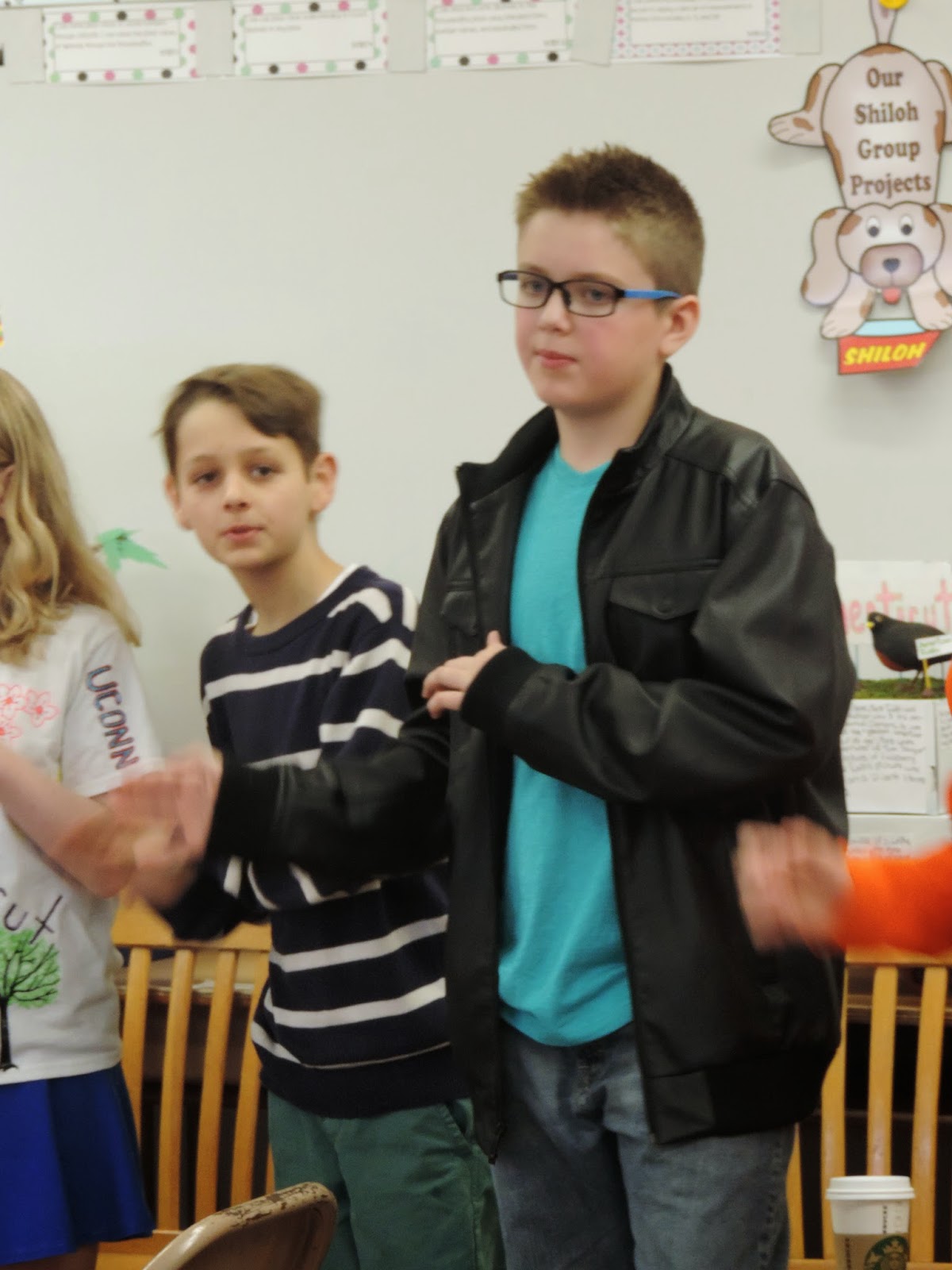