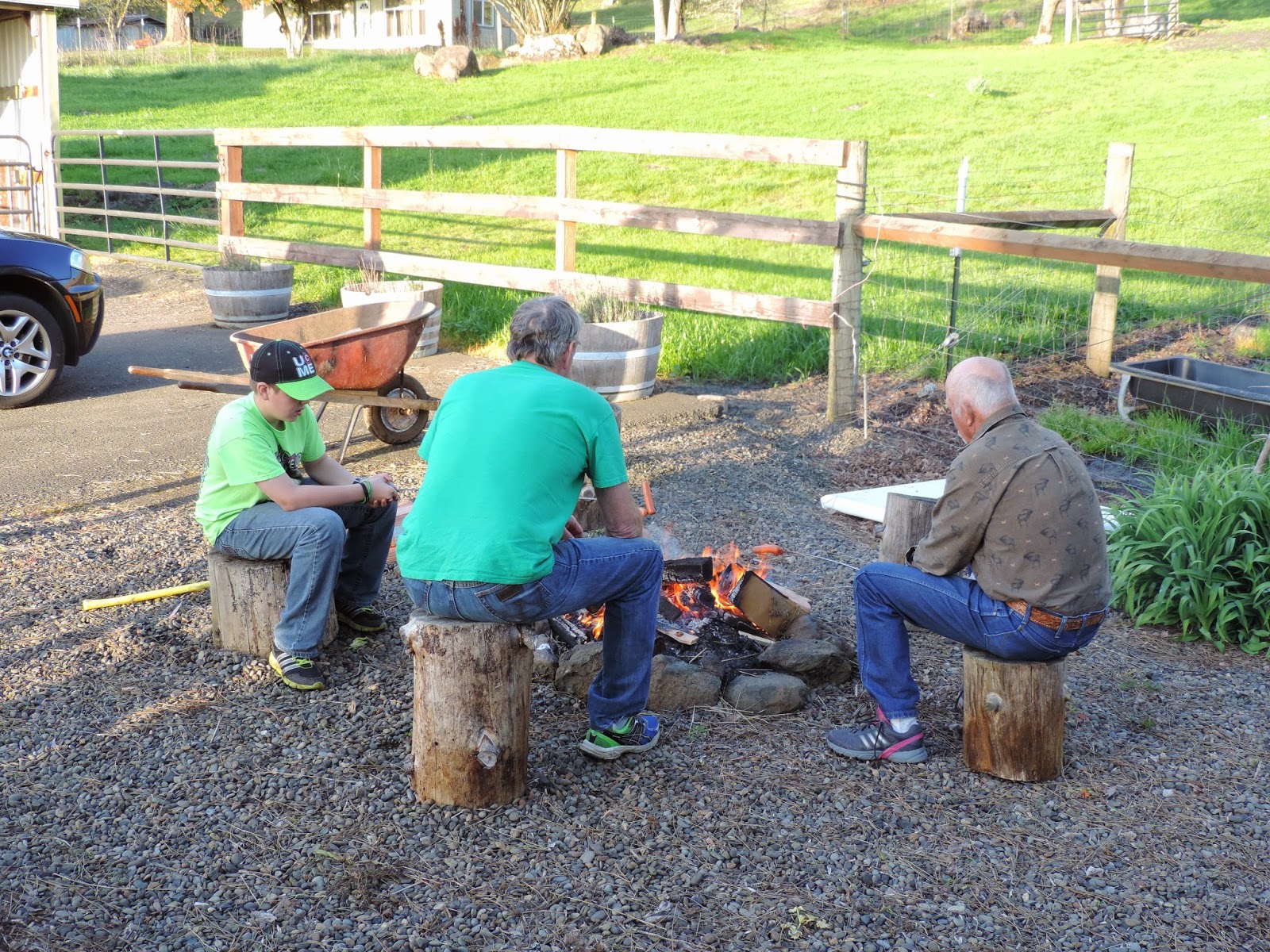 Where did the last seven days go? I swear they flew by in LESS than the blink of an eye... Makes my eyes water, in fact. BUT! The good news is, we got some long overdue projects done, and we had some beautiful weather. Back in January, when my parents came to stay with Bray and Britt while Brady and I were in Denver, my dad made the mistake of telling me he would come back to help us with our limb cleanup. We weren't able to get the limbs picked up in our upper pasture last year after the ice storm, and I had told my dad it was an overwhelming project. He worked on them while he was here in January, but ran out of chain saw gas. Thankfully, though, he understood my whining about it, and praise the Lord, he and my mom came over at the beginning of Spring Break to help us out. And truly, it was an overwhelming task, especially with Brady's bum leg, but what they say is true - many hands make light work, and not only were we able to get the limbs cleaned up, we went the extra mile and cleared out a bunch of blackberries, rose bushes, extra trees and debris. Above, we started the weekend with a hot dog roast, which is the first one we've had in a couple of years. There's just nothing better than a fire roasted hot dog, is there? 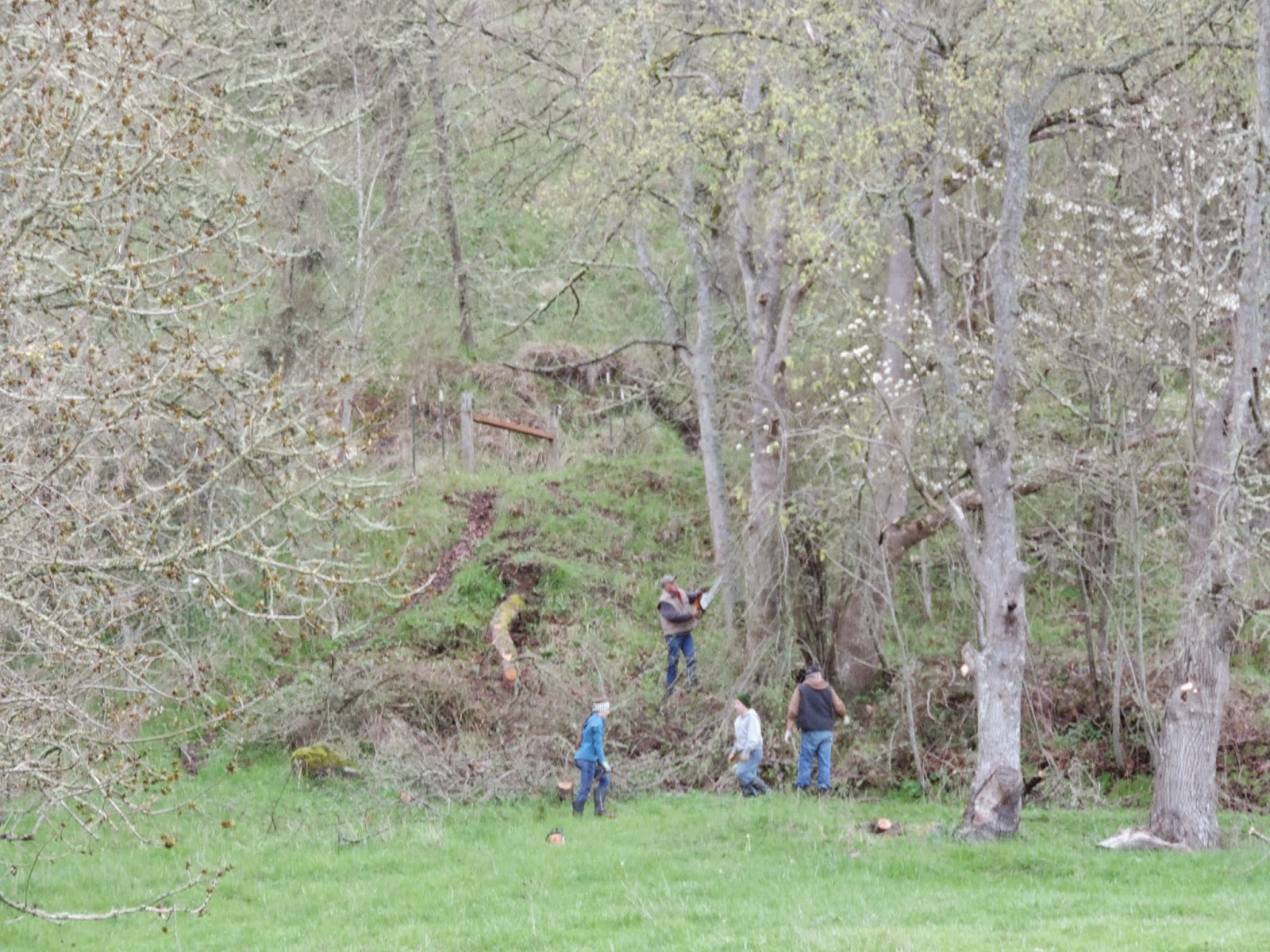 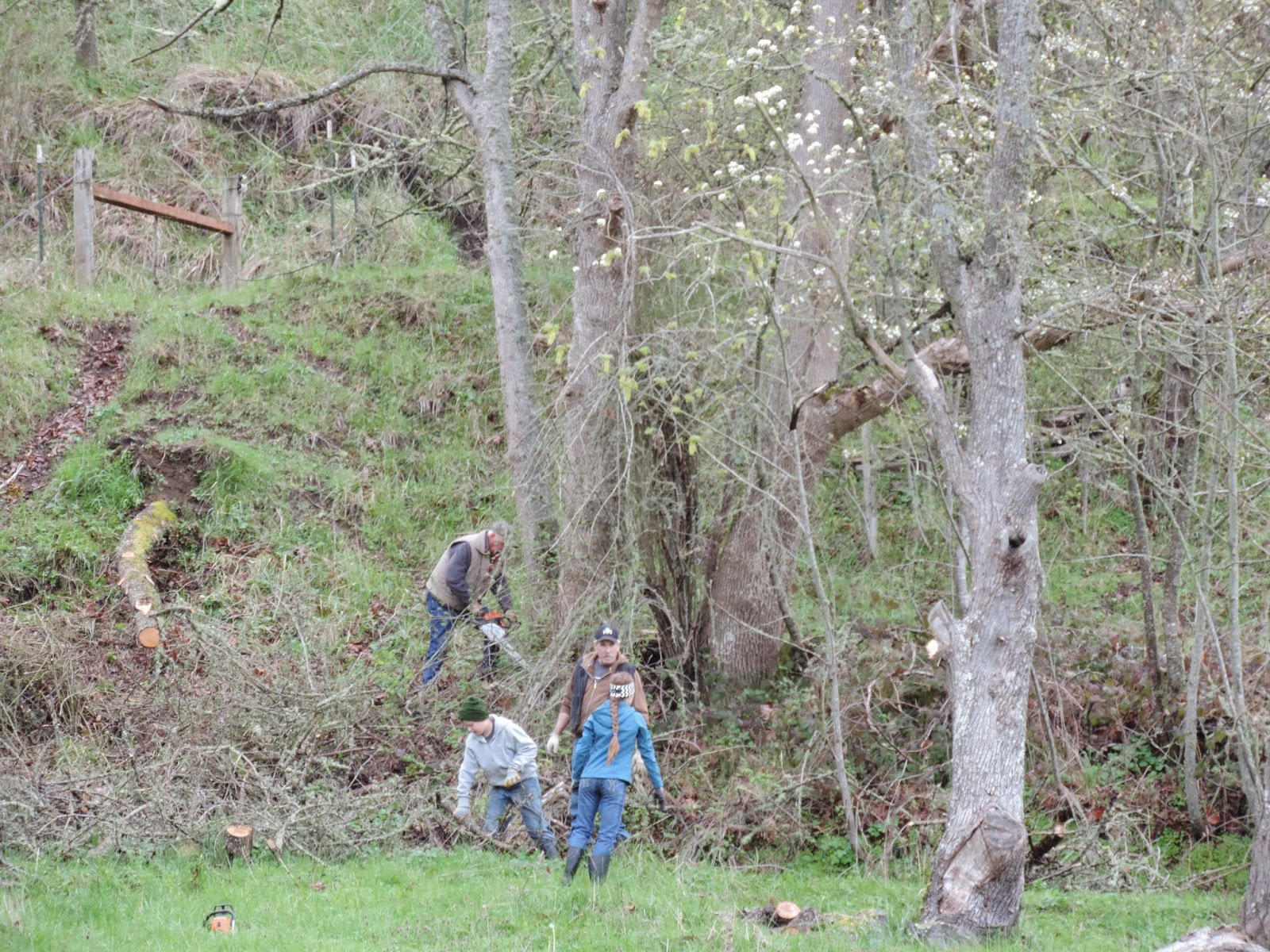 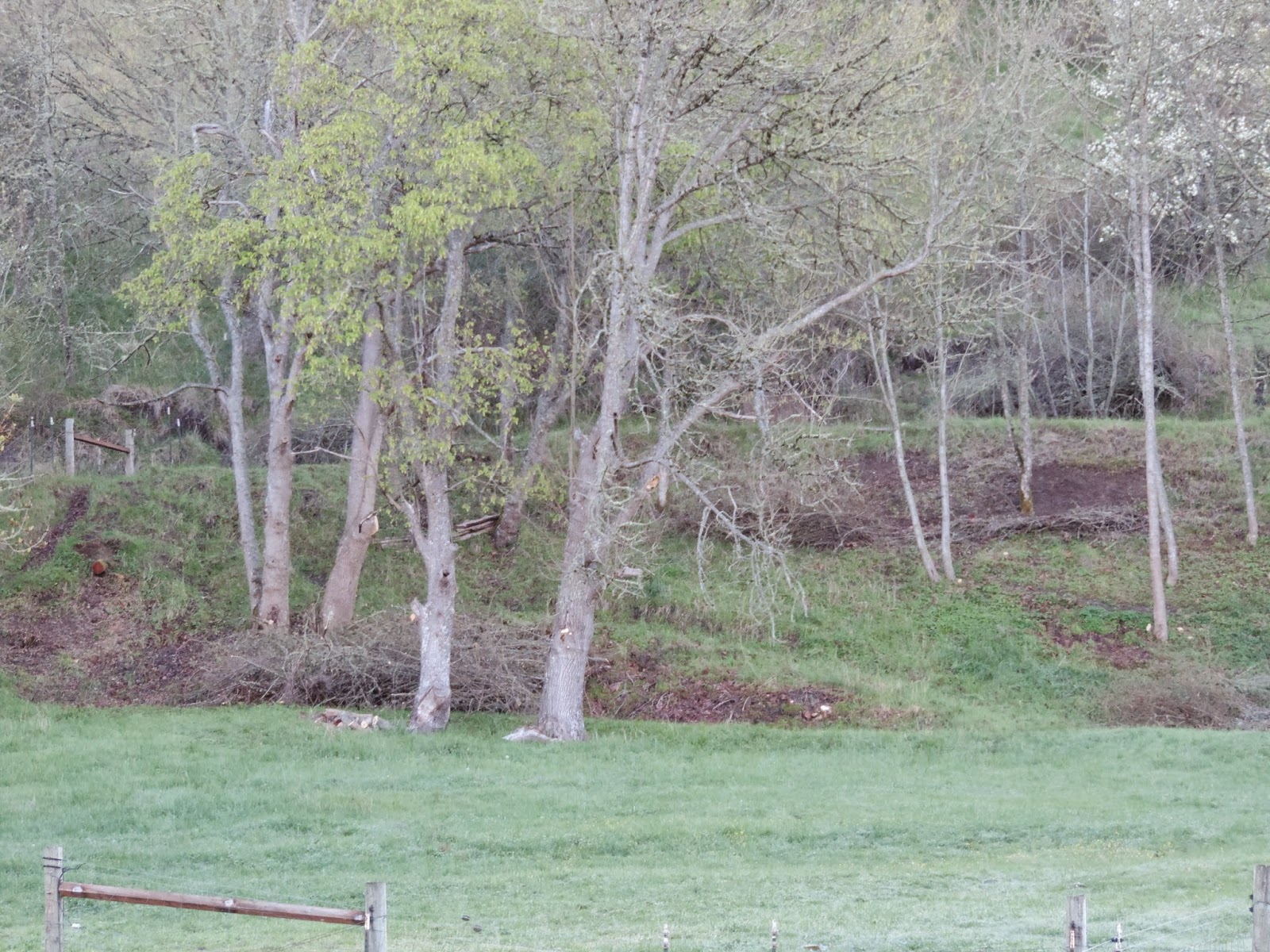 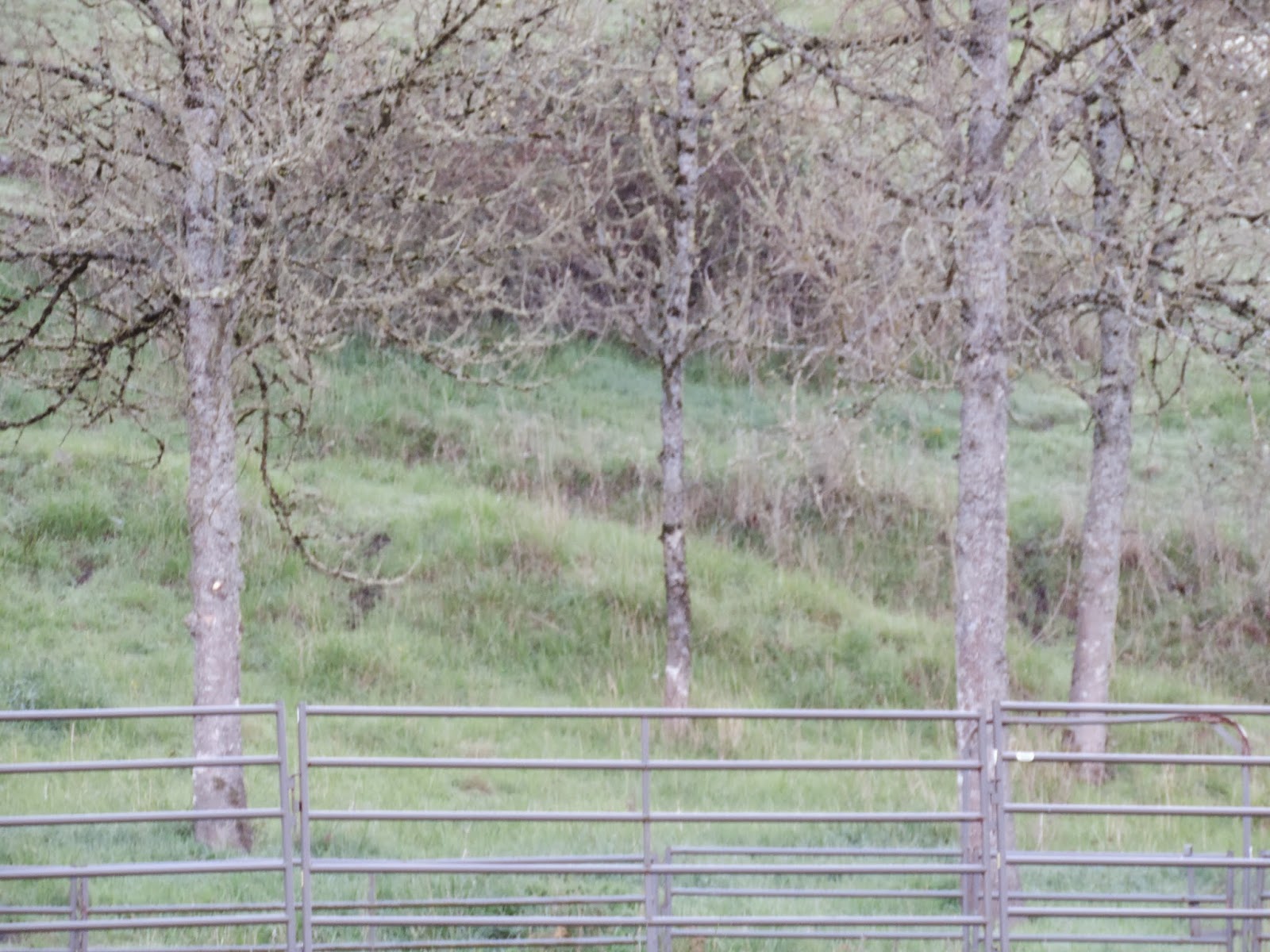 We knew we had poison oak on our hill. The horses and cats spread it to us every year. But we had NO IDEA how terribly infested this area of the hill is with the nasty plant. I washed everyone's clothes several time in an effort to curb our catching it. My dad was smack in the middle of it, and I know it touched him, but he didn't get it! Britt and Brady got a little, my mom got a tiny bit, Brailey escaped unscathed and lucky me, I hit the mother lode and have a terrible case of poison oak. I loathe poison oak, and this is a huge understatement! Still, I'm really glad we got so much done on this area of our property. Yay! And thank goodness for my old dad being in such great shape and loving to run a chain saw! 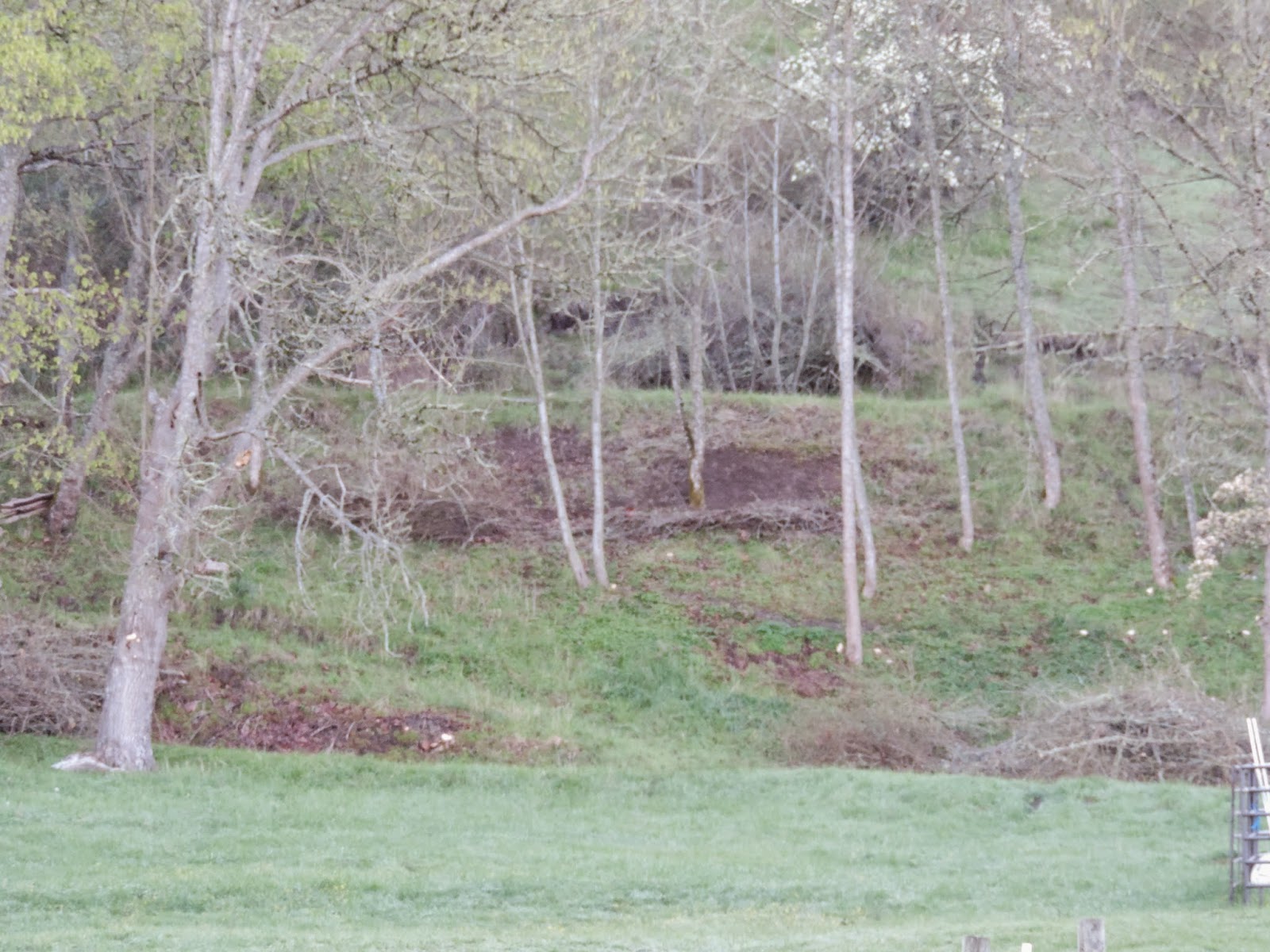 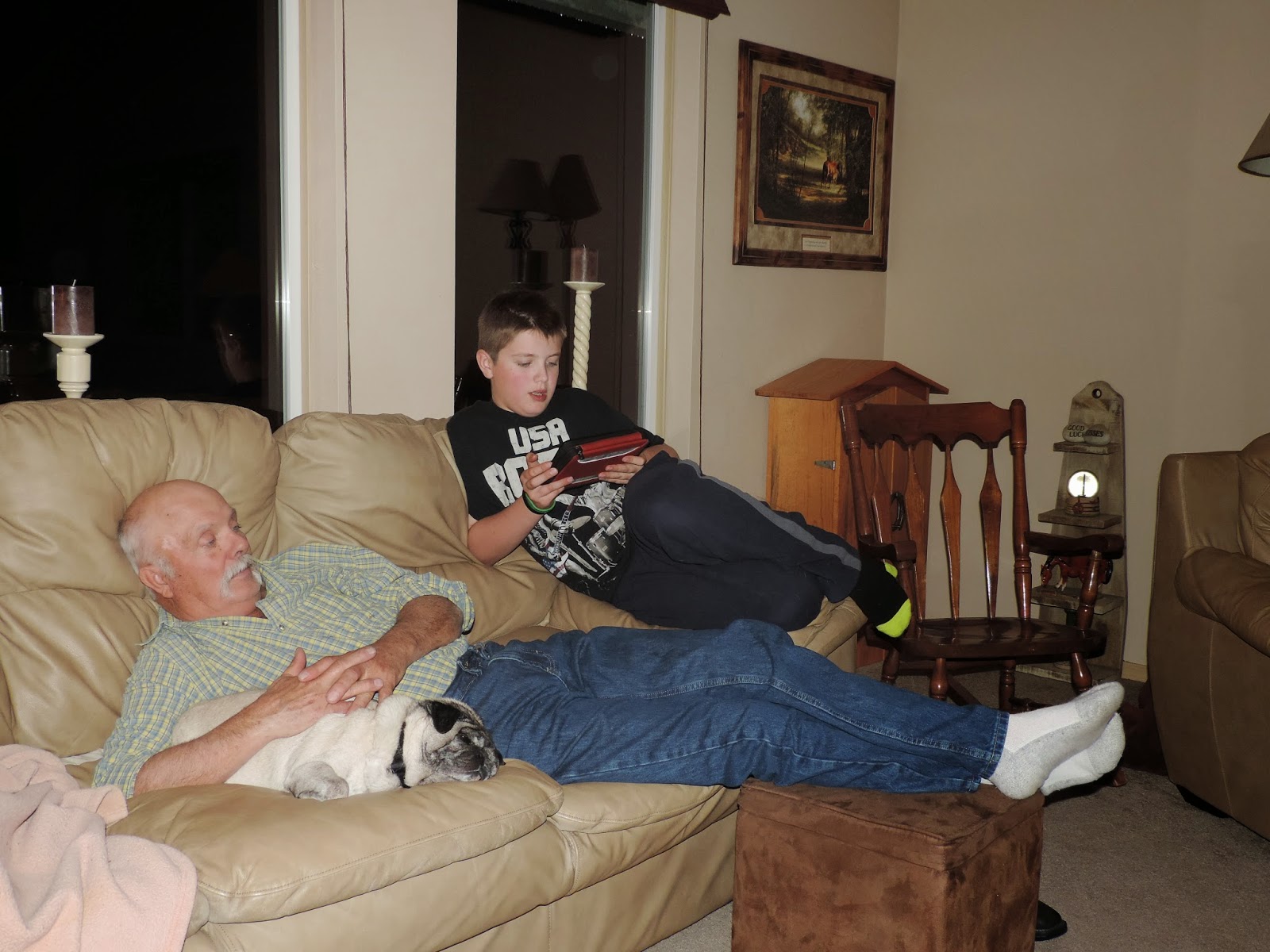 As I mentioned before on Instagram and Facebook, I didn't get very many pictures, because we were so busy working. We did get to watch Monday Night RAW with my parents, though, and Britt found an app that has a survey to tell you which wrestler you are most like. Above, he is giving the quiz to my dad. My mom managed to suffer through the show - for some reason, she hasn't found her love of WWE drama like the rest of us have. We are still trying to convert her, but she's being stubborn on the matter, much to her grandchildren's dismay. They just can't understand how she couldn't love it! 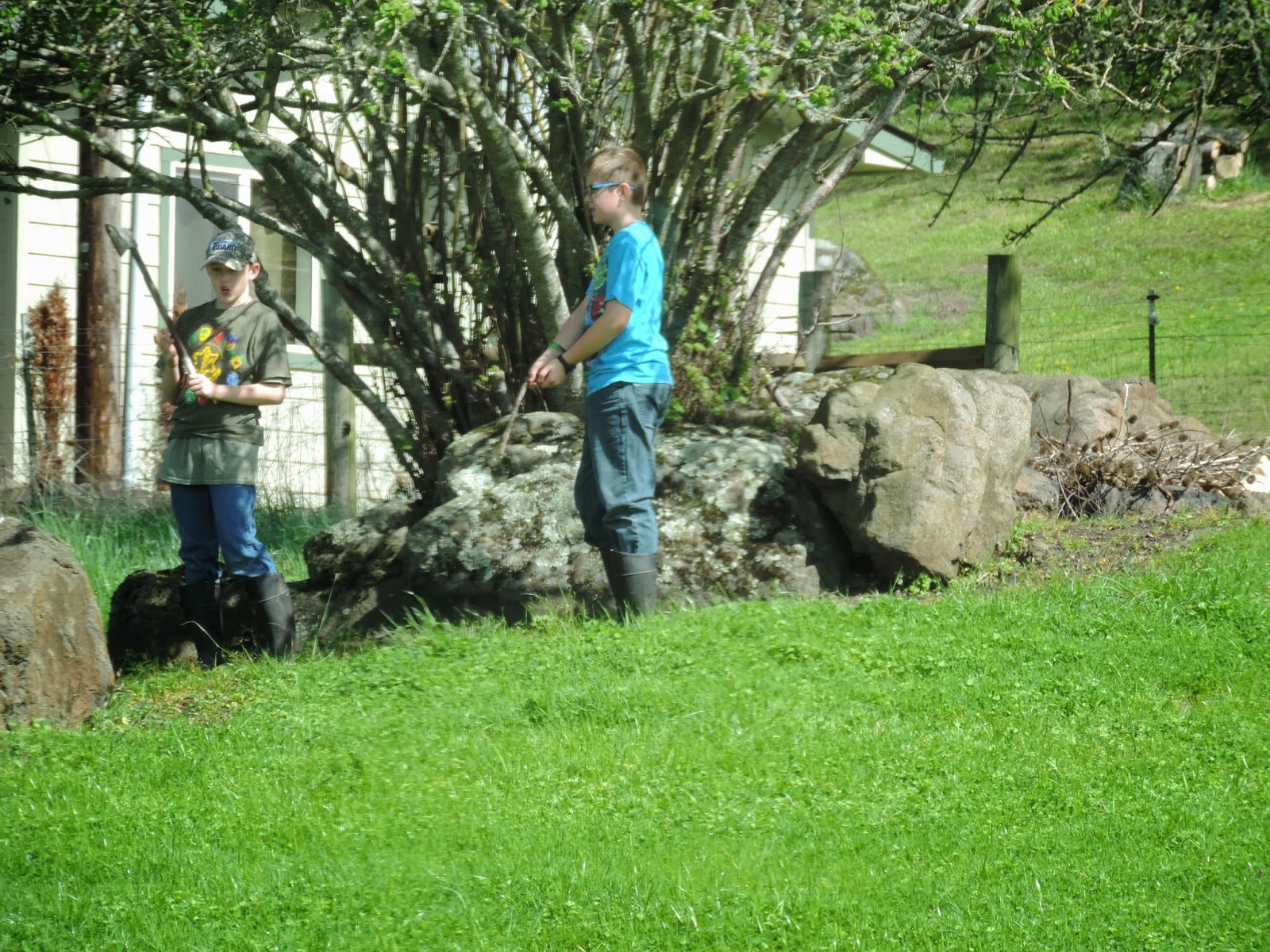 At the end of week, we were able to fit in time for friends. The house was in shambles, as we finally repainted Britt's room, which is what took up the middle part of the week. Last year Britt and Daniel had a play date during Spring Break, and we redid Brailey's room, and Daniel's mom, my friend Kristin, got to see all the loveliness from Brailey's room, as well. She was also treated to the mess my house was during the week after Brady broke his leg this past summer. And most recently, the chaos of Britt's room. We finally got the house cleaned on Sunday, and I felt like calling Kristin so she could come and see our house NOT in shambles! All kidding aside, I know Kristin understands and she doesn't judge me, but it is kind of funny that everything is a mess every single time she has come out. The silver lining is that Britt and Daniel weren't bothered by the mess one bit! They still had a big time playing on the hill, climbing trees, having Nerf gun wars, playing with Legos and army men and talking up a storm. They are really fun to listen to. I love their precious hearts! 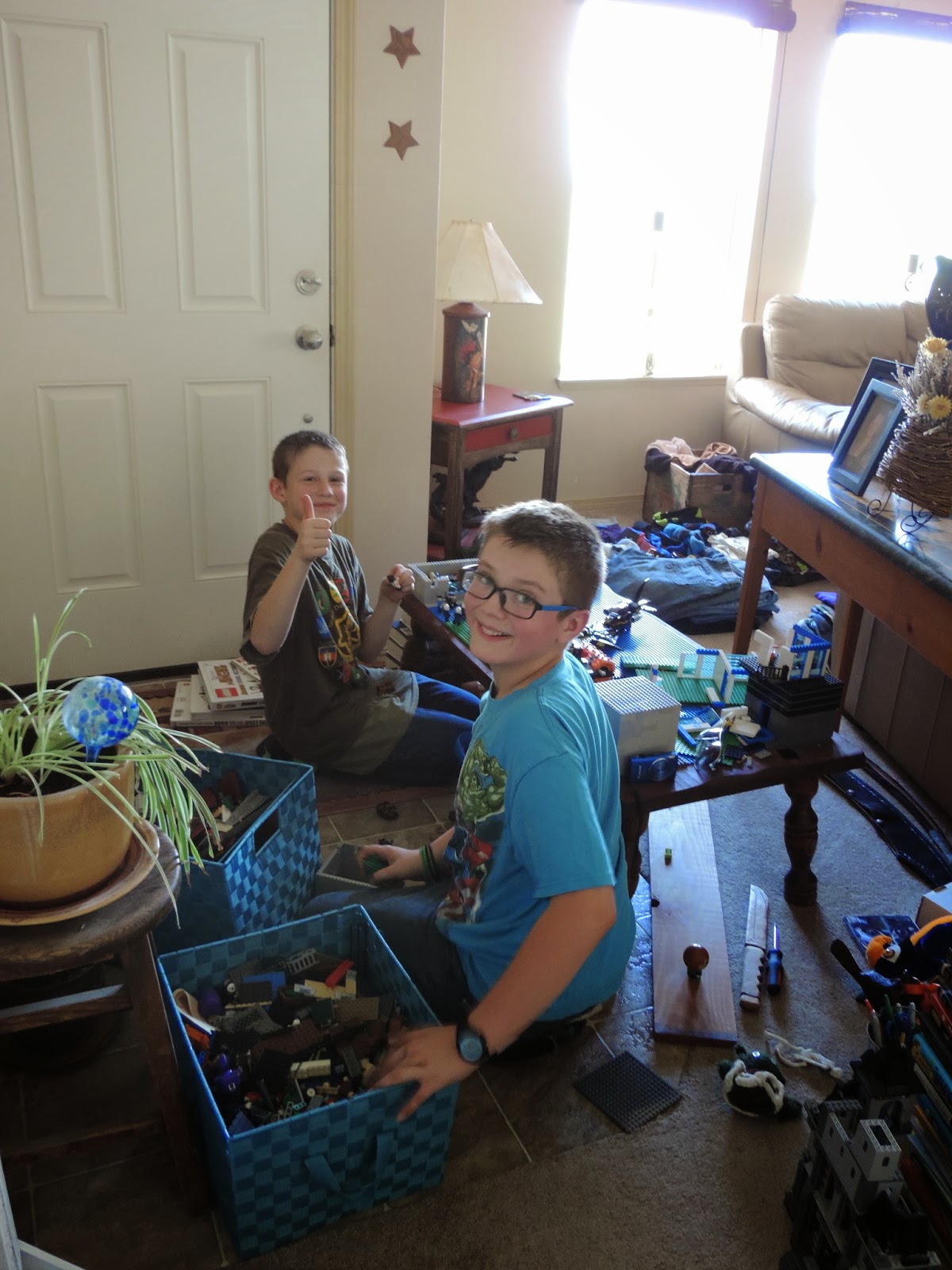 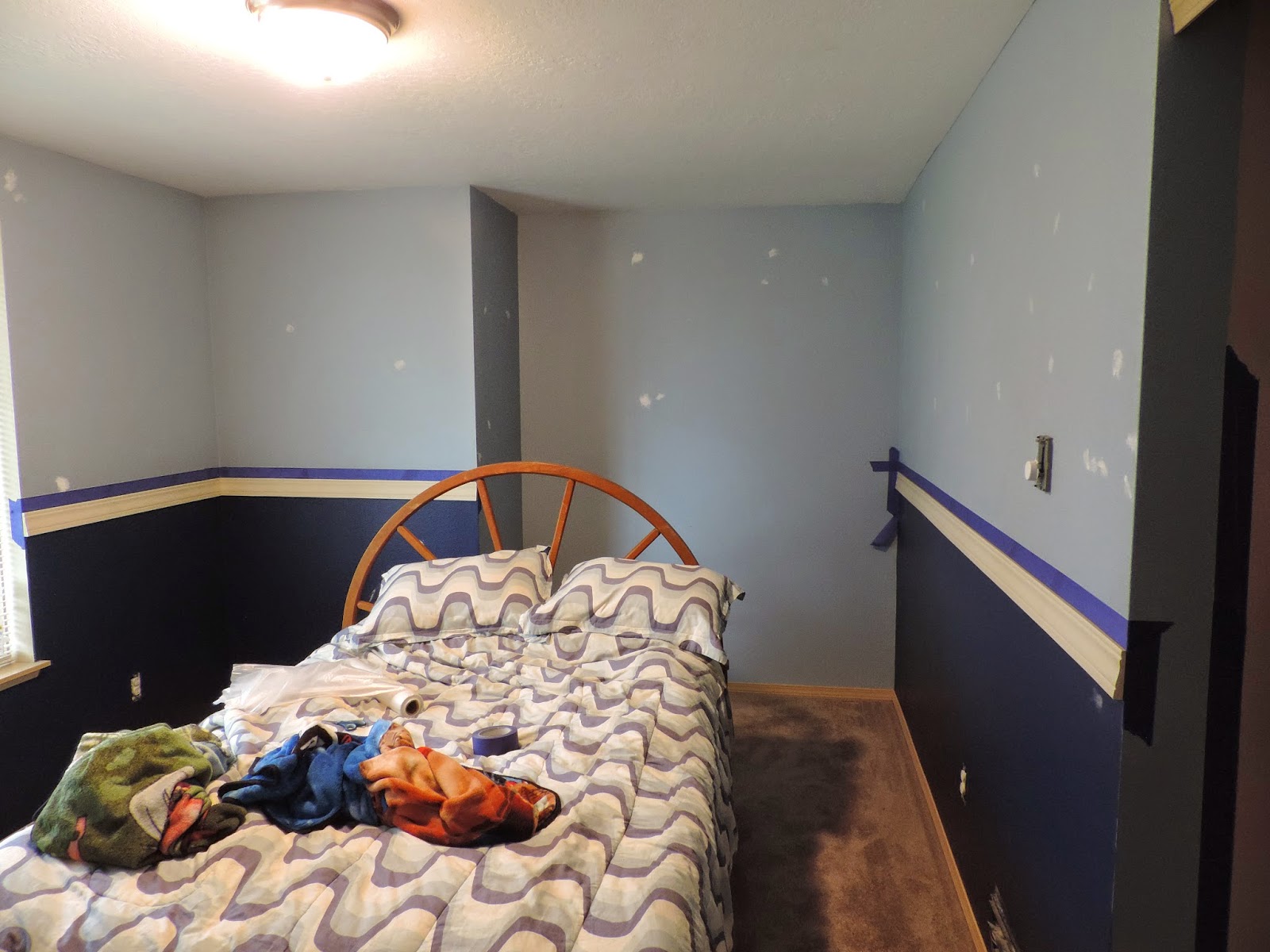 The before and afters... From a pirate wonderland to WWE. We are excited to begin decorating Britt's room, and he is thrilled with how it turned out. I'm so glad - it ended up being a much bigger project than I had anticipated it being, which put me behind on a couple of other things, but that's okay. Britt was so patient and helpful throughout the entire process, and he deserves to love his room. 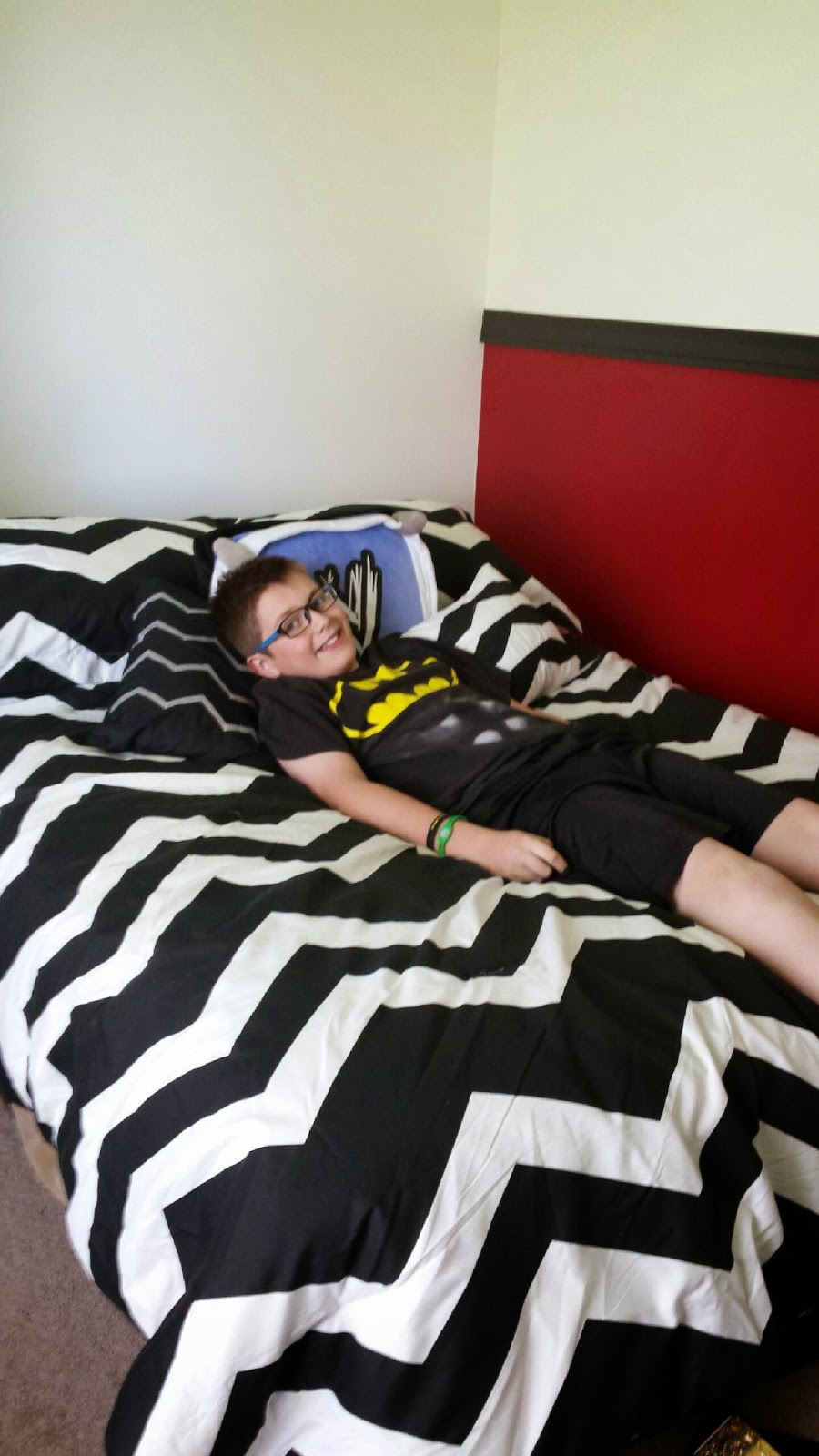 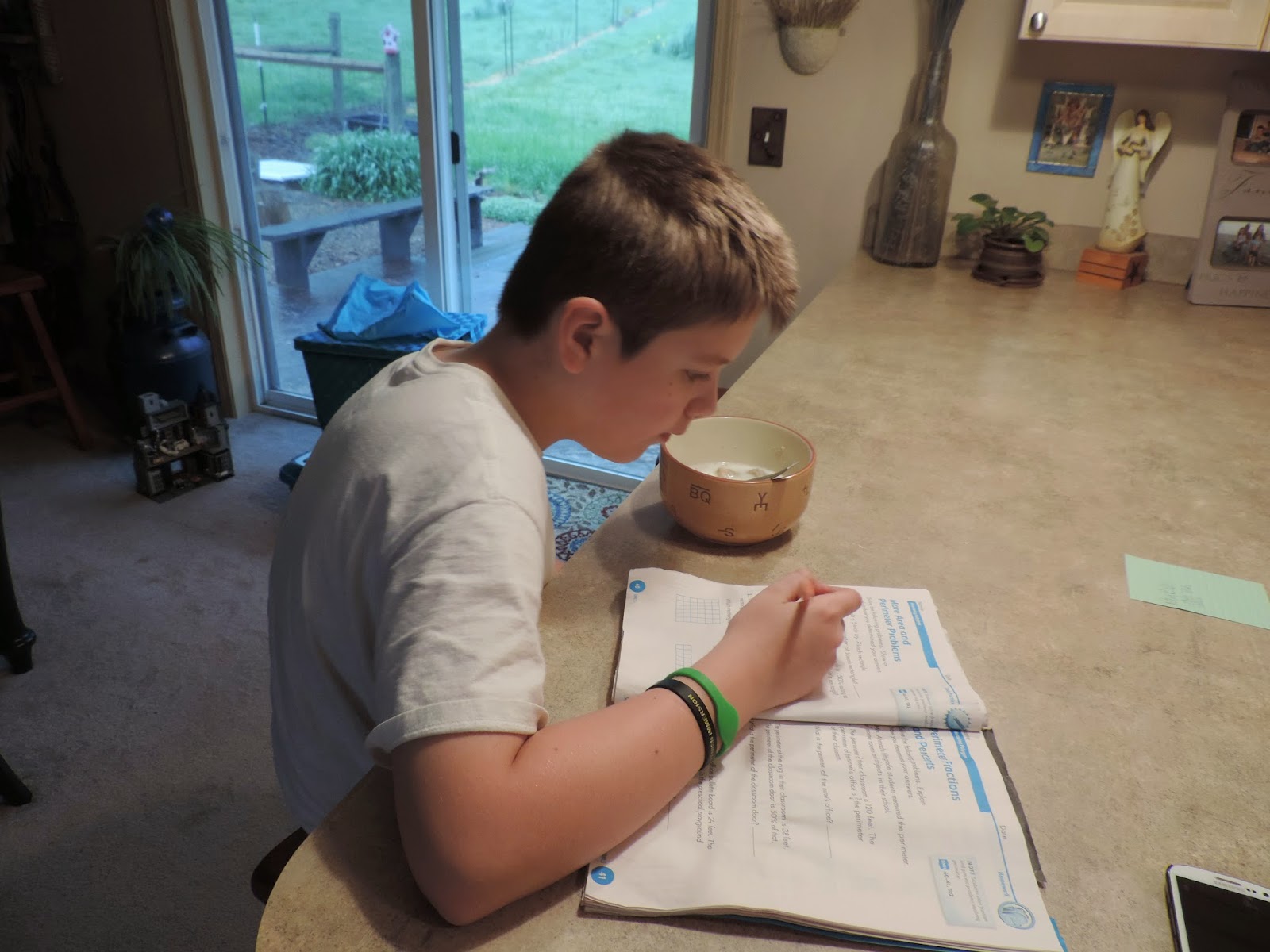 Britt took one morning of his break to do an entire math packet that was sent home as optional. And they both made homemade Easter cards. Brailey really got in to hers, and they turned out incredibly cute! 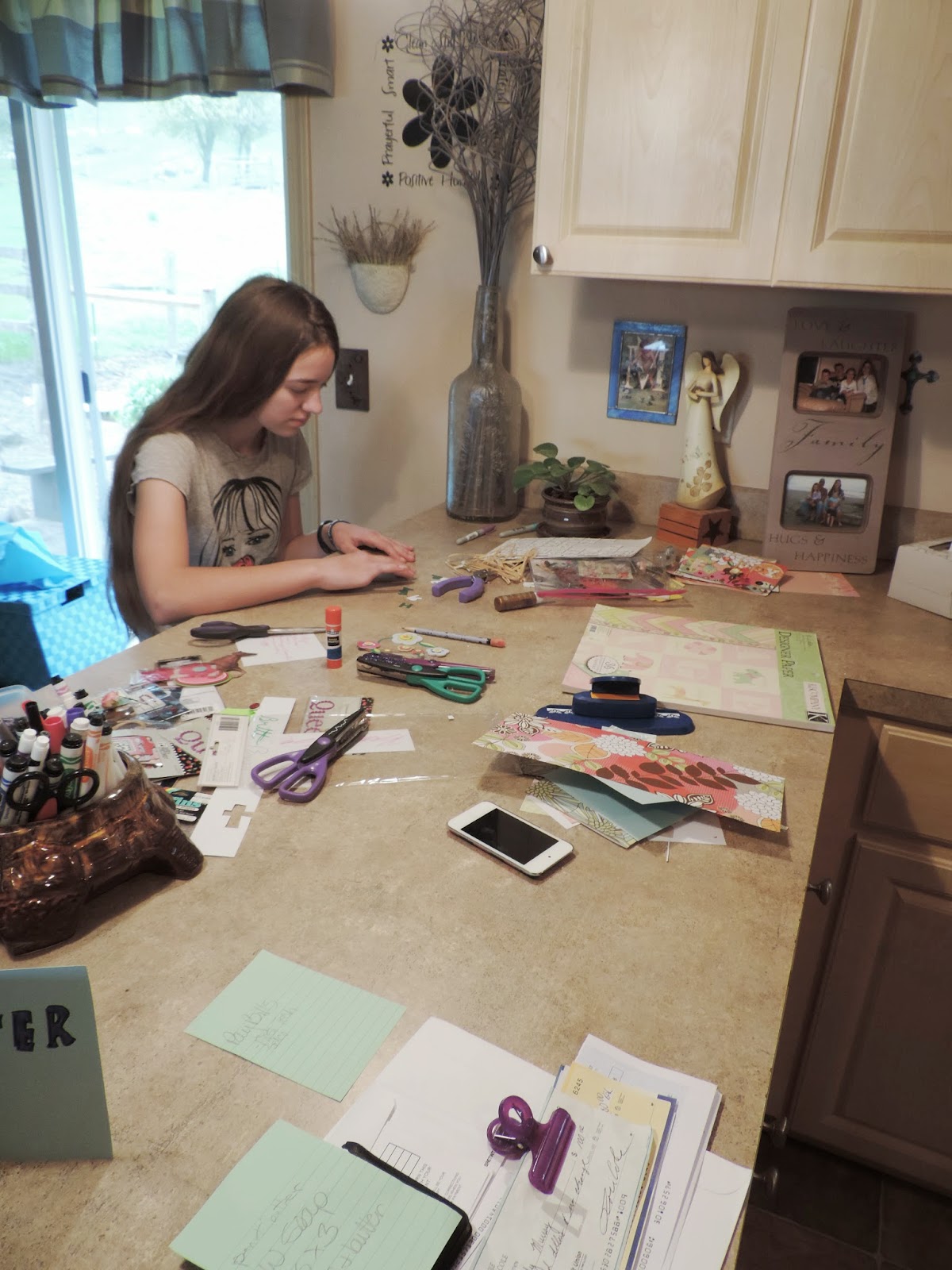 She also made some fun tee shirts that she found on Instagram. She cut up some of Brady's old tees and made them into fun new shirts for her. This took a lot of time and patience, but she loved every second of it. 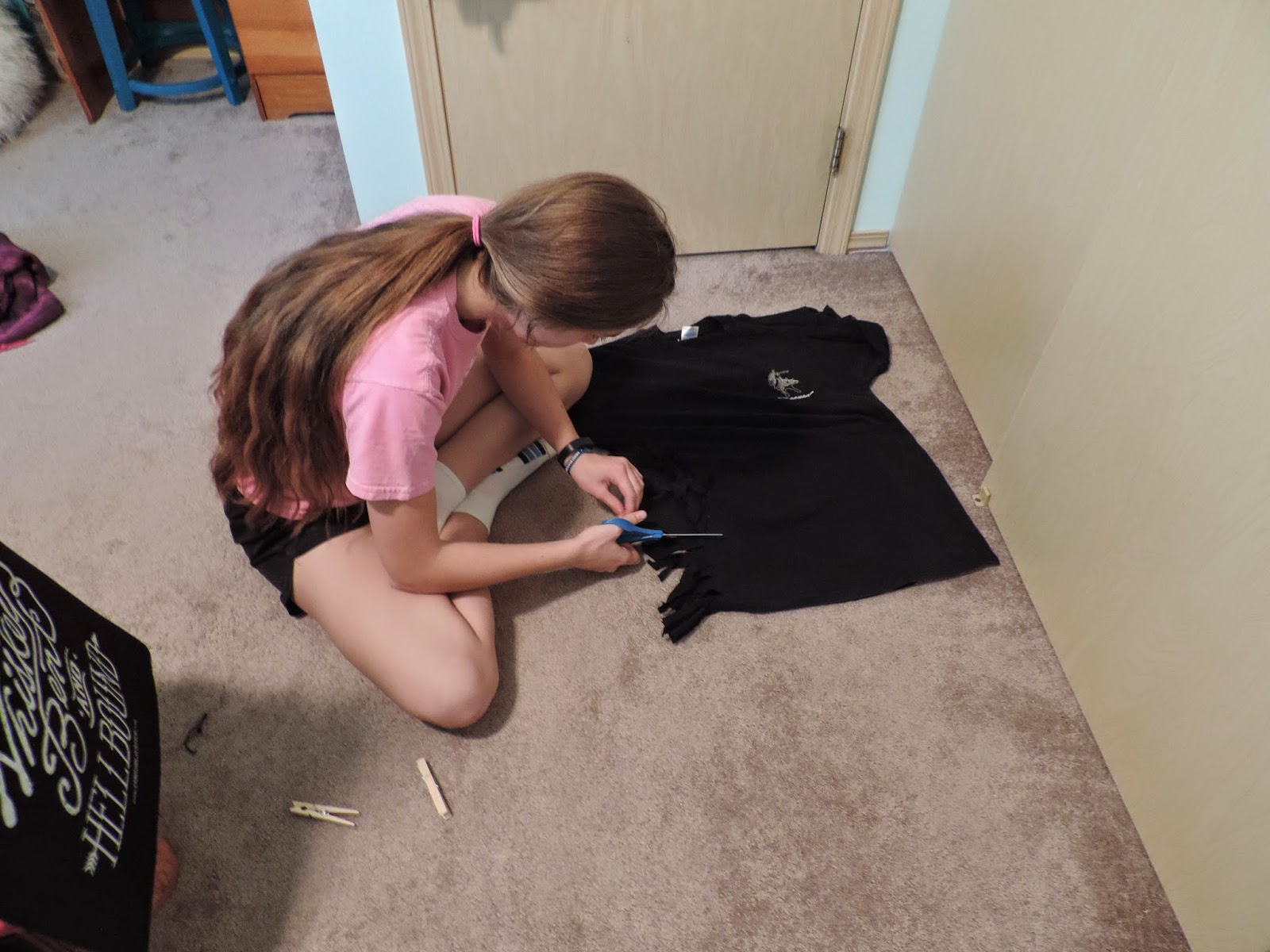 And then it was HER turn to have a day with a friend. For the first time, I dropped her and Isa, one of her dear friends from previous years of volleyball, off at the mall and then took them to the movies. They had a wonderful, fun, exciting time and got to reconnect with each other. And they were totally fine on their own at the mall. They are both very responsible, kind and sweet. It is important to make time for friends - especially the ones you don't get to see very often. 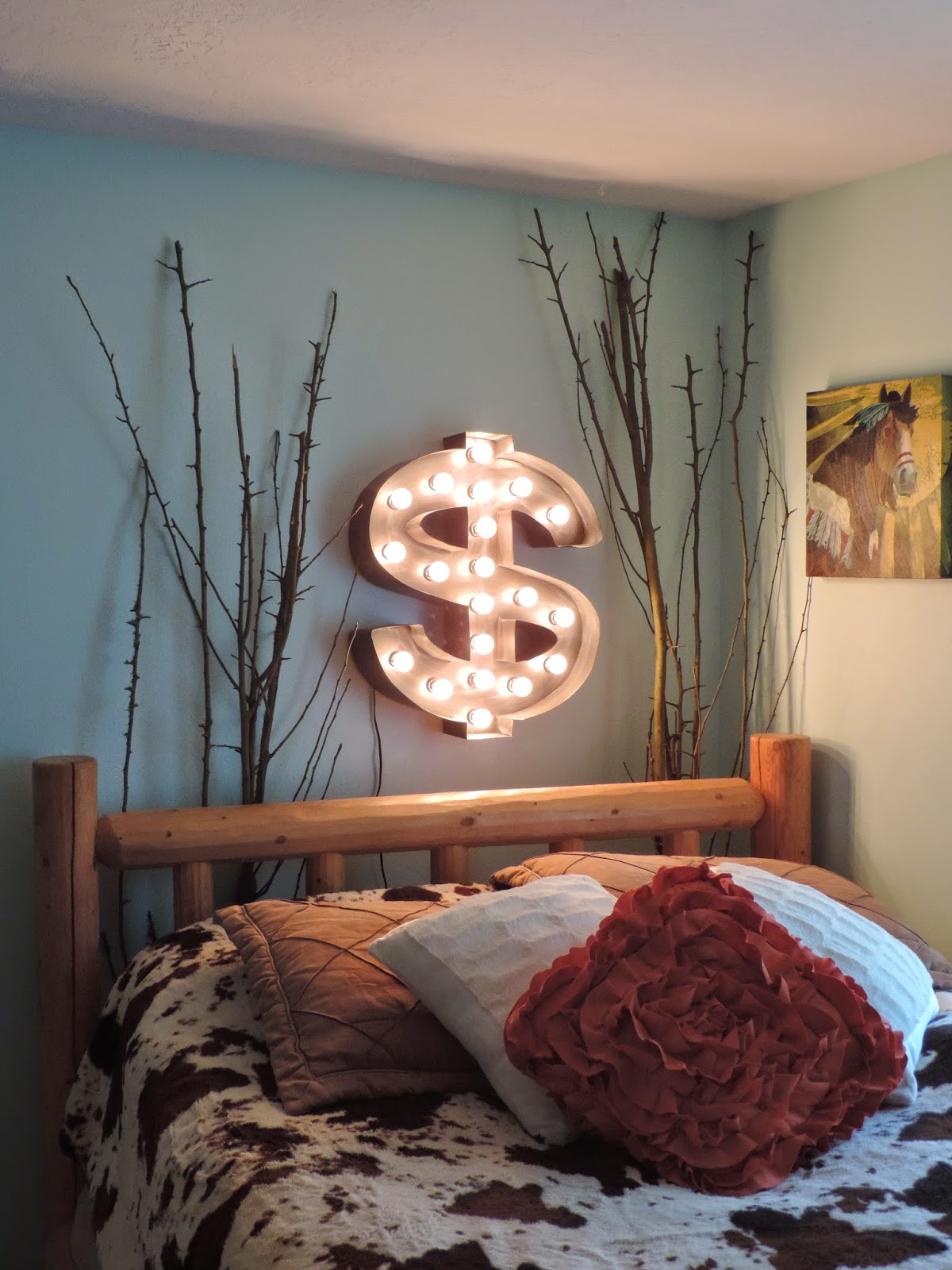 And that brings us to yesterday. We found the most PERFECT set of limbs to add the finishing touches to Brailey's room. I love how they turned out! We may add some little lights to the limbs, but I think they look just as good like this, don't you? And below, Britt running down the hill yelling while Brailey closes the gate. They had just turned the horses out. It was a beautiful Palm Sunday, also my mom's birthday (read more about this in my previous blog post (Palm Sunday and Lent 2015 - The Struggle Is Real). We are so thankful to have had a week to get caught up, to decompress and to do the things we've been wanting and needing to do. Now we are rejuvenated and ready for a fresh start, which is what spring is all about, right? Hello, Spring 2015! 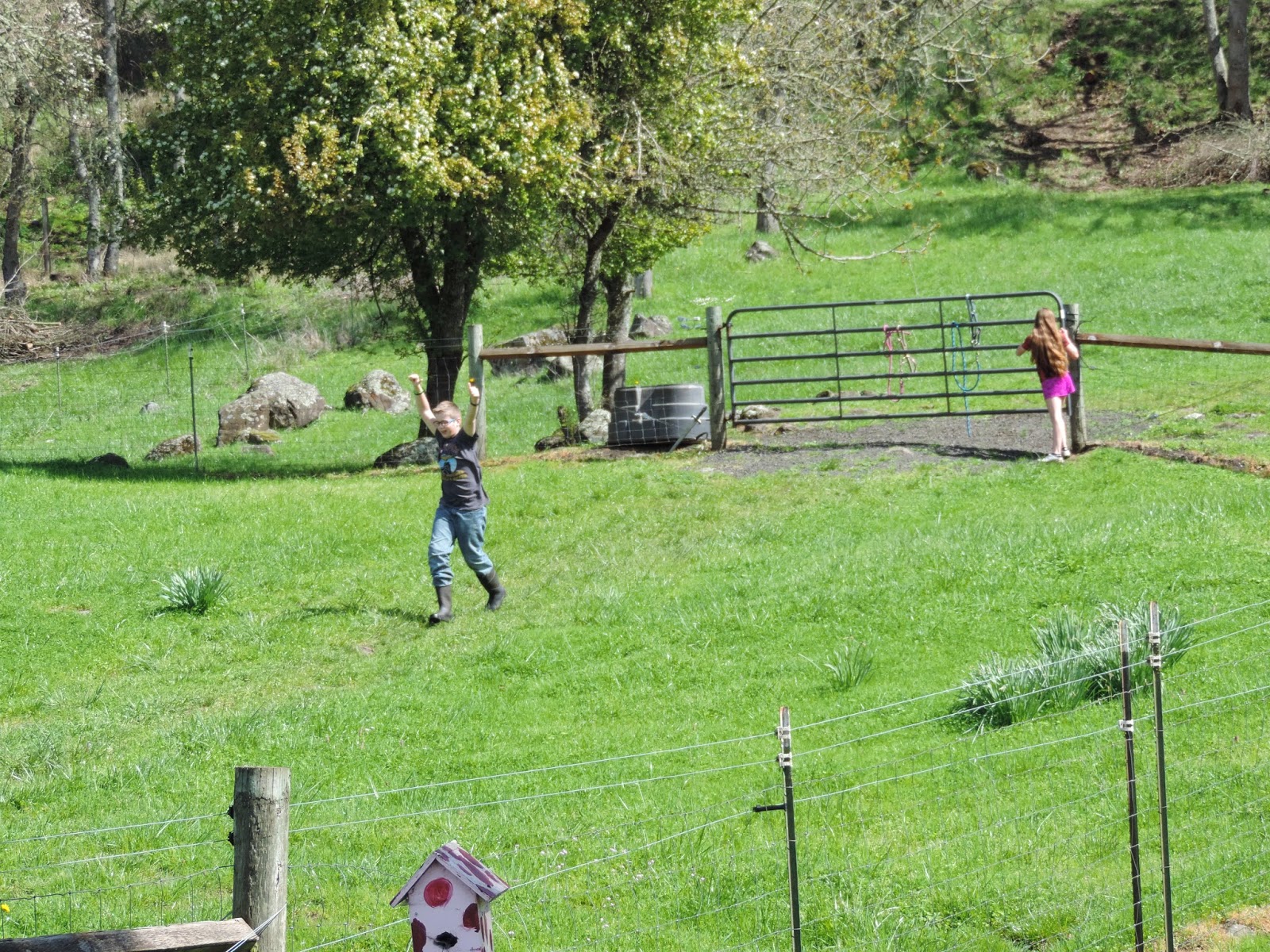