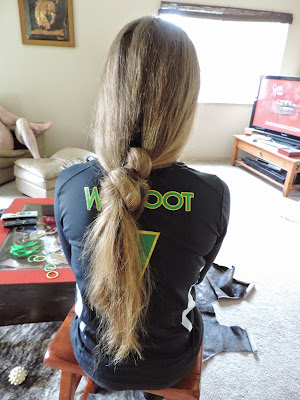 Our Marathon Weekend of swimming and volleyball was mostly volleyball. Papa fixed Brailey's hair for her before we left the house - the same knot he used to tie in her horse Tex's tail. Too bad it wouldn't have lasted - it actually looks quite pretty, doesn't it? 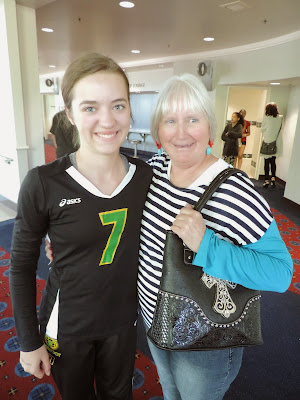 And we arrived! We were all happy and perky, at this point. This year was quite a bit different than last year, because we ended up in the PM Wave, which meant we didn't start until 3 in the afternoon. Last year, we were the AM Wave and done by early afternoon. There were over 250 teams at a time in the building at 50 different courts at each Wave - it is a volleyball lover's paradise! 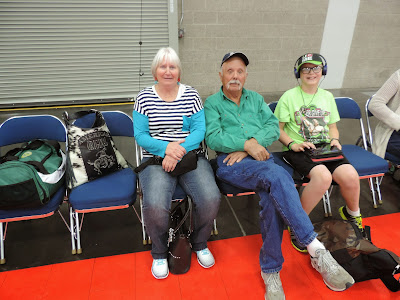 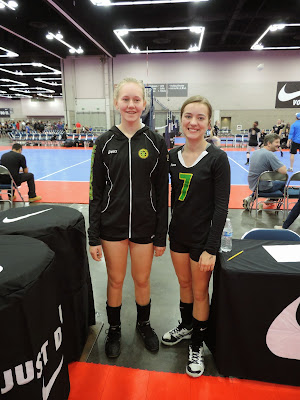 Bray and Sydney. These two go to school together in addition to being on the same team this year. They are both super shy and really sweet! They have a good connection on the court, since Sydney is a hitter and Brailey is a setter. It is a joy to watch them! 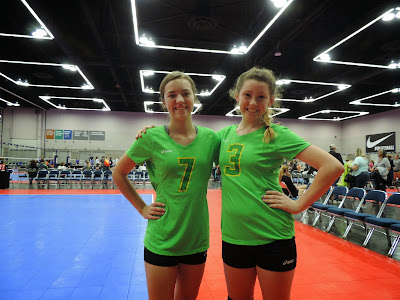 And here we have Brailey and Nikki - Saturday was Nik's 13th birthday! She and Brailey are the youngest on the team, and they also played together last year. They have a good time together and have really bonded this year. Both of them are so fun to watch - they have come so far! 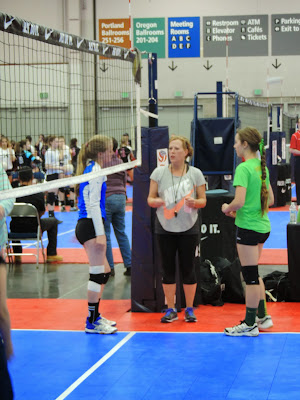 EXCITING! Brailey got to be the team captain for the first game! 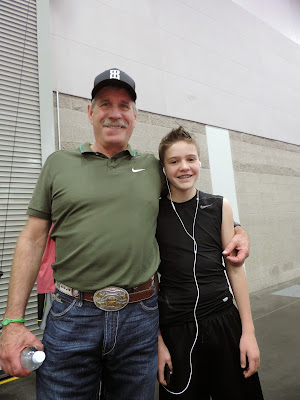 And look who we found?! One of our favorite players from another Webfoot team, Noah. He is Brailey's previous coach's son (from Kidsports - remember David's Dream Team?). He came over in between his games to support this team, even though his girlfriend wasn't there - she is on our team, but was at a soccer game and came for the later games. He sat with Brady. We love this boy and his family dearly - his mother is one of my favorite people in the world! And his dad will always be Brailey's favorite coach - she loved playing for him. 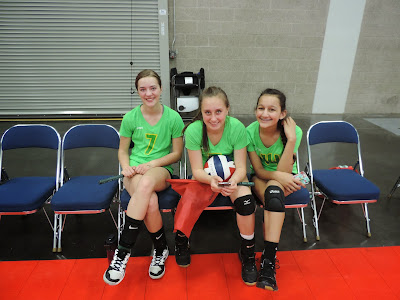 Brailey, Nicole and Savannah after a tough loss the first game, which went to three sets. It was a heartbreaker. But look! They're still smiling! 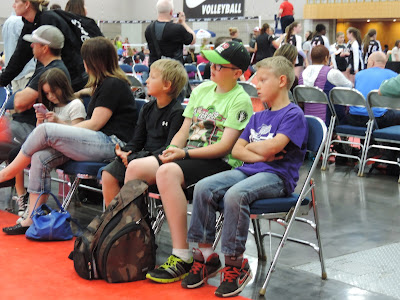 Britt met these two boys during Brailey's Kidsports season - they are the little brothers of one of her dear friends, Megan. The oldest one, Ian, just had his First Communion Saturday morning. SO SPECIAL! Britt had a great time playing with them all weekend long. Britt is really good with all ages of kiddos - these two are seven and eight. They were The Three Amigos! 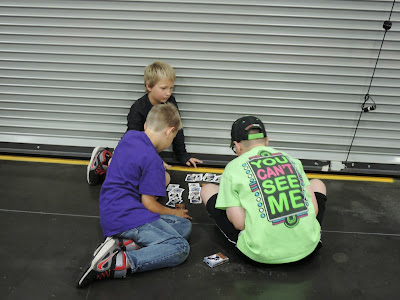 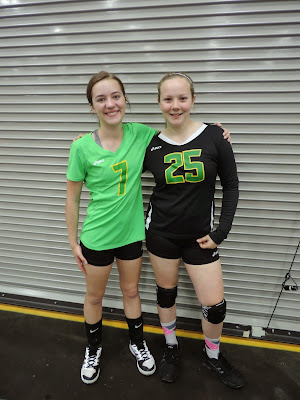 And speaking of Megan, here she is! I love these two girls sooooooooooo much! They are going to play sand volleyball together once the Webfoot season ends. I cannot wait! They are going to have so much fun together! I do wish they were in the same grade, but they are still great friends, and as all us "old" people know, age really doesn't matter. Megan is only one grade ahead of Brailey, so in another year, they will be at the same school. 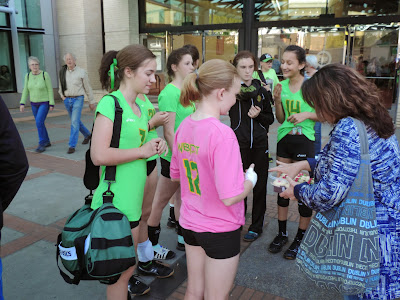 Nikki's mom brought cupcakes to help celebrate her 13th birthday - there were red velvet and absolutely DELICIOUS! The girls sang to her, and right after they finished, another team started singing to one of their players who was also having a birthday treat, and so our girls joined in on that one, too. Fun! After that was over, a strange mom said to my mom, Britt and I, "It's actually my birthday today, too." May 2 is a popular day for birthdays, apparently! 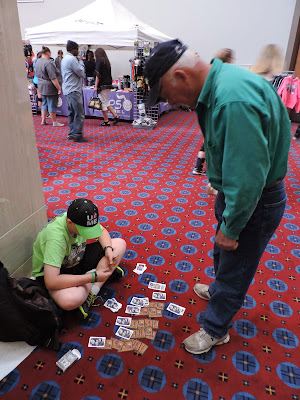 While we stood in line to get Brailey a shirt made to commemorate the tournament, Britt and Papa passed the time by playing Solitaire. Hey - you've gotta do what you've gotta do to pass the time, sometimes, right? 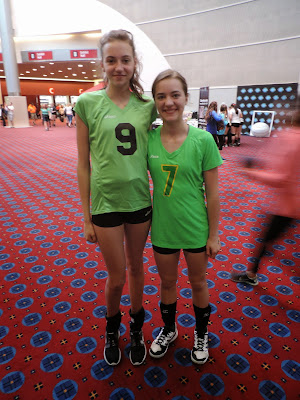 This is a 6'2" girl from another team we met in the earlier games who found us in the shirt line. Her name is Kapio, and she is a super sweet, fun girl that Brady and my dad befriended while she was line judging. Brady started calling her "Legs." Then she started showing off for Brady and my dad, showing them how she could just stand at the net and reach over the top of it - it was so cute! I told her Brailey was jealous of her height and wished she was that tall, and Kapio said to Brailey, quite vehemently, "No you don't!" What can we say? The grass is always greener, isn't it? (Stay tuned, because you will see Legs in the next blog post, as well...) 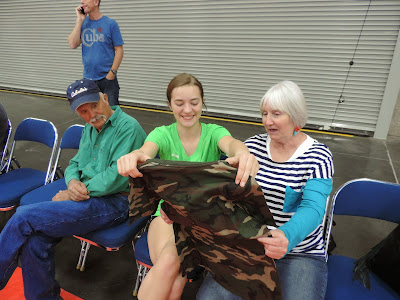 Admiring her new shirt. She decided not to get a sweatshirt this year, since the one she got last year still fits. This camo tee is super cute! 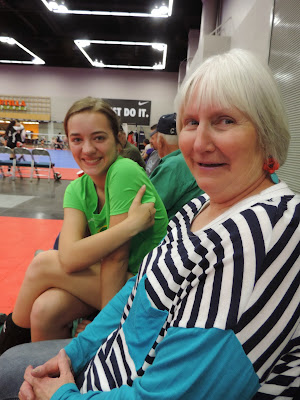 Brailey spent every spare second she had with Grandma or Papa, but mostly Grandma. She was never far from her side! Grandma gave her lots of moral support the entire weekend. Special moments... 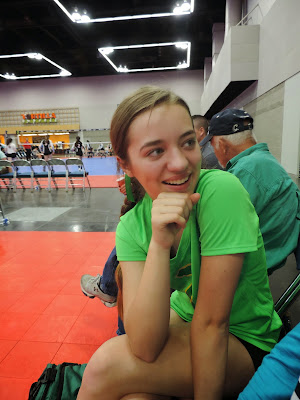 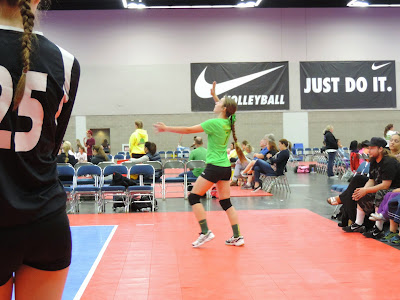 And that's a wrap on Day 1 of volleyball. Stay tuned for Day 2, where you will see the heart of the tournament as far as pictures go. SUCH A SPECIAL WEEKEND! I'm so grateful to have the photos to help us remember. These are the days!
at May 06, 2015