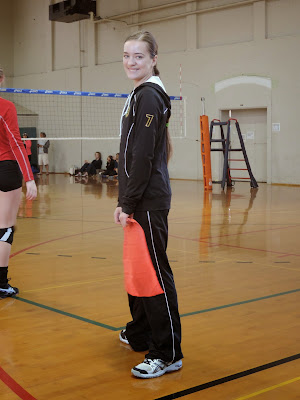 And so after a late night from Fiesta, we got up early Saturday morning for Brailey's last volleyball tournament of the year with her 13 Silver Webfoot team. It was held on OSU's campus, and we were a little nervous about finding our way to where we needed to be, because we didn't have Brady with us, and there were several locations that they played in. But our GPS took us right where we needed to go (for once!), we found excellent parking, and both days were fun. Saturday, we had two waves of play - morning and afternoon. They played well in this tournament, and came away with five wins out of seven games. Not bad! 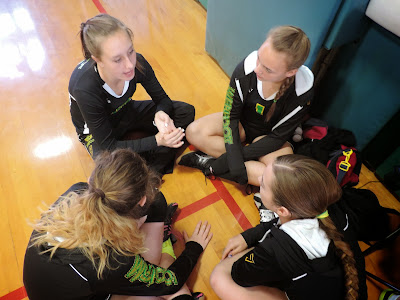 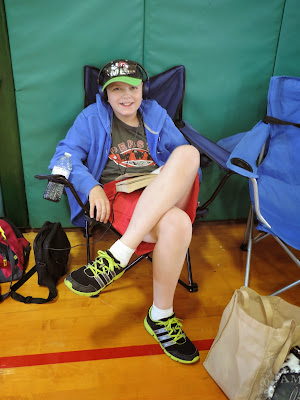 The first building we were in for the morning wave of play was very old and the whistles were SO LOUD, my ears rang the rest of the day. Britt put his headphones on his ears while he was reading, just to try to help block out the sound. It was a relief to get out of that building! 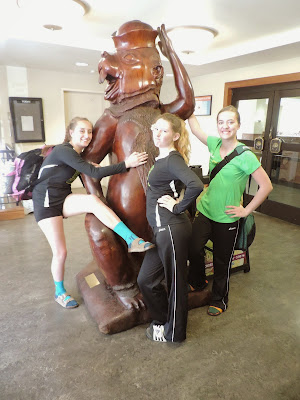 We had a great lunch with two of her teammates and one of their moms and one of their dads. We followed the dad's nose, and he led us straight to Panda Express, one of Brailey's favorite places to eat! They each had a fortune cookie which had fun fortunes that were ironically applicable to volleyball, so I suggested they put the little papers in their bras for good luck in the next games, which they thought was hysterical, but they happily did. It was hilarious how each fortune was perfect for volleyball! This made them giggle and smile several times in the afternoon, which is just exactly what these sweethearts needed. 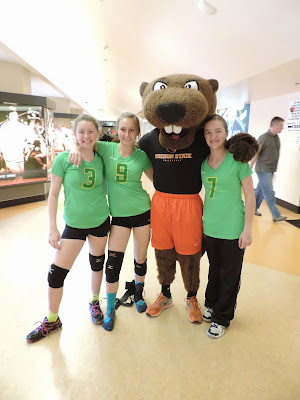 For the afternoon wave, we were in Gil Coliseum, and look who appeared?! Even though we are die hard Duck fans, it was fun to get pictures with the Beaver. After all, when is that ever going to happen again? Probably NEVER! Plus, the girls had their Duck colors on, so it was all great fun. Britt wanted to wear his Duck shirt the next day, but I told him not to because it is a bit disrespectful to wear a Duck shirt on the Beaver campus. I'm still big on sportsmanship, even though I have been sorely tested by many unsportsmanlike Beavers over the years. Hopefully my message of sportsmanship and respect will come through. 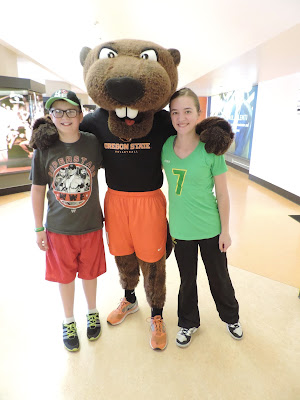 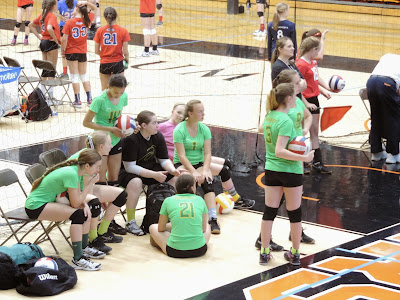 It was fun to be higher than the court and looking down onto the play. 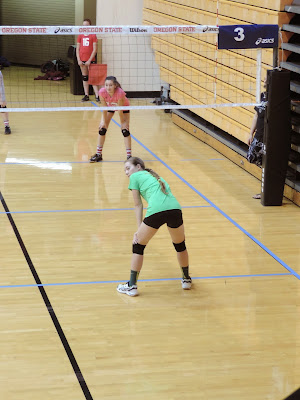 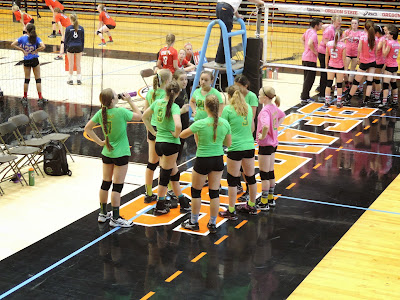 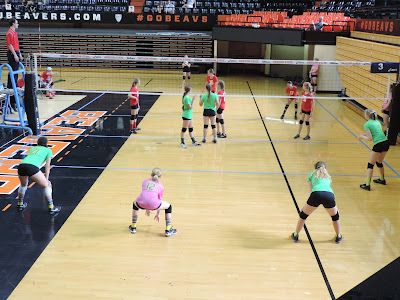 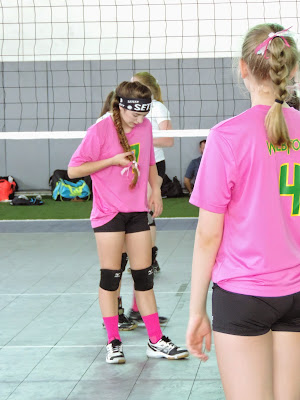 On Sunday, it was an even earlier wake up call and arrival time, and it was all about pink for Mother's Day! Our Team Mom made all the girls adorable pink ribbons for their hair. Brailey was thrilled! Above, you see her checking her ribbon out. 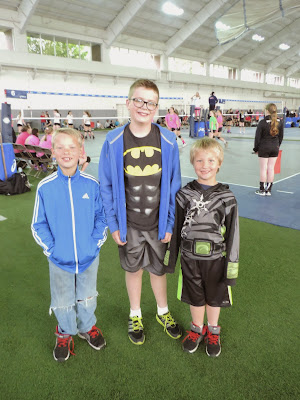 We were in the Truax building on this day, and look who found Britt? I was working for a couple of hours in the morning, doing garbage duty with another team parent, and so a couple of dads from our team were in charge of Britt while I was busy. These are Megan's brothers - you might remember them from the Regionals pictures. I was on the other side of the court from Britt when I saw them, and they must have been looking for him, because they spied him clear across the court and made a beeline straight for him! It was so cute! They played together for most of the morning and had a big time. And the two dads helping me keep an eye on Britt made sure they knew exactly where they were playing, which was a huge relief to me, considering the three of them went missing for a brief time up in Portland at the Regionals tournament the weekend prior to this (another cute story with a thankfully happy ending!). 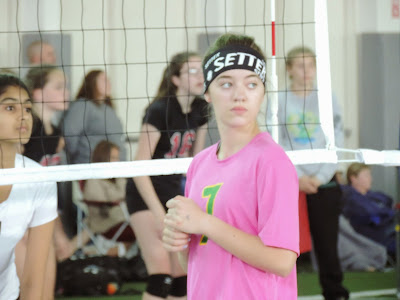 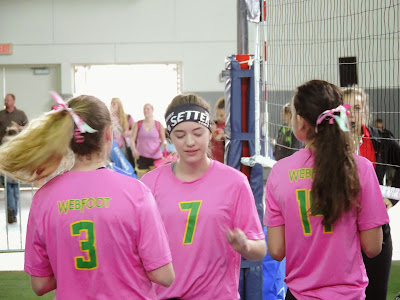 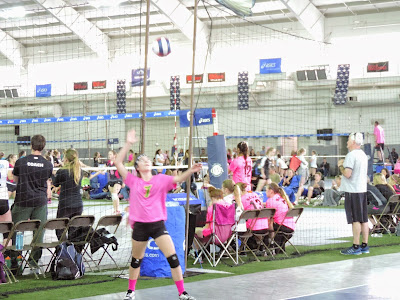 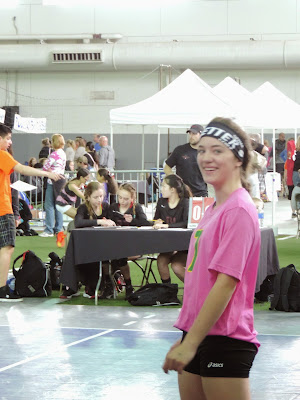 The final game... It was the best of the season! They won the first set, barely lost the second set and were losing the third set by a landslide. They were two points away from losing, and they made this incredible comeback and WON! These girls needed that win badly, and they fought for it and they got it. It was FANTASTIC! I can't think of a better way to end the season. 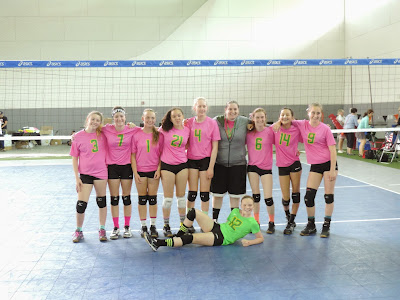 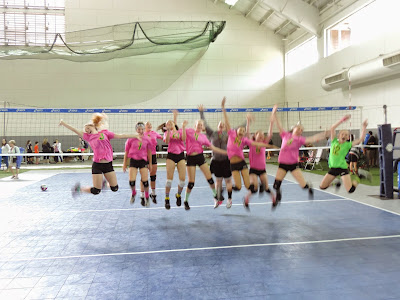