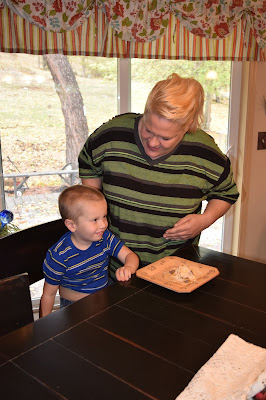 After a Late Night Gab Fest the Saturday before with Aunt Suezy and JoAnn, we had a an impromptu Sunday Taco Feed with her four grandkiddos. It was a blast! Above, Suez and Evan. This little guy is such a cutie! Below, JoAnn helping the other three with their tacos. 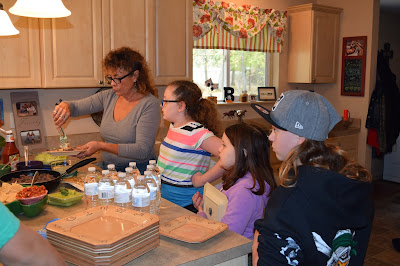 Poor Brady... As you can see, he is very sweaty in this picture. Ironic story. The last time Suezy was here was Labor Day weekend, and our toilet handle broke. Brady replaced it, but it never really worked to perfection. So he tried to make some adjustments, again when Suezy is in town, and the entire inside of the toilet came apart! So while Brailey and I were cooking, Britt and Brady were working on the blasted toilet. It was not an easy fix. But fixed it is, and now it works better than ever! I still think it is a cute picture of Suezy and Brady, sweaty shirt or not. 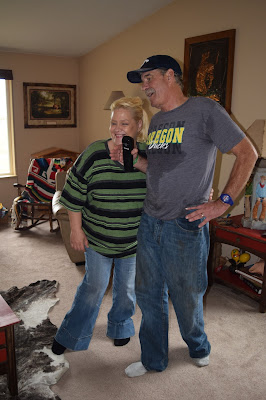 Aren't they cute?! They were all perfect angels and seemed to have the time of their life with us! Look at Evan's little grin. Precious! 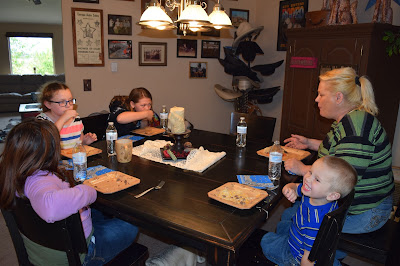 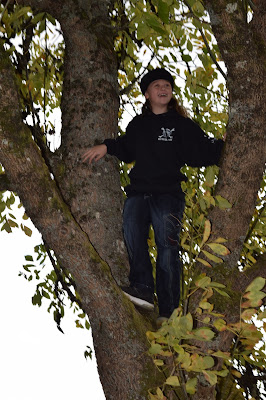 They had a big time swinging on the swings. And Koco climbed right up the tree! She is Suezy's daughter Sierra's little girl, and her name is actually Kyra, but we all call her Koco. She is a sweetheart! 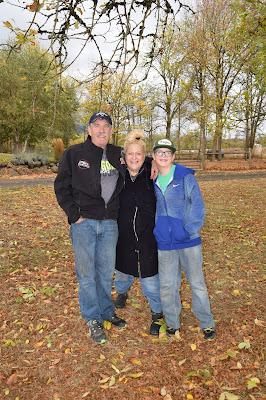 Suezy and the boys! We should have grabbed Evan for this picture. Britt absolutely adores his Aunt Suezy. She managed to take him by surprise and put a wrestling move on him while we were in the house - he was thrilled! 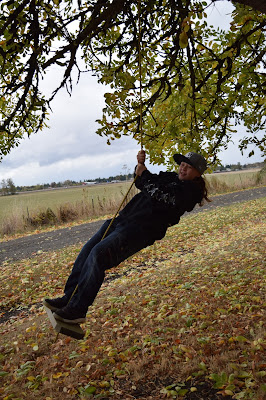 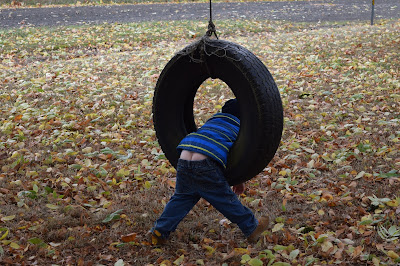 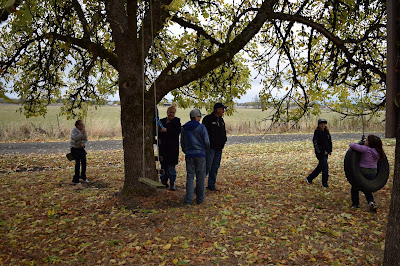 And after everyone had swung themselves out, we introduced them to the horses, which was very exciting for them. The two old guys were perfect gentlemen. 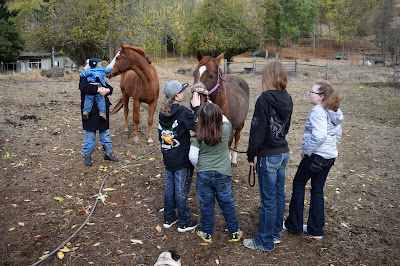 And below, one last shot before they left. With Suezy, one thing is for sure - it's always a good time! We love her so much - I think the 4 B's are definitely her biggest fans! Although truthfully, we have some stiff competition in Texas and her own grandbabies, of course! We loved every second we spent with her, and we wish we could see her more. Her dad and Brady's stepdad, Dick Murray, recently passed away, and she brought his ashes to Boone and Brady, along with several other wonderful mementos. She and JoAnn took care of him in his final days. Suezy has been watching over him for the past several years, but when things took a turn for the worse this summer, JoAnn came and helped her for the final three months. Brady and Boone were able to go down for a quick visit before he passed in September, and Brady said when he gets old and decrepit, he wants Suezy and JoAnn to take care of him, because they did such a fantastic job taking care of Dick. What they did is not easy, and we are all grateful to them for everything! Thankfully, their sister Cindy was able to come from Texas to be with Suezy and Dick in his final days, as well - she was such a comfort to everyone! Needless to say, the past few weeks have been wild for this family, but Suezy is a special, special person, and she handled it all with grace. It was wonderful to finally see her after everything she has been through and to give her numerous hugs. She is so beautiful, inside and out, and we are grateful from our heads to our toes to have her in our lives! I've said it before, and I'm sure I'll say it again - everyone should have a Suezy in their lives. 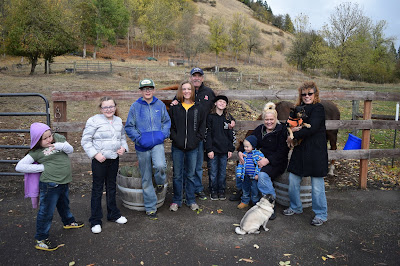