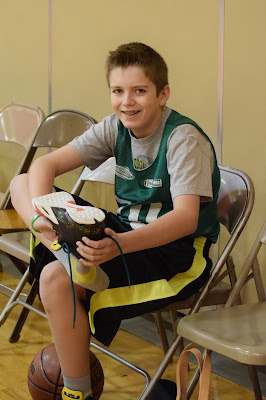 Oh my gosh this boy is so cute, I can hardly stand it! His face is adorable, expressive and fun to watch. He was thrilled to have his first basketball tournament this past weekend. Originally, another team had asked him to join their team for the tournament, so they could participate, because they didn't have enough players. But then, everyone decided to do it, so both the other team and Britt's team were in the tournament. 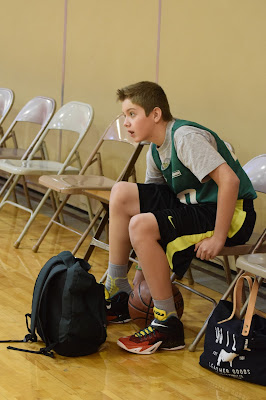 Our President's Day Weekend was spent at a volleyball tournament last year - all three days. This tournament was much smaller and a way better schedule. Four games total, which was perfect! Three games on one day, and one game the next day. I was reminded how tournaments are where kids really learn to play as I watched Britt improve from one game to the next. By the time the last game was played, he was really figuring things out, and it was so fun to watch! 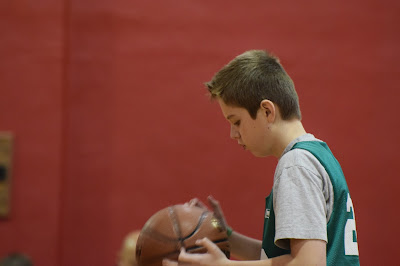 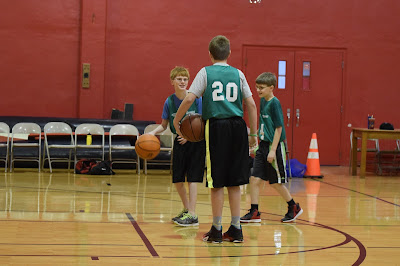 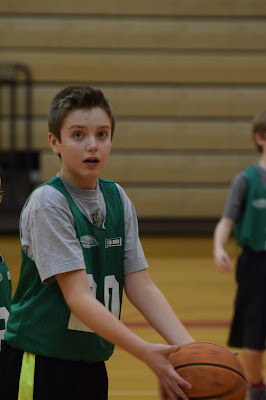 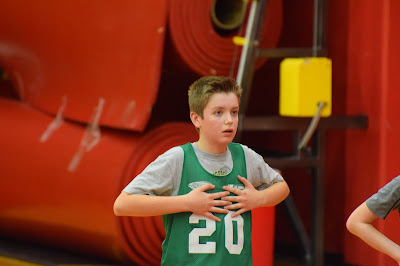 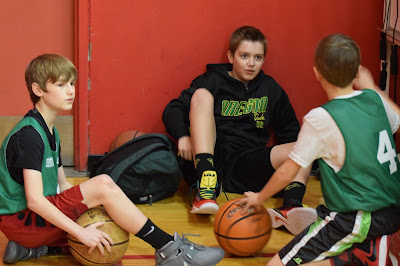 Ironically, his team and the other team that had asked him to join them ended up playing each other in the last game, which is why Britt is smiling and talking to the kid on the other team below. The two teams practice together, go to school together and are friends. One of the great things about basketball has been the new friends Britt has made. His team is so cute! They were all sitting in front of me talking, at one point, just having the best time with each other. None of them have cell phones. I have long thought cell phones and tablets should be banned for team members of swimming, volleyball, basketball or whatever sport. It is good for kids to actually talk and socialize with one another. It is also bonding for teams. I'm not sure why parents are so scared to make their kids go without a device. It's an interesting issue, and a hot one, too. In any case, it was so heartwarming to see Britt and his friends having fun with each other. I think if he had more of that kind of human interaction at swim meets, he would enjoy them more. (We don't allow him to bring his device to swim meets, but other kids do, so it makes things hard, sometimes.) 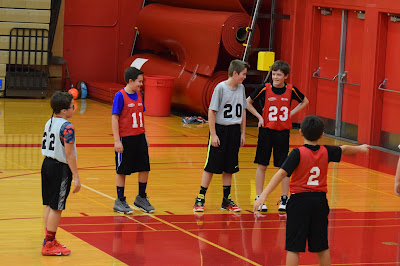 So far, basketball has been a really fun experience for Britt. He has learned a lot, this season, and still has a couple more weeks to go. Brady's brother, Uncle Boone, was able to come to his last game on Sunday, and that was special for Britt and so sweet of Boone. It was Britt's best game ever, and he met his goal of making a basket in every game of the tournament, so that was encouraging. He still has a lot to learn, but for a kid who is jumping in with kids who have played for much longer than he has, he is holding his own. Most importantly, he is getting good exercise, making new friends, learning some important life skills, and having fun. A win-win, even though his team rarely wins a game. Go Britt!
at February 16, 2016