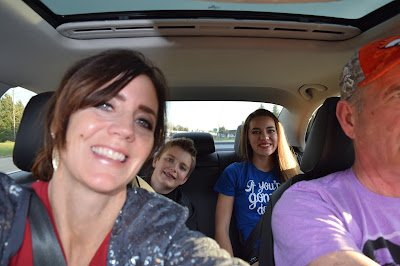 We had been looking forward to it since before Christmas - it was one of our main Christmas gifts, in fact. "It" being WWE's Thursday Night Smackdown, which if you are a WWE fanatic, like we are, then you know it is filmed on Tuesday. And so after a day packed with work and school, we zipped up the freeway to Portland. 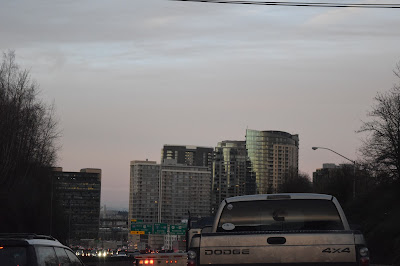 The traffic wasn't bad at all, and so since we had a little extra time, we went to Red Robin for a quick bite to eat before finding out seats. However, we made it with only a few minutes to spare, because everyone from the WWE Universe decided to eat at Red Robin. It was so fun to see all the other fans in their shirts and gear. Brailey and Britt look absolutely darling, dressed as Charlotte Flair and Dean Ambrose! Aren't they the cutest fans ever?! 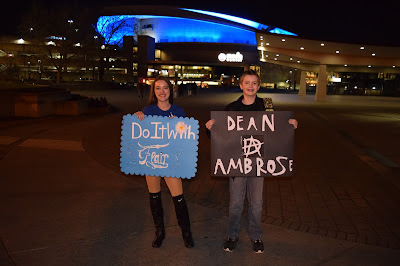 Brailey spent hours on her sign, while Britt threw his together in a flash - they both turned out fantastic! I saw their signs on the jumbotron several times, so I am sure we will be able to see ourselves on TV. If you are interested, Smackdown comes on USA at 5:PM on Thursday, PST. 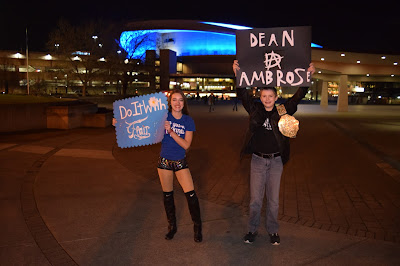 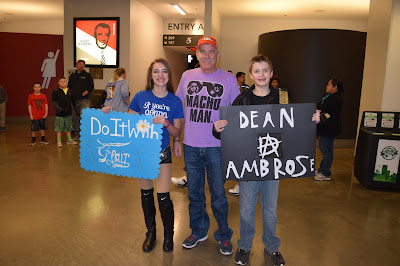 We truly had a wonderful time, even though there were a few flies in the ointment. We had excellent seats, on the floor. However, the seats weren't where I anticipated they would be. I specifically called the box office to get good seats, and I told the representative I didn't want to be on the floor, but the first row up near the floor. So that was a bit frustrating. But they were still amazing seats, and Brady had a ton of leg room! It was worth it for his leg room, alone, and we were able to stand up and move around and had plenty of room for our signs. In other words, it worked out perfectly. 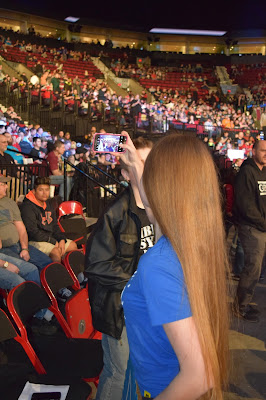 Brailey doesn't take a lot of selfies (thank goodness!), but I think selfies are definitely worth taking when you are at an event such as we were. 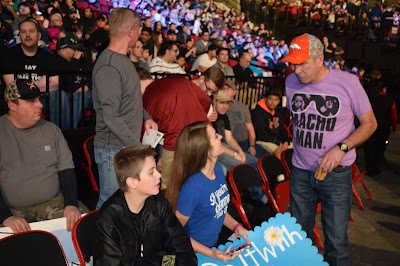 The WrestleMania sign was there! It was huge and incredible. WOW! 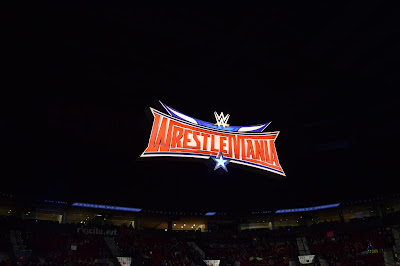 Brailey was on Cloud 9 the entire time we were there. Britt was, as well. The looks on their faces were so precious. Britt was rapt with attention while Brailey could not stop smiling. 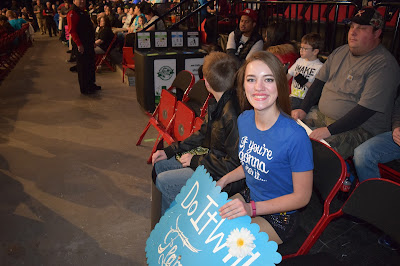 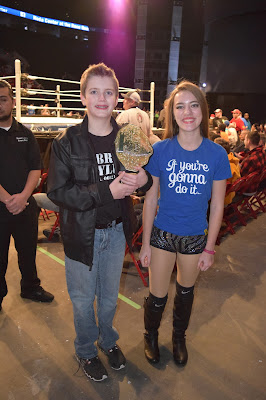 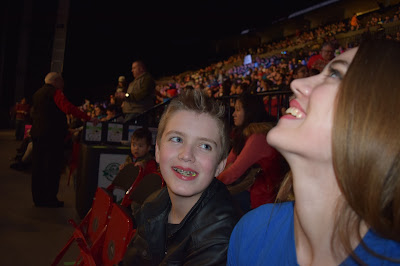 Of course Brady had to talk to everyone there, including the security personnel. He doesn't love wrestling as much as the kids and I do, but he still managed to have a good time. And he looked dashing in his Macho Man shirt with his Broncos hat. 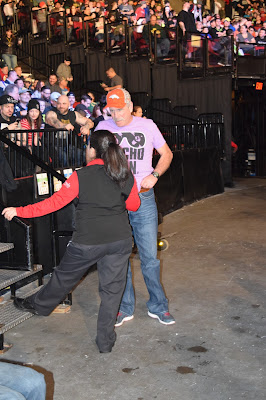 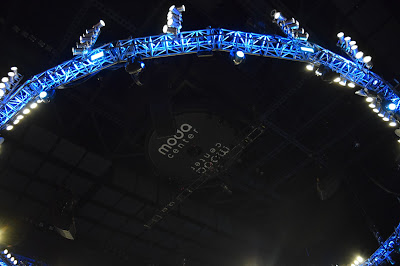 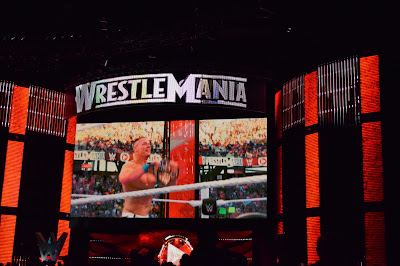 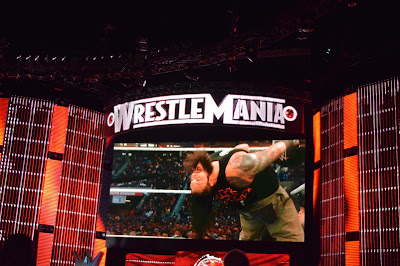 The first event included some NXTers. Carmela and her boys (their name escapes me - I will have to ask the kids and edit this part). There were good ! They wrestled a couple of local guys. 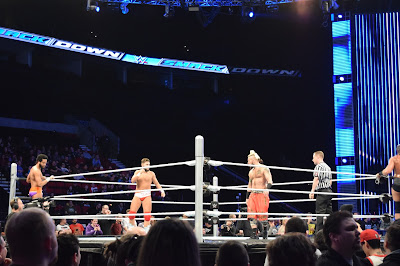 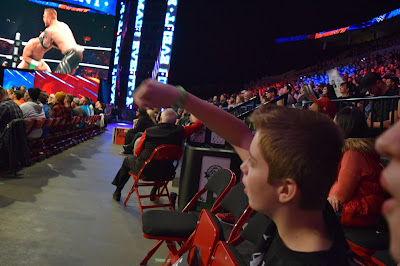 And then came two of our favorite divas, Natalya and Alicia Fox! Brailey is one of Nattie's biggest fans - she loves her so much! We all do, actually, and it was a great match, because she WON! We cheered so hard for her! Her smile is infectious and she is an amazing personality. So cool! 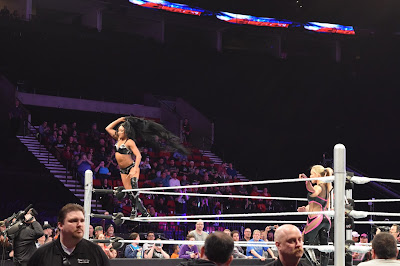 Sadly, one of our most beloved wrestlers, Daniel Bryan, retired the night before on Monday Night RAW in Seattle. They played footage of this and it was very touching. I had to choke my tears down. These guys work so hard at what they do. It was heartwrenching to see him forced to retire at an early age. If you watch Total Divas, he is married to Brie Bella. 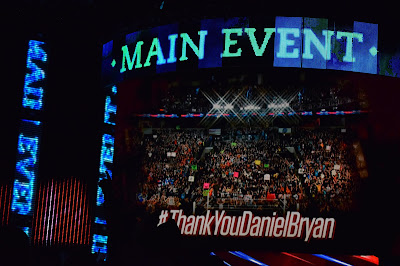 Brailey's sign was double-sided. Below, they are both holding them up. This time around, we were veteran fans! We knew how to dress, what to bring and how to act. It makes the experience even more fun when you get into it like that. 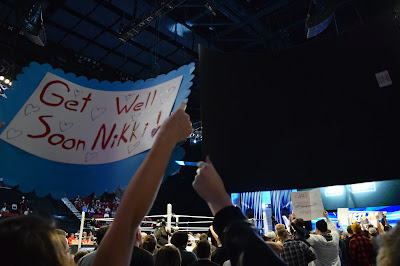 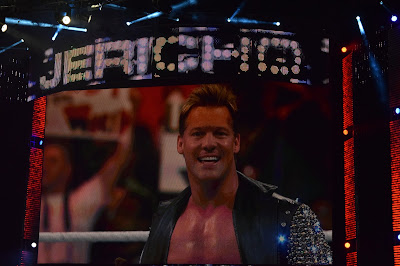 The star of the night was Chris Jericho, Y2J. I have always loved him! I wore my sparkly jacket in honor of his trademark jacket that lights up. It was way prettier in person - the camera takes the sparkle of the jacket away on TV, but in the ring, it is dazzling! He is such a class act, and it was fun to see a legend perform. So many of the big superstars are hurt right now, they had to bring him back out of retirement (we suspect). He isn't as fit and trim as he once was, but he still has it. He was on fire last night, and amazing in every way! I am positive he heard Brady cheering for him. And speaking of yelling, people were yelling out "Wooooooooooo!" before the show and in between segments. At one point, Brady's "Woooo!" started an entire round of it, and it was a good one, too! "Wooooooooo!" That is Ric Flair's trademark chant, and now his daughter Charlotte uses it, as well. 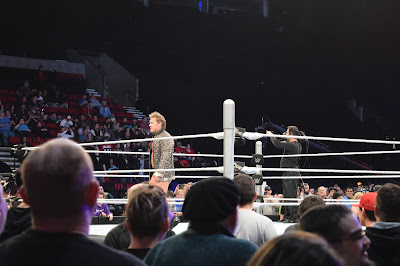 We saw the Wyatt Family... Creepy! But still fun. We were bummed we didn't get to see some of the bigger stars, like our favorites, Roman Reins, Dean Ambrose, Charlotte and a few others, but we still had the time of our lives. When we went a couple of years ago to RAW, we were so fortunate to see practically ever single character at that show. Next time we go, we'll make sure it is a Monday Night RAW event. And some day, WrestleMania is on all our bucket lists! 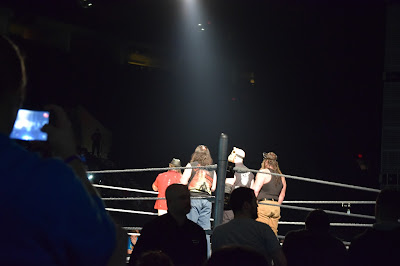 All good things must come to an end. We were sad to leave, but grateful we had such a good time. We will never forget our special night at Thursday Night Smackdown. Hopefully we will see ourselves on TV! Wooooooooo! 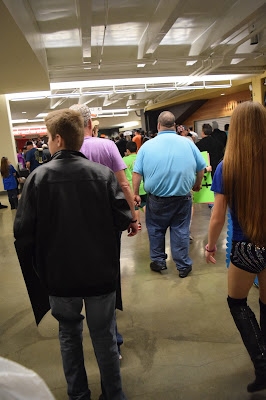