The Donald Trump Train Comes to Eugene OR 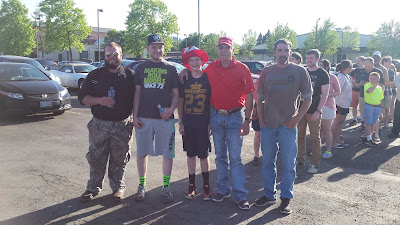 Yes, it is true - we are huge Donald Trump fans! Guilty as charged. I know I said I would never share my presidential candidate, but I've also never been so completely obsessed with an election, which has been an election like no other. This is a special election year, no doubt about it. I digress... Despite being ridiculed, heckled, bullied and frowned upon, our family is proudly on Team Trump. We were so excited when we heard he was coming to Oregon! Thankfully, we were able to get tickets. The only unfortunate circumstance was the fact that Brailey had dance tryouts that night, so it made our timing a bit tricky. But it was meant to be - Brady, Britt and I dropped Brailey off at dance, and then, even though we were much later than most folks, we unbelievably found the most perfect parking we could have found! We opted to park a few blocks from the venue and to walk to the facility. Little did we know there would be protesters all along our avenue to the entrance gate. That was an experience, to say the least! We've never experienced protesters in person, before. They were allowed to be right along the path and directly in front of the entrance gate, and I have to say, it was a bit terrifying. I have never directly experienced such hateful, mean, vicious and frankly, stupid people. They targeted Britt, and got way too close for this mama's comfort, yelling at him to disobey his parents, to rebel against us, not to ruin his life by supporting Donald Trump. There were profanities everywhere we looked, on almost every sign. One lady who was so creepy she literally resembled a witch from an old Grimm's fairy tale got so close to Britt, she actually spewed spit on him. It was disgusting! I told her to get away from my kid. These people have no moral code. Do they really think they are going to change anyone's mind? It is utterly mind boggling. One kind man said to us right as we walked in, "I'm really sorry these people are yelling and screaming at you. I'm not a Trump Supporter. I like Bernie. But I don't agree with how they are treating you." We told him thank you, and that we like Bernie too. After all, everyone is entitled to their opinion, and we respect others. To say it was a relief to be let in the gate is a huge understatement. I was shaking, my heart was racing and I felt short of breath. Almost as soon as we got in line, we met other nice people who had to go through the same experience with the protesters we did, and it was so nice to talk to nice, normal, kind people. What a relief! If felt very safe. We were literally locked inside the gates. Snipers could be seen on the roof of the Convention Center, as well as spotters with binoculars. 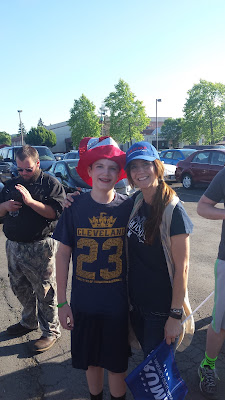 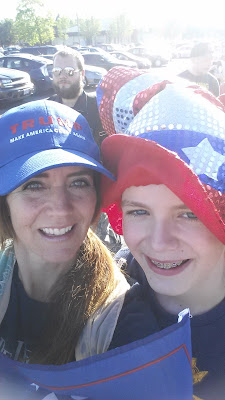 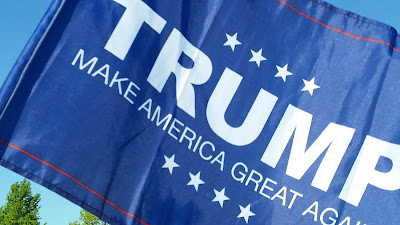 There were several vendors with lots of fun goodies. I actually got the pink shirt for me, but Britt loves it so much, I gave it to him. The weather was no less than perfect! We didn't even need jackets, which is really not normal for this time of year in Eugene. We are pretty sure we saw Mr. Trump fly in, with helicopters circling his plane as he headed for the airport. 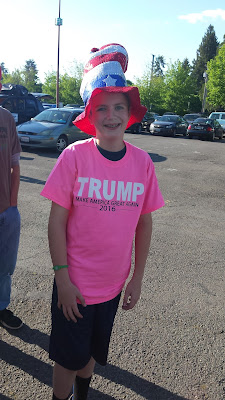 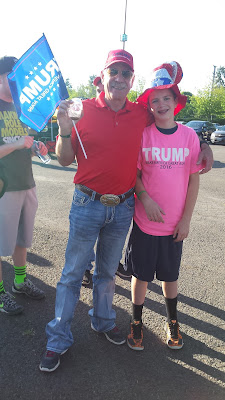 The line was long, but it went fairly quickly. There were a couple of guys behind us who came all the way from Roseburg. The younger of the two was worried we weren't going to make it in to the building, since we weren't at the front of the line. He worried the whole way, but in the end, it was for naught - we made it into the Convention Center just fine. 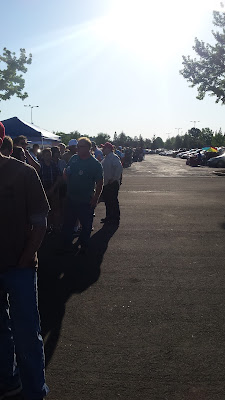 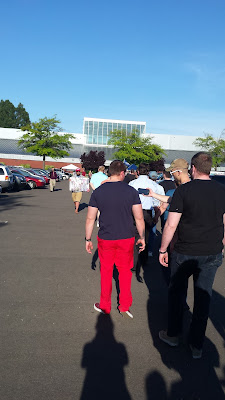 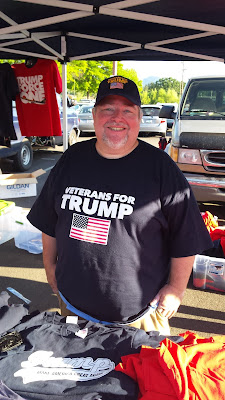 This kind gentleman is from Springfield, Missouri, and he travels to all the Donald Trump rallies he can make it to, selling shirts, buttons, hats and the like. I took this picture for my dad, who is a fellow veteran. 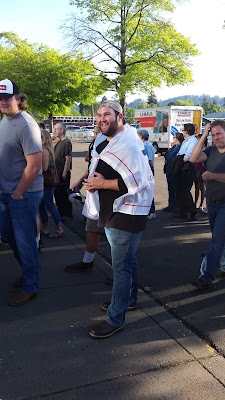 There were lots of patriotic looking folks. It was super fun to see everyone decked out! It was also fun to be with people who are on the same "team," and to be comfortable and proud of that fact, rather than feeling like a villain. 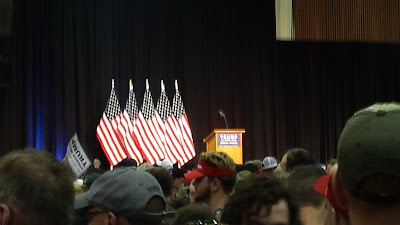 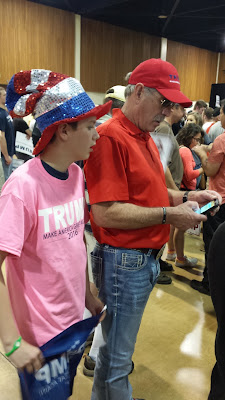 We were so happy once we finally made it in! 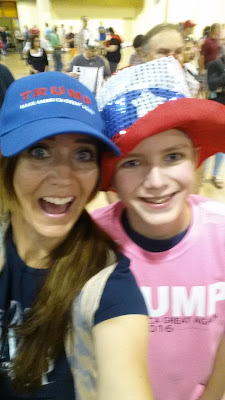 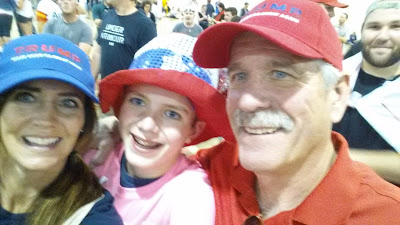 We noticed some mighty tall and big boys when we were in line, and I wish we had been closer behind them when we were going through the protesters at the gate - they would have made me feel a lot safer! We opted to stand near them inside and became friends. If you know Brady, then of course you know we became friends, right? They were football players, and super nice, respectful guys. They made Brady, who is not short, look like a shrimp! The one pictured below with Britt is also named Brady. They were so sweet to let us take a picture with them - we love our Ducks! 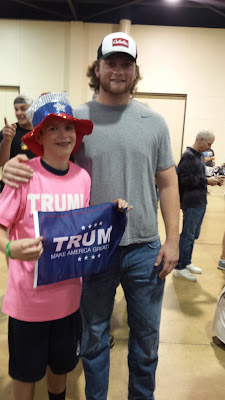 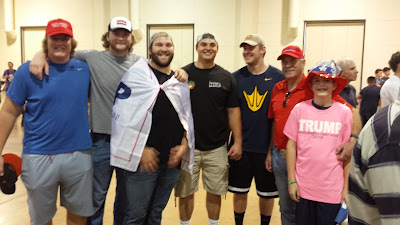 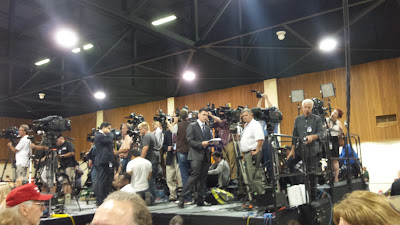 A few random shots of the media and people. Mr. Trump said it was a bigger media crowd than usual. 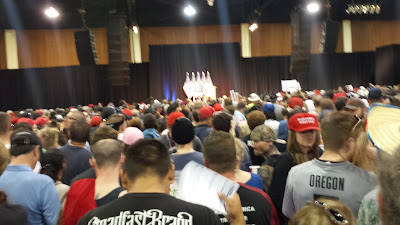 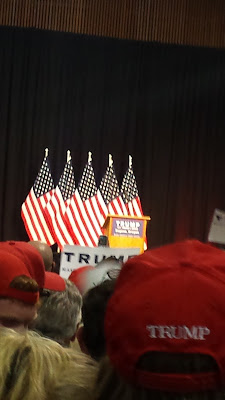 It was so amazing to hear him speak live! He is even more entertaining and engaging in person than he is on TV. I could listen to him for hours! Unfortunately, we had to leave before he was done, because we had to pick up Brailey from dance - there was no way we were going to leave her alone at night to wait for us. We are seriously grateful we were able to hear him and see him and to experience a real presidential race rally. And it all worked out, because on our way out, Brady was interviewed by the local news! 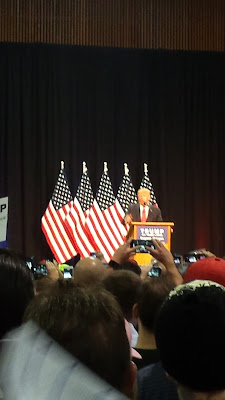 Although we are disappointed they made it sound like we left early for negative reasons, we are really happy Brady was featured. He was so amazing! You can see the interview by clicking the link below. There were still several protesters there, holding signs in our faces, heckling us and trying to get Brady's attention as he spoke, but he never missed a beat! He was fantastic, and we are super proud of him. He was, as usual, a rock star!
Brady's News Clip 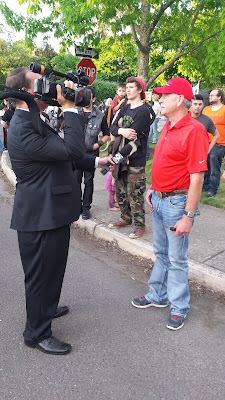 Once we arrived back at the school, we had to wait a few minutes for Brailey. We had our windows down, because it was such a nice evening. We were on a high from our experience, to say the least. All of sudden, a bunch of kids bunched up beside our car, noticing our Trump gear, and we heard them say, "They're Donald Trump people! They have Donald Trump hats on!" They spoke as if we were committing a crime. One of them said, "Pretend to take a picture of the sky and get their picture." I said, "Is there a problem?" And they all scrambled - I have no idea if they got their picture or not. One very polite boy stayed and said, "My dad told me everyone is entitled to their opinion. I like Bernie." Brady and I both said, "That's great! We like Bernie, too!" (And by the way, we do like Bernie, but we like Trump better.) He said, "But you like Trump, and that's like saying you don't want me here. I wasn't born here." And Brady asked him if he was a legal citizen, and he said yes, he was. Brady tried to explain that it is ILLEGAL immigration that is the problem, but the kid left before we could fully explain. We were shocked that he was so misinformed on Donald Trump's stance on immigration. People aren't even educating themselves on Mr. Trump's real policies and beliefs. Yet they judge him as if they know what he stands for. On that same note, Britt has been further bullied at school for his support of Mr. Trump. One of his classmates, a girl, said in front of several kids, "Britt! I heard your family posted a picture in support of Donald Trump!" Again, as if we had committed a crime. And as if Britt had anything to do with it! He said, "Yah, so? Do you have a problem with that?" And she said, "Yes, I do!" Britt told her she had her opinion and he had his. I am so proud of him for taking the high road! But I do feel it is truly shameful that parents don't teach their kids to respect other people's opinions and beliefs. And worse, it is a disgrace that those protesters would target a kid. Frankly, that is child abuse! It shows the kind of classless group of people they are, protesting in that fashion. So pathetic! And absolutely hateful. It was an incredible experience for us, though, and our only regret is that Brailey wasn't able to experience it, as well. If we had it to do again, we wouldn't change a thing, except our reaction to the protesters. Next time, we'll wear protective clothing and big headphones over our ears. In the meantime, I hope people will learn to respect others and to be kind. It is totally fine to support your candidate - we respect your opinion. We won't call you dumb or stupid for respectfully supporting another candidate, and we won't protest. But make no mistake, this family is Team Trump all the way, and we think he is already making America great again. We can't wait for him to make it even better!
at May 09, 2016