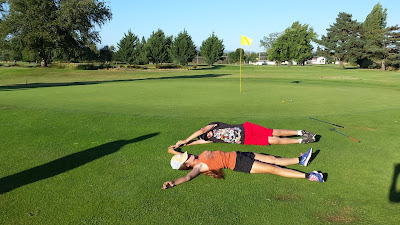 Here we are, at the end of another summer and the beginning of another school year. I've been putting it on hold in my mind, pretending that summer is still here. But the weather has already changed, the leaves are already turning and the kids have already started back to school. I can only live in denial for so long.

For me, it was a summer of healing for my body. My left leg was out of commission from June until the first part of August. It was super frustrating and very painful. It would be good for a few days, and then go bad for several days. Just when I was at my wits end, it finally healed. My fingers are crossed that it is good to go, and I am so grateful not to be in pain! Unfortunately, my plans for working out did not come to pass (and the scale shows this to my despair). I usually winter well, but I summered well, too. Not a good combo! (This is a ranching phrase, if you are unfamiliar - you want your stock to "winter well" and to come out nice and fat going into spring.) I am looking forward to being able to get back in shape. Thankfully, my hair finally stopped falling out about halfway through the summer. What a relief! I am praying it starts to grow back in. It feels better, and I am thrilled that it is no longer coming out by the handfuls like it was. Thank God for my beloved friend Melody telling me about the collagen, and I also started taking vitamins, which has helped me feel better overall. Even in the midst of all the chaos of our schedules, I was able to relax physically and emotionally more than I ever have before. I was able to let go of some personal issues, and that's always healing. Of course I am always a work in progress, but I am feeling a lot better, and it feels good to feel good, even if I am a little heavier than I would like to be.

We got a ton of projects on our place taken care of this summer, which is always a good feeling. We spent Memorial Day and Labor Day weekends the same way - getting stuff done. Our poo pile is already moved, the stalls are revamped, our shop is cleaned, our deck is resealed, and a myriad of other things are taken care of. It feels good. In between Memorial Day and Labor Day, we had a few unexpected projects come up. There were so many apples and pears this year, one of our trees had a huge branch break right off. Brady and I both heard it snap - it happened at about 10:30 one night. We had just settled down to watch Fox News, and "CRACK!" We didn't know what had happened. Unbelievably, our horses had just been eating their hay under this exact spot. Their guardian angels guided them away, thankfully. So we had to cut that up and get rid of all the apples. We spent two different days cutting down limbs in Mater's pasture from apple trees, as well, and after continually worrying about him eating apples, we finally just cut the entire trees down. It was a lot of work, but an even bigger relief not to worry about him getting colicky from eating too many apples. They weren't the healthiest of trees, anyway. There are still millions of apples and pears on other trees, and we are keeping our eye on them, praying they stay on the vine until we put our boys in their winter stalls and paddocks. Our fingers are crossed! 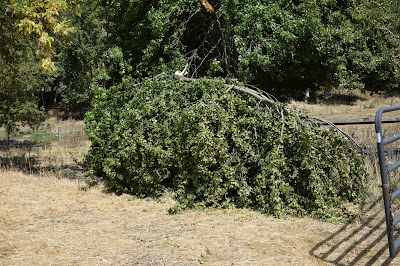 This happened on the hottest day of the summer. A lot of folks in the area lost branches and trees, due to the weight of the fruit and the heat. It fell right on our fence, but didn't do too much damage. 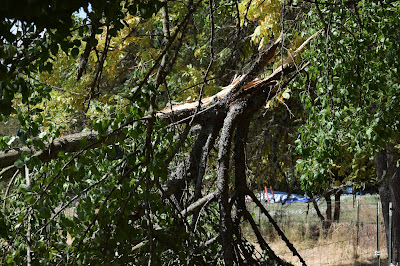 One of the biggest and best parts of our summer was golfing. This made Brady so happy! He has taken to golfing on his travels during the week, after his appointments. He gets so homesick, it has been a Godsend for him to have something he enjoys to do on the road. And now our entire family golfs. It is a subject that deserves it's own blog post. Suffice to say we all love golf and we spent a good deal of our summer golfing. The picture at the start of this post is of the kids rolling around on the putting green one evening. It was our first time playing 18 holes, and they were getting tired. I admit they learned this from me. I rolled on the green first, and it felt so good, they tried it. We just can't keep up with Brady the Golfer!

And now summer is gone, and life is changing for us. And changing fast! After all, we have a high schooler in our midst. She's been attending practices for her high school dance team since May, before she even officially became a high schooler. It wasn't a summer of sleeping in for her, which meant it wasn't a summer of sleeping in for me, her official chauffeur, either. Twice a week, she had to be at practice at 7:AM sharp. It was fine, and we managed, even though it seemed awfully early for summer mornings. When you live out of town, it puts an earlier start on your day. The one practice she had in the evenings was on Mondays, which is when Monday Night RAW is on. Brailey hates to miss Monday Night RAW. Missing Monday Night RAW was way worse than getting up so early. On the days she didn't have dance, she rode with Patsy. I think the number of days Brailey got to sleep in this summer could be counted on one hand. Two hands, at the most. Not very many.

The last two weeks nearly did us in as we experienced her first high school daily doubles. For the dance team, daily doubles consisted of two workouts, three hours each, twice a day. The first round started at 7 in the morning, and the second round started at 6 in the evening. Six hours of dancing a day. The Colleens were the first ones there and the last to leave. It nearly did me in! Brailey was such a trooper, and fully participated with a strained ligament in her leg. The very first night of daily doubles, they did an hour of turns, which is what injured her leg. Dancing may not be recognized as an official sport by the OSAA, but don't let that fool you. These girls put in countless hours and work really, really hard.

One of the perks of our summer schedule was a lack of swim practice for Britt. He had so many basketball camps, we couldn't logically fit swim in. If we had, I may have truly lost my mind. It was nice not to have to worry about getting to swim practice every single night of the week. Swimming is another sport that takes a lot of commitment and a lot of time. I miss the wonderful friends we met through the swim team, but I have to admit I didn't miss the daily trips to Amazon Pool every evening over the summer. It felt like heaven to stay home for most of our evenings.

And so the dog days of summer flew by, and here we are, on the brink of a new year, each kid at their own school and on their own schedule. Back to reality. Back to change. Back to fall, the time of year that makes me blue. But if there is one thing I know, it is that time goes by fast, and in the blink of an eye, another school year will be done. So what can I do but hang on and enjoy the ride?
at September 09, 2016