Where Did October Go? 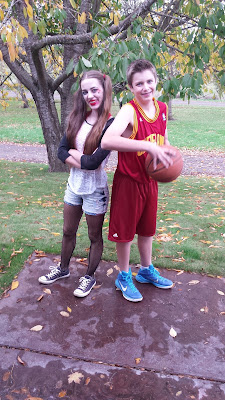 Who could know where October went? It was here yesterday and gone today! "Today" as I write this is Halloween, and although I didn't think I would get my traditional picture of the kiddos together in their Sort Of Costumes this year, after we got home from school, they said, "So are you going to take a picture of us together this year?" It melted my heart... And so here they are, my Puddins, the totally rotten Harley Quinn and the NBA super star Kevin Love. Now let's go back to the beginning of October... 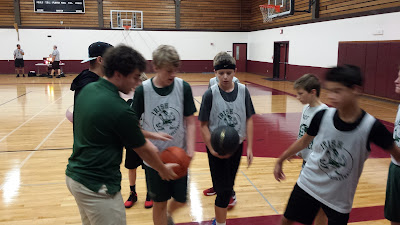 Britt is still loving basketball and is on a fun team for Fall Ball coached by two boys from the University of Oregon. He is catching on and learning more every single day. 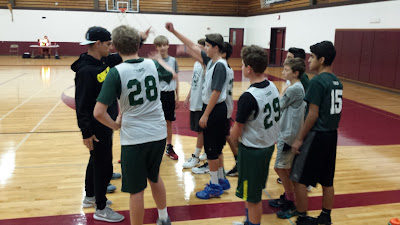 Below, a picture of Britt and his teammate Hayden. They both serve as altar boys at St. Paul. They don't go to the same school, so it has been fun for them to connect in this new way. 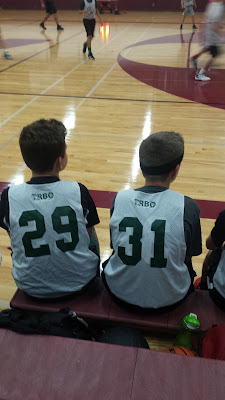 One of his tournaments was at the Catholic high school, Marist, so of course I had to take pictures with the statues. Why not? 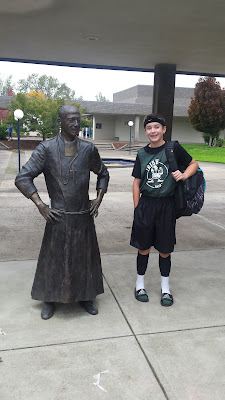 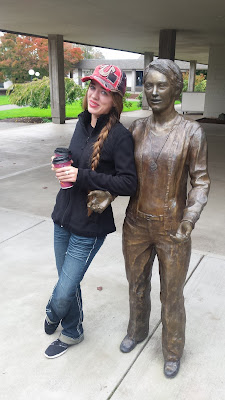 Last Monday was the last home game for the volleyball team, and it was a fund raiser for cancer with pink jerseys. I got some fun pictures of Brailey with her old teammates. We have had the best time watching these girls play! Sometimes there is a tiny piece of me that wishes Brailey still played, but then I see her dance, and I know we made the right choice. We had an extra fun time at this game, because there was a silent auction. We ended up winning a basket of Irish goodies, which was really fun! Britt was bummed, because he bid on a really cool tower of candy, but he didn't win it. Dang... (I was so relieved!) 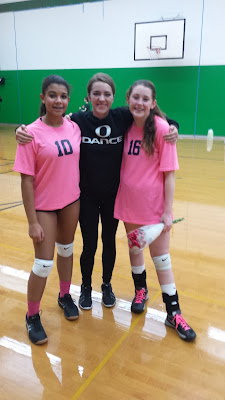 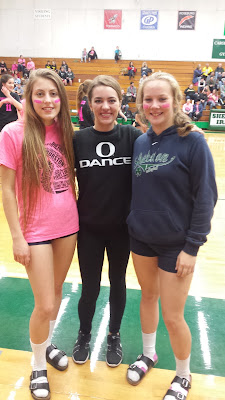 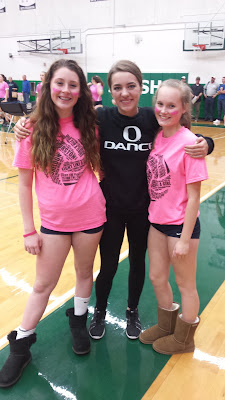 Britt and I were waiting on Brailey to get out of dance practice one evening in car, so we took some cool pictures of his groovy new headband. To say he loves his headbands is an understatement. They keep the sweat out of his contacts, sure, but I suspect he likes the added bonus of a little "cool" factor, as well. This headband is reversible, which is even more stellar, right? Or as the kids today say, "lit!" 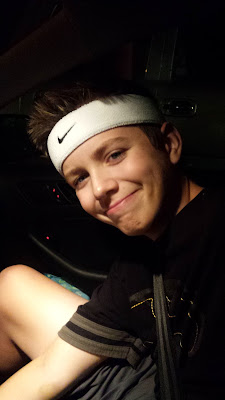 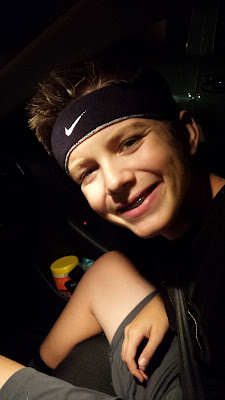 This past Saturday was Brailey's Fall Dance Showcase. She danced in four routines, and she was amazing in every single one of them. I didn't get any pictures of her dancing, because I was filming. We can't share the videos until competition season is over. So stay tuned for some really cool dance videos to come. She will blow you away! 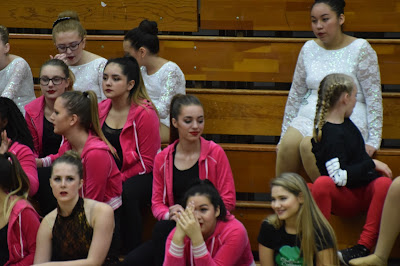 Brady's favorite part of dance is when they do the Drill Down, or as he calls it, the Thrill Down. Brailey did so well! She took herself out when she didn't need to - doubted herself. Or she would have still been in it at the end! But she is getting so good at it, and the more experience she has the more confident she will be. Just like anything, right? She takes it very seriously, as you can see from her face. 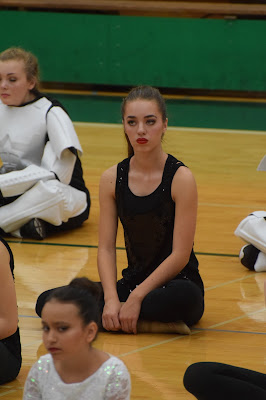 Our Best Trainer in the World, Patsy, came to watch her dance! It was so sweet of her, and really fun to have her there in the stands with us. Brailey was so touched that she came and I think Patsy was impressed with her dancing skills. 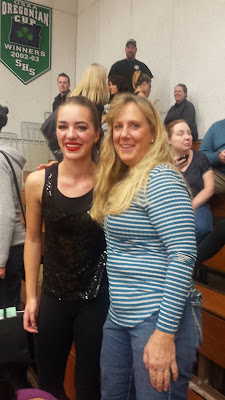 We were really excited to see Roshny, the Best Dance Instructor in the World, who was there with her dance company, The Dance Factory. Her kids looked so good in their routines! She ordered this darling trash can from Brailey, and we were able to deliver it. It turned out really, really good, don't you think? 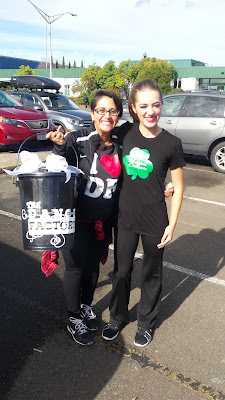 After the showcase, Britt and Daniel went to the Duck game, where they once again had the BEST DAY EVER! They decided Daniel is a lucky charm for the Ducks, because both times he has been to their games this year, they have WON! 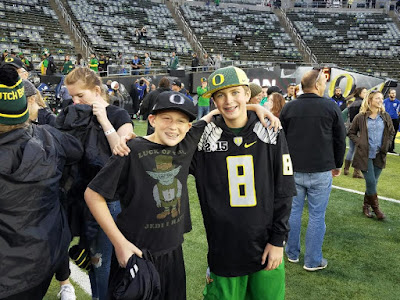 My brother brought his girl Rici to the game, as well - her first Duck game! They had a big time, too, and she was super impressed with all the fun Autzen Stadium shares with fans. Aren't they so cute?! 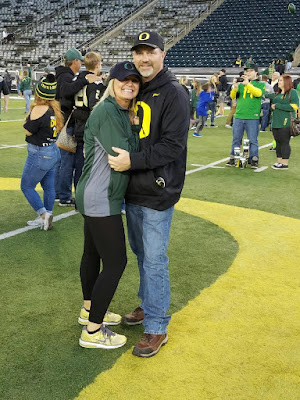 And then a fun family Sunday breakfast before they had to head home. Below, Brailey and her Godfather. 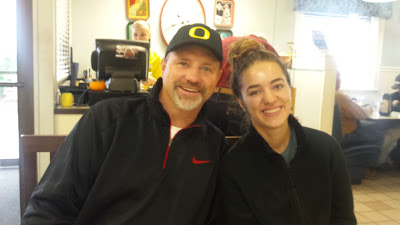 Uncle Shawn with his only niece and only nephew. They love their uncle! 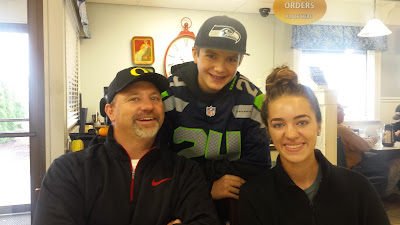 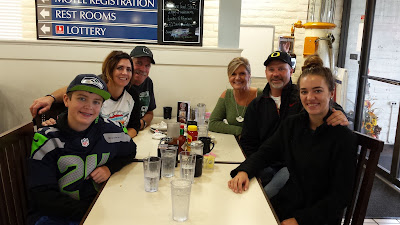 As you can see, we were all quite happy and we had a seriously good time. Words cannot express how good it is to see Shawn so peaceful, content and, frankly, on cloud nine! There is a lot to be said for the comfort of good company. After all he has been through the past few years, he deserves a wealth of happiness. We couldn't be more thrilled he and Rici met! She is a LOVE! 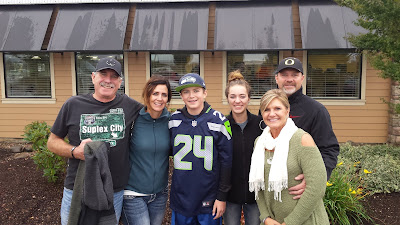 And to wrap things up, a little Halloween fun. My B's are the best posers ever. I don't even have to ask them. Little do they know what a treat it was for me that they wanted that traditional Halloween photo session from years past. Goodbye October - you were fun! 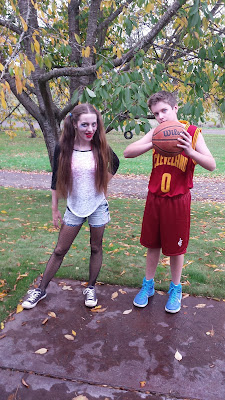 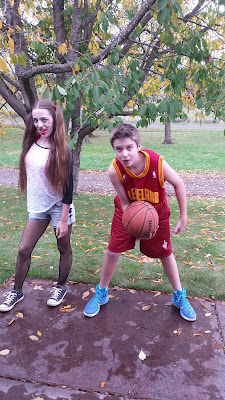 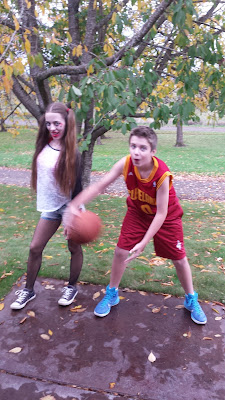