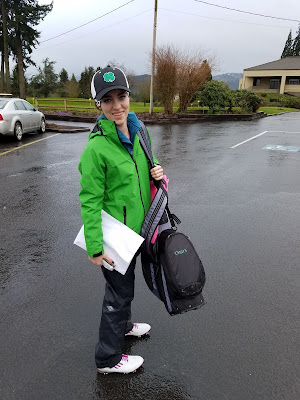 Wooooooo-wee! March in like a lion to say the least, and a busy lion at that! Brady and I are so proud of Brailey for persevering and making it through two practices a day for two weeks, both golf and dance. Last week was the last of this hectic schedule, at least for a little while. It wasn't easy, that's for sure! But she has decided to stick with golf and seems to be enjoying herself. The girls on the golf team are super nice. She was even invited to a birthday party (sadly, she was unable to go because she was under the weather after pushing though all week - by the time the party came, she was down for the day, exhausted and bad sore throat.) In any case, golf has been a nice change of atmosphere for her. And even though it has been raining every practice, she has enjoyed being outside and getting some fresh air (in more ways than one!). 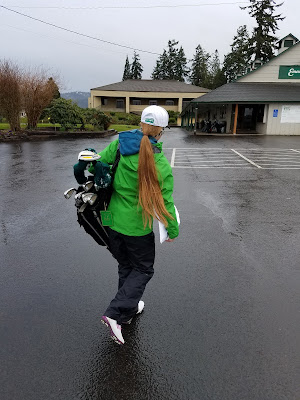 I was so, so happy Brady was home on Thursday morning last week. He usually isn't, but thank goodness he was, because THIS was in our barn! I went to feed the horses, was just reaching in to get the grain, and I happened to glace up and saw this body laying a few feet in front of me. I choked my scream down, in case it was sleeping, and ran out the barn and into the house. Brady was on his way back from taking his boss to the airport, thankfully. I called him and told him I had "an emergency." It was so creepy! It actually didn't look like a raccoon from the back, which is what was facing me. I know how mean these creatures are, so I am happy to report this one was dead. Brady scoped the situation out and hauled him off. He had a bloody hind foot, so maybe he was hit by a car and died in our barn from internal injury. We have no idea, but I am relieved Brady was home to save the day. It took me all day long to shake off the creepy feeling this dead raccoon gave me. 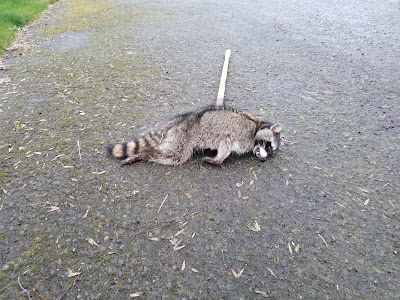 Britt was sick all week long and didn't make it back to school until Friday. He actually still has the sore throat, as do we all. Not fun! As soon as he got home on Friday, he painted his castle from art class. He is so proud of his work and I am proud of him for caring about it. He told me many times about making this castle out of clay. It had a few pieces fall off during the cooking process, I guess, but he was still thrilled to paint it. He did a great job! 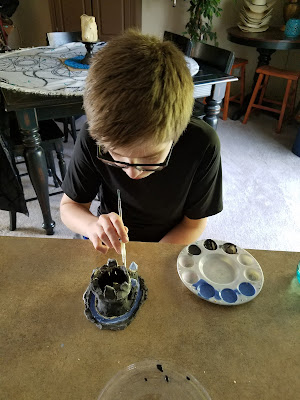 We let Britt stay home Friday evening since he had been sick all week. He took this picture of Brady and I before we left for Brailey's Dance Sendoff performance. It was such a wonderful show! 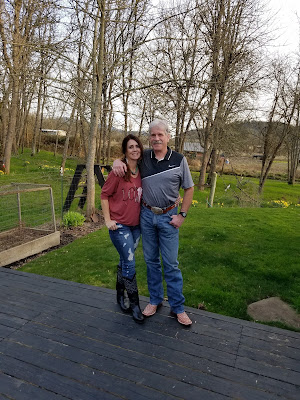 Brailey and her friend from the middle school dance team, Kaelyn, both made the Top Ten in the Novice Drill Down! Brady was so, so happy and proud of his girl. He boasted to her, "You made the Top Ten TWICE in less than a week!" It is an amazing accomplishment, and we are incredibly proud of her. Drill Down is not easy, period. These two sweet girls have a lot in common and I was thrilled to sit by her mother during the show. It was actually her birthday, and I am glad I was able to give her a birthday hug. Even better, our dear friend Denise and Brailey's best friend Nikki came to watch the show, and it was fun to see them! I miss Denise - I don't get to see her often enough. We love The Reeves! 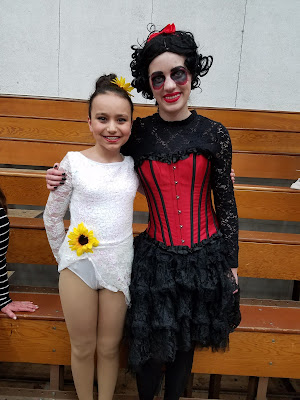 Nikki brought Brailey the most beautiful flowers, and Brailey was so touched. Nikki was looking everywhere for Brailey, who came up to the bleachers, and then I stole her for the picture with Kaelyn, and Nikki didn't know where she was. When Brailey ran back down the bleachers and found her, it was so cute! I love these happy pictures! 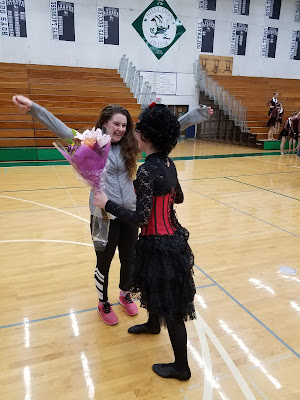 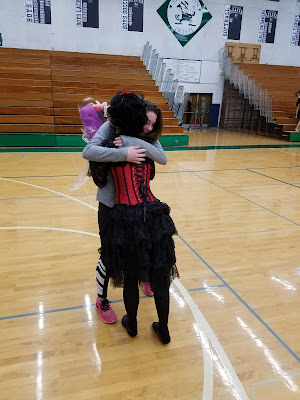 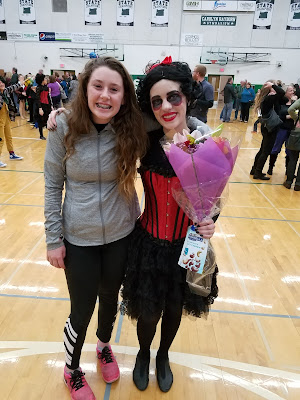 Below is a hodge podge picture of most of the Colleens - a few of them had already gone out into the hallway for ice cream. The seniors are in the front, and I just can't believe how fast the year went by. Just last year, I watched them as juniors. I have met some of their sweet mothers, and my heart hurt for them as they watched their daughters in their last Sendoff Showcase. I admit I saw a few tears. It is a bittersweet experience. It is hard to think in only three more years I will be in their shoes. 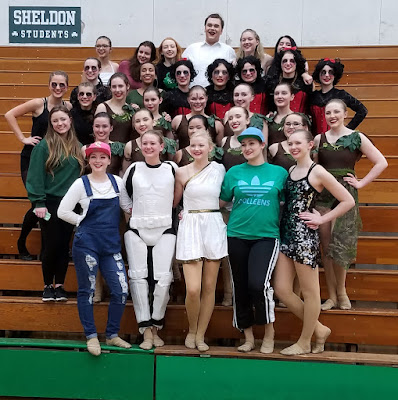 This is Brailey with one of the seniors, Brandon. He was a cheerleader in years past, and this was his first season of dance. He has been very nice to Brailey and all the girls. I give him a lot of credit for trying something new as a senior. Not many kids would do that. 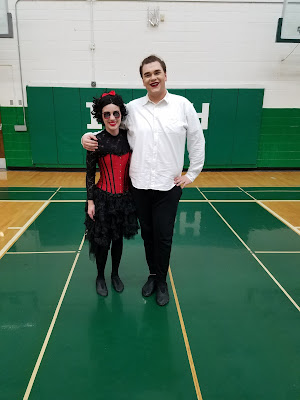 After a restful Saturday (at least for the younger B's), on Sunday we met our neighbor, who used to be on the PGA Golf Tour, for a golf lesson at Fiddlers. It was a great session, and he helped Brailey immensely! He said she has a great swing and is a good student. He also figured out some things about her clubs, and we had to get her a new driver. We are so grateful he is our neighbor! 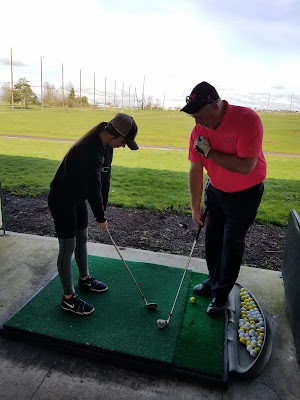 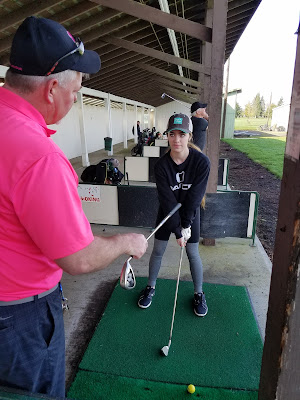 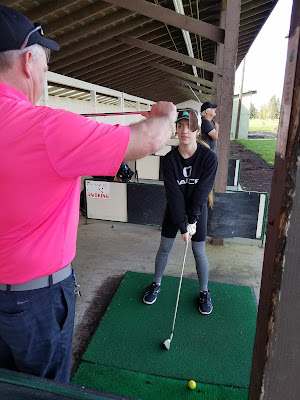 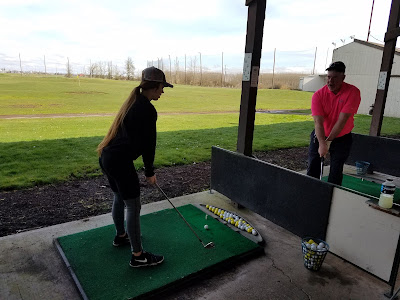 Britt, Brady and I hit a few balls, too. At least I could hit, this year! But I still have a lot to learn. Britt is doing great! Brady has his hands full with me. What can we say? I'm not exactly a natural, but I still love the game. 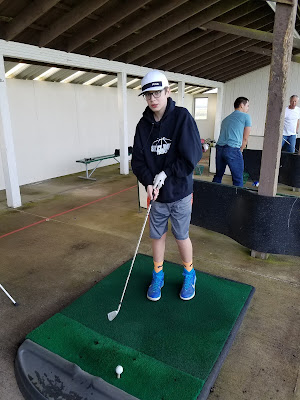 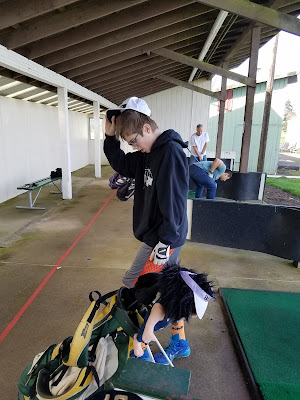 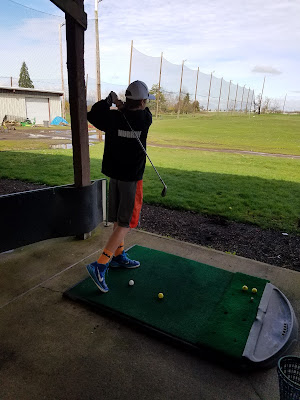 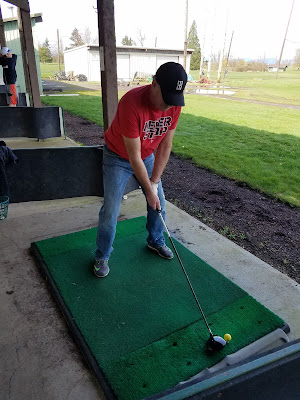 Brady knows one of the owners at Fiddlers, and he helped pick out the most perfect driver and woods for Brailey. And he gave us the deal of the century on them! We also got her a ball marker that is magnetic and goes on her hat. There is the nicest senior girl on her team, Kelsey, who told her she highly recommended Brailey get one. Kelsey has been so welcoming and sweet to Brailey and gives her a ride back to Eugene from Creswell on Tuesdays and Thursdays. On their last ride, they discovered they both played Webfoot volleyball under the same coach. And they both quit after that season for the same reasons, as well. So they have a lot in common! We are bummed that Kelsey is a senior, but Brailey is enjoying her time with her while she can. Nice girls - they do exist! In any case, Brailey is ready to hit the golf course this week and hopefully everything she learned from our neighbor will stick with her. Only two weeks until Spring Break - bring on the sunshine! The 4 B's are ready for summer! But we're going to enjoy every second of spring on our way to the end of this school year. We are two thirds done, but who's counting? One thing is for sure - it will be here and gone in the blink of an eye. 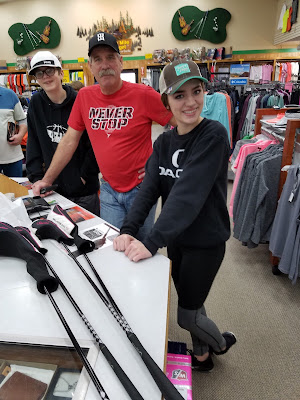