Last of the Spring Basketball Games 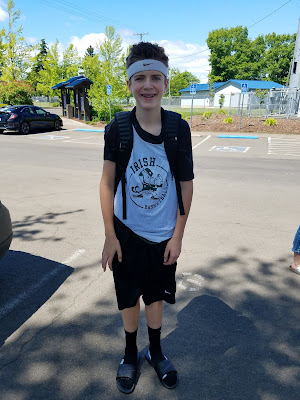 We didn't know if it would work out, but we should have known it would - life has a way of doing that, afterall. Britt was on two different basketball teams this spring. We signed up with one (TRBO) before we knew he was going to be invited on another one (Irish Select). There are no refunds when you sign up with TRBO, and so we just thought, "Well, let's see how it works out." If it worked out that practices and games were different, great! If it didn't, then it wasn't meant to be. Lucky for Britt, it turned out that his practice times were different. We were thrilled! However, the practices were back-to-back every Monday and Friday. This was not easy, but it was completely doable, thanks in great part to the TRBO coach being so understanding. We explained our situation to Coach Jaylen and shared with him that we would be at every practice and game we could be at, but the other team was our "priority." He was more than understanding, and it all worked out perfectly. Britt only missed three TRBO games due to his other team having games at the same time. And he only missed one TRBO practice, which was the very first one, because both teams were practicing at the same time. And that brings us to the end of an amazing and fun journey for Britt. This past weekend was his last with the TRBO team. Spring basketball is a wrap! 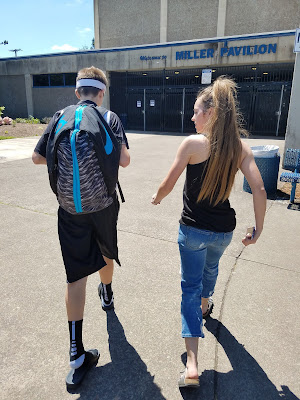 Britt was one of two seventh graders on an eighth grade team. We were a little apprehensive about this, but every kid turned out to be super sweet! They were all from Cal Young, except for Britt and the other seventh grader, who was from Triangle Lake. This team was a hodge podge of sizes, as you will see in the pictures below. Britt, for his part, was middle of the road. He wasn't the shortest nor was he the tallest. We are so happy he made some new friends! 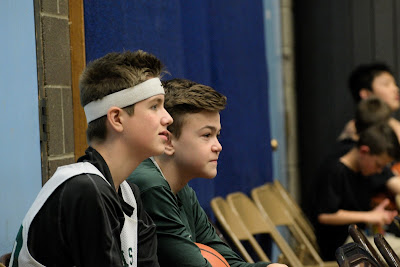 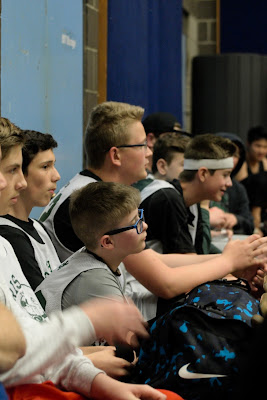 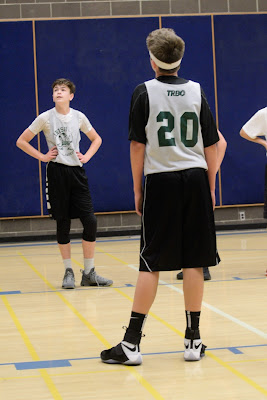 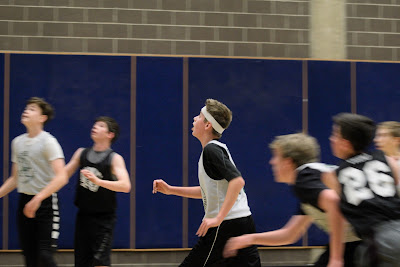 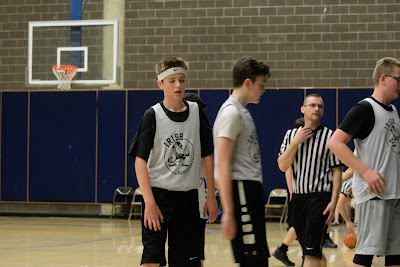 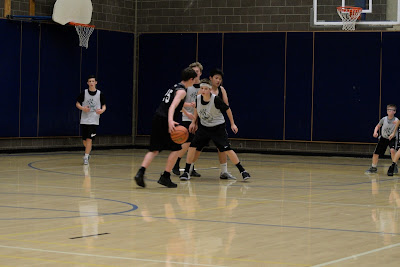 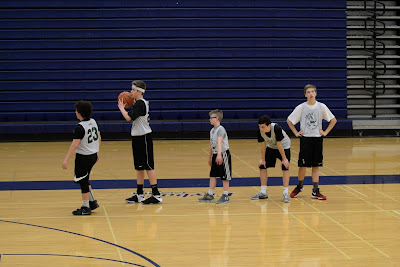 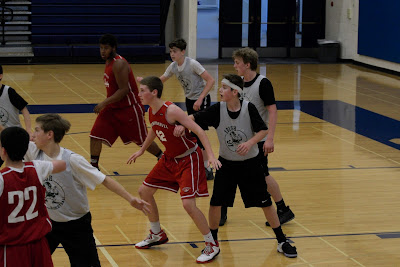 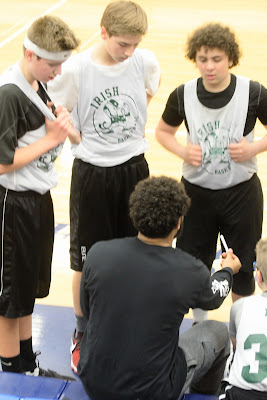 Below are the two seventh graders, Britt and Dillon. Dillon was born prematurely, and he is about a year and half behind in his growth. I found him inspiring in his courage! He was eager to get out on the court to play with those big eighth graders and not one bit scared! 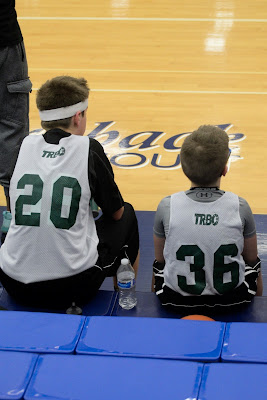 Britt is setting a screen below. He got to play a lot in these games and he also got to play a new position, which was fun for him and more excellent experience. These games allowed him to develop some confidence to try new things and not worry so much about messing up. Although a short season, the experience is bound to serve him well in future play. 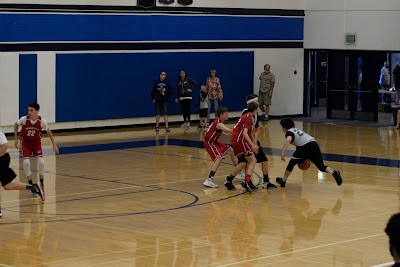 Check out this kid next to Britt in the red. He is an eighth grader from McMinnville. Seriously! And he looks like a man, complete with lamb chops. He was humongous. I mean HUMONGOUS! 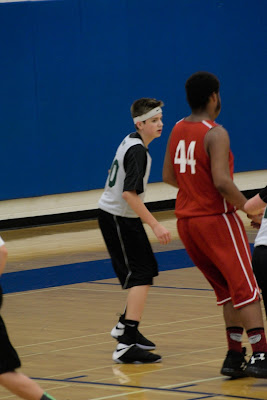 I thought this was a great picture to show the variety in their sizing on this team. They had tall, medium and short. 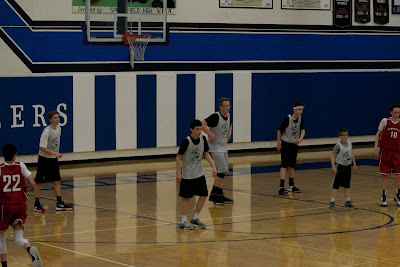 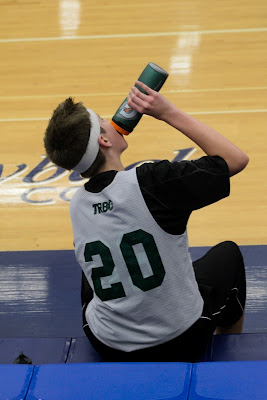 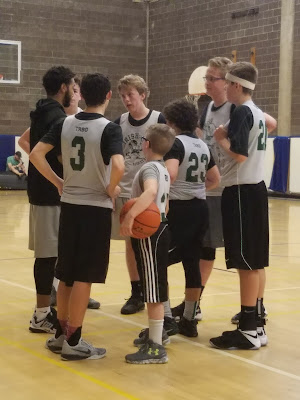 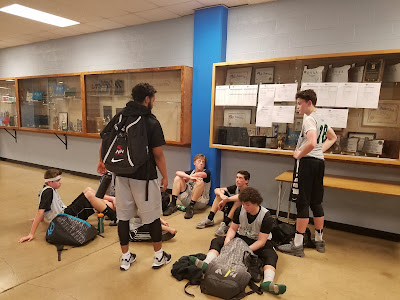 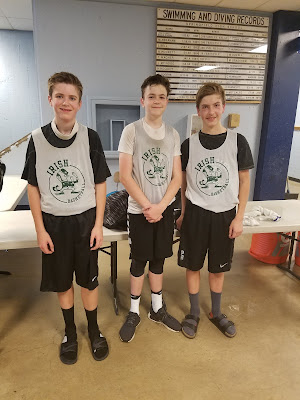 Whenever a season like this ends, it is bittersweet. It wasn't easy for Britt to go from one practice to the next and to give his all at both of them, but he did it. He wasn't sure he could do it and was fearful it would be too hard, especially after the first week. His feet hurt terribly (we soon discovered he had grown out of his shoes!), his legs hurt and he was tired. But we encouraged him to stick it out for a couple of weeks, and before we knew it, he was hooked on both teams. He loved (and loves!) both teams for different reasons. For our part, Brady and I are grateful to our toes that Britt had good coaches this year. What a blessing! I mean, truly a blessing. Good coaches are key to success. After last spring's season, which was a total fiasco and nothing more than glorified rat ball, Brady and I made a decision that we would never let Britt be on a team like that again. Britt absolutely could not have been more lucky in his coaches this year. And thanks to their stellar help, he has improved greatly and has grown as a player in so many ways. He still has a lot to learn, but it's coming. And he is continuing to put in the work. Thankfully, his Irish Select team is still carrying on, and we are super excited about the future. A little hard work and a tiny bit of luck, and Britt's dream of making the high school basketball team just might come true. Thankfully, he has one more year to get there. In any case, seventh grade basketball was a year we will always be grateful for. Go Irish! 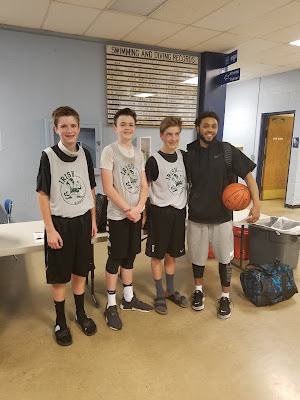