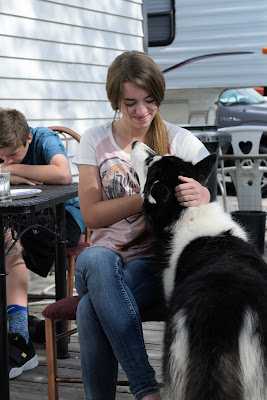 After such an amazing celebration and party, it is hard to come down off that high and  to say good bye. We met for breakfast at the party hub, my parents' place. We had the most delicious homemade cinnamon rolls (made by Grandma) ever! They were so good. I also had one of Rici's cookies she baked for the party. She is a professional cookie maker, but the altitude changed the way they normally turn out, so she was not happy with them. Trust me, they were TO-DIE-FOR delicious, even if they didn't measure up to her standards! I regret not thinking to take them with us for the trip home. What was I thinking?! Anyway, in the picture above, Brailey is petting Jazz, one of Lanie and Nate's dogs. She is super sweet! And below, Hemi is on Lexi's lap. Our pug, Rosin, was fascinated with her! She's never been so interested in another dog before this. Hemi was not impressed with Rosin, but Rosin couldn't take her (blind) eyes off Hemi. It was super cute to watch! 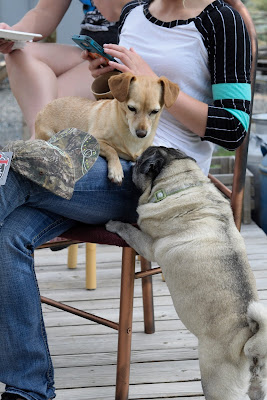 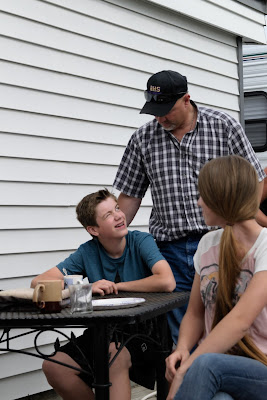 I love these pictures of my brother with his niece and nephew. They've only gotten to know him in the past couple of years, and it has been so nice for them. He's a really fun uncle, and it breaks my heart to think about all the good times we missed, but it makes the times we have now even more special. We all appreciate the time we have together far more than we may have. We certainly don't take it for granted. 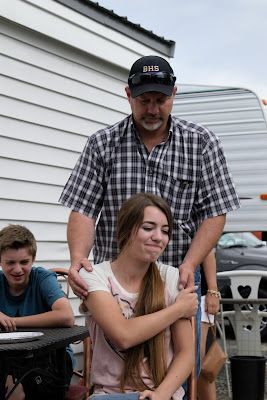 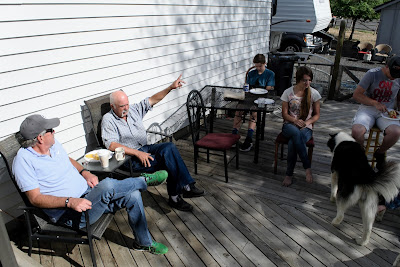 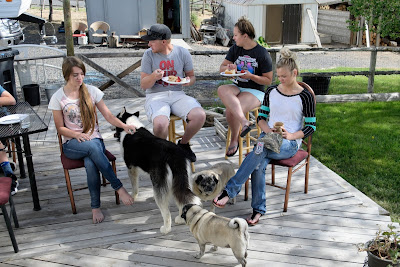 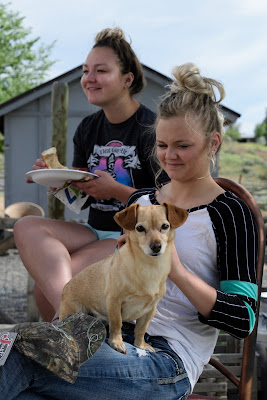 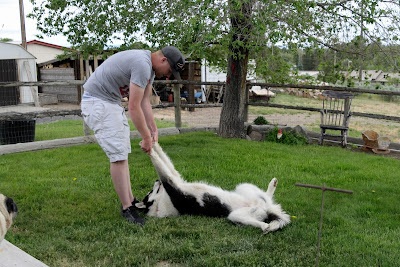 Because it was so close to Brailey's birthday, we had a mini birthday celebration. She held a candle while we sang to her, and then she opened some gifts. 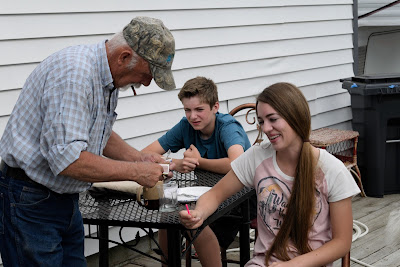 She was thrilled to get a new rope, and especially thrilled it was purple! This color is very symbolic for her - more on that to come. 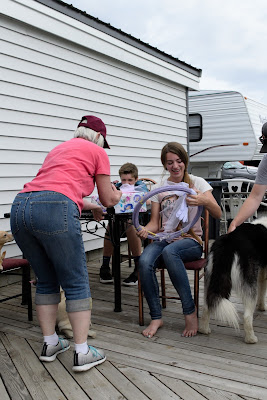 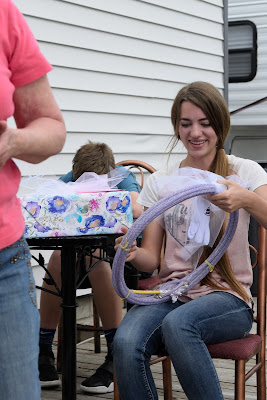 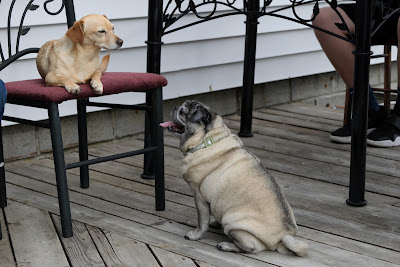 Above, more of Rosin's fascination with Hemi. And the card from Uncle Shawn is actually writing on the outside of the gift box. So sweet! He was always a great gift giver. It is nice that he can get back to that natural side of himself. In years past, it was taken away. He was told it was taken care of, and it never was. He's much better at doing it himself. And he knows kids! Who doesn't need WiFi these days, right? So fun! 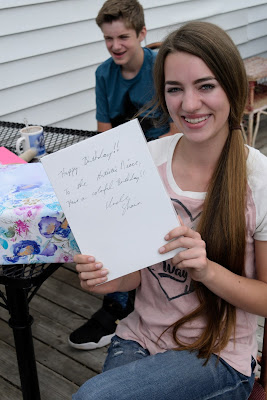 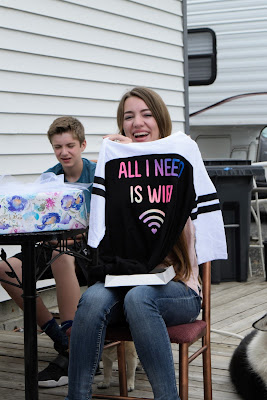 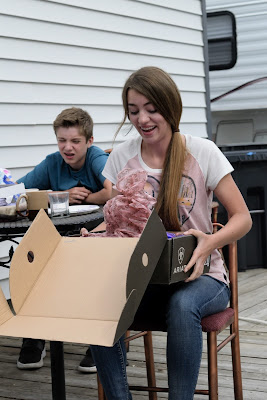 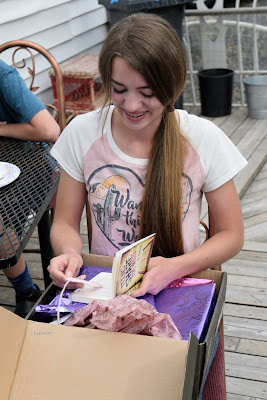 This book held a cross that belonged to my dad's mother, Grandma Bert. Great Grandma Bert to my kids. Brailey was incredibly touched that Grandma gave it to her. I know she will always treasure it. It is shaped like a cross and pink. So precious! 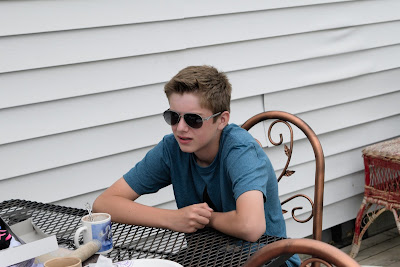 Before we left, Uncle Shawn gave Britt some "tips" on playing the game of basketball. It was great advice. And also funny! He said Britt is finally tall enough to play basketball against him. But he also doesn't play with anyone who is taller than he is, so Britt has a small window of opportunity to play with his uncle. My brother is quite the comedian. Note his Scandinavian Red Hound is in the background. Face is a sweetheart of a dog. 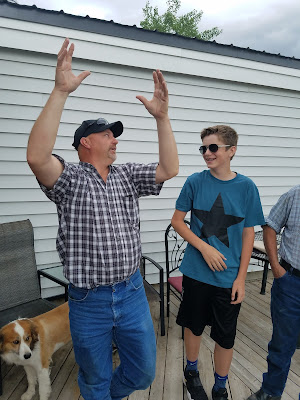 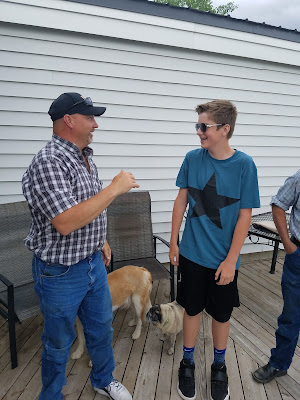 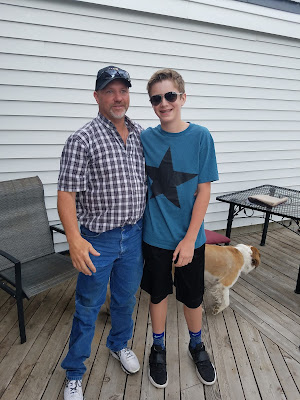 And that's a wrap on our Harney County fun. As I said in previous posts, it was the best of times, it was a dream come true and it was an answer to many prayers. Here's hoping we will have many more of those times in the days to come.
at June 09, 2017