The Bittersweet End of an Era 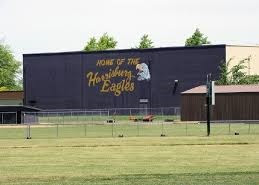 The end of this school year has been bittersweet. We are so happy to be done, after such a long year! The extra week to make up for the snow days has been brutal. But there has also been a bit of sadness, as there is every year. It is always a painful reminder to me that my kids are one step closer to being on their own. The melancholy was deepened this year by the fact that we are ending a chapter on a significant part of our lives. I have been alluding to a big announcement for a few weeks. Here it is... After being part of Spanish Immersion since they were in first grade, we are changing schools. Next year, they will be attending school in the Harrisburg School District. Hooray!

Trust me when I say it was not a decision we made lightly. But once we started the ball rolling in that direction, everything seemed to fall into place. The hardest part of the decision was letting go of the Spanish piece of their education. And then the next hardest part for Brailey was letting go of being on the high school dance team. But once we got past those two factors, there just weren't any reasons not to change schools.

Once we made up our minds, I called Harrisburg High School to see how to start the transfer, and I was stunned to learn it is such a popular school. In fact, they limit their enrollment. My heart was panicked! We had went through a gut wrenching decision process only to find out it wasn't possible!? But as fate would have it, there was one spot available in Brailey's class. One. It was the final confirmation that this was the right decision. It was truly meant to be!

To backtrack a little, this has been a very difficult year for Brailey. Being a freshman was nothing like she thought it would be. She loved middle school so much and had anticipated high school being a similar kind of fun. At first, we chalked it up to it just being a rough year. Then I started to notice that every morning on the way to school, she would become absolutely silent and stoic. Not only could I see the sadness, I could feel it. In retrospect, I know she used the time in the car to mentally prepare herself to deal with the day, donning her armor. As a mother, I cannot tell you how hard this was to see. Yes, I know there are far worse things in the world, but seeing your child in a state of mental distress is difficult, to say the least. After school, by the time we got home, she would magically turn back into the happy girl we know. By the weekend, she was her wonderful and happy self. And then, like clockwork, as soon as the school day appeared on Monday, she was sad beyond belief for the next five days. She started developing migraines. We discovered her hair system had gone into shock from the stress (same thing that happened to me), and she lost a severe amount of hair. She was in emotional turmoil, and it killed Brady and I to see her this way.

There were several reasons for her stress and sadness. Of course I'm not going to go into details. Someday, I may write a post about it. But for now, we will save that story for another time.

It is amazing how once we were able to think outside our comfort zone, all of a sudden, our eyes were opened to the real possibility of making a change. One by one, the positives began to add up for Harrisburg. We would say, "We're 70% sure we're going to move." The next day it was 75%. Then it went up to 82%. Next thing you know, we were at 98%. And then that fateful phone call to look in to transferring her, and we were 110% sure!

For Britt, it was a tougher decision. In fact, we are still waiting on final confirmation that he will be able to transfer. We'll know by the middle of July. The odds are high that he will. After Brailey was accepted, we considered letting Britt finish his middle school years at Monroe. But that would mean Brailey would have to take a bus, and having two kids going in two different directions on two different school schedules doesn't seem smart - it certainly wouldn't make life easier. Also, Britt doesn't enjoy Spanish like Brailey does. Then, we thought about high school for him. Wouldn't it be better if he knew the kids he would be going to high school with? Yes. And surprisingly, Britt didn't freak out or panic. He calmly accepted our decision they both transfer to Harrisburg. Brady and I think he knows it will be good for him.

We have driven by the schools several times since making our decision, and they are both excited and fearful at the same time. Change is hard, of course. But there is so much to look forward to! It is a smaller school, closer to home, with not a single stop light to drive through. In one year, Brailey will be driving - this will be a much safer route for her to travel. The colors are the same as Burns High School's colors, where both of my nieces graduated from - purple and gold. They have a closed campus. The best part? They have a four day school week! Brailey will have more time with her horses, and she will also be able to have lunch with her friends from Sheldon on Fridays. She is really looking forward to that!

Still, in these last few weeks, as she has shared the news, it has been hard for Brailey. She had to tell her best friend, which was very sad. They have lunch together almost every day, and Brailey is going to miss her time with Nikki. She told two of her closest friends in her Spanish Immersion program, and they were so sad, and that made Brailey sad. She took cookies to her last dance class and said her good byes and then promptly burst into tears as soon as she got in the car. Letting go of being a Colleen was really, really hard. She has asked everyone who mattered to her to sign her yearbook. People wrote the sweetest things to her! She asked for pictures in one of her Spanish Immersion classes, and the teacher took some great ones. She realized she was more loved and liked than she thought. She has made some wonderful friends! Thankfully, they will all be able to keep in touch. But at the end of the day, she is ready for a new adventure in a new school.

Britt is only telling his friends the news this week. We wanted to talk to his basketball coach before he heard it through the grapevine. We are praying he can still play with his same team. If he can have just one more year with them, he will be able to maintain his friendships with those very special kids and learn even more from the amazing coaches. Our fingers are crossed. Britt would rather stay at Monroe, of course, but he knows Harrisburg will be good for him. He is worried about whether or not he will fit in. I am sure he will - the country boy in him will find his way back to the surface, perhaps. And who doesn't love a four day school week?

As a mother, my heart hurts for both my B's in different ways as we end this era. I know for a fact we made the right decision, but saying good bye to all the wonderful friends we've made and to the comfort of familiarity is not easy. If you feel so inclined, please say a prayer for my kiddos as they embark on their new journeys - we are always grateful for prayers. And we are also looking forward to keeping in touch with everyone and to coming to all the games and events we possibly can to see our beloved people. Thankfully, we aren't moving, just changing schools. A new adventure awaits us, and as always, I will share it with you every step of the way.
at June 21, 2017