The Summer of Horses 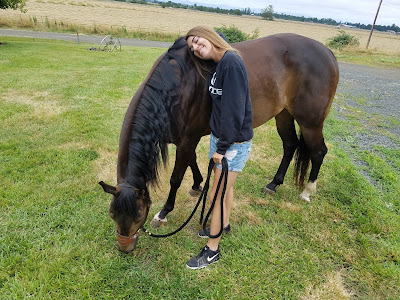 This summer, we haven't been doing too much golfing. We definitely play a few rounds every now and then, and we still hit balls at home on our own personal golf pad Brady made for us. But most of our free time has been taken up with horses. Brailey came home from her Rodeo Bible Camp in Pendleton more inspired than ever to be a cowgirl. Alvin taught her so much about riding, and the roping instructor told Brady, "If she can ride Alvin, she can ride anything!" We are super proud of her and so happy to see her enjoying her summer and doing what she wants to do with it. On that note, in order to be supportive to Brailey and because he has told her for three years now he was going to do it, Brady entered his first gaming show last weekend. He was amazing! Keep scrolling for more about that... In the meantime, here are just a few of the many moments we've had so far with our precious horses this summer. 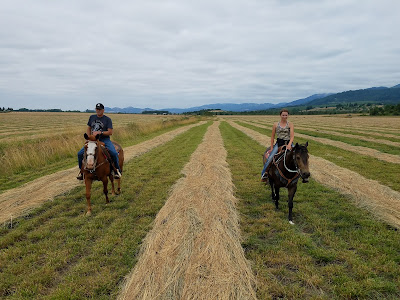 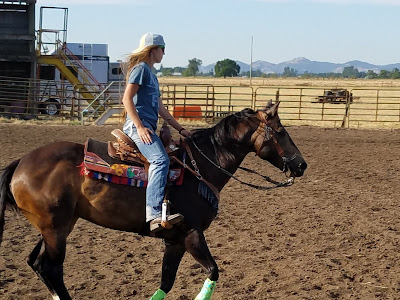 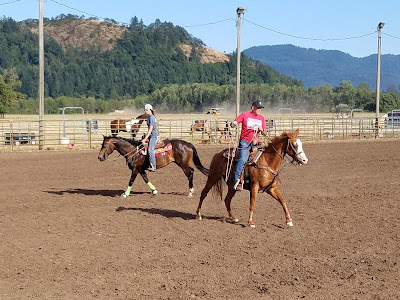 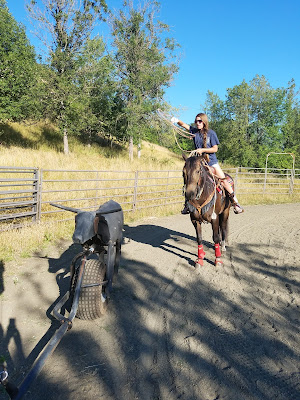 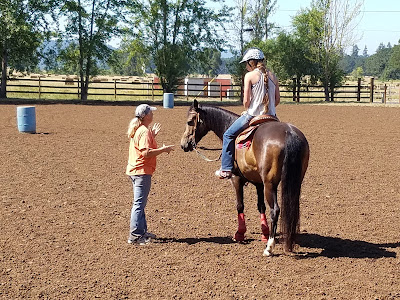 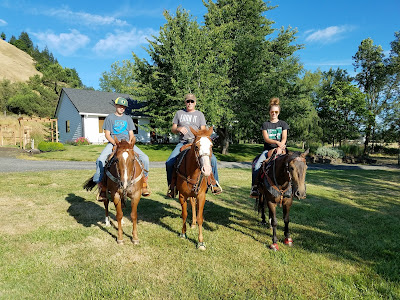 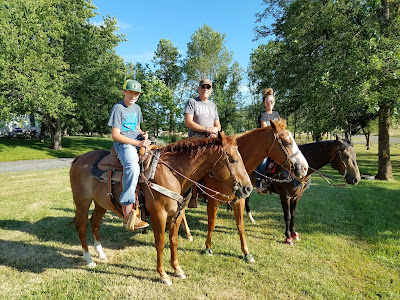 Britt is so funny. He tells himself (and us!) he doesn't like to ride. But he actually does like to ride. I "made" him go on a trail ride one evening, and as usual, nobody had more fun than he did. He was very upset to have to wear jeans - that was the worst part, for him. Once they got back to the house, he zipped back into his shorts. Brady, Brailey and I went on up to our little arena to rope the Hot Heels, and out of the blue, here came Britt. First, he kicked me off the 4-wheeler so he could drive the steer around. Next, he kicked Brady off Alvin and roped the dummy himself! It was fun and funny and cute all at the same time. He has a little cowboy in him, whether he likes it or not. 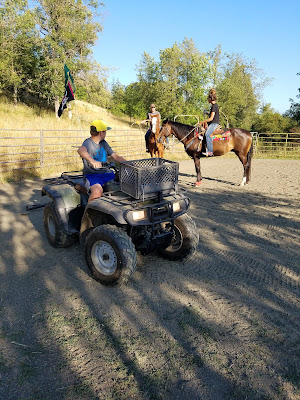 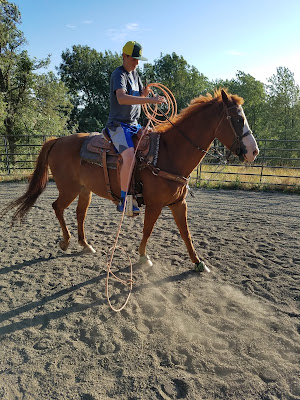 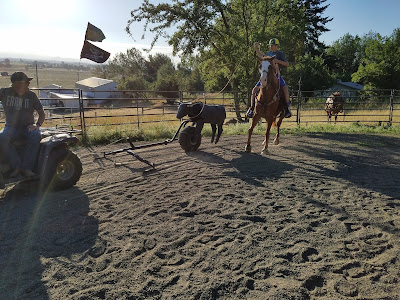 I took this cool panoramic picture on my phone. We go down to a big arena near our house every day that we can and Brailey exercises her horses. She has improved so much in her riding. One day she decided to make a little barrel run on Tex. She and Tex have a rocky past - he is not a horse for a beginner. This time, much to Tex's surprise, she rode the hair off him! In fact, she rode him in all the events last weekend at the gaming show and just rode Mater in the barrels and poles. 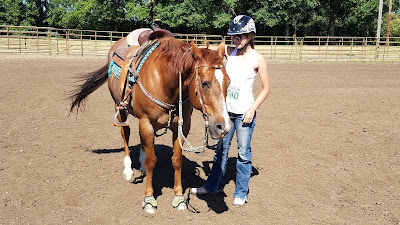 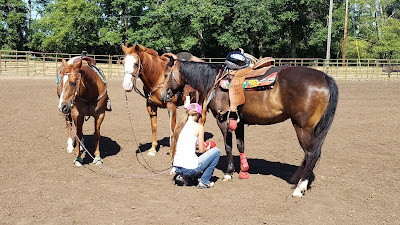 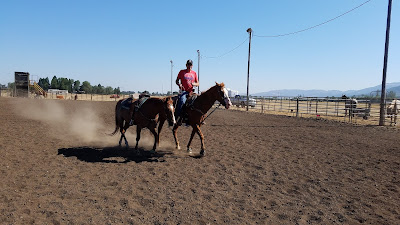 I love this picture of Brailey getting on Mater. I think her splits in dance have helped her riding. More flexibility in the hips, for sure! 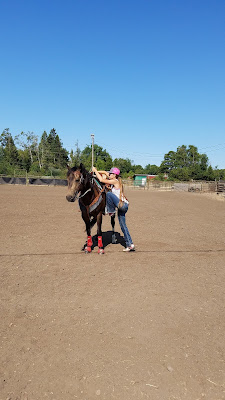 One night Brady and I went on a little trail ride together, just the two of us. I think it is the first time we have ever done that. (See my shadow taking his picture?) We usually have one of the kiddos with us. It was so nice! As our B's grow up and get more independent, it has been fun for Brady and I to spend quality time together. He is still my best friend, after all these years. I'm so glad he is mine! He still makes my heart skip a beat. 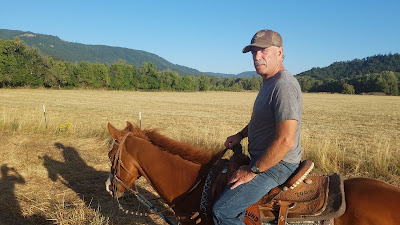 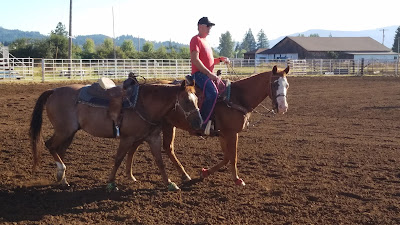 The gaming show was in Cottage Grove. Brady and Alvin were the stars of the day! It was the first time they had done all of the events, and they were amazing! I couldn't believe how well they did, but I shouldn't have been surprised. One of our friends, Barb Reynolds, said, "Not too bad for an old bronc rider!" It was super fun to watch him. Britt got a little nervous for him in the poles and said to me, "Man, I'm actually nervous for Dad. I hope he knows what to do!"It was also the first time for Brailey riding Tex in two years, and they did pretty darn well for not practicing. She had an incredible barrel run, but she was so excited she made it around all the barrels (Tex is famous for ducking on her), she forgot to ride him on the way home, and Tex got her at the line. But she learned from that mistake and she is excited to ride him again. 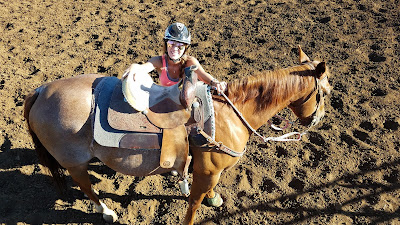 Britt was a trooper. He and I were the "film crew." He videoed all the events on his phone and really enjoyed doing it. He also enjoyed visiting with us. He's such a fun kid! It was a long, dusty day, and he made it more bearable with his humor and antics. 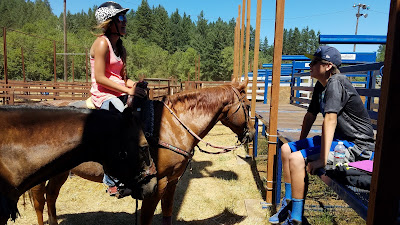 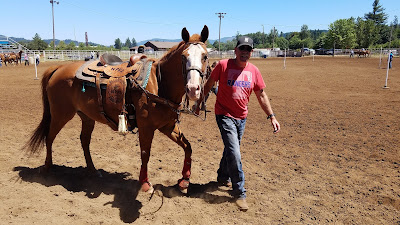 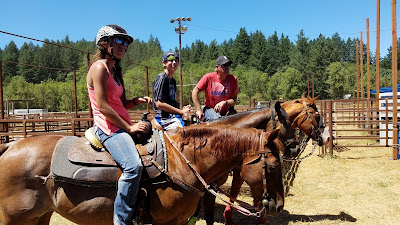 And once again, Britt just couldn't help himself - he got on Mater and Alvin a couple of times. Yet he doesn't like to ride. Mmmm-hmmmm. It was fun to see. I think he would have liked to have been entered in the show, truth be told. If only he and Brady could share Alvin. Brady said we could just tell them Alvin is Chipmunk. "Oh no, this isn't Alvin, this is Chipmunk!" We laughed so hard over that one! 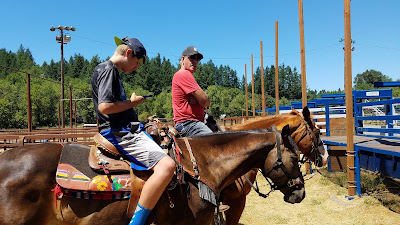 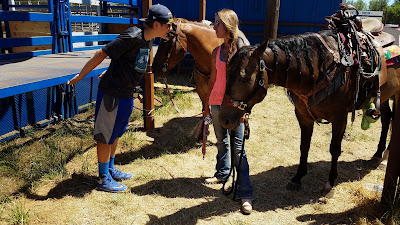 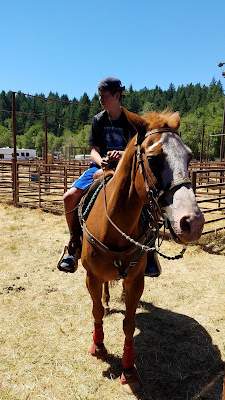 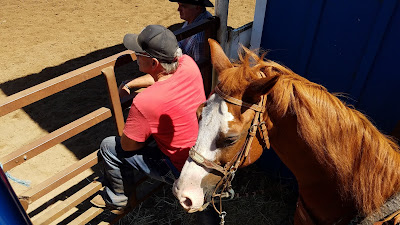 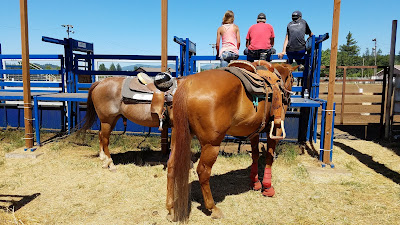 On Sunday, we took Brailey and Mater to a barrel race. She did great! They aren't running full speed, yet, but they are getting closer to it. She is so ready to run him and has no fear. We are very proud of her for her dedication in riding every day and taking great care of her horses. Eventually, all her hard work will pay off. In the meantime, the summer of horses continues! 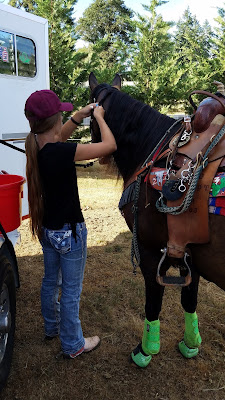